When Wizard Works announced, a full year ago, that it would occupy the Third Ward brewery and taproom being vacated by Broken Bat, the beer scene in Brew City was mashing it up. Who could've guessed that by the time the brewery was ready to open, a global pandemic would stand in the way?

When Wizard Works Brewing announced, a full year ago, that it would slip in and occupy the Third Ward brewery and taproom being vacated by Broken Bat, the beer scene in Brew City was mashing it up.

So, who could’ve guessed that by the time the young brewery was ready to open, a global pandemic would stand in the way?

Certainly not Jenny Higgins and Chris Ivanovich, who own the brewery on the lower level at 231 E. Buffalo St.

"In all the prep we did leading up to our original opening date of April 1, we discussed ‘worst case scenarios’," says Higgins. "Never did we imagine something like this, and we mentioned some crazy stuff."

And they got all their ducks in a row, says Higgins.

"Chris got into home-brewing when he was in college," she says. "It was his dream to have his own place ‘someday.’ Before we met, I was just a beer enthusiast. As time passes, there comes a time when "some day" becomes "now or never.’

"We participated in the Barley to Barrel brewery incubator program, got to know a bunch of local brewers and prepared to make the dream a reality."

Though Wizard Works takes its name and theme from Ivanovich’s 40 years as a performing magician (that’s only slightly more experience than Wizard Works has experience in brewing), the brews the team makes are not mysterious.

These are not quirky, frou frou beers aimed only at connoisseurs. 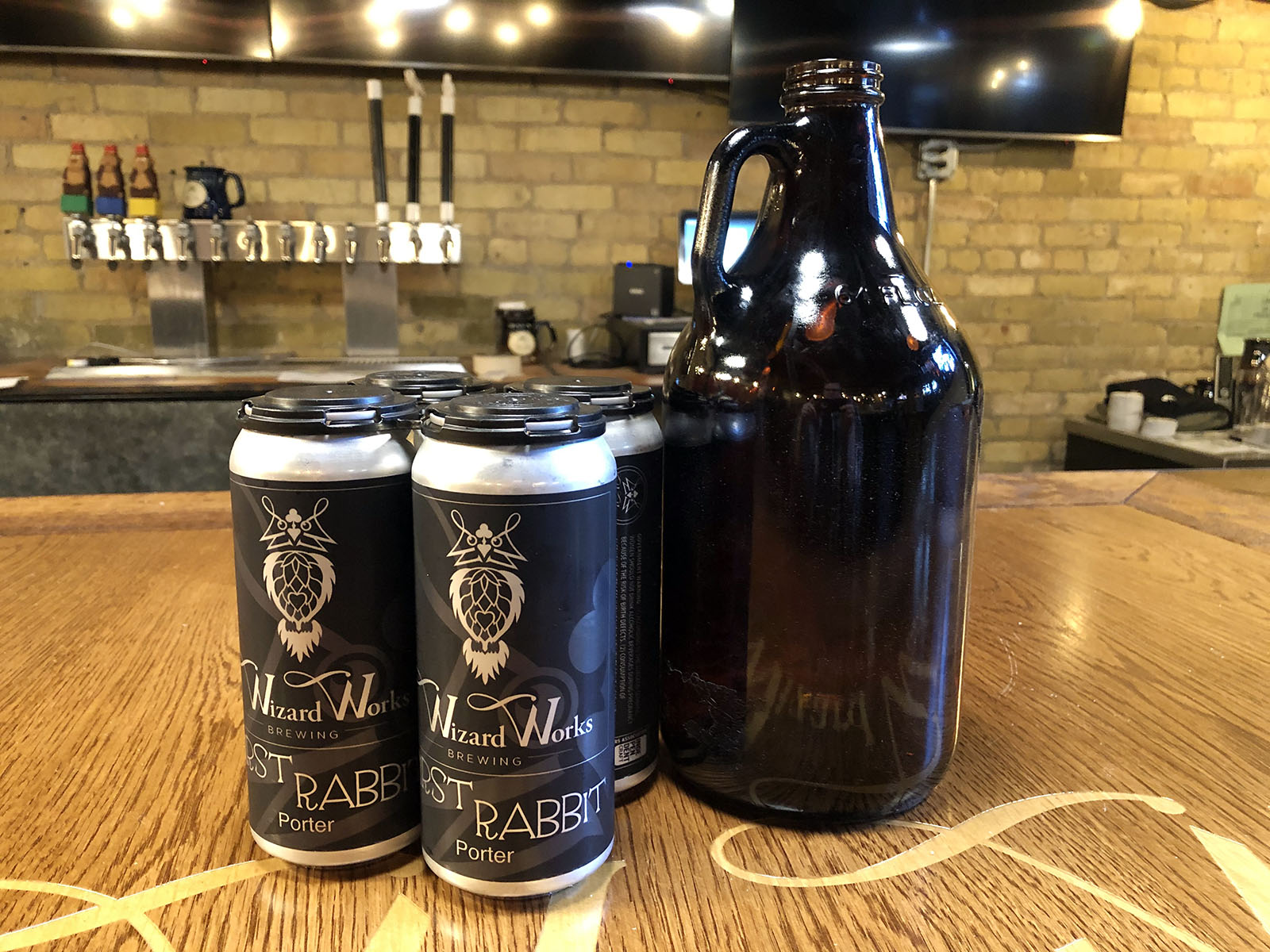 There First Rabbit (as in "out of the hat") Porter, Abracadabra IPA, Legerdemain Sessions IPA and the like.

"We like to brew beer according to traditional styles," says Higgins. "Our primary focus is delicious, beer flavored beer."

And it seems to be working. Legerdemain has been available at Crossroads Collective since the beginning of May and on April 24, the taproom opened for carryout sales of four-pack cans and for growler fills.

The response was so good that by the following day, they had to post on Facebook that they’d sold out of cans completely.

That’s since been rectified and you can again purchase, cans, fill growlers, buy empty growlers and swag at the brewery.

"We had to change gears a bit," Higgins says. "We planned on taproom sales, and doing crowlers to go. When Safer at Home was put into place, Broken Bat very graciously helped us out with some canning while we waited for growlers to be delivered."

At the moment Wizard Works has six beers on tap for growlers and cans, while supplies last.

Curbside pickup is coming soon, Higgins says, but in the meantime, customers can come inside – in a socially distant fashion – to make to-go purchases, mainly on Saturdays and Sundays from noon until 4 p.m.

"People have been coming in," she says. "We keep the hours, and beer descriptions on the Facebook page updated, and post on Instagram, but it has been a lot of word of mouth.

"Personally, I would love to safely open for more than to-go orders by mid-June, (but) we still don’t know what that will look like, since the guidelines are evolving.

"We will be ready to go, however we can, as soon as they say we can open the doors."

And how are they surviving as owners of a fledgling small business during these uncertain times?

"Hope gets us up in the morning," says Higgins, "terrified keeps us ready for whatever comes next. Optimism carries us through."

If you enjoyed this, check out my story on the new Broken Bat Brewery opening.