Welcome to Wonderland: A sneak peek at Riverwest's newest eatery

A brand new Riverwest eatery is slated to bring new life - and plenty of from-scratch comfort fare - to the former West Bank Cafe in Riverwest.

Wonderland is now open in Milwaukee's Riverwest neighborhood. We'll go visit for a taste of the menu soon, but in the meantime ... here is what to expect when you visit.

Its name is Wonderland, and according to owner Don Krause, the all-day cafe should make its debut by the end of September. 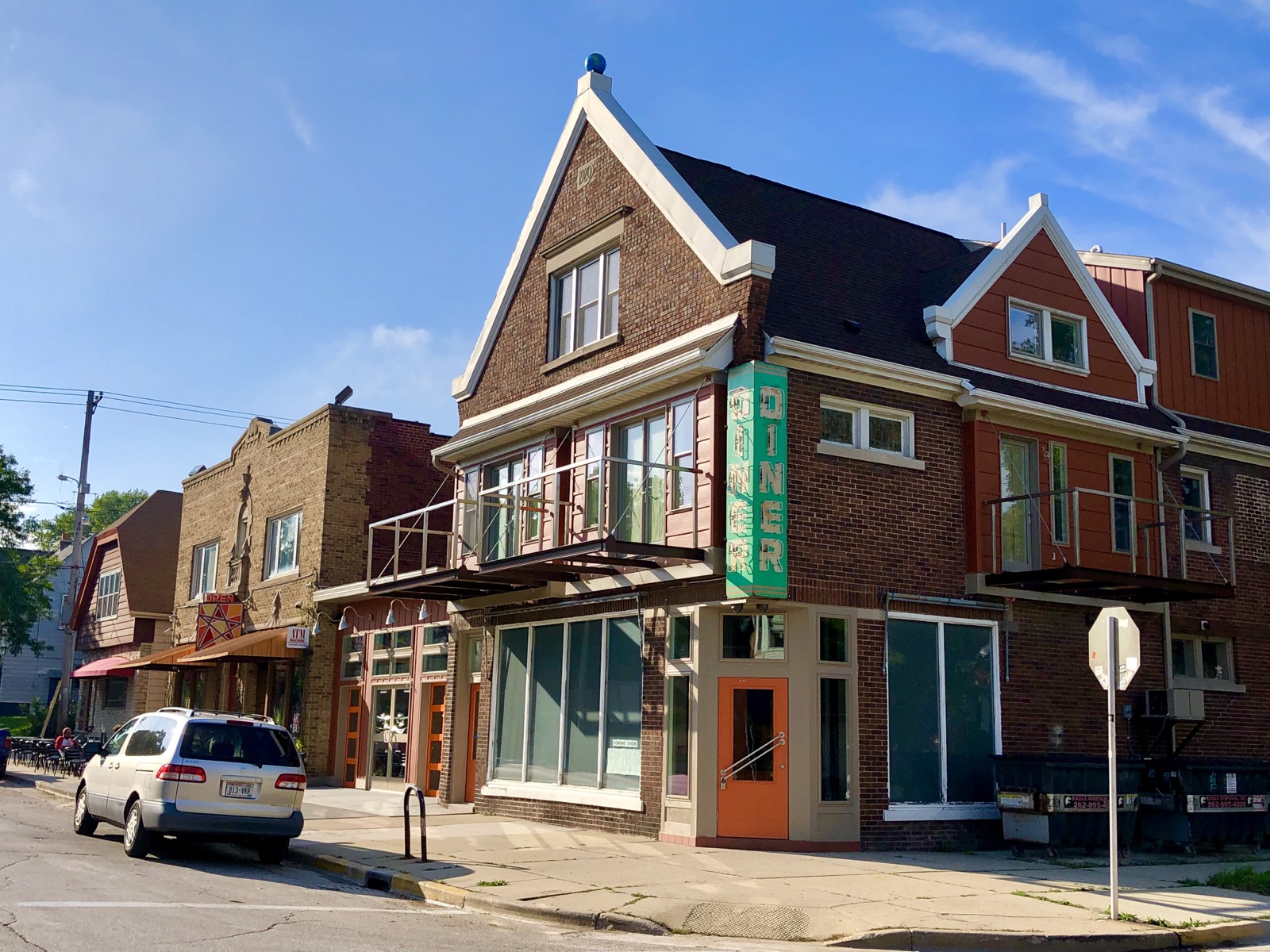 What's in a name?

The new venue – which embodies the spirit of both an urban cafe and what Krause calls a modern "craft" diner – is aptly named for a short-lived amusement park operated in East Milwaukee (now Shorewood) between the Milwaukee River and Oakland Avenue on land which is now Hubbard Park. The destination, which operated from 1905 to 1909 was part of a succession of amusement parks on the 7-acre site, which included Zwietusch's Mineral Springs (1873), Coney Island (1900) and Ravenna (1909).

In its heyday, the park played host to a variety of amusements including beer gardens, a Ferris wheel, a giant water slide and a tower covered with electric lights from which daring folk could jump onto a trampoline below. Patrons arrived at the park largely via the suburban railroad and later via the street car. Today an historic marker on Oakland Avenue near William Ho’s pays homage to the site.

And Wonderland, the restaurant, will function as the same sort of escape, says Krause, a place to escape the grind and enjoy a meal of comfort food favorites for breakfast, lunch or dinner.

The wonders of Wonderland

Krause, who also owns two adjacent properties (Art Bar, 722 E Burleigh St. and Two, the cocktail bar at 718 E Burleigh St.), purchased the building in May of 2015 and has spent four long years rehabbing the 100-year-old property, which had suffered from serious neglect.

"The building was caving in on itself," he says. "At one point we had to prop everything up. We started with the foundation and worked our way up. The goal was to rehab it in such a way that it can remain a restaurant for another 100 years."

Walk into Wonderland and you’ll find an aesthetic that encompasses what Krause describes as urban cottage meets steam punk meets modernism. And there’s a touch of classic diner for good measure.

Every element in the restaurant has a story, notes Krause, who worked for years as an interior designer before giving up the life 15 years ago to open Art Bar.

Diner style tables sit astride Italian-made chairs with sturdy red wooden seats and backs. Both were upcycled from a former restaurant in Atlanta, Georgia. Above them hang a diner staple: rare 1950s vintage UFO lights. 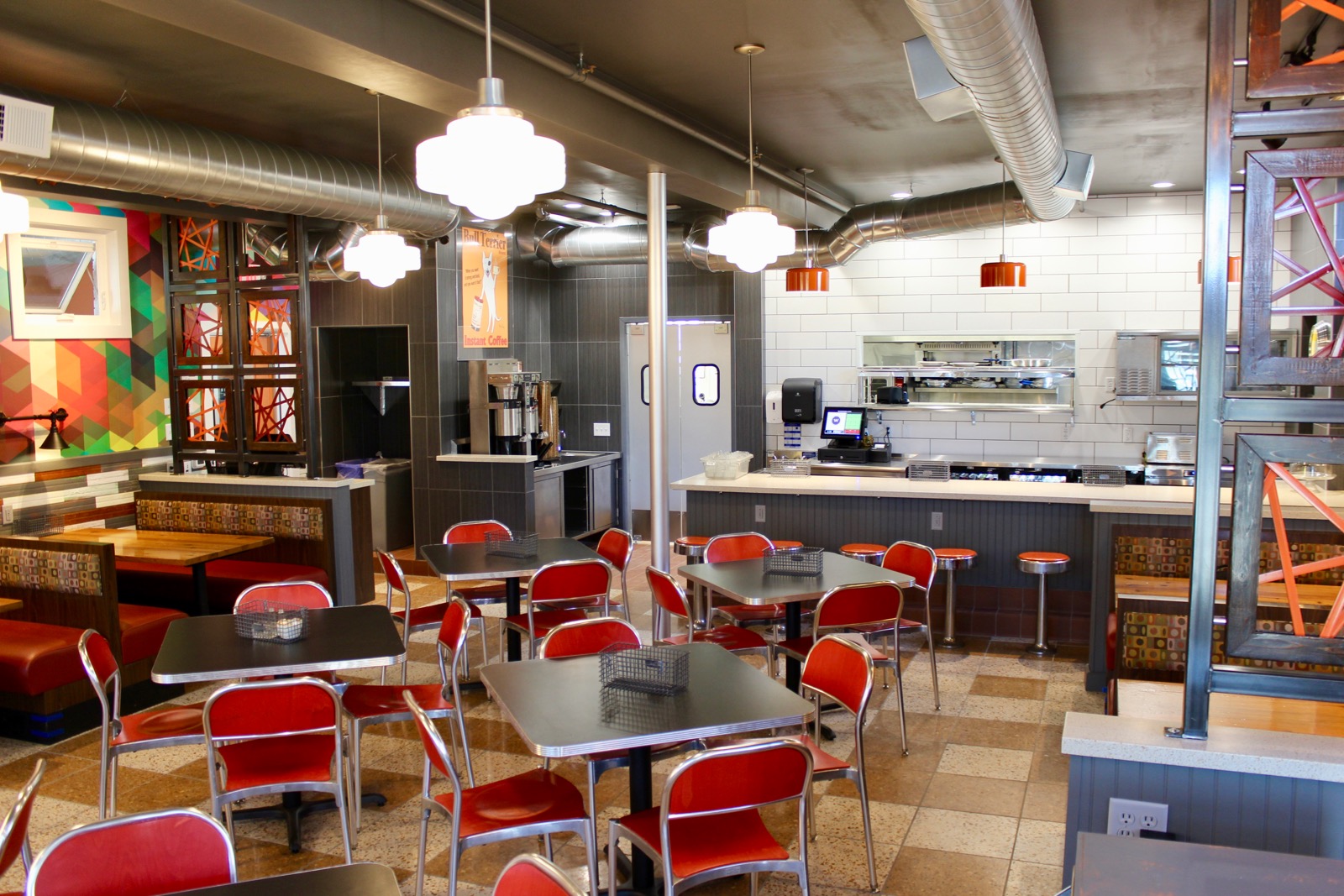 The lunch counter along the back of the restaurant features vintage stools repurposed from an ice cream parlor in Wausau. Their vinyl upholstery is (remarkably) original. In fact, Krause says he didn’t know it was there until he removed one of the stool’s former cow-patterned upholstery (along with "zillions of staples") and found the pristine rust-red vinyl underneath. 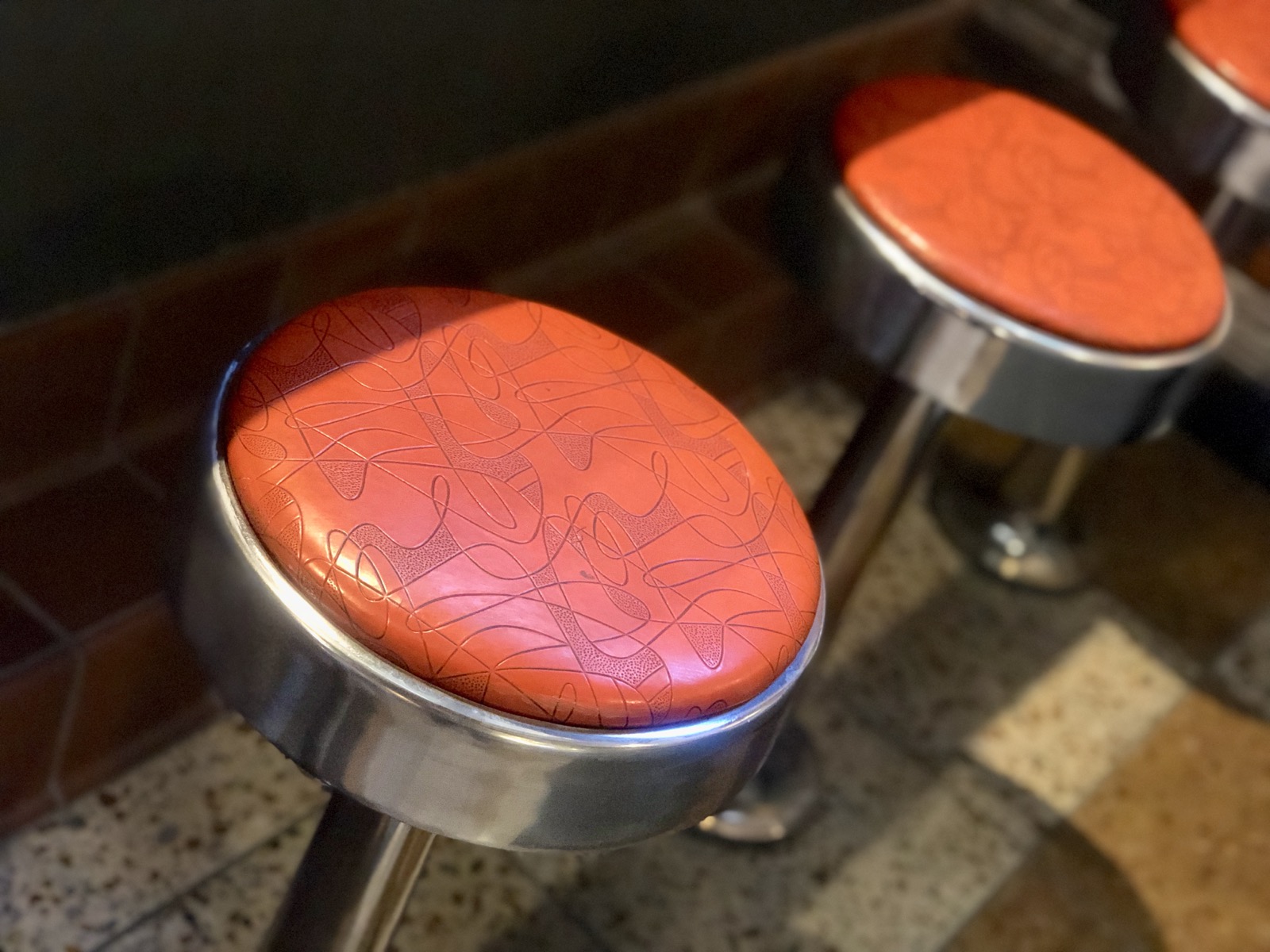 The wooden booths and rustic tables on either side of the restaurant were repurposed from a venue in Memphis, Tennessee. On the western side of the room, they’re positioned against a multi-colored geometric patterned wall. Above one side, there's  a cabinet filled with an assortment of vintage glassware which Krause says "tells a nostalgia story of when things were beautiful and simple." Vintage copperware hang above the booths, lending a homespun feel. 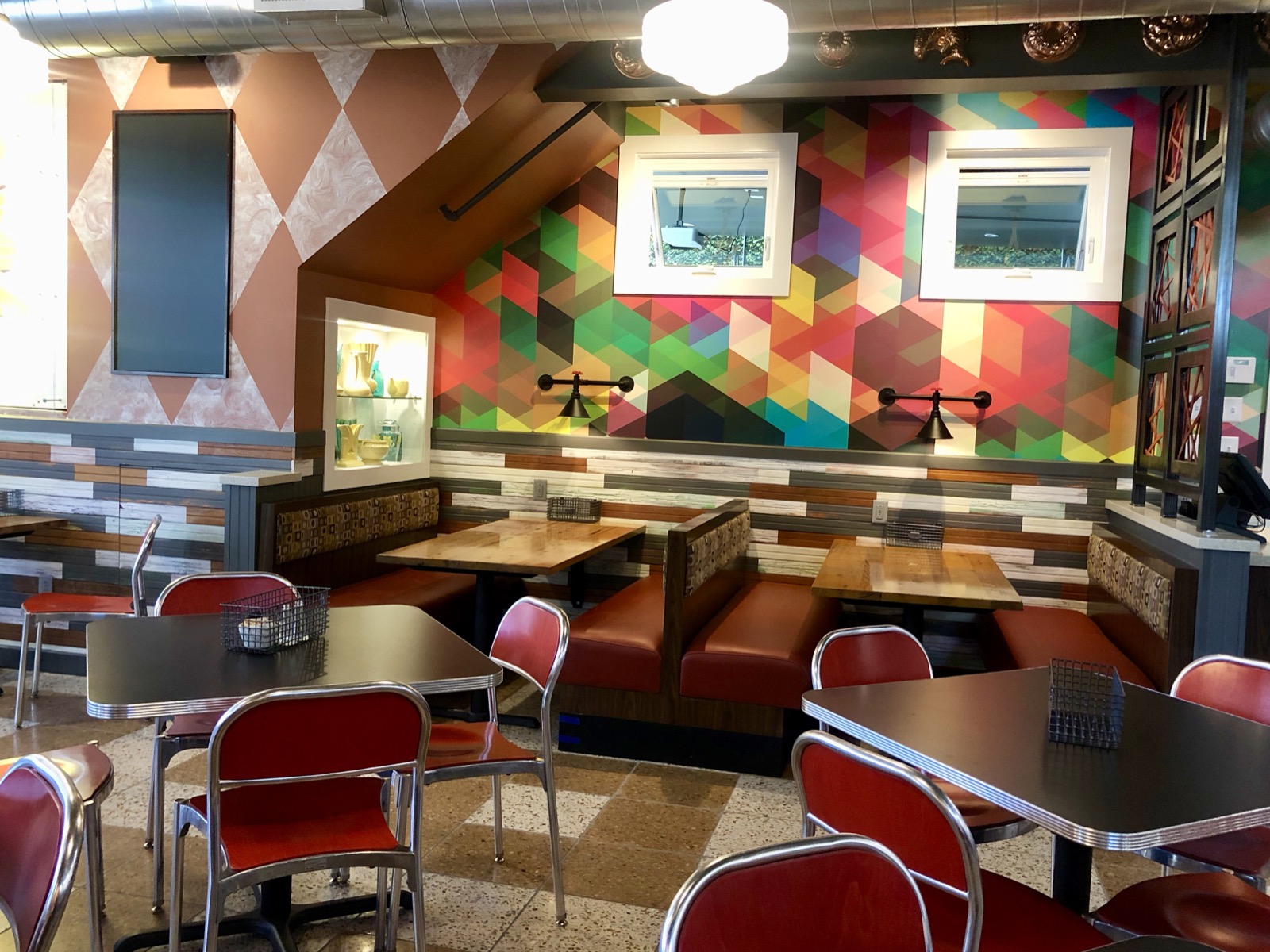 On the other side of the room, booths are flanked by the image of a sunlit forest smattered with a carpet of pink flowers. "It reminds me of hiking in Kern Park during the spring, says Krause. 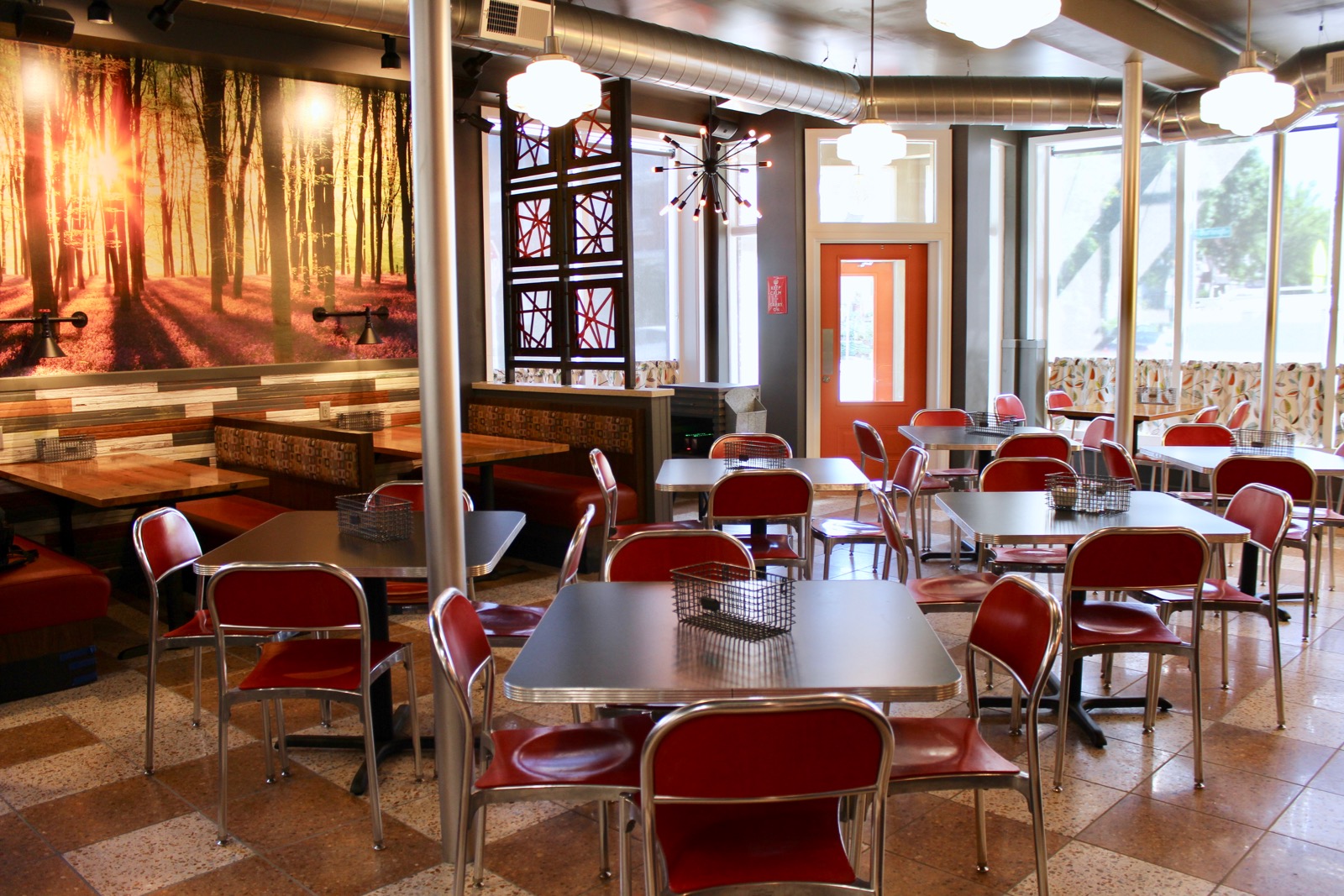 The photo-mural is juxtaposed against upcycled wainscoting from the former West Bank Cafe which Krause painstakingly painted in his driveway to create a modern cottage feel.

Even the terrazzo tiled flooring has a story. It’s made from materials normally used in poolscaping, and it’s cemented directly into the floor.

"It’s supposed to look like it’s been here forever," says Krause. "And it will last forever," an asset for a high traffic area that might otherwise suffer wear and tear in a few short years.

Look around and your eyes will be greeted with details, from decorative metal screens which pay homage to Art Bar’s star motif, and a Sputnik chandelier which hearkens back to the hey-day of space exploration. 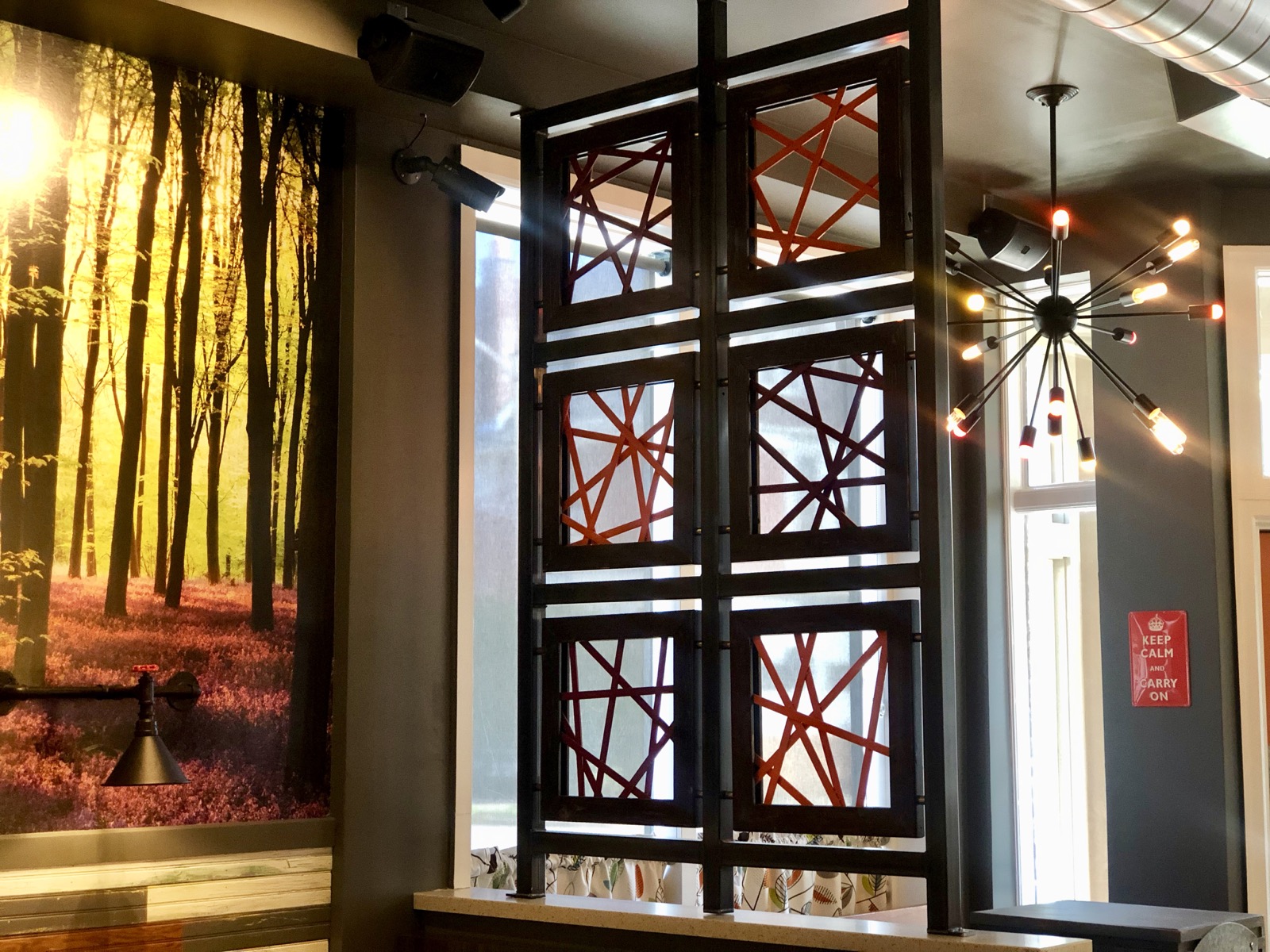 The focal point of the room is a pop-culture piece depicting Elsie the Cow, the 1930s vintage mascot of the Borden Dairy Company lit in neon. It was created by an artist in Massachusetts known for his modern interpretations of vintage signage. "The piece is 10 inches deep," says Krause, "So we literally built the wall around it." 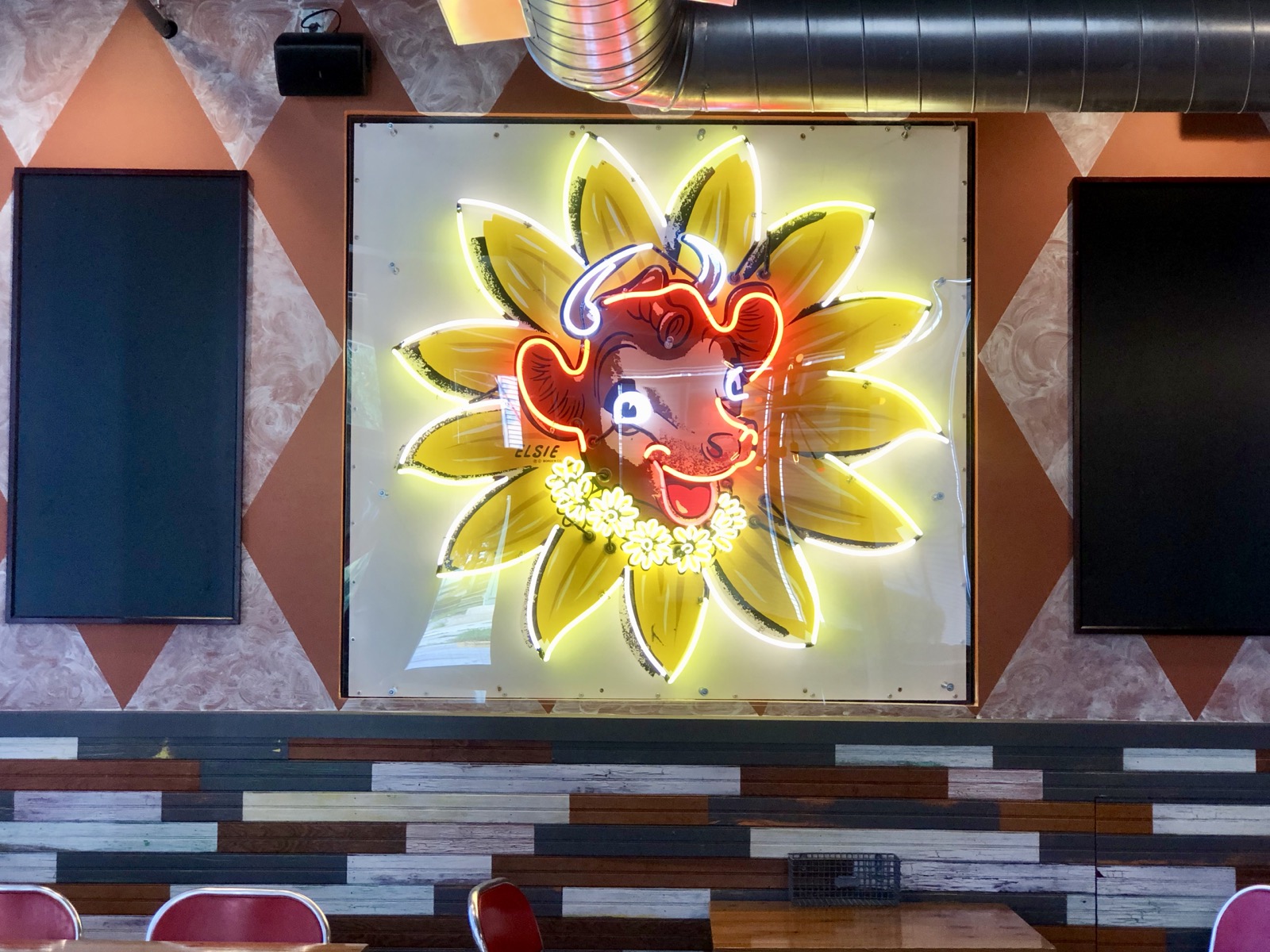 The arts and crafts style curtains that don the front windows offer warmth and coziness along with creating a division between diners and the world outside. They hang neatly above the waiting bench just near the front door, another repurposed piece from West Bank Cafe. 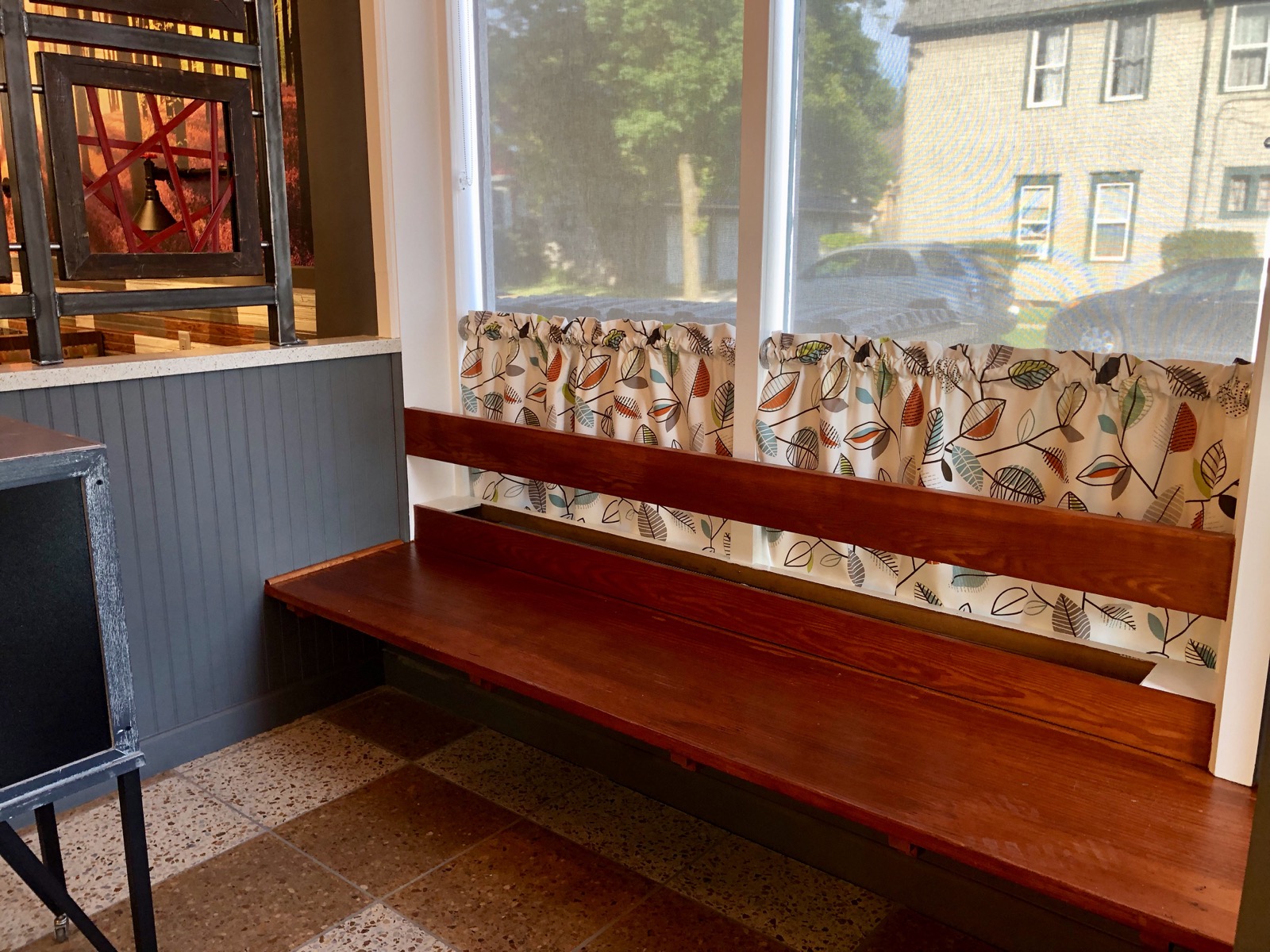 But that’s not all.  Take the pass-through to the West and you’ll find yourself in The Breezeway, a dining area which was once little more than the alley between Wonderland and Art Bar.

"Originally, we thought we wanted an outdoor courtyard," says Krause. "But the more we thought about it, the more we realized that it wouldn’t get more than a few months use during the year. So we decided we wanted to create a room that could accommodate additional dining, as well as events." 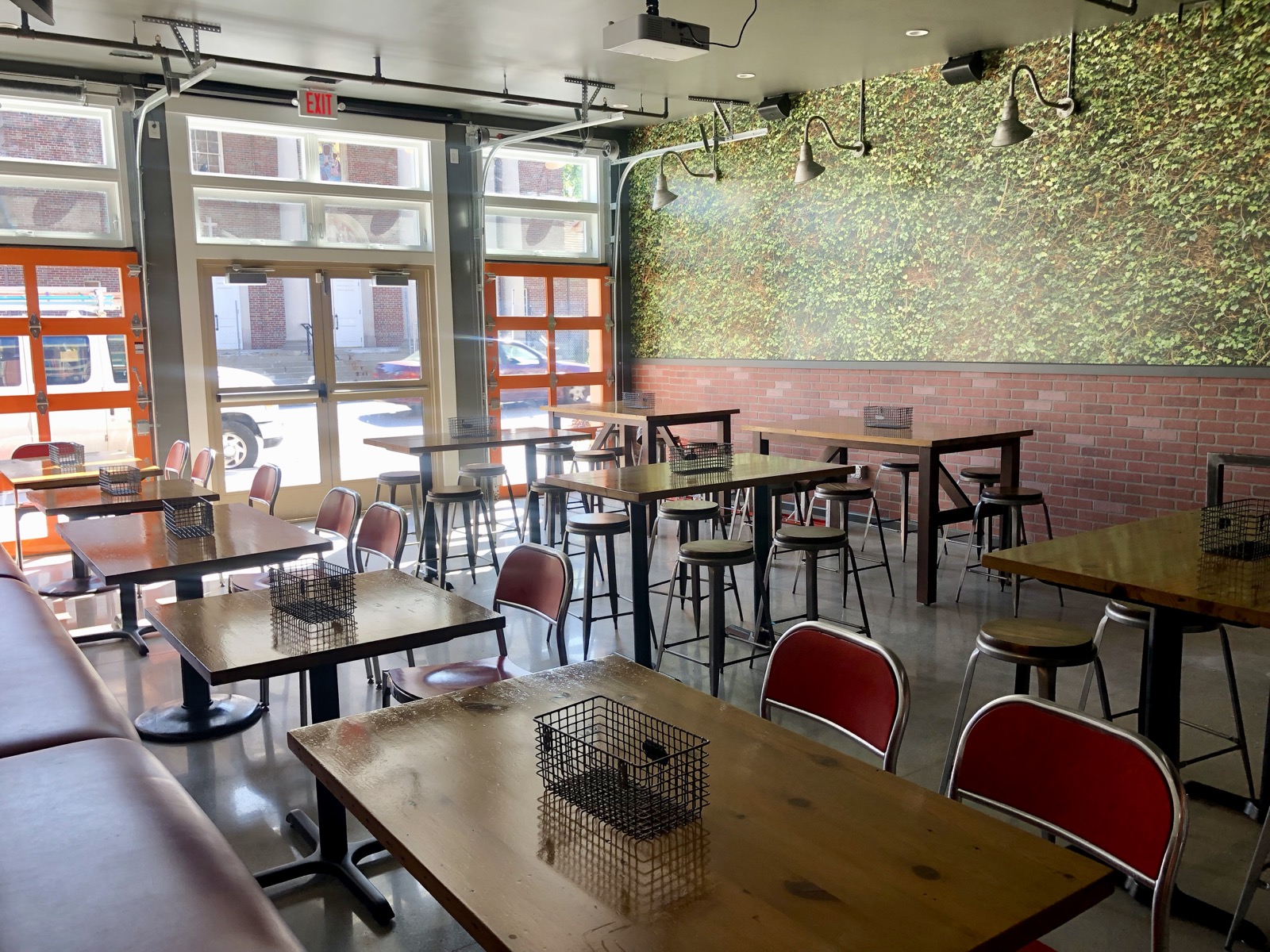 In lieu of actually being out-of-doors, the 50-60 seat room features two operational garage doors which can be opened to the sidewalk. 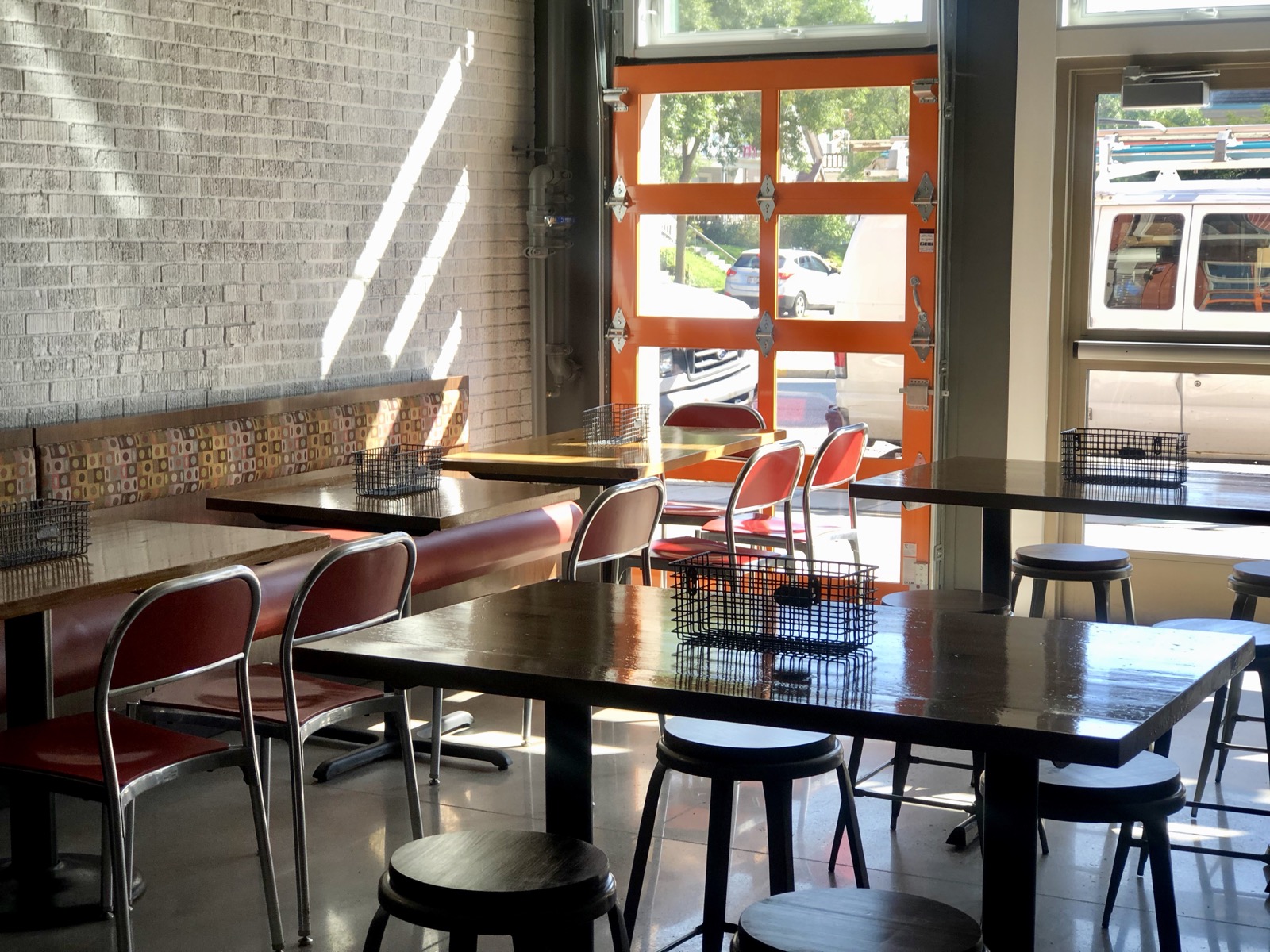 Meanwhile, the west wall features multicolored brick and 24 pictorial wall panels bearing the image of trailing ivy. The photo itself was taken in Switzerland, processed in Germany and mounted on tiles that Krause painstakingly hung himself. Eventually, he says, the wall will also display a variety of photographs of the Wonderland amusement park.

The menu for Wonderland is currently in the R&D phase, but it will include comfort food favorites, including classic breakfast items, sandwiches, salads and entrees.

And yes, you can call Wonderland a "diner," but Krause says the menu won’t be confined to diner staples.

"We are reserving the right to exercise way more freedom with the menu than the term ‘diner’ implies," he says, noting that the kitchen will be making nearly every item from scratch, including biscuits, sauces, housemade breakfast sausage and freshly baked pies.

"To do things the way we want, we have to go back to the way food used to be prepared before modern convenience gave restaurants an excuse to serve things like canned hollandaise. It costs more and it takes longer; but it tastes better... and that’s the reward."

By Krause’s side is Nick Westfahl, an industry veteran who worked as manager at Comet Cafe for two decades and veteran chef Matt Mudler, whose experience includes work at Comet, Company Brewing and more recently Fuel Cafe on 5th.

"They inspire me," Krause says. "And they’re industry pros. They hired 45 people for Wonderland in three weeks… people are really excited to be a part of this."

Most menu items will fall in an affordable $8-12 range, he says, noting that he doesn’t foresee anything – even entrees – getting too close to the $20 mark. And options will include a menu of core items, along with daily and seasonal specials.

"The goal is to tap into the kitchen’s creativity," he says. "And really give them the freedom to go with their inspiration."

Options will include breakfast classics like housemade biscuits and gravy, pancakes, waffles, Benedicts and omelets.

Lunch and dinner menus will include appetizers like poutine, artichoke dip and spicy cauliflower along with housemade soups, salads and a variety of sandwiches, a good variety of which will cater to vegetarian and vegan diners.

"We’ll have a great two-fister drive-in style burger," he says. "And a housemade lentil veggie burger that tastes great and isn’t an afterthought."

Entrees might include items like meatloaf, salmon and macaroni and cheese. And Krause says there will be a Friday night fish fry and a full bar menu created in collaboration with Art Bar.