Exploring the wonders at Wonderland in Riverwest

Currently, the Wonderland menu is slightly abbreviated, allowing for the kitchen to settle into a rhythm. But there's still plenty from which to choose for both breakfast and lunch, all at impressively reasonable prices.

A few weeks ago, we gave you a preview of Wonderland, the brand new craft diner at 732 E. Burleigh St. in Riverwest, sharing owner Don Krause’s vision for the long-neglected building and offering a summary of the dishes that were likely to appear on the menu. Even then, we knew we’d want to get back as soon as we could to sample some of the new dishes.

At this point, the restaurant has been open for about a week; so it’s still streamlining various aspects of its operations. But our first visit over the lunch hour on Tuesday validated our suspicions that Wonderland is going to be a great addition to the Riverwest scene.

If you thought the restaurant looked great in our photo preview, you’re going to want to see it in action. After all, even the most beautiful of spaces only get warmer and more inviting when they’re augmented by the chatter and energy of real, breathing customers. 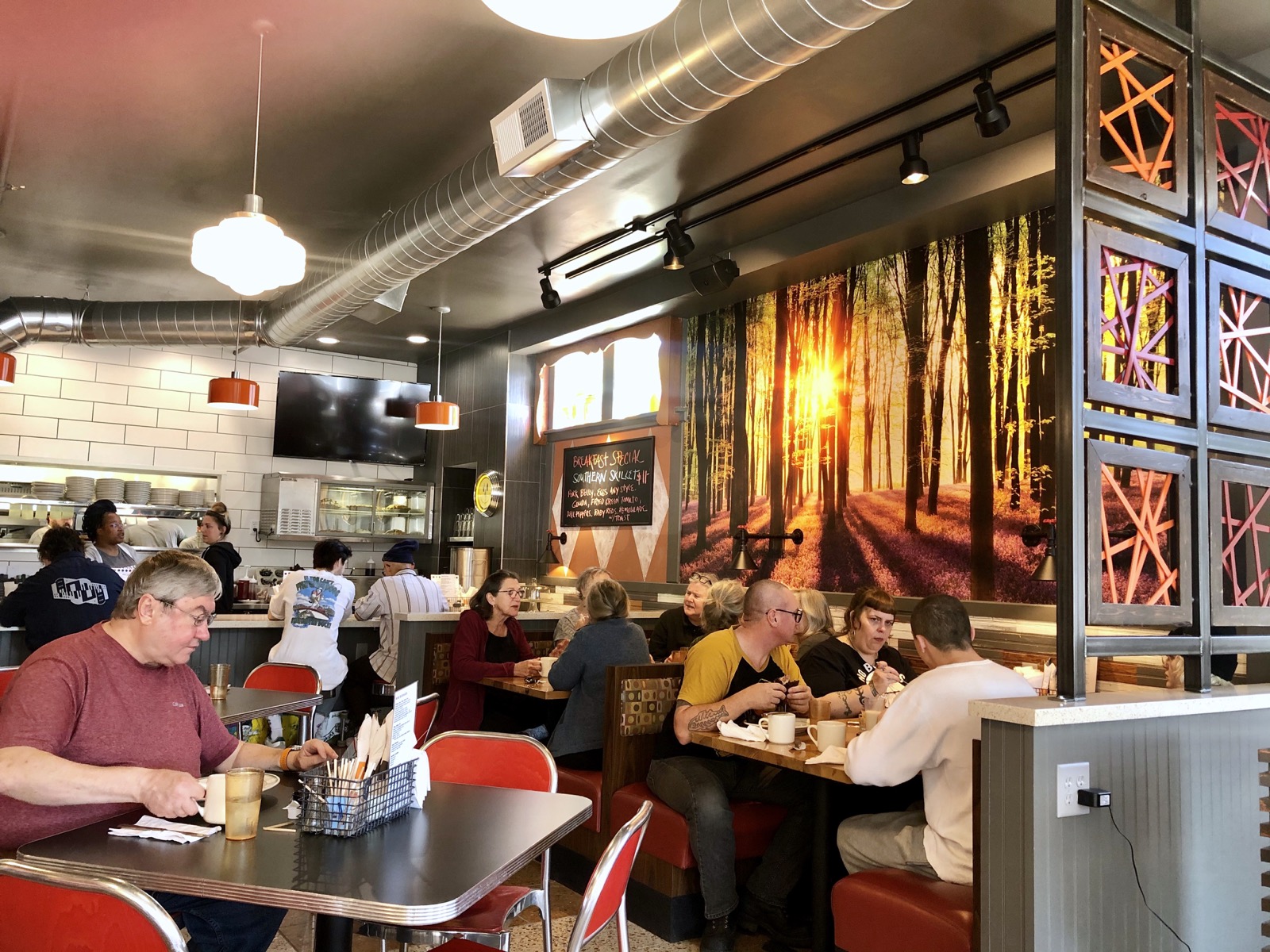 Currently, the Wonderland menu is slightly abbreviated, allowing for the kitchen to settle into a rhythm. But there’s still plenty from which to choose for both breakfast and lunch, all at impressively reasonable prices.

Choices include an eggs benedict with pulled ham and bearnaise ($11), a choice of two omelets ($10-11), biscuits with eggs and sausage gravy ($10) and Wonder Waffles, cornmeal waffles topped with toasted pecans, honey, caramelized apples and whipped cream ($9). I was impressed to see that, rather than providing a separate children’s menu, a variety of regular menu items are instead available with reduced portions and prices. A good variety of dishes are also offered with vegetarian and vegan options (sometimes for an upcharge).

Simple items like the Biscuit-A-Go-Go, a breakfast sandwich featuring scrambled eggs, sharp cheddar and onion jam in a housemade biscuit ($6) were nicely executed, showcasing a substantial and tasty biscuit with fillings that worked well together. We added bacon to our sandwich for an additional $3. And I’d be eager to try this sandwich with any one of the additional variations, including pulled ham, sausage or housemade lentil sausage. 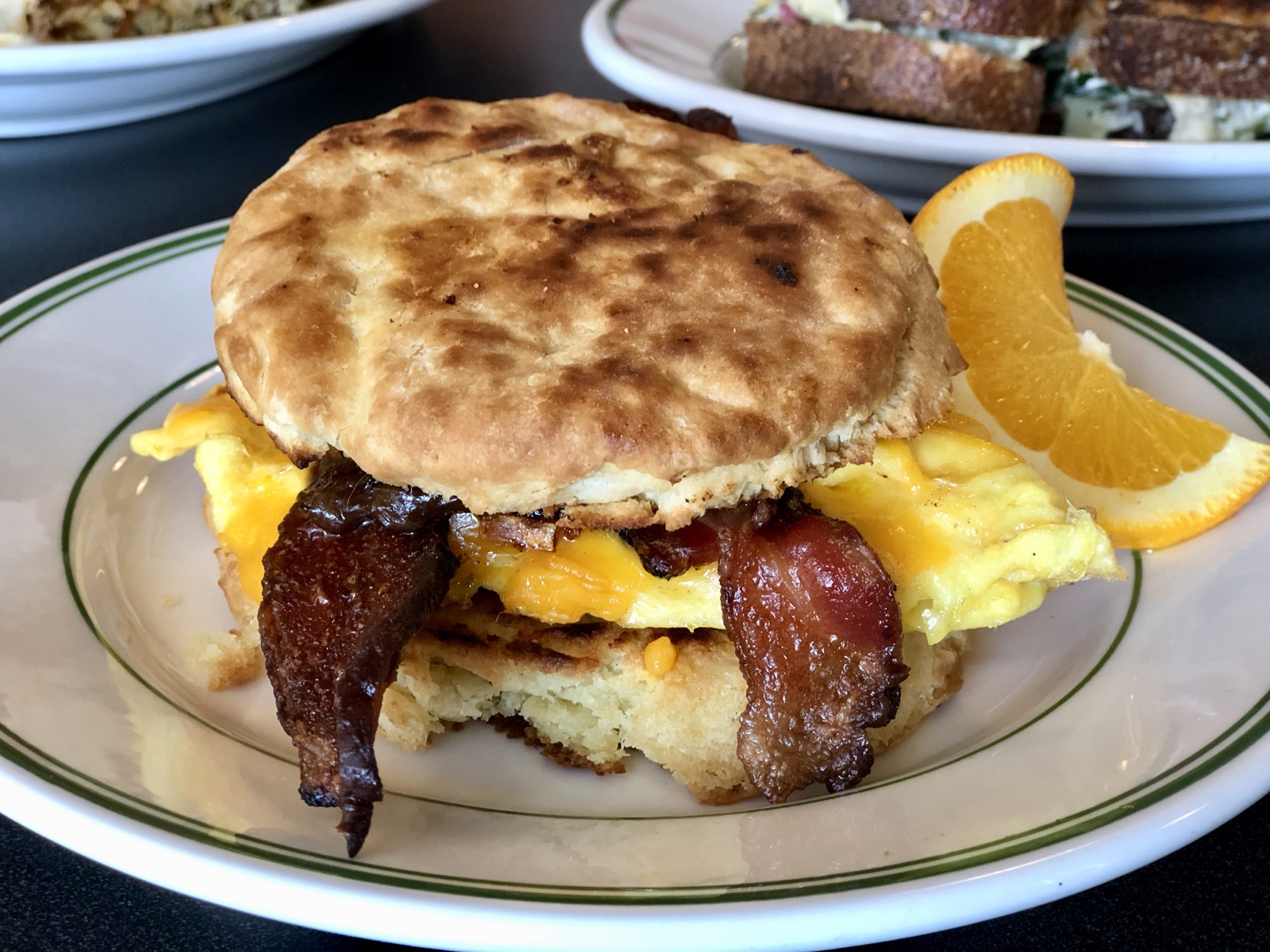 The chicken and waffles on the menu departed a bit from the usual, featuring two smaller, hand-sized cornmeal waffles along with crisp fried boneless chicken thighs. I appreciated the balance between the amount of chicken and the nicely textured waffles. And the addition of sausage gravy, jalapeno strings and sweet onion jam made the dish memorable ($13). 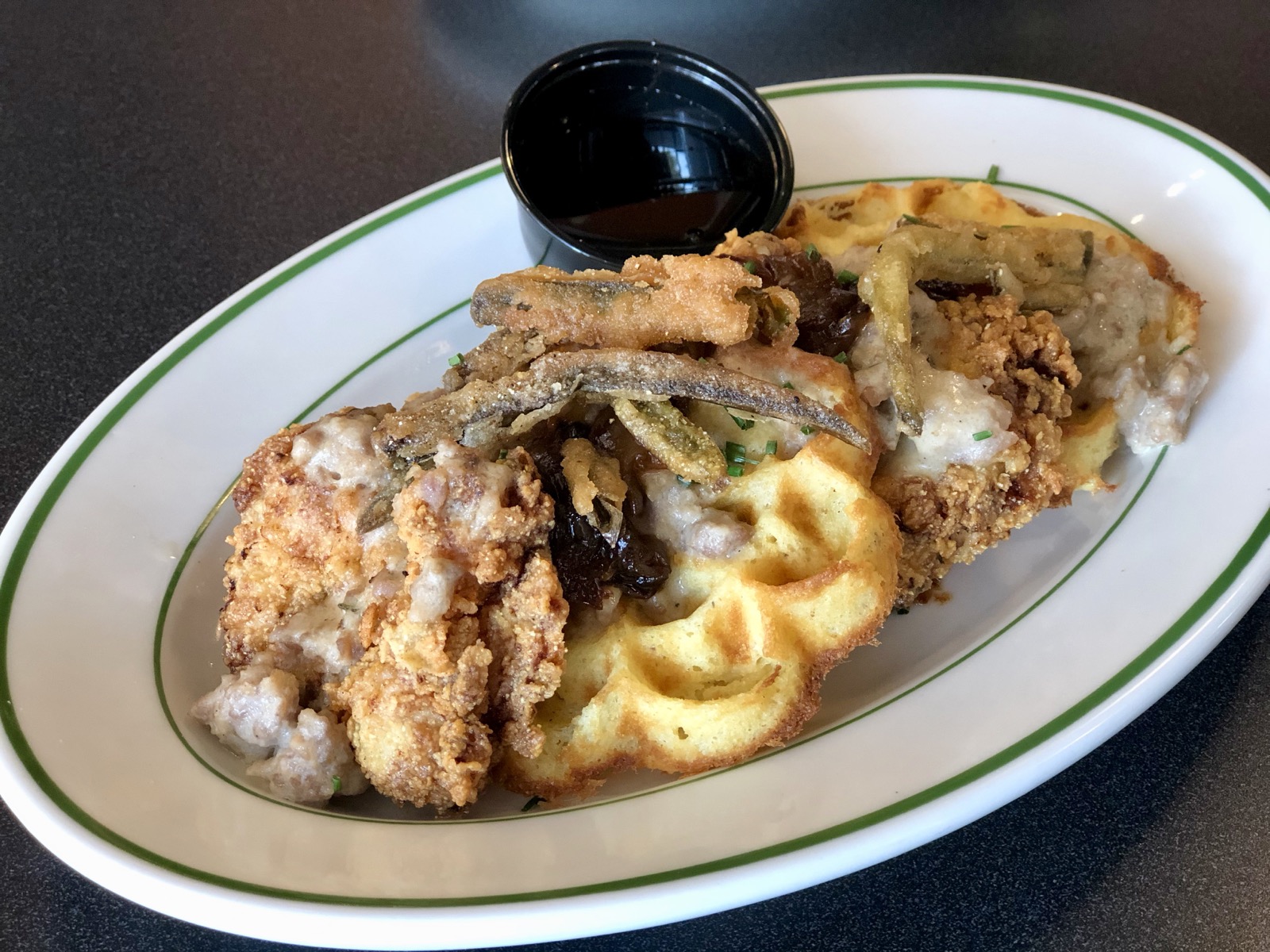 Meanwhile, a tasty breakfast burrito (which I’d gladly eat again for lunch) was filled with scrambled eggs, chorizo, chihuahua cheese, black bean corn salsa, hashbrowns and creamy Southwest lime dressing ($11). A side of tinga sauce provided additional flavor. And I was happy to see that the burrito could easily be made vegan with a substitution of tofu and soy chorizo. 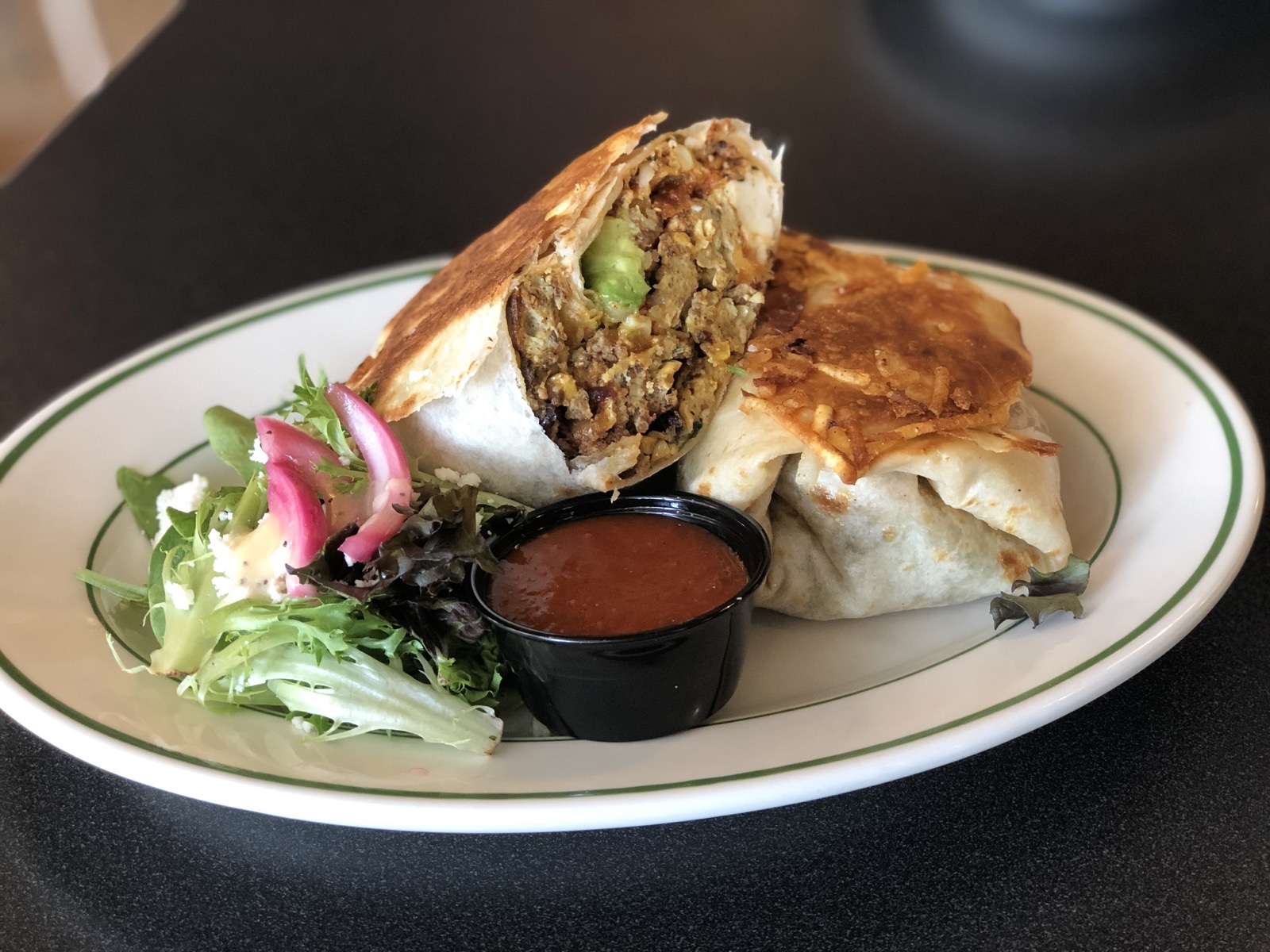 We also sampled the Art Bar Melt, a combination of artichoke hearts, herbed cream cheese, pickled red onions and spinach grilled on whole grain bread ($8, can also be made vegan). 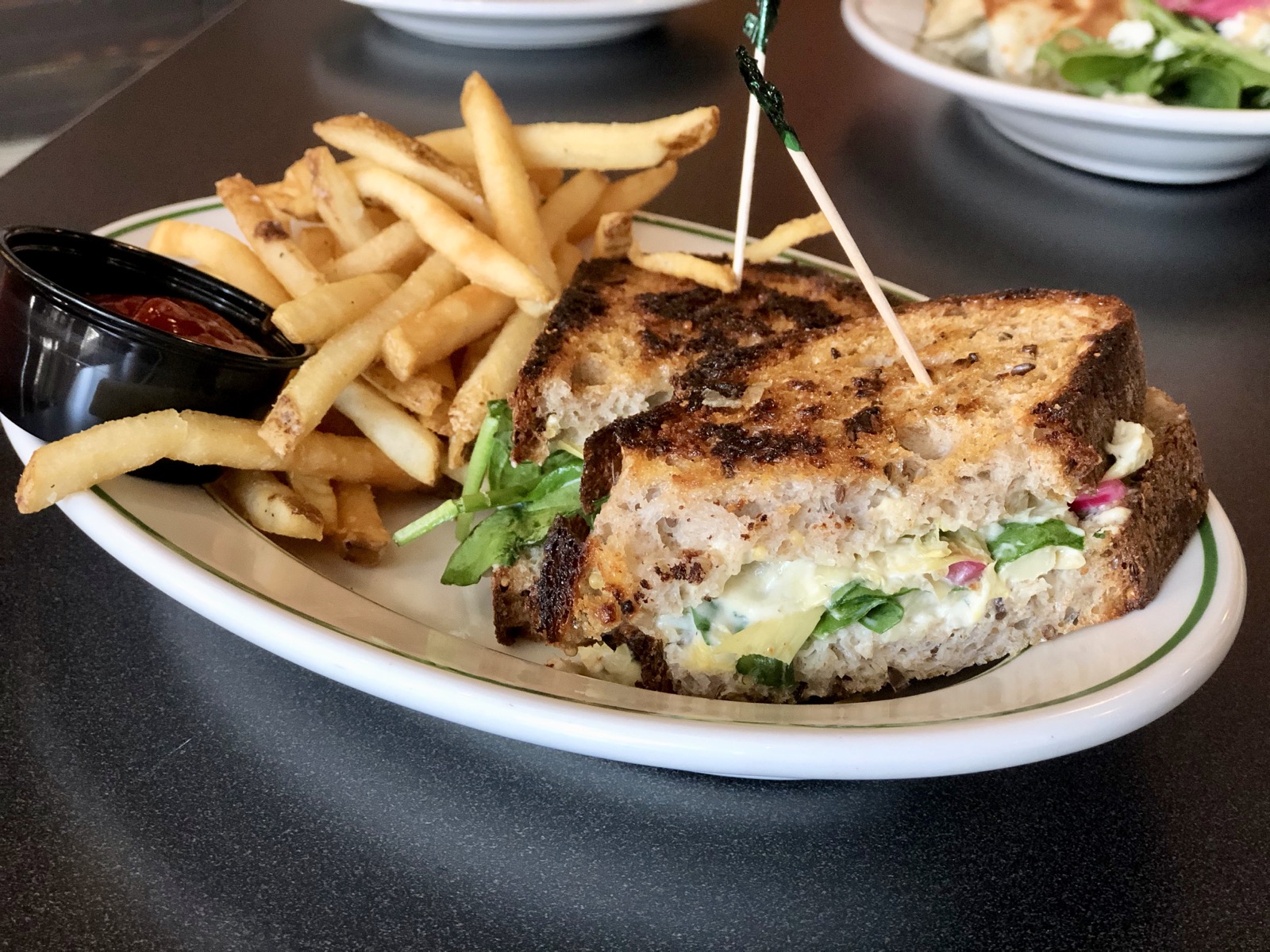 It was tasty and among a nice selection of sandwiches (served for both lunch and dinner) that ranged from a Cubano with pulled ham and pork belly ($11); to a housemade lentil patty with confited tomatoes, onion jam, arugula and herbed vegan cream cheese (vegan, $9); a fried green tomato sandwich with vegan cream cheese, onion jam, cucumbers and arugula ($9); and The Dream Burger featuring two one-third pound patties of beef with lettuce, tomatoes, onions, American cheese and savory butter on a toasted bun ($14).

And while we didn’t sample any appetizers or entrees (served from 3 to 10 p.m.), there are some tasty looking options there, too. There are snacks like loaded poutine ($9) and spicy cauliflower bites ($8) and housemade soups including roasted acorn squash bisque ($4.50/$6).

You can also find grain-based bowls and salad, along with housemade meatloaf with mashed potatoes, mushroom gravy and the vegetable of the day ($12); a turkey pot pie with biscuit topping ($13); the Totally Cheesy Trottole (mac & cheese) featuring a blend of four cheeses tossed with trottole pasta and topped with breadcrumbs and chives ($11; add bacon, pulled ham or pork belly for $3 and/or peas for $2).

Don't forget to check out the desserts! 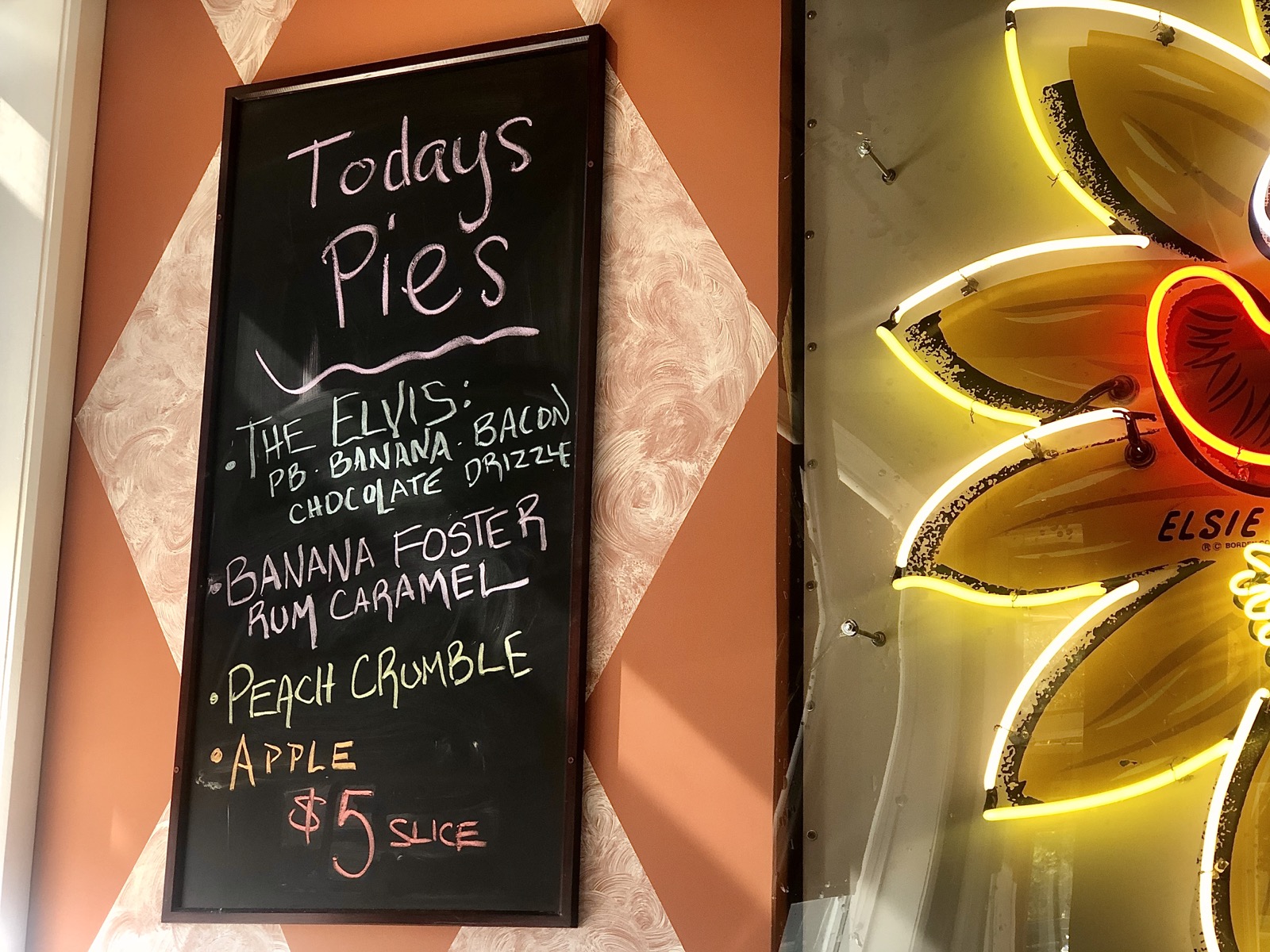