Miles Borghgraef is the sort of chef whose mind never really comes to rest. And it's one of the many reasons Milwaukee diners have good reason to look forward to his latest project, Birch + Butcher, a restaurant and butcher shop in the new North End development

Miles Borghgraef is the sort of chef whose mind never really comes to rest. "The second something is finished," he says. "All I can think about is what I can do differently – or better – the next time."

And it’s one of the many reasons Milwaukee diners have good reason to look forward to his latest project, Birch + Butcher, a restaurant and butcher shop slated to open this September in the North End's Denim Park development at 459 E. Pleasant St.

The restaurant is a collaboration between Borghgraef and his fiance Rebecca Zwiefelhofer, a real estate agent whose financial prowess prompts Borghgraef to describe her as "the brains behind the operation." But, it’s also a passion project for the ambitious young chef, who left his near-two-year post as chef de cuisine at Bartolotta’s Lake Park Bistro in late 2015 to open his first restaurant.

Originally, Borghgraef notes, he’d set his sights on a location in Bay View. However, even after rough renderings for the space were drawn up, he says he began to recognize that his vision for the superette-style retail shop and restaurant might be a stretch for the area. Around the same time, he received a fortuitous call from Barry Mandel, who invited him over to take a look at the new development.

"The growth in the area was just amazing," he says. "And it was literally the polar opposite of what we’d been looking at in terms of architecture. It was bright and lively and invigorating, and – in many ways – it was more of what we’d wanted all along. It was simply too good of an opportunity to pass up."

Located in one of Milwaukee’s most quickly developing areas, Birch + Butcher’s interior is as sleek and modern as can be. Its clean lines were the result of a collaborative vision between Borghgraef and Dan Beyer Architects, the firm behind venues including Third Space Brewing and the Bavarian Bierhaus. The space is bright, thanks to floor to ceiling windows on the North and East. And the interior reflects an industrial chic vibe that showcases natural materials set against tawny brown and pale blue accents. 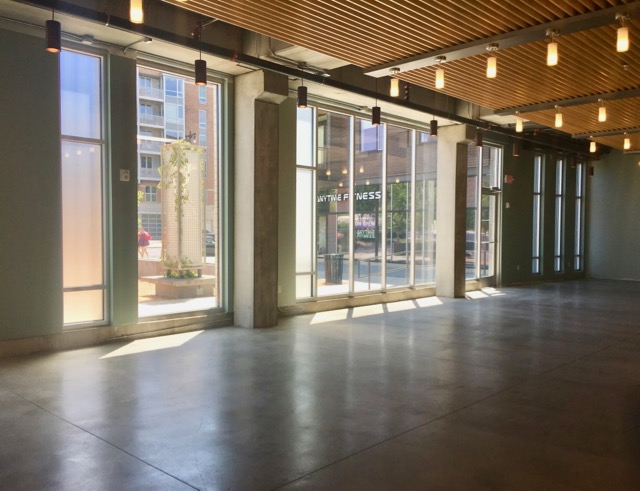 In the dining area, which will seat about 90, raw steel and finished Baltic birch plywood come together in a slatted drop ceiling augmented by modern light fixtures. Meanwhile, a back bar sports quartz countertops and porcelain tiled walls. The focal point lies in the restaurant’s open kitchen, which contains Milwaukee’s first open wood-burning hearth, a rustic element that belies a style of cooking and thinking about food that’s nearly as old as time.

In fact, at its very core, Birch + Butcher is a concept that’s simultaneously forward-thinking and primal. It’s a place where locally-sourced foods, including meat and farm-fresh vegetables, are treated with care and respect as their flavors are harnessed and concentrated through the power of fire.

"The confines are always where creativity is born," notes Borghgraef, who estimates that 60 to 75% of the menu will have contact with the wood-fired hearth. "Modern kitchens have so many tools that make cooking easy. But, strip all that away. You have a campfire and a dutch oven. What are you going to do?"

Adjacent to the restaurant will be a retail butcher shop, which Borghgraef says will be stocked with a variety of items, including charcuterie from Underground Meats in Madison, along with unique domestic cheeses, housemade sausages and a variety of fresh beef, pork, lamb and veal which will be butchered on site from whole animals that have been procured from quality producers in Wisconsin.

"Our beef will be dry aged for a minimum of 30 days. And we’ll stock things like porterhouse, filet mignon and skirt steak … things that people look for when they’re shopping a meat counter," says Borghgraef, noting that those same cuts are also the least sustainable (and often priciest) choices for a restaurant to serve.

"In a restaurant, it’s ideal if you can breakdown whole animals. But, it’s often very idealistic. Everyone wants the filet mignon from the steer; but, in the end, you have the rest of the steer as well. And when you only buy the filet, leaving the rest of the meat, that’s reflected in the pricing."

"At the same time," he goes on. "The old world butcher shop virtually doesn’t exist in this day and age. But, this model really enables both to exist … and to thrive."

Onsite butchers will service both the shop and the restaurant, cutting meats and making sausages for use in both venues.

Borghgraef says the restaurant and retail concepts are designed explicitly to support one another.

"From day to day, we both allow one another to exist," he says. "And because of the model, we’ll also be able to pass savings along to the consumer. None of this is about ‘How cheap can we make it?’ But, at the end of the day the perception of value is important to me. This allows me to make dishes that are both delicious and affordable."

In addition to reducing costs, Borghgraef says a commitment to both nose-to-tail cooking and local sourcing is more than good marketing.

"When you set these parameters, and you’re working with a whole animal," he says, "It makes it a necessity to bring some ingenuity to the table. And, in the end, it’s not about waving a big local flag. It’s about sourcing things as I want to source them. And it’s about maintaining a sense of quality and sustainability."

That ingenuity will be channeled into a hyper-seasonal dinner menu that showcases not only expertly prepared meats, but also a variety of vegetable dishes and baked items including breads and side dishes made from house-milled corn and grains.

"It’s easy for the mind to go to that place where you’re thinking our concept is pretty primal… pretty meat heavy," he says. "But, we’re not a steakhouse. In fact, what we’re going to do on the menu is really half vegetable-based and half meat. It’s about pushing out different foods that I really want to eat. My personal challenge is to really bring the same effort and thought into a vegetable dish as we would with a piece of delicious dry-aged meat."

Borghgraef says dishes will reflect a diversity of techniques – including hot ash cooking, cold smoking, dehydrating and roasting and baking in and over the hearth’s hot embers – each of which will employ the elements of live fire to bring out the best in ingredients from meats to vegetables, legumes and grains.

In terms of format, Borghgraef says he’s approaching things with an open mind. However, his vision is to provide diners with a casual atmosphere and a variety of dishes that can be enjoyed communally.

"The whole format for this is based on really what I want from dining – and that’s the casual, sharing nature of the setting. We won’t be serving small plates. Instead, we’ll offer larger, shareable plates reminiscent of what you might serve at a backyard barbecue."

In addition to dinner, the butcher shop will also serve as a counter service spot for diners to purchase fast, convenient breakfast and lunch items including housemade bagels, which will be made daily in limited supply. Those can be paired with house-cured fish, spreads and charcuterie. On the lunch side, there will be items like sandwiches, grain-based salads and soups. Both breakfast and lunch items can be purchased for carry-out or eaten inside the restaurant, notes Borghgraef.

Sunday brunch is also in the plans, says Borghgraef. "I don’t envision us as an eggs Benedict sort of place, though," he says. "When I think of brunch, I’m thinking of bagel towers with cured fish and accoutrements. Really casual, with cocktails... something with mezcal or classics like salty dogs and mimosas."

Birch + Butcher will be open daily beginning at 7:30 or 8 a.m. The kitchen is likely to offer service through midnight Thursday through Saturday evenings. On Sundays, the restaurant will be open for brunch from 8 a.m. to 4 p.m.

Stay tuned to OnMilwaukee for additional details as they are available. In the meantime, you can follow Birch + Butcher on Facebook and Instagram. The restaurant's web site is birchandbutcher.com.