Wooldridge Brothers - a band with deep roots in Milwaukee, where most of its members are still based - have a new record on the horizon. This one arrives via a unique partnership with Anodyne Coffee.

Wooldridge Brothers – a band with deep roots in Milwaukee, where most of its members are still based – have a new record on the horizon.

"Starts at Dusk," which officially launches at a CD release show on Friday, Aug. 4 at Anodyne Coffee, 224 W. Bruce St., and is released nationally in September, is packed full of the same quality songwriting – by brothers Scott and Brian Wooldridge – and production that has distinguished their many records over the years. 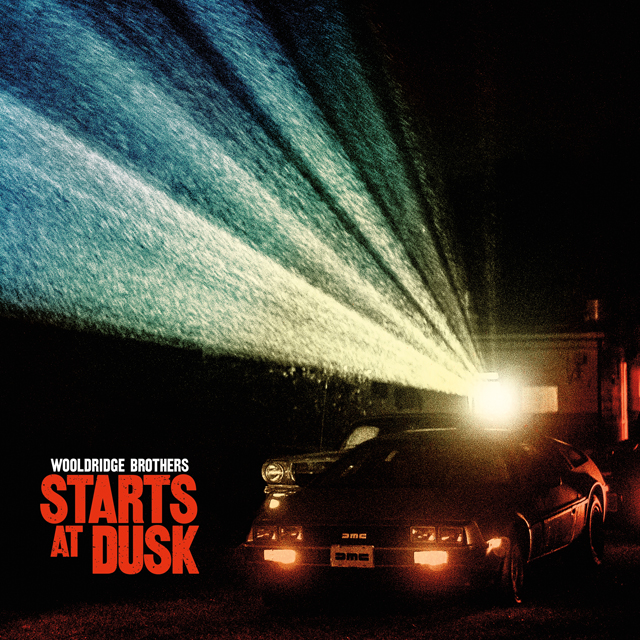 But this one has an interesting twist. "Starts at Dusk" has been released in partnership with Anodyne Coffee, which will be the sole bricks and mortar outlet for the record. The cafes will sell the record for four weeks before the music is added to the band’s own online store, and, later, to web outlets like iTunes and Amazon.

According to Brian Wooldridge, drummer Scott Gorsuch (aka G) was a key player on – and the producer of – "Starts at Dusk." Unfortunately, Gorsuch is no longer with the band as his drumming career has been halted by a shoulder injury.

"His production style is basically like a third writing partner on these songs," Wooldridge says. "His talent as a drummer and producer can not be understated in bringing this album to life. ‘Days Went Around’ – our last album – was almost 100 percent just Scott (Wooldridge) and I playing everything, with a hired drummer.

"This album was more a band effort with Gorsuch and me leading the arrangements and production. John Munson (Semisonic, Trip Shakespeare) was co-producer on some tracks recorded in Minneapolis."

We asked Scott and Brian Wooldridge to give us a song by song rundown of the new record. Here’s what they had to say...

Brian Wooldridge: Scott had written this song on piano and sent it to me. I initially dismissed it because I just wasn’t feeling it. Then as we were discussing songs for the album Scott brought it back up. I went back to the demo and converted into a guitar song. We showed it to the band, ran through it once, then hit record on some recording gear and ran through it again. That second run-through ended up the bed track that you hear on the album. There was plenty of overdubbing and production, but the practice take is there, from the initial guitar riffing to the solo at the end.

Scott Wooldridge: The chorus of this one came to me one day when I was driving around. It’s pretty much an old-school "angry love song" of the Elvis Costello/Joe Jackson variety.

Brian Wooldridge: The riff on on this one reminds me of Fleetwood Mac, so you can’t go wrong there. It’s a little bit of a trick arrangement with the breakdown at the end and Julie (Straszewski) doing her Ellen Foley to Scott’s Meatloaf part.

Scott Wooldridge: I think this is one of the most self-explanatory songs I’ve ever written … my kids give me a hard time about the lyrics: "You put on 15 pounds? So, like a normal day, huh?"

Brian Wooldridge: This is the perfect boy/girl coming of age story song ... and the song that lead me to start thinking of lost youth and innocents, summer nights, drive-in theaters and chance encounters that start at dusk. Scott’s demo was really good. Oh, yes kids ... that’s a Jack Rice bass solo in there!

Scott Wooldridge: This one’s kind of odd; I think of it as Van Morrison meets Robyn Hitchcock. I started writing it in the Clown Lounge of the Turf Club in St. Paul. Not sure if that’s important, but …

Brian Wooldridge: This was one of the last songs we did for the album, another one we ran through a couple times and cut the beds live. Jack sat this one out and I’m on upright bass. Audley Freed (Black Crowes and Sheryl Crow's guitarist) is on guitar. Scott and I met him when we did the Big Star show in Mnpls. We struck up a friendship and I asked to play on the track, he’s amazing.

Place In The Sun

Scott Wooldridge: A demo from right around the time I moved to Minneapolis, so it was pretty old. But BW always liked it. I think I was trying to do an XTC thing when I first wrote it. We’ve changed it a lot and played with the idea of changing it more. This is how it ended up.

Brian Wooldridge: Yep, I went back to the old demo. It was a very slow, all keys type of tune ... so of course I stripped all that out and came up with the bass part and the Beatles-esque guitar part. G came up with the strings and we ran with it from there.

Scott Wooldridge: Brian and I collaborated a lot on this one. It’s kind of Kinks-ish but lately I’m thinking of it more as a Squeeze song.

Brian Wooldridge: This one was a perfect collaboration between Scott and I. I had the guitar part and he tweaked it and came up with some great lyrics … "she’s lovely and she’s boring." I shaped the chorus and bam, hello 1960s pop song!

Scott Wooldridge: I wasn’t very fond of the character in Blade I, so I thought I’d see how he was holding up a few years later. This was written around the time David Bowie died, so the melody and vocal approach were a bit influenced by the David Bowie that resides in my head.

The musical foundation is all Brian, plus Hal Hinderliter on drums. They did a demo of this that was quite rocking. I kind of ignored BW’s suggestions for lyrics and rewrote all that. Oh, and about a week after we got the album back, I showed someone the cover, and they said, "Is this about the vampire movies?" I was like, "oh, sh*t."

Brian Wooldridge: I had this chord progression that I really liked, worked up the whole tune and did a demo with Hal. Scott pitched my lyrics – a good thing – and finished out the relationship story started in Blade I...I added the rock. Perfect.

Scott Wooldridge: This one is based on a true story of a woman from my hometown who went missing and has never been found. I knew her and her family when I was young, and I know the lack of closure to her story has been a burden. I think BW sent me a music idea around the time of an anniversary of her disappearance, and people were talking about it on Facebook. The lyrics just came out and I decided to go with them. Not an easy subject to write about.

Brian Wooldridge: The original guitar pattern came to me while riding my bike on the Hank Aaron Trail. I got home, grabbed a guitar and Julie recorded it on her iPhone, and sent it to Scott. He simplified the guitar part and created this amazing haunting story/melody. I almost wanted to put it on the album acapella because his vocal take was so good.

Some Of The Damage

Scott Wooldridge: Another song about living with a painful past. I’ve had a couple friends who have passed away, and you sometimes wish you had done some things differently. Also, as a parent I know there are things I’m going to get wrong no matter what.

Brian Wooldridge: I was trying for a (Wings' guitarist) Jimmy McCulloch style and sound for the guitar solo, I think I got pretty close. Scott had the core song but then I came up with the end section and G really fleshed it out.

Something's Always Better Than Nothing

Scott Wooldridge: This follows "In the Dark" and "Damage," and I’m glad it’s a little more upbeat and positive. Well, relatively speaking. I believe this song brings my T.S. Eliot reference score to 2 for this album. For the previous WBs album, I think it was 3 or 4. I really like the electric piano G added to this one. Also, it has more cowbell.

Brian Wooldridge: Julie rocks the cowbell on this one ... and really what else do you need. I was trying to channel a Matthew Sweet vibe.

Scott Wooldridge: BW’s song, for the most part. I think I played around with a couple lines, lyrically. I really like how it turned out.

Brian Wooldridge: I showed this one to the band at a rehearsal at the Tosa Ranch. G started playing around with the beat and Jack worked up a groove bass part. It started out Americana but ended up more '70s soul. G really shined on this one with his keys and string parts.

Scott Wooldridge: Just a little rave-up about the need to make something out of nothing. Brings my Neil Diamond reference score to 1.

Brian Wooldridge: I didn’t like this song but G said he wanted to do it, so we did it. I agree now, it’s a good closer tune.