You pick: Which new Wisconsin State Fair foods should we try?

There appears to be a variety of themes among the new dishes being offered at the Wisconsin State Fair - from new breakfast items, to bacon, unicorns and even (erp!) bugs. But, which ones should Lori Fredrich, our dining editor, try and review this year?

We'd like to interrupt the arterial recovery you've been experiencing since the close of Summerfest with a new edition of diet-destroying treats.

This round is brought to you by the Wisconsin State Fair, which has proudly added nearly 70 gut-busting additions to its menu for 2017.

There appears to be a variety of themes among the new dishes being offered – from new breakfast items, to bacon, unicorns and even (erp!) bugs.

I’m a little disappointed. There are notably fewer new foods "on-a-stick" this year than there have been in the past. And it makes me wonder: Have the vendors lost their inspiration for creatively skewering interesting foods? In fact, one of the most interesting 2017 contenders is the Door County Popper On-A-Stick, mostly because this combination of ingredients is utterly perplexing to me: a bell pepper stuffed with a creamy coleslaw and served on a bed of shredded carrots and cheddar cheese with a side of shrimp cocktail sauce. What??

I’ll probably skip that in favor of the Sangria On-a-Stick. It’s just a popsicle (sad trombone) but it’s made from a refreshing mix of frozen wine, club soda and fruit. And it sounds like it could be a great way to beat the heat (a bit like last year’s beersicles did).

There will also be magic in the air, along with glitter and rainbow colored sugar. In fact, my guess is that all the little girls (including me) are going to be excitedly ordering up the Unicorn Twinkie, a deep-fried twinkie with cotton candy filling topped with bright pink and blue icing and edible glitter sprinkles. I’m suspecting this is a direct descendent of the #RainbowFood trend, a national craze you needn’t look further than Instagram to witness. And that’s ok … because, unicorns! 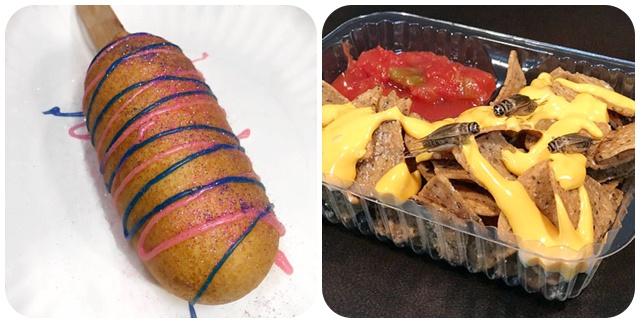 Apparently, insects are also making an appearance at this year’s State Fair. All Things Jerky has come up with a plan to sneak crickets into our diets. Their featured cricket chips are apparently gluten-free and quite high in protein, boasting at least one cricket per chip. You can also get those chips in the form of Cricket Nachos, which are said to have "all the flavor of regular nachos" ... plus, of course, a bit of bug.

For the second year in a row, I'll be trying and reviewing at least ten of the new Wisconsin State Fair foods. I've got a small list started of things I'm interested in trying, but I'm also taking requests! Leave your suggestions for foods I should consider in the comments or email me at lori@staff.onmilwaukee.com (use subject line: State Fair Foods) on or before Aug. 1. I'll try to include as many of your suggestions as I can.

In the meantime, you can take a look back at the 13 foods I reviewed from the 2016 State Fair.

All the new foods

For your convenience, here’s the complete list of all the new foods at the Fair (along with where to find them). You can also find more favorite dishes using the Wisconsin State Fair Food Finder.