Thanks to Milwaukeean Karl Bandow, who found a treasure trove of old Kodachrome half-frame slides of Milwaukee in an antiques store, we can offer up these gorgeous photos of the city as it appeared in the 1970s.

Last week, we introduced you to the great photographic work of the late Ray Szopieray, thanks to Adam Levin, who purchased many of the photographer's slides at an antiques store.

Now, thanks to Karl Bandow, who also scored some of that Kodachrome treasure, we can add these great photos of the city as it appeared in the 1960s. Many of the images first appeared on Levin's Old Milwaukee group on Facebook. 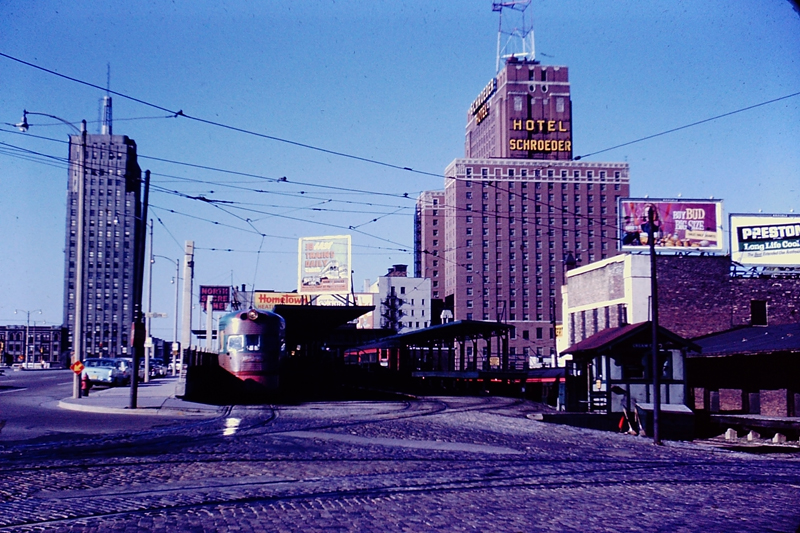 Back when rail was a daily mode of transport for many, if not most, Milwaukeeans, there were a number of stations and depots Downtown, including this one on 6th and Clybourn that was the northern terminus for the Interurban North Shore Line, which ran between here and Chicago until January 1963. 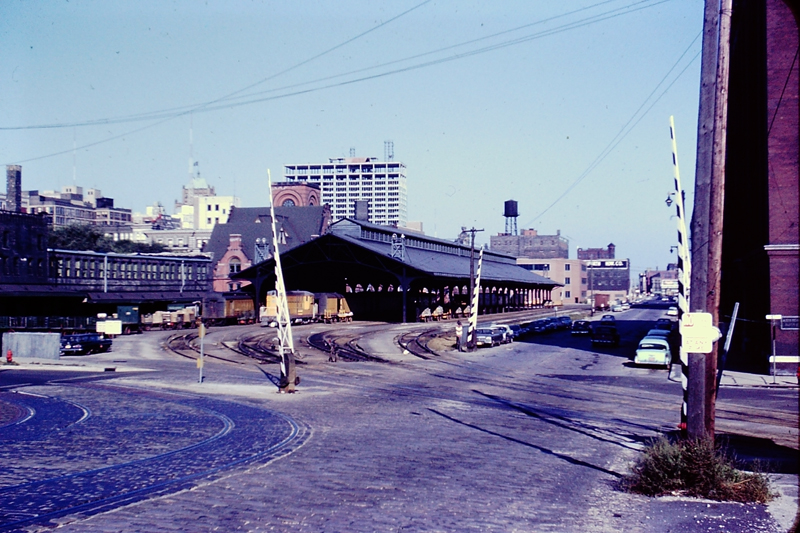 This is a view of the train shed behind the old Union Station on Everett Street (now site of the WE Energies offices). Also called the Everett Street Depot, the station was built in 1886 and closed in 1965 when it was replaced with the current station on St. Paul Avenue (that's the street you can see running alongside the shed). It was home to the Milwaukee Road. You can see that by this time, the beautiful Gothic tower of the station had been lopped off just above the arched belfry. It was razed in '66. 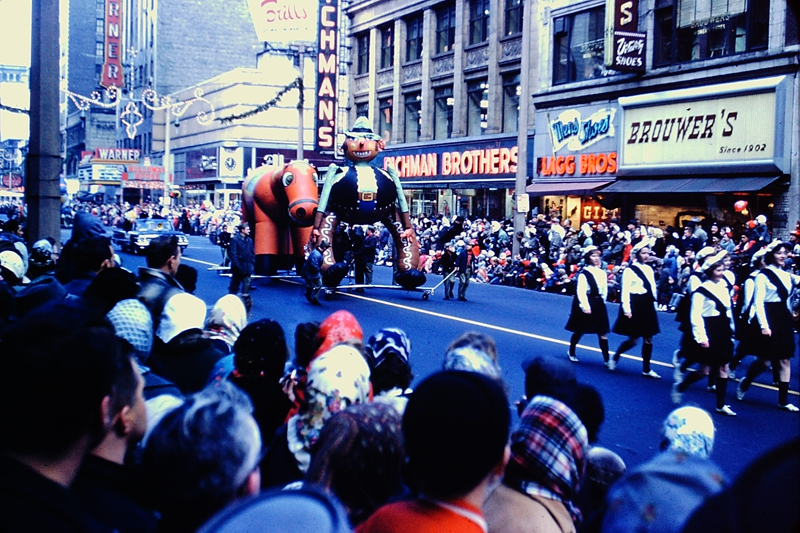 I'm not sure what the parade is, though the lights strung across "the Avenue" suggest a holiday parade. Most interesting, anyway, are the amazing signs: Flagg Brothers, Richman Brothers, the Warner Theater, Brouwer's. In the 1960s, Wisconsin Avenue was still the city's main retail draw, before the malls really kicked into gear. 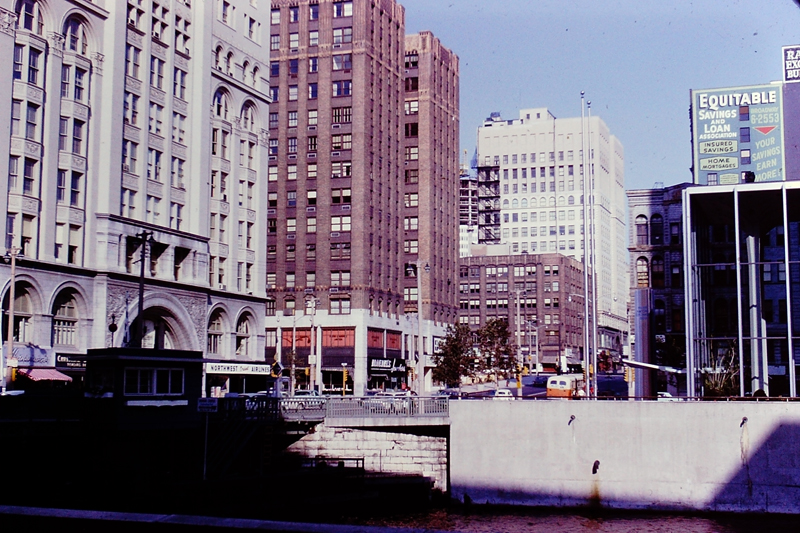 Wisconsin and Water seen sometime after 1961, when the Marine Plaza (now Chase Tower) was completed), offers two especially interesting views. First, The Pabst Building, Milwaukee's first skyscraper (at left), which was demolished at the dawn of the 1980s, and second, the original face of the building on the northeast corner, which was designed by Eschweiler & Sons. That building survives, but with all of its ornament removed. 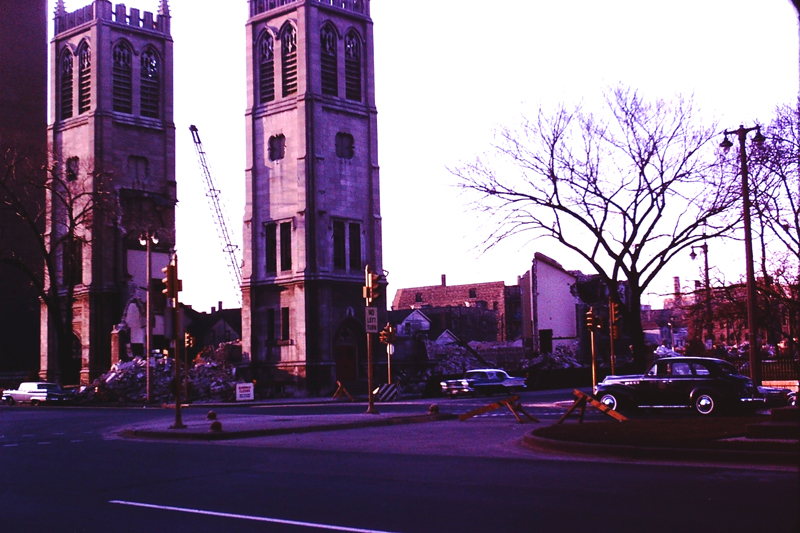 The First Methodist Church, located at 1010 W. Wisconsin Ave., was razed in 1966 to make room for I-43, changing the character of a stretch of Wisconsin Avenue that boasted numerous houses of worship. 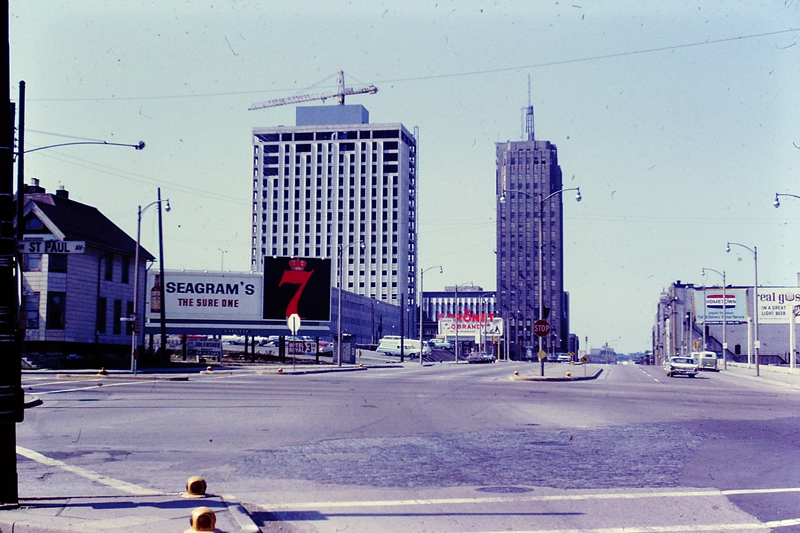 Architect Robert Lee Hall designed the building under construction in this photo, which was completed in 1966, and the following year it was purchased by Emory Clark, founder of the then-Milwaukee-owned-and-based Clark Oil. In '67, Clark installed a rotating sign on top. At the back end of the attached parking garage was a space that for many years served as the Milwaukee Greyhound Bus station. What I like most about this shot is the house on the left, which serves as a reminder that this part of Downtown was once a place folks lived in detached homes. 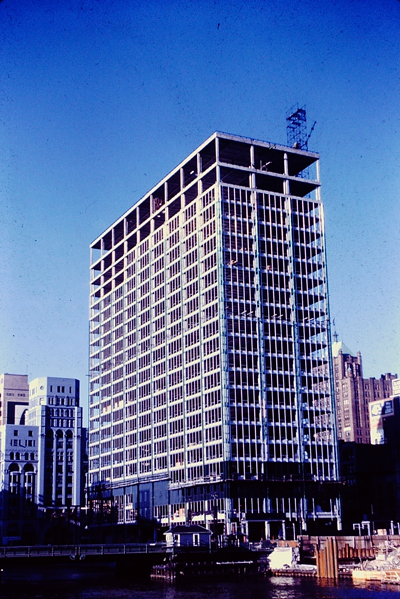 Harrison and Abramovitz designed the sleek, modern 22-story Marine Bank Plaza, built in 1961. For years there was a restaurant on the top floor called Stouffer's Top of the Marine. Now it's Chase Tower and there's no more restaurant up there. 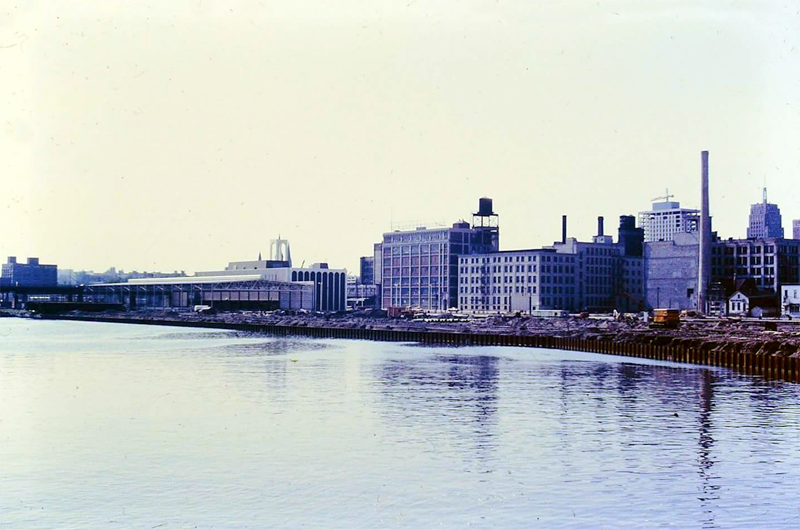 In the distance you can see the Clark Oil building rising (meaning this was likely taken circa 1965-66). In the foreground is the land that is currently home to the post office ... for now. 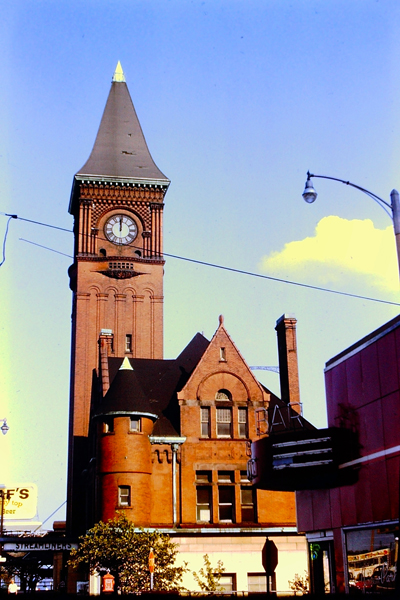 Don't get some people started about the demolition of the Northwestern Depot at the lakefront, where O'Donnell Park now sits. This Romanesque gem, erected in 1889 as as grand station for the Chicago & Northwestern Railroad, was a Milwaukee landmark and many are still smarting from its loss in 1968. 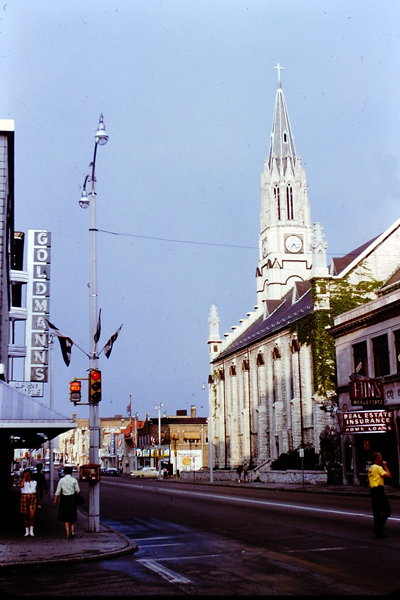 Milwaukee other main street, seen here looking east (and slightly south) from the corner of 10th Street. That's St. Anthony on the right, of course, but it's the Goldmann's sign at left that makes Milwaukee history buffs' hearts flutter.