12 dishes you shouldn't miss at Kin by Rice N Roll

It's been just about a month since Kin, the new restaurant from the owners of Rice n Roll, opened at State Street Station. In fact, it's a very good time to pay a visit to the restaurant, as there are numerous new and delicious items to try. Here are 12 that stand out.

It’s been just about a month since Kin, the new restaurant from the owners of Rice n Roll, opened at 7484 W. State St. in State Street Station.

During that time owners Tony Kora and siblings JJ and Tammy Lert have been busily perfecting dishes, gleaning feedback from customers, stocking the sake bar (which now has nearly 20 selections) and finalizing the grand opening menu. In fact, as of this week, the menu is just about complete.

Kora says there’s one exception. The team will be adding three varieties of ramen to the menu in the weeks ahead: spicy miso, tonkotsu and vegetarian.

Suffice it to say, now is a very good time to pay a visit to the restaurant, as there are numerous new and delicious items to try. Here are 12 that stand out. 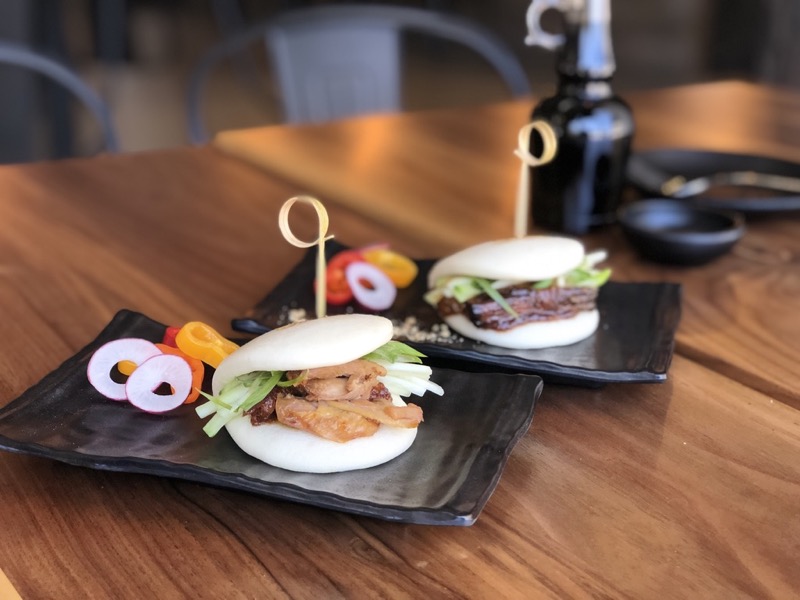 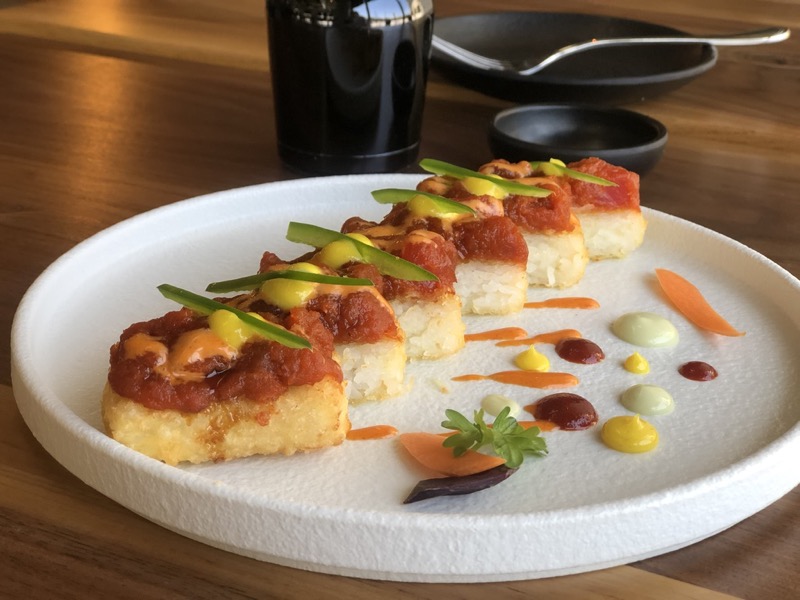 This dish resembles sushi; but it’s built up on the foundation of Japanese style pressed rice that’s been fried until crisp and then topped with spicy tuna, unagi sauce, jalapenos and house curry mayo ($10).

"In Thailand, we have a distinctive rice cracker that’s made from sticky rice that’s been patted thin, dried and then fried in hot oil and puffed; this dish has a similar effect and flavor without all the complicated processes." 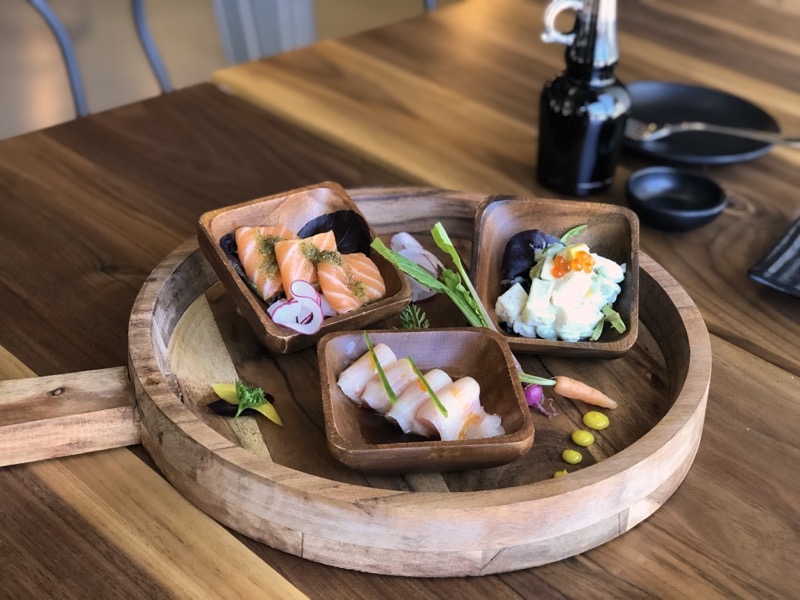 In Thailand, the word "dip" actually means "raw." And this appetizer showcases three Thai-inspired preparations of raw seasoned fish. Guests choose one for $10. 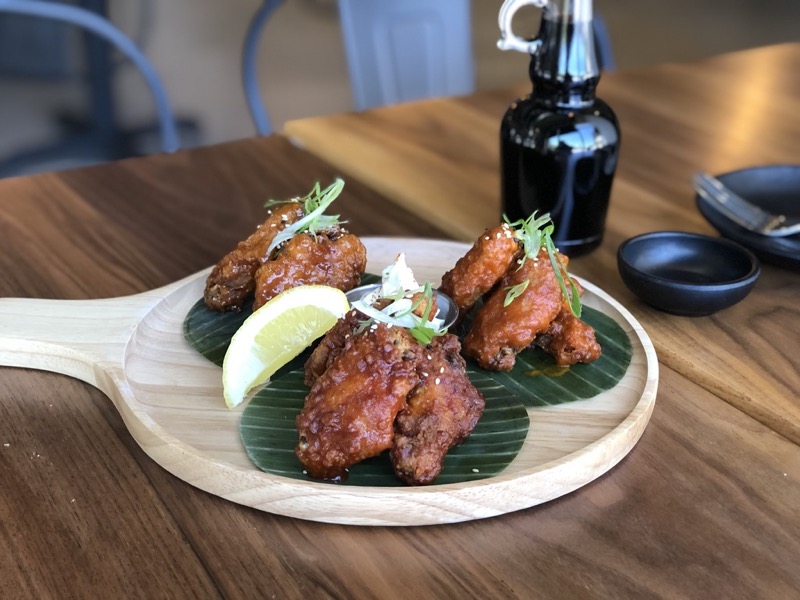 At Kin, Lert marinates fresh chicken wings, applies a light breading and deep fries them until crisp. The wings are then tossed with guests’ choice of sauces and served with wasabi whipped cream for dipping (six pieces for $8; a dozen for $14). 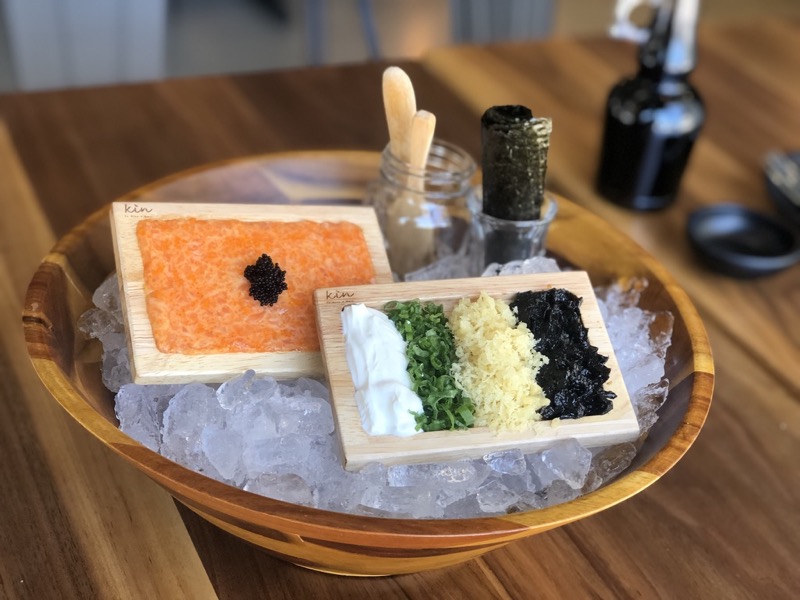 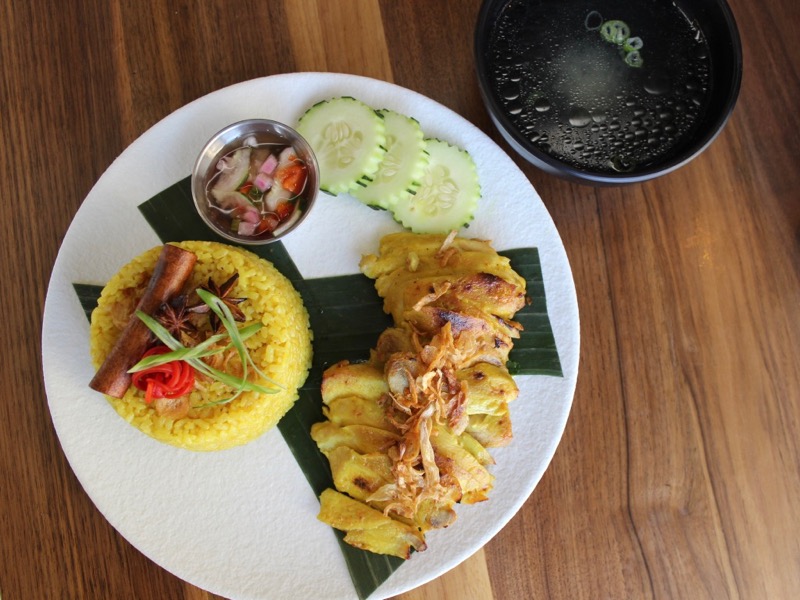 A portion of Kin’s menu is dedicated to the traditional street foods that are ubiquitous in Thailand. Among them is khao mok gai. Traditionally made with a whole chicken cooked together with rice, this version incorporates chicken pieces cooked with rice and aromatic spices including star anise, cinnamon, curry, turmeric and coconut milk. Lert says the flavor is similar to Thai chicken satay which is marinated in similar spices and sprinkled with coconut milk while being grilled.

The rice and chicken are served in the traditional fashion with a bowl of simple chicken stock seasoned with salt, white pepper and daikon radish for sweetness ($12). Guests who prefer a less spiced, but just as traditional dish can opt for the khao man gai, which is seasoned more simply with herbs and ginger. 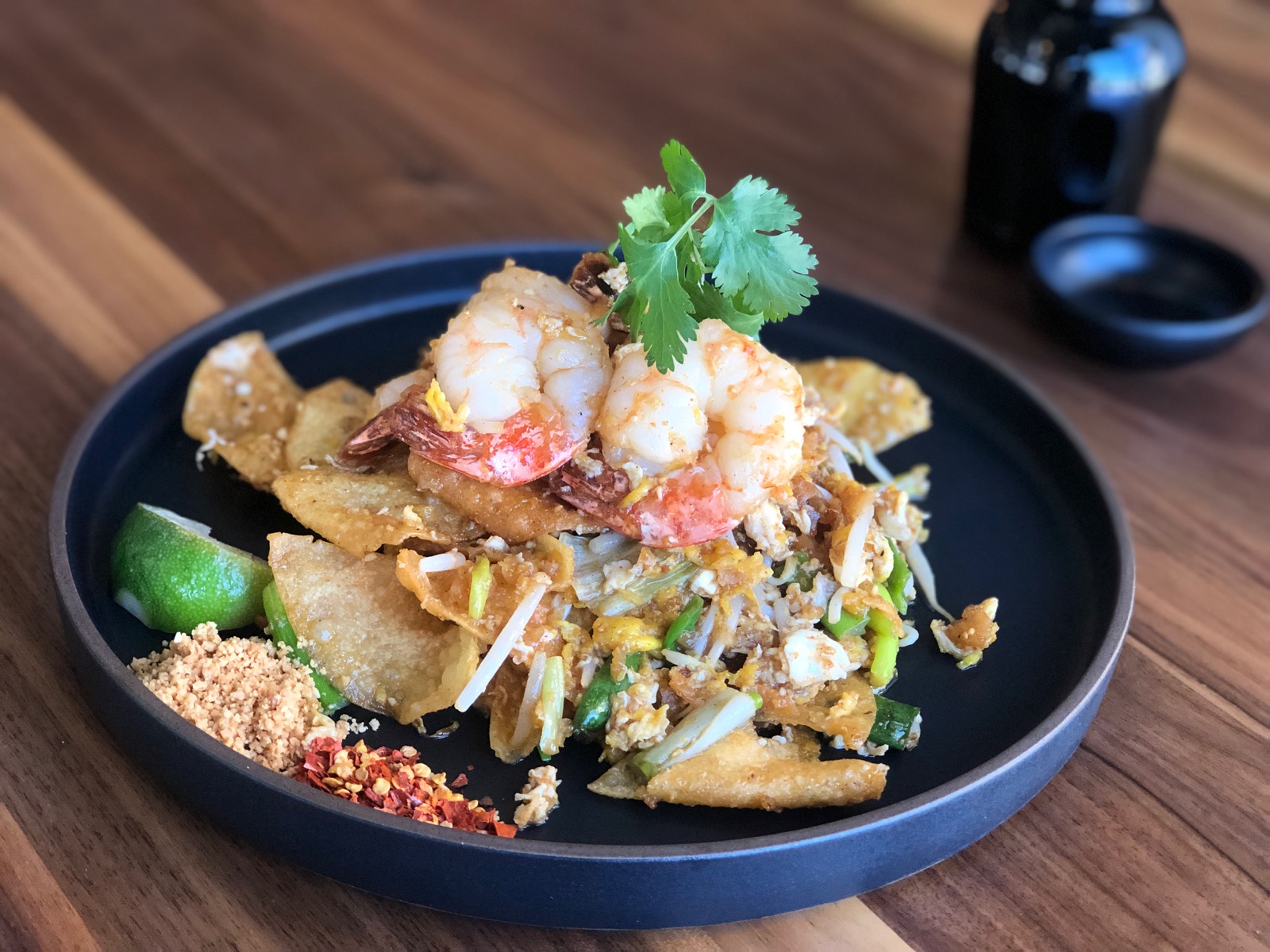 Looking for a new version of a classic favorite? This dish is a modern rendition of pad Thai which Kora says can be found at a few contemporary restaurants in Thailand. Traditional pad thai is served with crispy wonton instead of rice noodles, giving the dish additional texture and flavor ($13).

The dish is meant to be eaten as a main course, but it could just as easily be served as a shareable appetizer, consumed similarly to American nachos. 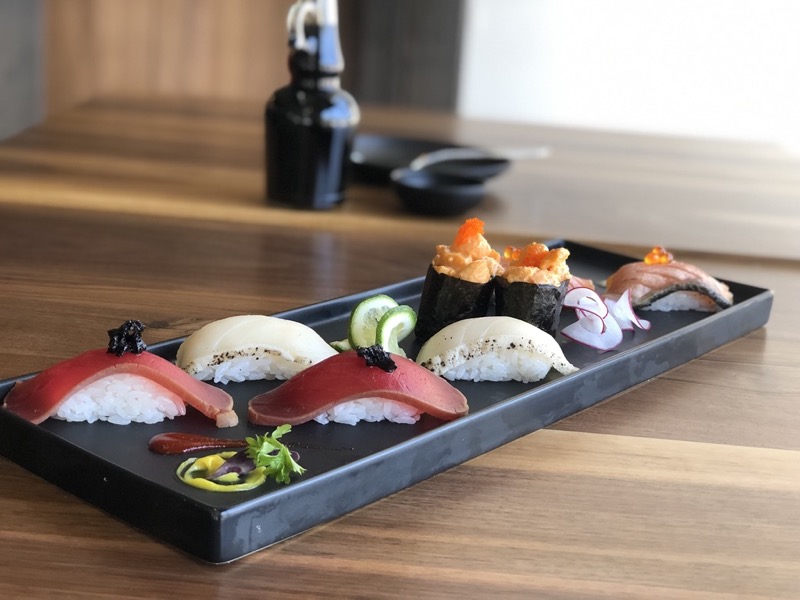 Zuke describes a very old traditional way of preparing sushi. Made popular during the Edo period in Japan (1603-1868), fish was marinated in a soy-based sauce as a method of preservation.

The method has largely fallen out of favor, since modern refrigeration and storage make the marination process unnecessary; but Kora says he’s taken on the practice to provide customers with something new and different.

"I’m wanting to try new and different things," he says. "You don’t see people doing much with zuke here in the States unless you go to New York. It’s a bit more complicated than making regular sushi, but the results are beautiful and the taste and texture of the fish is more interesting."

Kora says it’s taken him months of practice to determine the ideal marination time for individual types of fish, as well as the recipe for the marinade itself, which includes both soy sauce and mirin to prevent it from making the fish too salty. 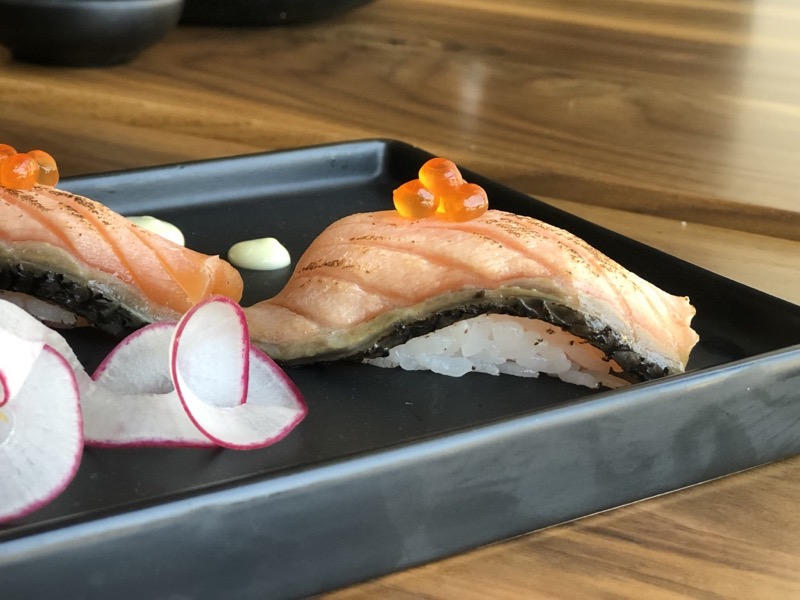 Currently, he prepares three types of fish with the method. 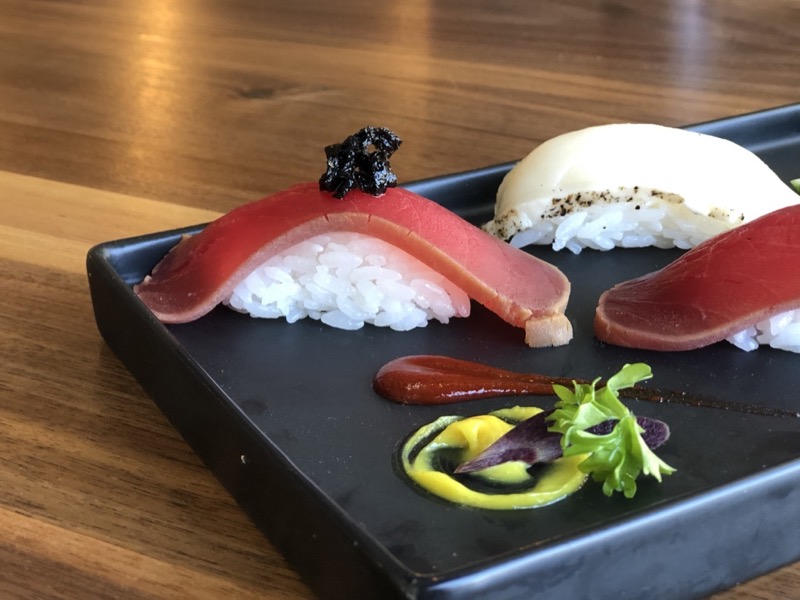 Additional specialties include escolar tataki, which features buttery escolar that’s been seasoned with salt and pepper and quickly seared over very high heat. It’s served atop sushi rice with lime for sprinkling. 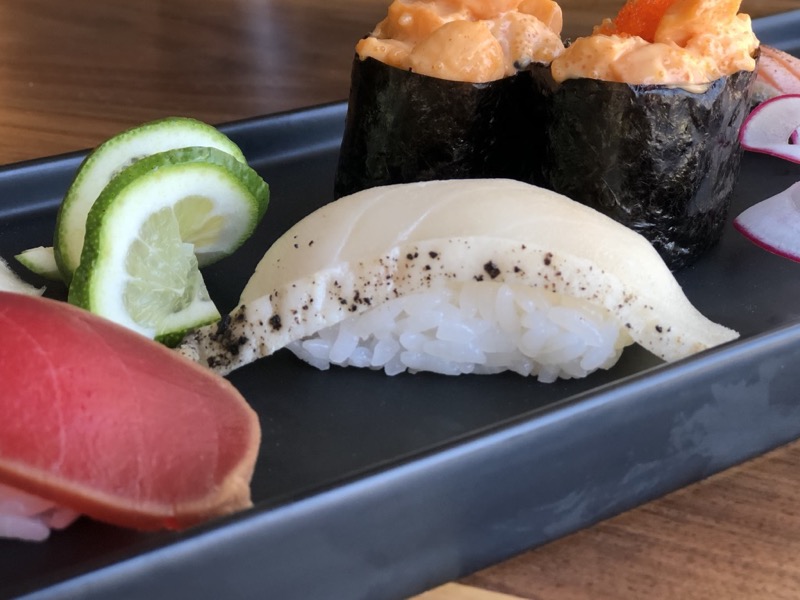 Meanwhile sweet Hokkaido scallops are quickly blanched and then chilled before being mixed with a mayo-based sauce, piled into a nori wrap and topped with masago (smelt roe) for texture. 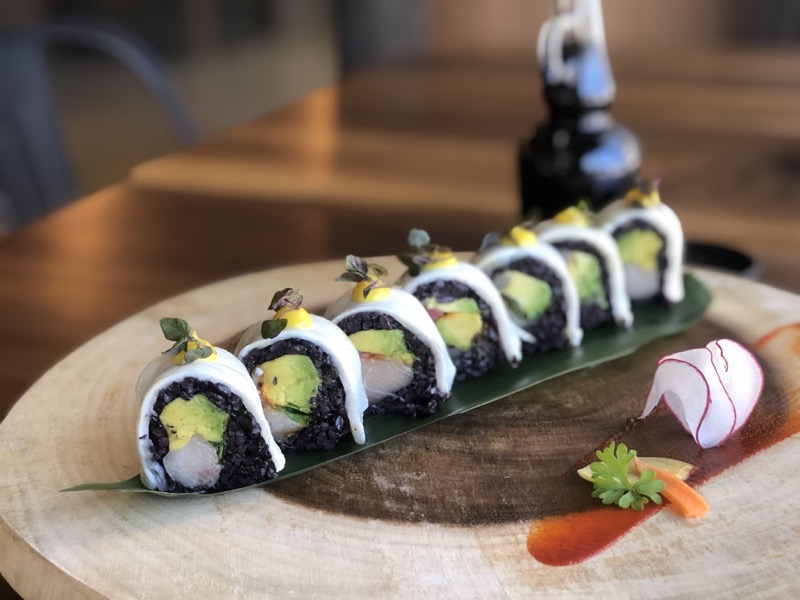 Among Kora’s signature creations is the stunning Tosa Fab roll which features a combination of fresh yellowtail, cilantro and avocado wrapped in black rice (Kora says he loves the texture and color it adds) and topped with super white tuna. It’s topped with housemade curry mayo and microgreens ($16).

Note: guests can substitute brown or black rice for white rice in any sushi for an additional charge. 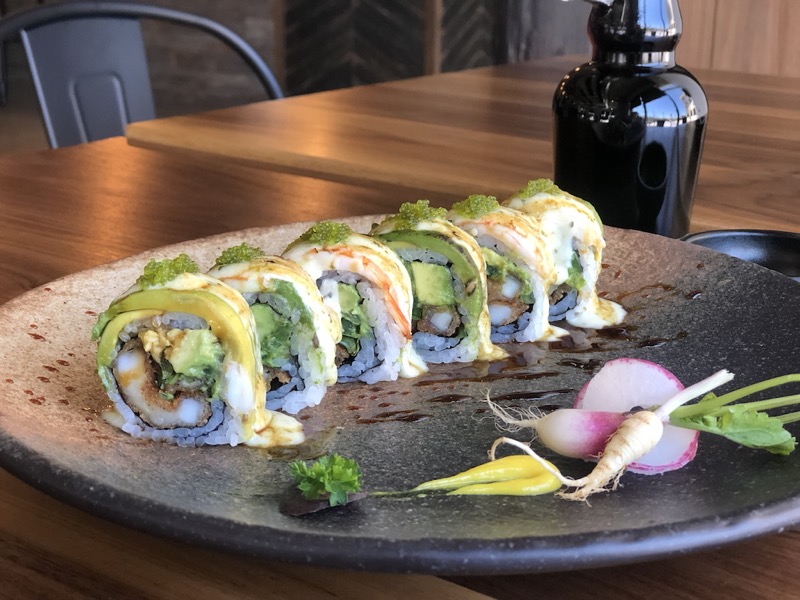 Another of Kora’s signature rolls is the sea smoke, which features fried calimari, avocado and cilantro wrapped in rice and topped with sweet soy glaze and ebi (shrimp) that’s been seared in lime garlic mayo, giving it a distinctly smoky smell. Wasabi tobiko offers additional flavor and texture ($15) 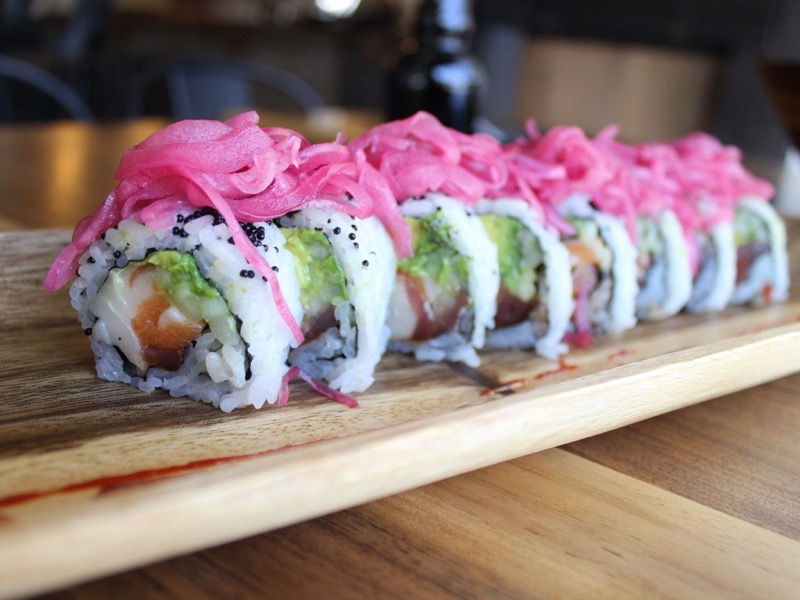 This roll is "fresh and lean" says Kora, noting the combination of salmon, tuna and superwhite tuna combined with creamy avocado and crunchy, fresh cucumber. The combination is topped with black tobiko for color and pickled red onion, giving the roll a bright fresh pop ($16). 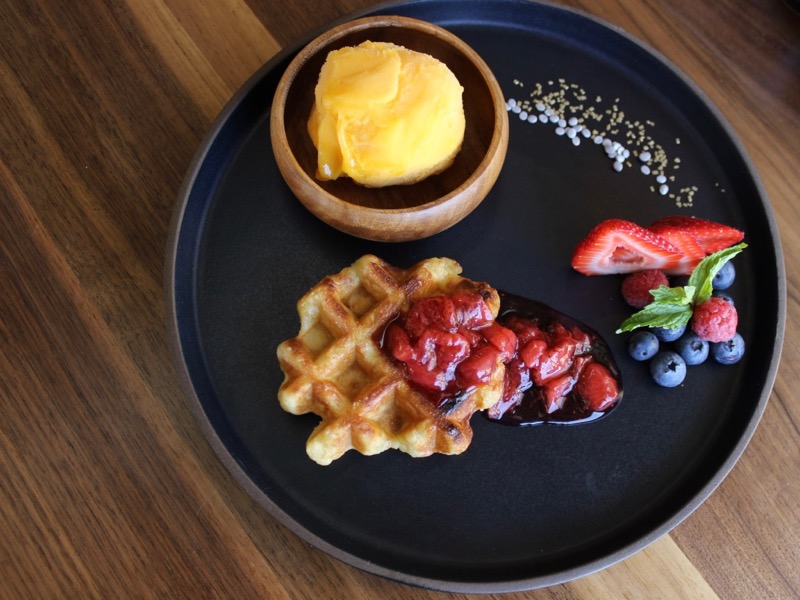 Tammy’s sister Par Lert has joined the kitchen team at Kin, and she’s taken on the creation of the restaurant’s dessert offerings. Among the choices is a summery crowd favorite, the Wicked Waffle.

Belgian style liege waffles from Press. are topped with strawberry sauce and served with custom-made mango sorbet and fresh berries. Lert garnishes the plate with an array of sugar candies for added interest ($11).