On Nov. 24, 1917, a bomb tore through the Milwaukee Police Department headquarters on the corner of Broadway and Wells, killing 10 people including nine police officers. It was the biggest loss of police life in a single incident in the U.S. until Sept. 11, 2001.

On a sunny but chilly day in early September 1917, Italian immigrant pastor August Giuliani led a band of Protestant evangelists from Milwaukee’s heavily Italian Third Ward on a jaunt to the smaller Italian enclave of Bay View.

Giuliani, a former priest, had hopped the Delaware Avenue streetcar with some of his flock on the previous two Sundays, too, setting up on the corner of Bishop (now Wentworth) and Potter Streets with an organist and two trumpeters. There, they sang patriotic songs and encouraged those in the neighborhood to do their duty and support the American war effort.

Each time, Giuliani met with resistance from people he deemed anti-war anarchists. But Giuliani was unwelcome, it was said in the neighborhood, not because he preached patriotism but because he defamed Catholicism in his attempts to convert the Italians. 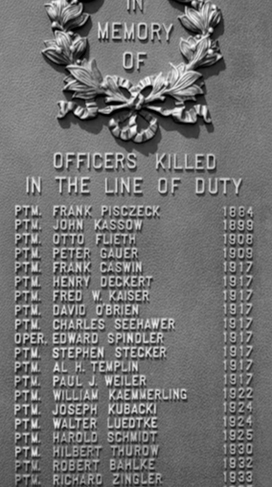 So, after being shouted down twice, Giuliani approached the authorities, and four policemen were on hand for his third meeting at Bishop and Potter on that Sunday, Sept. 9, 1917. The tune of "Columbia, the Gem of the Ocean" was struck up, and the faithful began to sing. A crowd gathered, and Giuliani’s group was jeered.

When the police approached the hecklers, guns were drawn and shots began to whiz and whirr through the intersection as the crowds dispersed. When the smoke cleared, two policemen were hurt, two Bay View Italians were mortally wounded and two more were injured. One was shot in the back.

On Nov. 24, a bomb – linked to the Bay View affair by the pastor, police and the newspapers – was found at Giuliani’s Third Ward church. It was carried to the central police station by a parishioner, where it exploded, killing nine policemen and a civilian. The tragedy marked the largest loss of police life in a single incident in the United States until Sept. 11, 2001.

Not a week later, the trial of the Bay View Italians began in a city inflamed with fear, distrust and vengeance. After a trial marked with bickering among attorneys and irregularities, such as Giuliani being tapped as translator for the statements of the accused the jury – having deliberated for 17 minutes – found all 11 defendants guilty of conspiracy to "assault with the intent to kill and murder." Each was sentenced to serve 25 years at the state prison in Waupun.

Soon, nationally recognized figures like attorney Clarence Darrow and radical heroine Emma Goldman would become involved in the Milwaukee affair, and Darrow would lead the appeal to the Wisconsin Supreme Court, where nearly all the convictions were overturned and the accused deported (though some would later return to the U.S.).

Local police recruits are told little about the 1917 bombing that claimed the lives of nine of their predecessors. One officer was quoted in a 1992 magazine article as saying that the only thing he was told about the incident was "don’t bring bombs into police stations."

The names of the fallen officers are inscribed on a monument to policemen killed in the line of duty that stands in Downtown in MacArthur Square – itself the scene of one incident in a rash of pipe bombings in 1984 – behind police headquarters. A display in the police academy also includes photographs of three of the men who perished in the 1917 explosion.