The East Side erupted in violence 45 years ago

Nestled between Wyoming Place mansions and St. Mary's Hospital, is the venerable Water Tower Park. In the 1960s, the park had become a popular gathering spot for all manners of young people, including the founders of the city's underground scene, political radicals, street theater performers and, of course, musicians who played drums, guitars or anything else that made enough noise to drive the mansion mavens up the walls.

By the summer of 1970, Milwaukee’s Counterculture scene, in its infancy only four years earlier, was showing signs of age.  Most of its members, now reaching or already into their 20s, were beginning to face the realities of life, that the party must indeed end, with the prospects of finishing school, getting jobs and starting families looming inevitably ahead.

Sadly, others who not long before had been cheerful, magical-thinking "Flower Children" were, like the many of those around the country, falling prey to hard drugs, sexual predators or to fears of losing their identity as the Counterculture and mainstream America began to meld together. 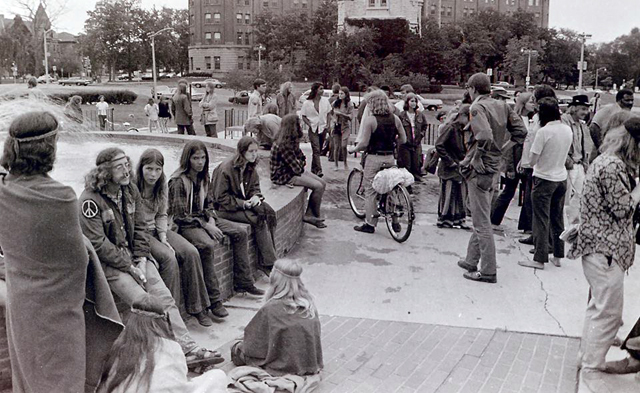 On the streets of Milwaukee’s East Side, though, things looked pretty much the same as they had in the late '60s, with long-haired men and women walking past people hawking Kaleidoscope, the city’s original underground newspaper, or visiting the "hippie shops" selling colorful clothing, hash pipes and other soon-to-be remnants of an age coming to an end.

Further up, nestled between Wyoming Place mansions and St. Mary’s Hospital, was the venerable Water Tower Park, built a century before to house a large standpipe that equalized water pressure in an underground tube that pumped fresh water from Lake Michigan to the Kilbourn Reservoir, from where it then flowed into the city’s network of water pipes.  (The pumping station is now the home of Colectivo Coffee on the lakefront.)

The park had become a popular gathering spot for all manner of young people, including the founders of the city’s underground scene, political radicals, street theater performers and, of course, musicians who played drums, guitars or anything else that made enough noise to drive the mansion mavens up the walls.

And to be sure, it had rapidly become an evening magnet for many suburban teenagers who had missed the boat during the Counterculture’s heyday but were still hoping to catch the last wave before it crashed ashore and faded away.

Increasingly St. Mary’s administration became concerned, saying the sounds were disturbing the hospital's patients and staff. After all, the surrounding streets still displayed "Hospital – Quiet Zone" signs left over from pre-air conditioning days, to remind drivers and others that the sick should be allowed to heal, or perhaps die, in peace.

And so, by the end of June, the hospital authorities and nearby residents banded together to ask the Common Council to pass an ordinance closing the park at 10 p.m. It was in fact simply an extension of the city’s longstanding noise ordinance that took effect at the same time, but the frequenters of Water Tower Park took it as a personal affront, as this would give the authorities easy discretion on enforcement.

The second week in July a sign saying "Park Closed at 10 p.m." appeared, but the gatherers, as expected, didn’t bat an eye, ready to protect their self-appointed turf.  But police were staging a few blocks away, ready to enforce the new ordinance.

These were hardened cops, many still Korean War vets and most all having the racial riots of three years before quite fresh in their minds.  But, in particular, standing among them was the newly-formed Tactical Squad, created in response to the race riots, but which focused much of its efforts on patrolling the East Side to harass those "pinko hippies."  Which they did with pleasure.  And now was their chance for some real action. 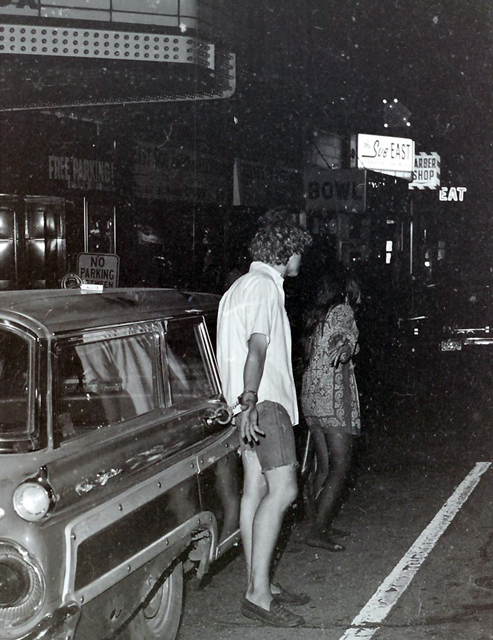 Clubs and helmets ready, the police waded into the park on July 13, seemingly catching many of the young people off guard. They began by pushing and shoving them onto the streets but soon the club-swinging began, blooding heads and cracking not a few bones. Customers began pouring into St. Mary’s Emergency Room, while others were cuffed and tossed into patrol wagons.

Tuned out that was just the warm-up act.  In the daytime following, the Yippies, self-styled political radicals who loved nothing more than a good fight with the cops, had brought heavy rocks to the park and planted them among the bushes, ammunition for the battle they planned ahead that evening.

That night the park inhabitants returned and began tearing down the "Closed" sign.  This time the Tac Squad was in full force, headed on the scene by its founder and leader, Sgt. Frank Miller.  As the clock struck 10, Miller yelled "Charge!" and charge they did, scattering the kids in all directions, in particular down North Avenue to the five corners intersection, Yippies right in the mix, breaking windows and having the time of their lives.

(Even the staid Milwaukee Journal took umbrage at Miller’s "charge" decree, saying its only intent was to encourage violence on both sides.)

In one of the week’s oddest juxtapositions, Melanie, the sweet-voiced Canadian folk singer of the era ("Candles in the Rain"), was that night performing live at the Oriental Theater.  Some innocent ticket holders were arrested as the police didn’t bother to distinguish one long-hair from another. 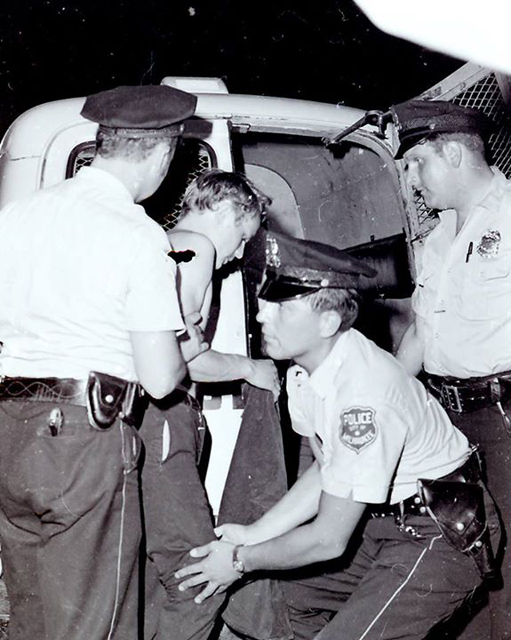 In the end, most of those arrested were simply held overnight in jail and released without charge, unless you count facing the tender mercies of many parents who ventured in from places like Brookfield to pick them up.

In the wee hours of July 17, far across town, a PTSD-addled Marine Vietnam veteran named Randy Anderson (pictured below), along with two companions, decided to strike a blow against the empire by firebombing an A&P grocery store at 79th and Burleigh.  Unknown to Anderson and one of his friends, the person driving them to the scene was a police informer, and the cops were laying in wait all around the neighborhood. 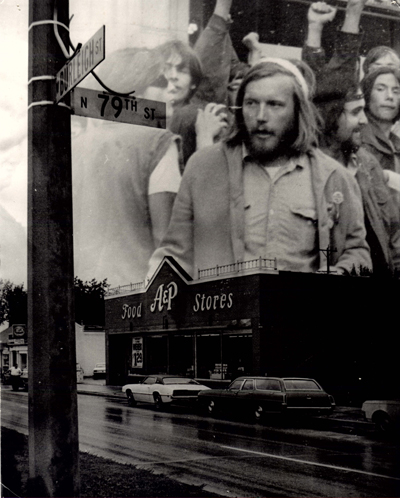 The driver dropped Anderson and his friend off and then peeled away.  Anderson allegedly lit the firebomb and as he was throwing it through a window, the police emerged.  Anderson and his friend, both unarmed, tried to flee across the boulevard but were caught in a crossfire of police weaponry.  A shotgun pellet caught Anderson in the cheek and lodged in his throat, and a revolver shot penetrated his lower back, according to a newspaper report, and he died at the scene.

His accomplice was shot six times but survived. After a quick review in the DA’s office the next morning the police actions were ruled justified and the cops were back on the street in short order.  No "administrative duty" requirement back in 1970, much less a formal inquiry into such matters.

But the sounds of the police gunfire echoed quickly back to the East Side.  Clubs and rocks were one thing, but bullets were something else.  The killing did more than any city ordinance or police action could.  That evening a few hundred people huddled in the park in the rain for a before-curfew, impromptu memorial service for Anderson, and then quietly dispersed.  Save for quite a few bored cops and news photographers, by 10 p.m. Water Tower Park was empty, as it would remain for the rest of the summer and beyond.

And so ended the only non-political confrontation between the Counterculture and the police in Milwaukee’s history. Compared to the battle over People’s Park in Berkeley, Calif., the previous summer, in which one of the more than 30,000 protesters was shot and killed by police, another blinded and thousands of National Guardsmen were called to the scene by Gov. Ronald Reagan, it was a pretty tame affair.

Of course, dark thoughts filled the minds of some of those involved in the park disturbances that the Anderson killing was planned as a way to send a message to the youngsters causing trouble across town.  But for even the most hardened conspiracy-thinking people of time, this idea exceeded even their dire imaginations.

Somewhere over the years the "Park Closed" sign was quietly removed by the city, like the "Quiet Zone" signs, having long lost its relevance.  Safe to say you can probably walk your dog, or maybe even strum a quiet guitar, in the park after 10 p.m. this summer, without fear that anyone remembers the ordinance passed 45 years ago for a single purpose that, like the Counterculture, is just a small chapter in the history of Milwaukee’s East Side.

Application seeks to add East Side homes to historic district

For sale: An East Side Miller Brewing tavern that wasn't