The best of the 2019 Milwaukee theater scene

'Tis the season for making lists - and for me, looking back with enormous gratitude at the live performances I've been lucky enough to attend over the past year. Here are the moments that had the most impact on me, that I will treasure as we move into a new decade.

'Tis the season for making lists and taking stock of the past twelve months. As usual, this is the time when I look back with enormous gratitude at the live performances I’ve been lucky enough to attend in the Milwaukee area over the past year. Here are the moments that had the most impact on me, that I will treasure in my memory as we move into a new decade. 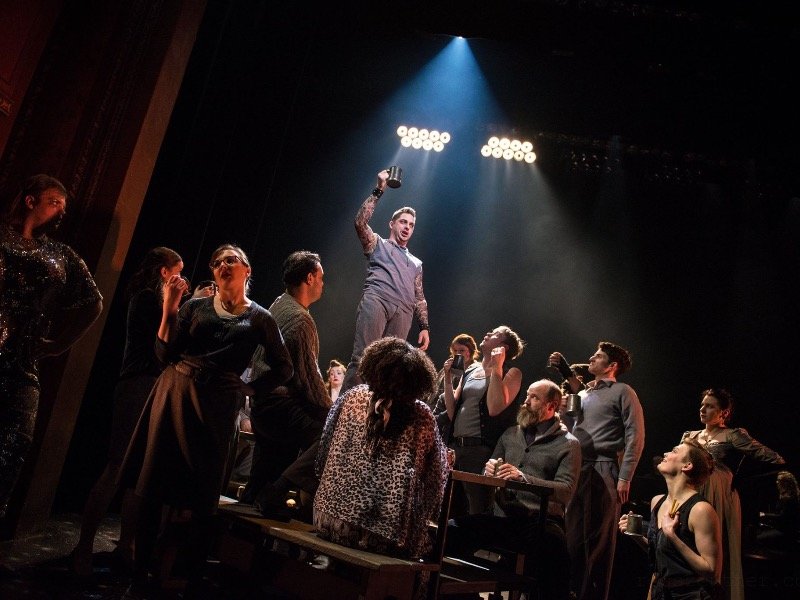 In this superlative production, director Jill Anna Ponasik used her distinct gift for translating daunting, historic opera pieces into exciting performances with a modern feel. The Cabot Theatre stage was filled by this huge Carl Orff spectacle, combining Medieval poetry, orchestral music, choirs and dance. The cast – including members of the Danceworks Performance Company, Chant Claire Artists, five young performers and six onstage percussionists – was elevated by inventive costumes (Shima Orens), striking lighting design (Jason Fassl) and projections that enhanced the colors and mood of each movement. It was an astonishing evening – a kinetic and mesmerizing experience. 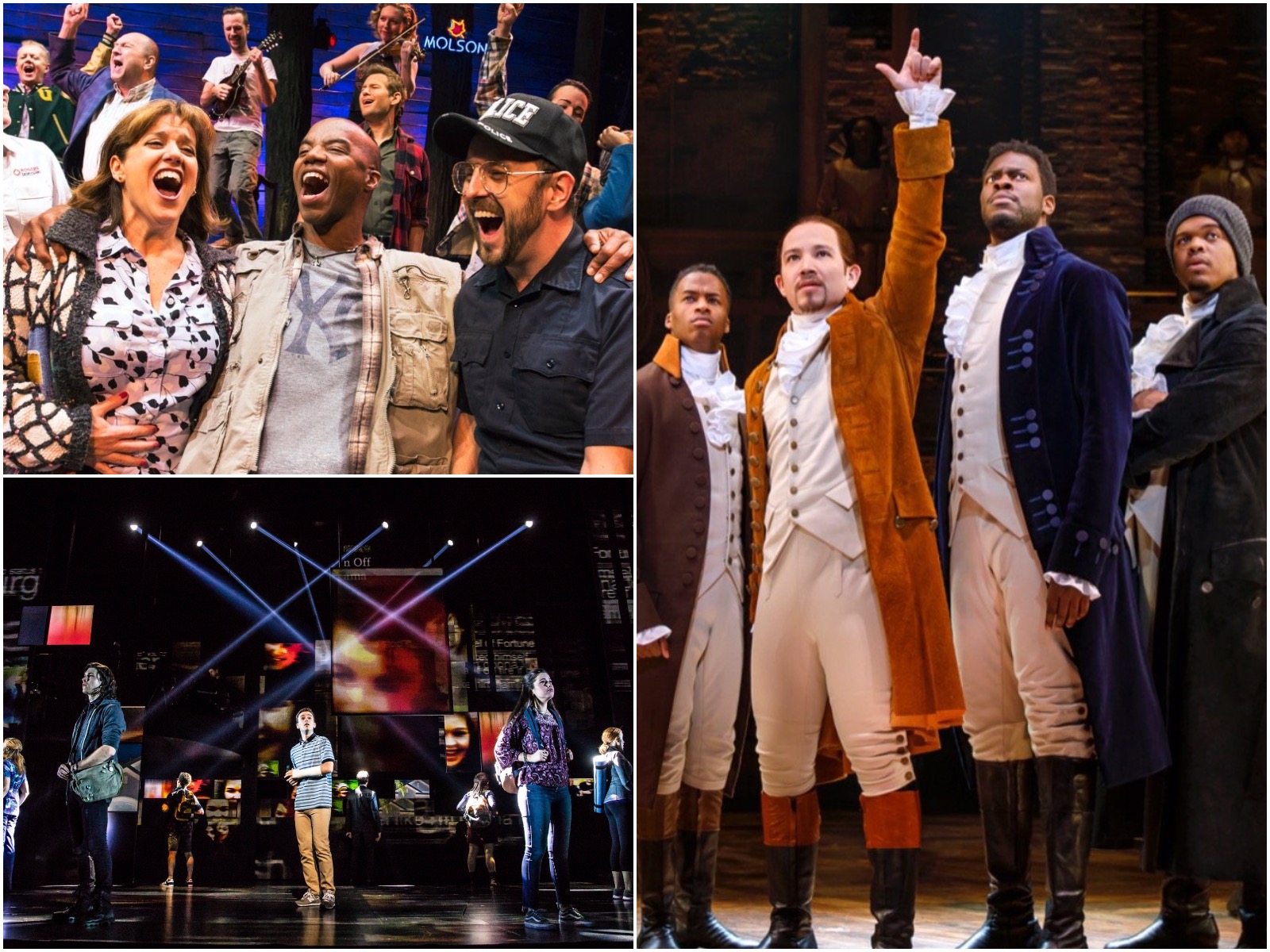 A musical about the triumph of small acts of kindness in the wake of 9/11 might sound like a corny Hallmark special, but nothing could be further from the truth. The national tour of the award-winning musical "Come From Away" came exuberantly into the Marcus Center, to the sounds of a bodhran (Celtic drum), a fiddle, an "ugly stick" and a mighty islander "screech." Based on true events in Gander, Newfoundland, the touching and beautifully executed show focused on many stories of hope, anger, despair and resilience at a dark time, and illustrated that our common humanity is so much more powerful than our differences.

With a wholly original, fast-paced, contemporary book, smart lyrics and a tuneful, pop-influenced score, "Dear Evan Hansen" was the antithesis of teen-movie-turned-musical fluff. This show examined the desperation of both young people and their parents to communicate, to connect and to feel less alone in an era with scant "family time" and a proliferation of screens. Raw, messy emotion was juxtaposed with carefully created online messages for a hard look at how technology can both bring us together and destroy us. In contrast to many Broadway properties, "Dear Evan Hansen" proved that challenging material is not only possible to include in this format, it can be transformative. I am very happy to have "waved through the window" at this amazing Wisconsin premiere.

Yes, it really was worth the wait, the money and the hassle to get tickets to see this cast and be "in the room where it happened." "Hamilton" wasn’t "just a moment, it’s a movement," and it was thrilling to see such heaps of talent on one stage, revolutionizing the American musical. At 144 words per minute, for a grand total of 20,520, audiences definitely got their money’s worth, both in the amount of content and its delivery. Sing it with me as fast as you can: "If Washington isn’t gon’ listen to disciplined dissidents, this is the difference: This kid is out!" I also take the fact that so many younger audiences are now obsessed with the show as very good sign.

Best Play about a Playwright: "How to Write a New Book of the Bible," Next Act Theatre 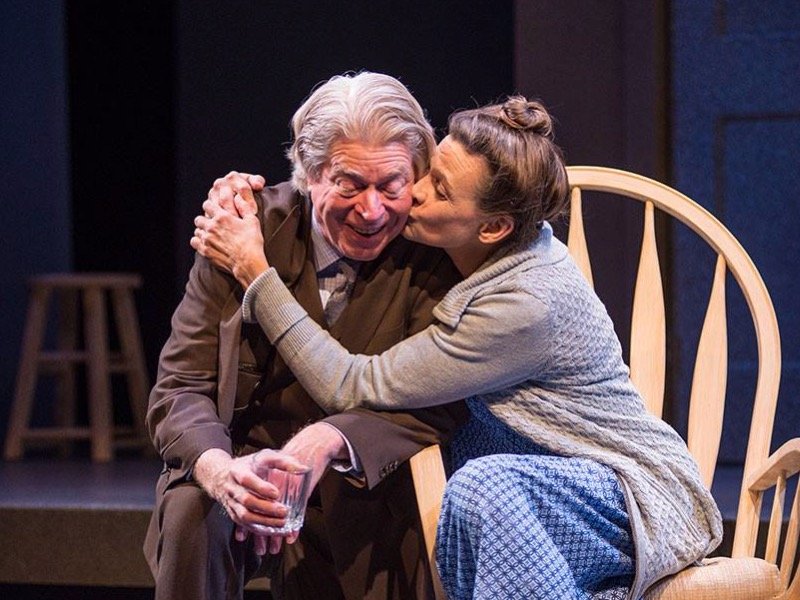 Bill Cain’s heavily autobiographical play began in well-traveled territory. His main character came home to Syracuse, New York, to care for a widowed, aging mother. But for every expected bump in the road the mother and son encountered together as the child became the caregiver and the adult became increasingly helpless, the play added texture and context, revisiting defining moments in his family history and looking for the greater meaning behind – or reconciliation with – their suffering. As both a Jesuit priest and a struggling writer, the author/main character noted more than once, "If you want to see God, look at your family." Cain (and Next Act) did an amazing job of telling this complex story about a writer with something original to say. 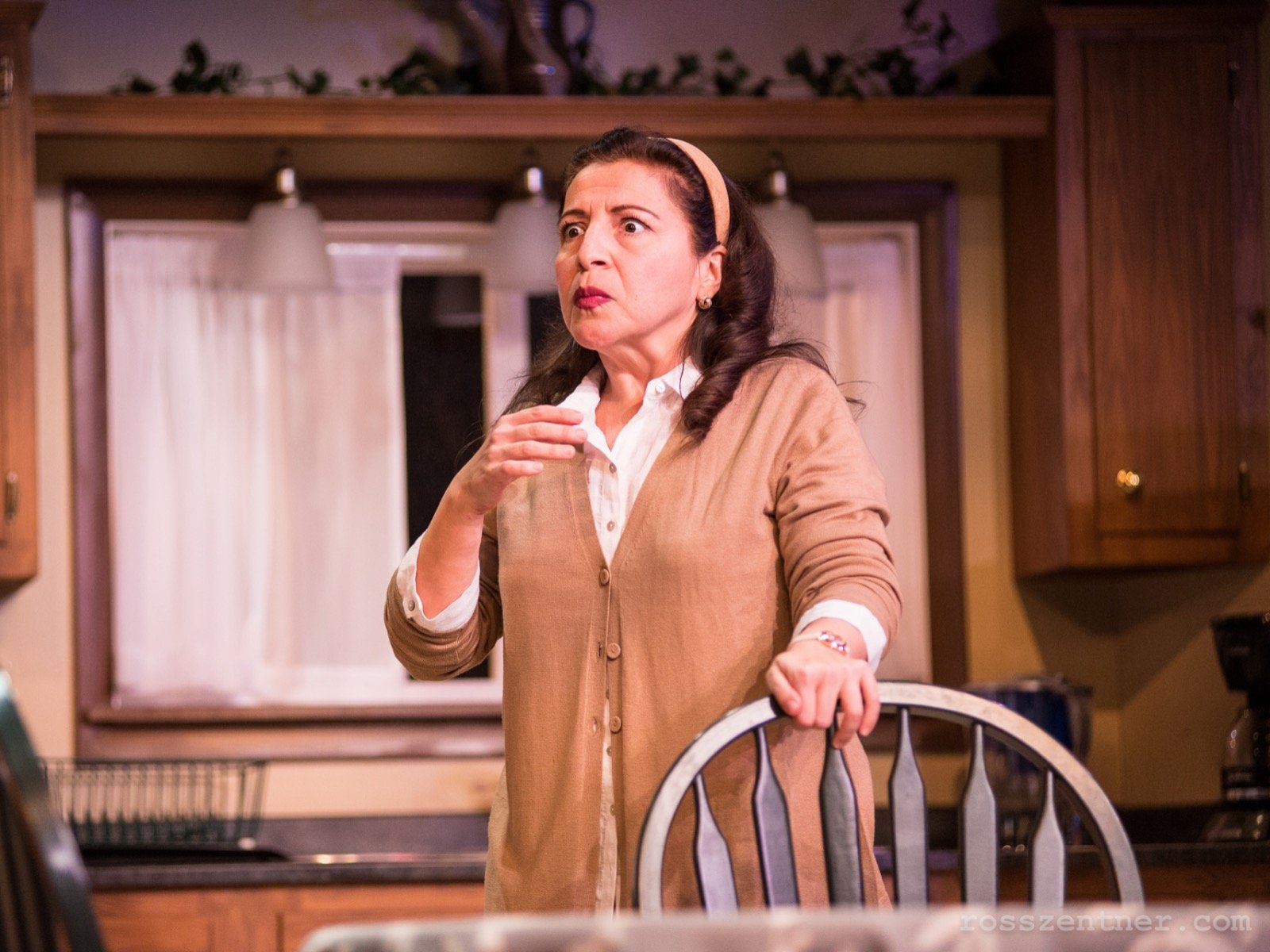 The odd couple at the center of Jen Silverman’s play was made up of two 50-something women from different worlds. Sharon (a giggly and naive Isabel Quintero) was Walmart and white bread, book clubs and leaving your door unlocked. Robyn (a cynical, standoffish Marti Gobel) was black leather boots and a motorcycle jacket, cigarettes she was trying to kick and almond milk she bought at the co-op. Sharon was chatty. Robyn wouldn’t give a straight answer. Sharon had been confined her whole life by a strict mother, a disinterested husband and a disengaged son. Robyn had so many names, so many schemes and so few limits that she was similarly lost when she looked for the structure of a law-abiding, conventional life. Putting two middle-aged women at the center of this story about freedom, reinvention and personal discovery is practically revolutionary. Making those transformations both funny and touching was a real accomplishment of this production.

Most Magical Set: "The Chinese Lady," The Milwaukee Rep 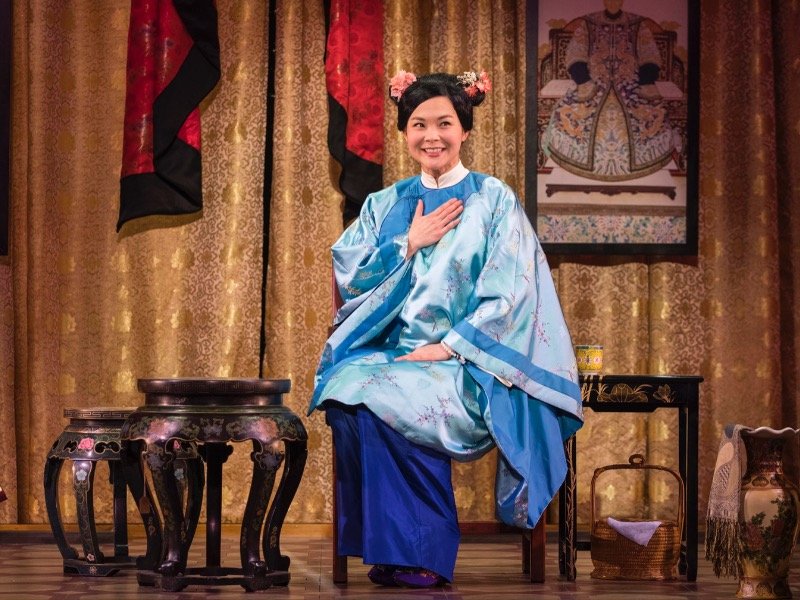 At the beginning of Lloyd Suh’s "The Chinese Lady," an enormous ornamental box is opened to reveal Afong Moy, the first known female Chinese immigrant to the United States. Used as a live sideshow attraction, she was brought to New York in 1834 as a young teen, a curiosity to be gawked at by Westerners and to help sell imported Chinoiserie. With her bound feet, chopsticks and exotic silk clothing, she resembled a mechanical toy on a vibrant red magical stage. Furnished with lanterns, art and furniture infused with Asian motifs, her beautiful surroundings grew more crass and shabby as decades went by, and her gorgeous room was revealed to be a prison. The ingenious set by scenic designer Collette Pollard allowed stunning reveals for each chapter of Moy’s story, imparting a sense of awe, curiosity and wonder, perhaps mimicking the reactions of nineteenth century audiences. 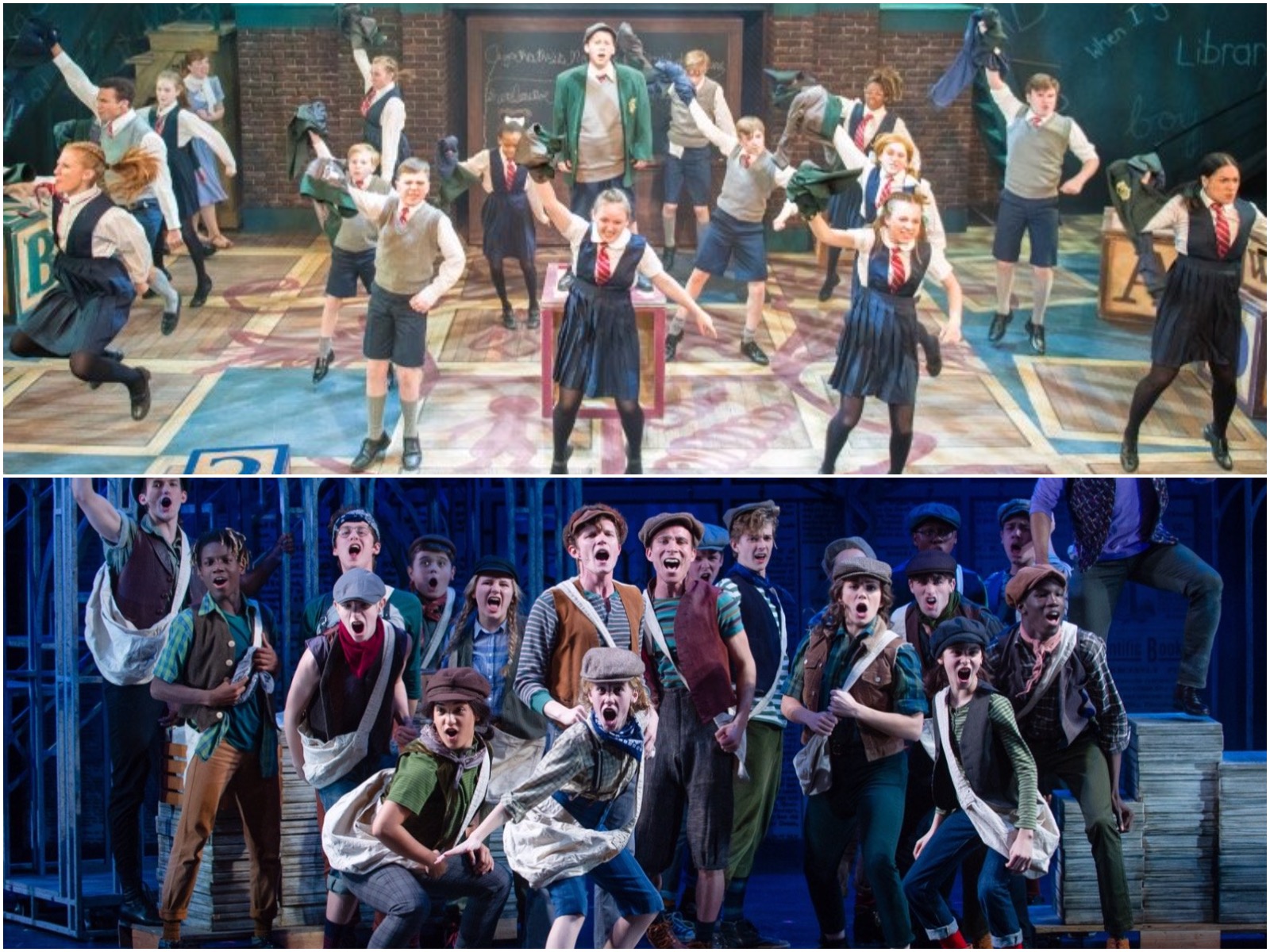 Matilda is an impossibly precocious five year-old English girl who lives in the kind of dystopian world that author Roald Dahl is famous for. Between her self-centered, idiotic parents and her sadistic and manipulative headmistress, Miss Trunchbull, Matilda had her hands full finding truth and identifying injustices in the world. When her call for revolution finally goes out, Matilda’s classmates responded en masse with a riotous spelling bee and the show-stopping song and dance, "Revolting Children." Like Annie and the gang taking over the orphanage, the next generation rose up in righteous indignation, filling the entire theater with hope for the future. Kudos to First Stage and their cast of young performers who surpassed expectations over and over in this enormous, triumphant show.

These revolting children were street kids at the turn of the 20th century, eking out a meager living selling "papes" for fat cat publishers Hearst and Pulitzer. And when the well healed media magnates tried to squeeze more profits out of their youthful salesforce, the kids had enough. With uplifting anthems and spectacular dance routines, they went on strike and stuck it to the establishment. Under the direction of Molly Rhode, the entire cast of grimy but adorable underdogs fiercely tap danced their way to justice

Most Ominous Offer of Sweets: "God of Hell," The Constructivists 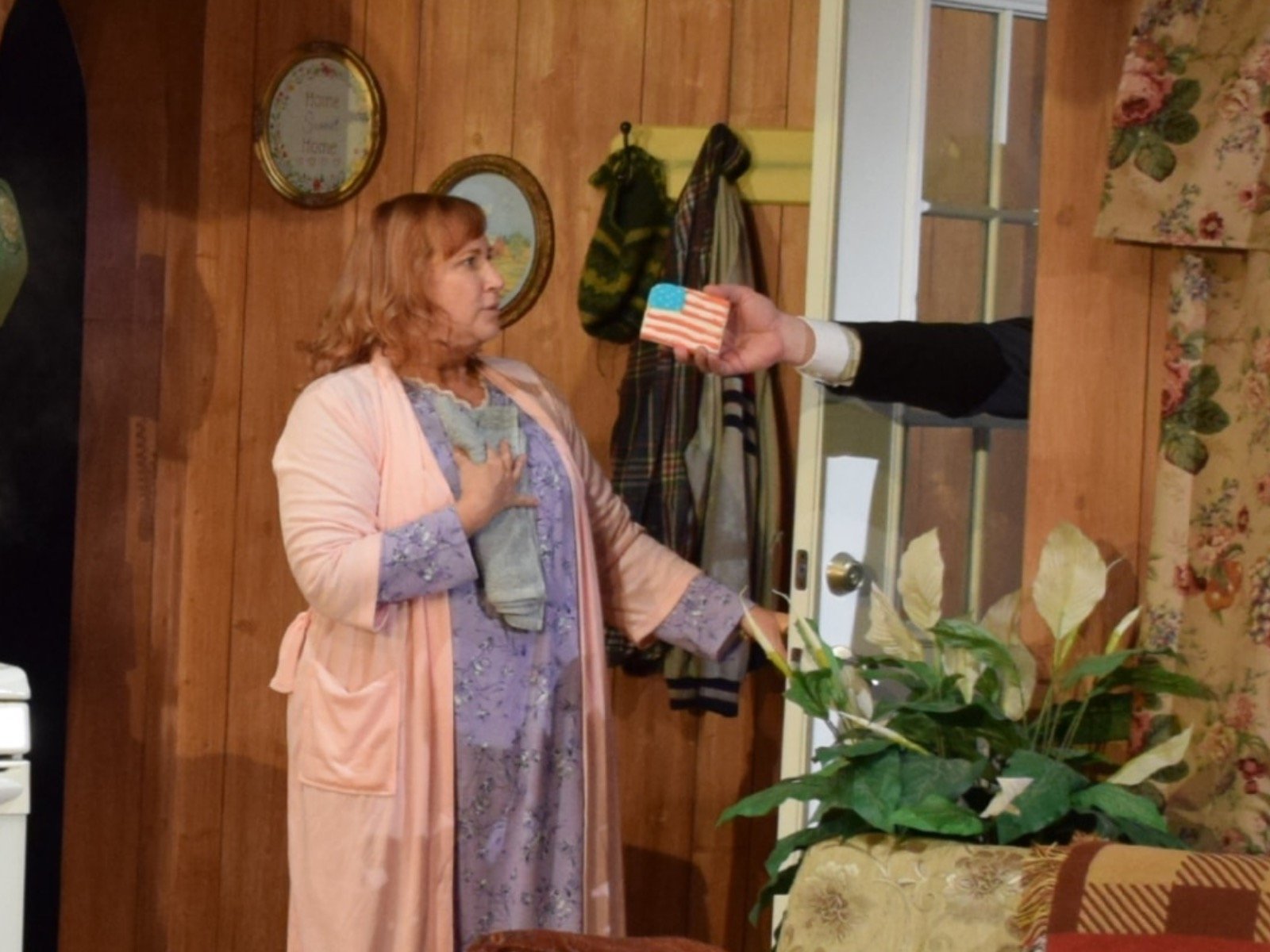 When a man in a dark suit barges into your rural Wisconsin farmhouse trying to sell you American flags and other proof of your patriotism, don’t buy it. Even if he offers you an oversized cookie decorated in red, white and blue frosting, just say no. Like the witch offering Hansel and Gretel lovely gingerbread treats, the baked goods are an easy tip-off that this government man isn’t really "here to help." He’s here to drag your friend back to a top secret prison ... or worse. Written as a cautionary tale by legendary American playwright Sam Shepard as a response to the "enhanced law enforcement" provisions of the Patriot Act, the cookie was sugar-coated bait to lure Americans into a terrifying, post 9/11 world where anyone could find themselves on the wrong end of a waterboard.

Most Arresting Docudrama: "Blood at the Root," Next Act Theatre 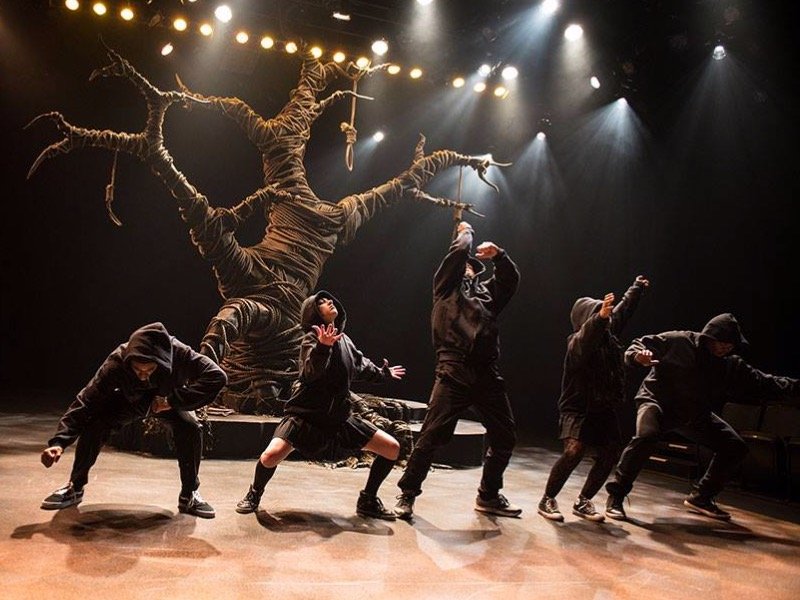 Director Marti Gobel and her young cast, led by Chantae Miller, held audiences spellbound as they performed Dominique Morriseau’s choreopoem, inspired by outbursts of racial tension in the tiny town of Jena, Louisiana, in 2006.

On an uncharacteristically hot October day, a few black students decided to sit under a tree outside their high school that was normally the territory of white students. The next day nooses appeared, hanging from the branches. Smacking of violent racism, these events sparked protests and outrage on a national scale. Through short scenes, percussion, movement, stomp dance and playful approaches to language, the performance transcended realism and became something more lyrical and ritualistic. That the true story was told exclusively by teen characters made it fresh and complicated. Hearing them ask the essential questions of how this hatred was planted, how long it had been going on and how they could stop it, was staggering. 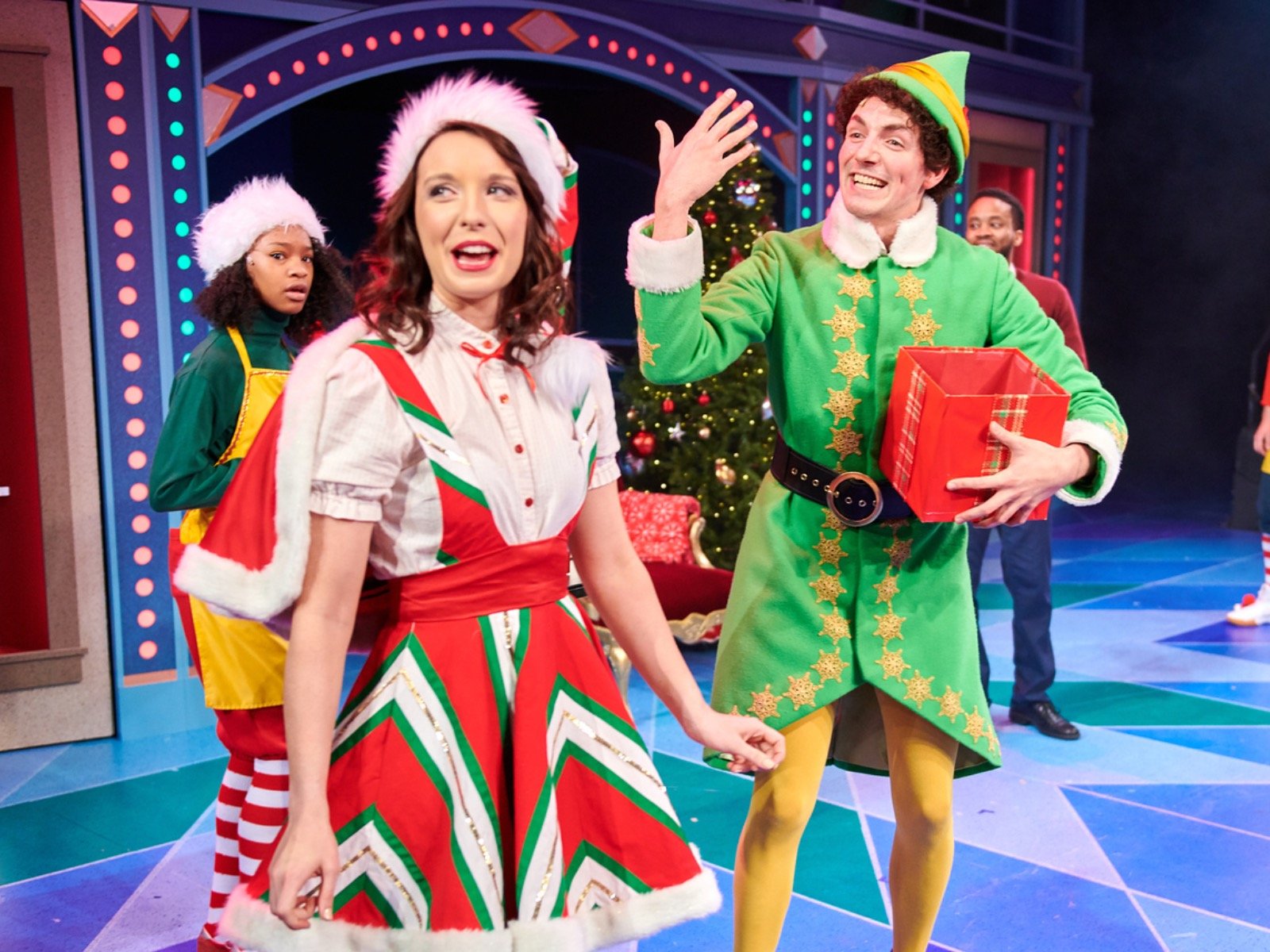 The newest holiday offering in town, First Stage’s ambitious musical "Elf" was as sweet as the syrup-doused spaghetti and triple chocolate hot cocoa that make up Buddy’s standard diet. Much of the credit for the show’s success belongs to its star Adam LaSalle, a New York-based actor who imbued Buddy with the optimism, enthusiasm and barely restrained joy of ten magical elves. Gifted with a gorgeous singing voice, the wide eyes of an innocent and a vaudevillian’s knack for comedy, LaSalle was a delight to watch as he tried first to fit in with Santa’s helpers at the North Pole (played by young performers), then with the jaded New Yorkers he meets, and finally with his human father and estranged family. Through an irrepressible delight in life, love and Christmas, he spread glee throughout New York City and even jump-started Santa’s sleigh in time for the big night. As a "sweet" bonus, a lot of that glee also left the theater, in the hearts of audience members.

Most Tuneful Farewell: "The Lipitones," In Tandem 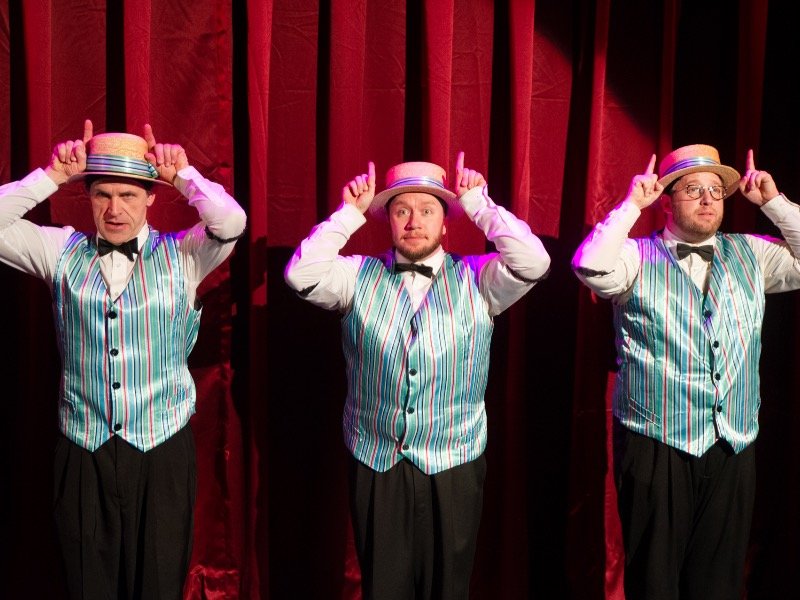 In Tandem Theatre’s last official production ensured that the company would go out on a high note. The simple, silly show tells the story of a barbershop quartet made up of old, white, small-town high school buddies slightly past their prime. When they finally win a regional contest, they're ecstatic – until their lead singer drops dead. What can the three remaining barber shoppers to do? The gang pulls together so the show can go on, even if it means working with a new singer: a brown-skinned, turban-wearing Sikh who suffers through insults and ugly assumptions from one particularly closed-minded member of the group. But eventually, with lots of personal growth, great voices, corny jokes and snappy matching outfits, actors Ethan Brittingham, Rick Penszich, Nathan Marinan and Steve Koehler won over our hearts while learning to "harmonize" in new ways. It was a lovely finale for a company that will be missed in Milwaukee.