What's in a restaurant? In this series, we ask chefs around the city to describe their restaurants in their own words and recommend three dishes that embody the best of what they offer. In this edition, we talk with Chef Paris Dreibelbis of Black Sheep.

What's in a restaurant? In this series, we ask chefs around the city to describe their restaurants in their own words and recommend three dishes that embody the best of what they offer. In this edition, we talk with Chef Paris Dreibelbis of Black Sheep.


Paris Dreibelbis has had quite the career. Raised in Dubuque, Iowa, he cut his teeth at restaurants in his hometown, but quickly moved on to pursue his culinary degree at Le Cordon Bleu in Minneapolis, moving on to work with notable chefs including James Beard Award winner Gavin Kaysen at Spoon & Stable. More recently, he moved to Milwaukee where he honed his skills at restaurants including Ardent and View MKE.

Dreibelbis is also a two time participant and 2017 winner of the Ment’or Competition; and he had the privilege of attending the 2019 Bocuse D’or Competition in France before joining the Black Sheep team as executive chef earlier this year.

"As a new chef, you spend the first couple of months getting things in order," he adds. "It’s about paperwork, costing, prep lists and staffing. After that, you get a chance to really take a look at the food. I’ve never stepped into someone’s restaurant and tried to make it my own; more often I’ve opened places from the ground up. So, I’m really taking things slowly. I come up with an idea, and when I have a bit of free time, I mess around with it. I’m finding it takes me about three weeks of refinement before it’s to a point where I’m happy with it and can put it on the menu."

But Dreibelbis says the process of refinement is one of his favorite things about being a chef.

"I really enjoy that process. In my head I’m always looking at ways to improve a dish. I like to do things people haven’t done, and I like to push boundaries. And about the time a dish is really getting to the point of being good enough, I want to take it off the menu."

As for what folks can expect from him in the months ahead, he says he’s taking his time and moving deliberately.

"This is a wine bar, so what I really want to bring to the table is bar food, but something a bit more elevated," Dreibelbis says. "There’s a place in Chicago that serves natural wines and more upscale bar food, and I really love what they do and how they do it. It’s inspired what I’d like to give people here … a slightly more refined atmosphere where people can enjoy something a bit more refined or simply drop by and order really great French fries and a drink."

Dreibelbis says that, in an effort to bring that type of experience into play, he’s not only been taking a look at each dish on the menu, but also working with the front of house staff to share his vision for the service experience at Black Sheep.

"It’s little things like water service as an opening at each table," he says. "We’re also changing up our serveware and flatware, and taking a second look at how we set each table." 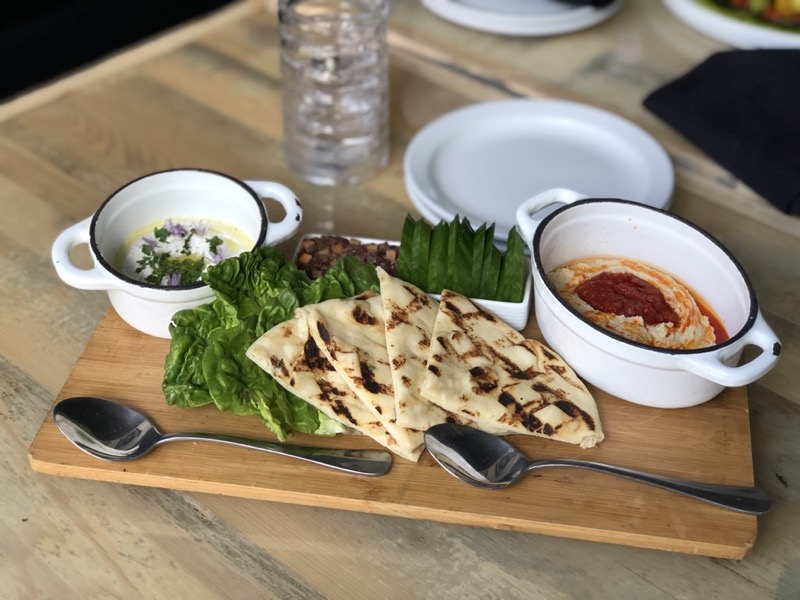 "I really liked the idea of a shareable plate that was more interactive … that had multiple components that can be combined in different ways; and the presentation here is somewhat inspired by Galit in Chicago. It begins with the server, who presents the dish at the table, removing the covers from the spreads and introducing the components: hummus (seasoned with harissa), an olive tapenade and a really flavorful labneh, which takes inspiration from Daniel Boulud when he did his Synergy Series at Spoon & Stable. From there, it’s up to the guest in terms of how they approach things. They can eat them separately, mix them together. It’s meant to be really flexible. 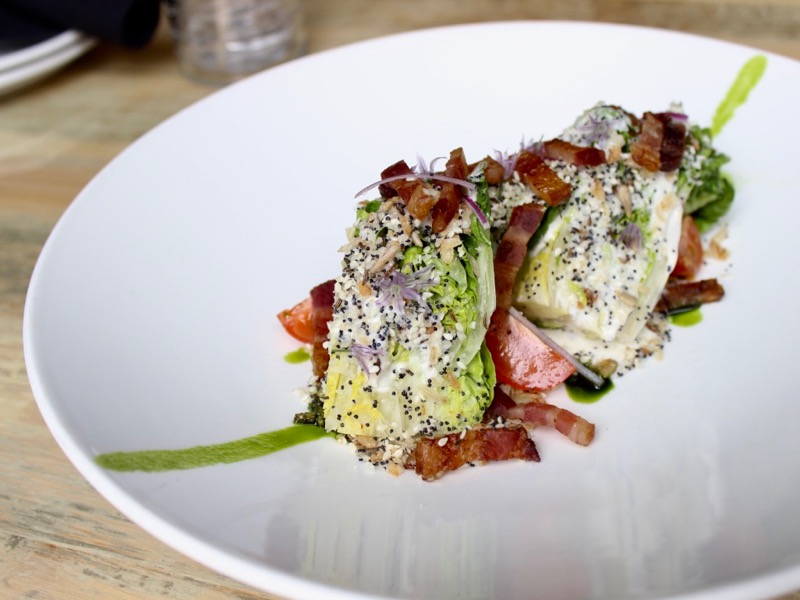 "This is actually one of the first dishes I put on the menu. I really enjoy wedge salads; which probably has a lot to do with the bacon and the cheese. And we had one on the menu; but I really saw the opportunity to bring a little bit of myself to the table.

"At Bocuse D’Or, we used Little Gem lettuce for one of the dishes in the competition. It’s beautiful and sweet and crisp with more flavor than traditional Iceberg. I paired that with a white cheddar dressing that’s inspired by a parmesan vinaigrette we made at Bachelor Farmer in Minneapolis … once I got the vinaigrette down, it screamed for Everything Bagel seasoning. From there, you’ve got all the typical components of a wedge salad … thick cut bacon, tomatoes …" 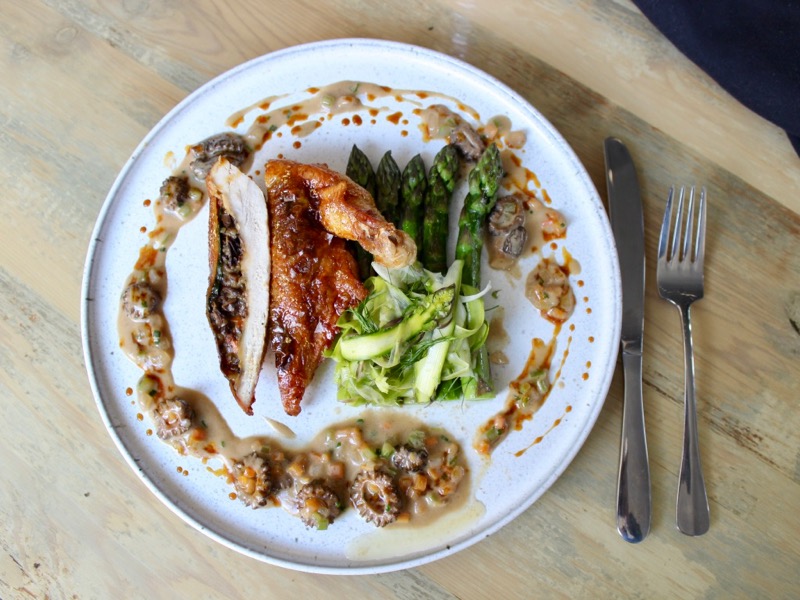 "There’s a ton of inspiration here. One of the very first chicken dishes that I ever made as a young chef was a chicken Marsala. So, this dish is a little like a "see where I’m at dish." I took the sauce from Marsala and constructed it in a way that we could adjust it for diners with dairy allergies … and it plates really beautifully. I paired that with morels … a really seasonal component that I grew up eating in Iowa. They’re plated with the sauce and also combined with cremini mushrooms for the stuffing in the chicken.

"I went through a few versions of the stuffing. An initial version tasted too much like Thanksgiving, but this one is more like duxelles. From there, we have an asparagus salad ... it offers bright citrus and a bit of acid for balance, and I really enjoy how the fennel plays against the flavor of the asparagus. I also added a bit of fennel to the stuffing, so it mirrors that flavor a bit."