In this series, we ask chefs around the city to recommend three dishes that embody the best of what they offer. In this edition, we talk with Dream Dance Steak Chef Chase Anderson about his takes on their new dinner menu.

What's in a restaurant? In this series, we ask chefs around the city to describe their restaurants in their own words and recommend three dishes that embody the best of what they offer. In this edition, we talk with Belfrē Kitchen's new executive chef, Amado Casanova, about the way he knits together local produce with globally inspired flavors.


"Dream Dance Steak offers a variety of fine dining options," notes Chef Chase Anderson, "But, first and foremost, we’re a steakhouse. And part of that, on my end, is really going out and finding the absolute highest quality beef possible. In the process of creating our new menu, we’ve visited at least 16 farms and tasted at least 20 different types of beef from domestic Waygu to dry aged beef. In the end, what we’ve made sure to do is to really define the specifications on our cuts so that guests aren’t getting any unnecessary fat or sinews; instead, they are getting more quality beef for the price.

"Recently we’ve moved to an a la carte menu. That’s a reflection of a new way of dining, which allows people to really control the type and the amount of food that they consume. Traditionally, a la carte offerings are perceived as being more expensive; however we’ve really striven to create a menu where there is more flexibility in terms of what guests can order, as well as pricing items in a way that passes cost savings on to the guest.

"In the end, the goal is to create a place where people can really step off the floor of the casino for a while, let go of their cares and experience the highest level of service. We want them to relax, enjoy a glass of wine and a great meal."

"I’ve always really enjoyed summer, and this starter is a bit of a nod to both the summer months and barbeque. I wanted to feature a beef rib that was tender and smoked; but I also wanted to give it a unique flair. As we worked our way through spices and flavor profiles – including experiments with pastrami blends and masalas – we found that none of them really had the strength to really cut through the smoke. Ultimately, we happened upon a tandoori blend that worked well against the backdrop of the smoke.

"If you think about the flavor profile in Wisconsin bratwurst there are notes of juniper, pepper and garlic and warming spices like cinnamon and sometimes nutmeg. And, in some ways, they’re reminiscent of those found in Indian fare. We balance out the dish with the carrot-cumin slaw; it’s bright and refreshing and it cuts through the richness and fat of the short rib. Meanwhile, the apple barbecue sauce is familiar and comforting, very reminiscent of the type of sauce you’d find anywhere in Wisconsin." 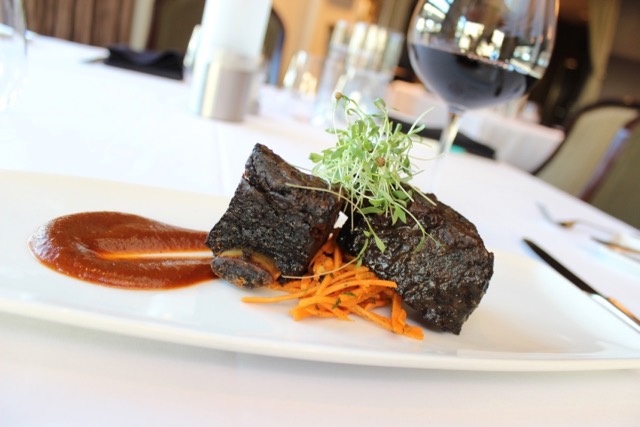 "This cut is a big seller at Dream Dance, and it’s really become a signature. It’s 22 ounces of meat, so there’s nothing about it that’s subtle. It’s a hungry man steak that takes up an entire plate all on its own. We begin with a high quality piece of meat that’s simply seasoned and broiled using a double decker Montague broiler. That builds a nice seasoned crust on the steak. From there, it’s coated in buerre monte (garlic butter). It’s juicy and glistening and flavorful." 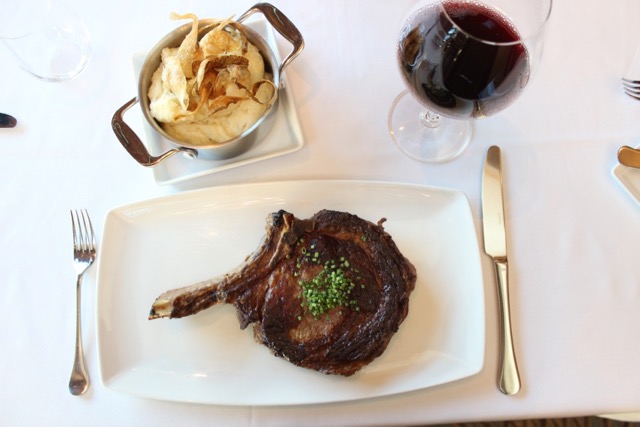 "I have gotten really into indigenous foods of the Americas thanks to working with chefs like Sean Sherman and and Nephi Craig. As a result, I’ve become really interested in incorporating those things into my cooking. This dish is a modern nod to some of the indigenous foods of Wisconsin. First, there’s the salmon. We use Norwegian salmon because it’s the highest quality farmed product you can get; but salmon was prevalent in the great lakes and harvested in great quantity for a long time.

"Similarly, spinach is a plant that grows in its wild form throughout the state. We also feature wild rice; ours is hand-harvested in Wisconsin and Minnesota. Even the maple mustard sauce is both a nod to the wild mustard that grows throughout Wisconsin as well as the maple syrup that’s harvested each spring. On a personal note, I eat eight ounces of salmon every day for the health benefits, and this is a preparation that would appeal to me if I were eating in a restaurant." 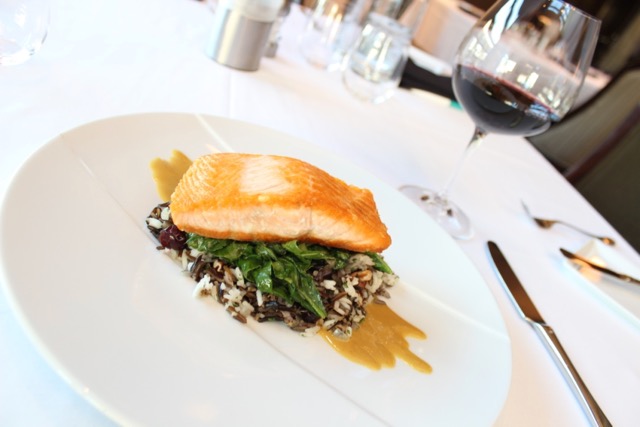 Dream Dance Steak is open Tuesday through Thursday from 5 to 9 p.m. and Friday and Saturday from 5 to 10 p.m.