In this series, we ask chefs to recommend three dishes that embody the best of what they offer. In this edition, we talk with Guy Davies of Good City Brewing about creating food that pairs well with beer and creating a restaurant experience in a brewery.

What's in a restaurant? In this series, we ask chefs around the city to describe their restaurants in their own words and recommend three dishes that embody the best of what they offer. In this edition, we talk with Guy Davies of Good City Brewing about creating beer-friendly internationally inspired dishes.


"It’s been a real journey for us this year," notes Chef Guy Davies of Good City Brewing. "We didn’t really know what was going to happen when we opened. People come here because they want to be close to the source. So my goal is to really allow people to experience the beer, and the brewery, and then give them food to enjoy that really complements that. It’s like a daily beer dinner here; the things that we create in the kitchen really need to go with the beer really well.

"From the beginning, it was also our intention for this to be an approachable place that really appeals to a lot of different people. So, the menu reflects that. We have a balance of everything from meat dishes to vegetarian. I’m not the sort of person who needs to eat meat every day, so I like for the vegetarian options we have to be equally as exciting and nourishing as anything else on the menu.

"The comfort aspect of this place is also something that I keep in mind. I never want to go outside of peoples’ expectations. I want them to be comfortable, both in the space and with the food that we offer. But, as a chef, I also have this desire to give people something new, a new flavor or a new experience that they may never have had." 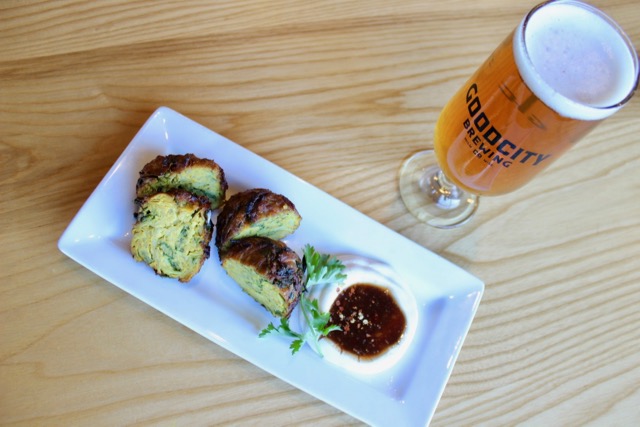 "I see this as pure comfort food. At its core, it’s kind of like haystack onions, but with a lot of different flavors thrown in. They’re basically onion fritters that are made with chickpea flour. There’s spinach and then a number of spices including coriander, cumin, turmeric, garlic and two different kinds of paprika: a smoked hot and a smoked sweet.

"This is a dish that took a really long time to get right. But, I started with the flavor profile and then worked on the technique, getting it down so that we can execute it efficiently in the kitchen. I’ve always been inspired by cultures that have vegetarian staples, and that’s true of India. They have so many dishes that pair so well with beer.

"We have a few Indian-inspired flavors on this menu, and so far they’ve gone over really well. Our house fries are seasoned with a Vadouvan curry, and people really love them." 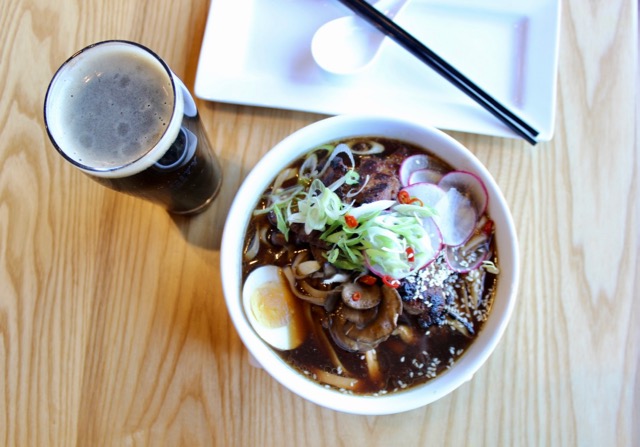 "This is based on the same concept as a ramen or pho. The broth itself is similar to a beef pho. It’s made with a brown rice miso, which gives it a really nice flavor and depth that really complements the beef. But, the dish really began with the pork, which is a traditional char siu.

"I’m the sort of person who spends hours and hours scanning through all the different ingredients in the Asian grocery store. And years and years ago, I remember discovering this packet of char siu powder. It was a bright red packet and there was all sorts of ingredients in it, but I took it home and it was delicious. Ever since then, I’ve been working on recreating my own version of it.

"The recipe I’m using has honey as its base, some hoisin and a number of different spices, including five spice powder. I’ve added a lot of bright flavors, earthy maitake mushrooms and fresh scallions, radish and a little bit of chili. It’s comforting. And it’s warm. And it’s perfect for this time of the year." 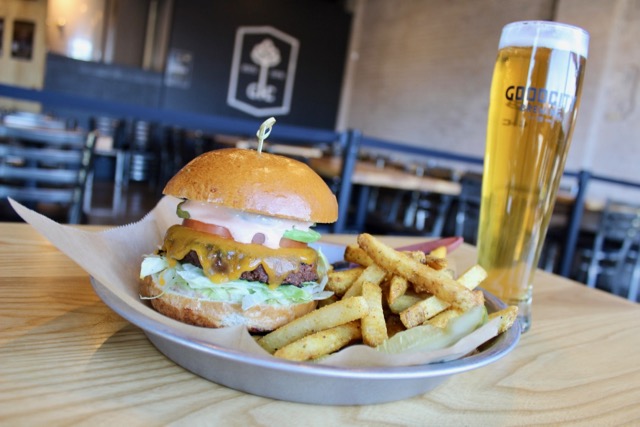 "The journey to this burger started about a year ago. I read about this product from Impossible Foods. They’d created this meat substitute that was created to be sustainable and reduce the huge carbon footprint involved with raising beef.

"Personally, I was excited about it. I really wanted to taste it, but I couldn’t get it anywhere. So, it became a sort of a quest. When I finally got a hold of it, I think I expected it to be not so good. But, I was really impressed. And I presumed that, if I was interested in it, that other people might be too.

"We make really good burgers here. We use fresh ingredients. Our dressings are made in house and our buns are fresh from Sciortino’s. So to be able to offer something that was vegetarian that was just as good as any other burger on the menu, that was important to me. And so far it’s really surprised me; people are really enjoying it."