What's in a restaurant? In this series, we ask chefs around the city to describe their restaurants in their own words and recommend three dishes that embody the best of what they offer. In this edition, we talk with Chef Jed Hanson of MOTOR Bar & Restaurant.

What's in a restaurant? In this series, we ask chefs around the city to describe their restaurants in their own words and recommend three dishes that embody the best of what they offer. In this edition, we talk with Chef Jed Hanson of MOTOR Bar & Restaurant.

Jed Hanson grew up in Shorewood, and – like so many chefs – he admits he didn’t quite know what to do with himself after high school. So he took a job selling tires and auto parts at a car dealership.

"I was probably the youngest guys working there," Hanson says. "And there was a point when some the guys I worked with told me: ‘Go do something you’re passionate about or you’ll end up old and bitter like us.’"

The remark struck a nerve. "I’d grown up cooking with my mom, and I always liked it. So, I thought it would be worth trying. It was new, different, and it wasn’t a 9 to 5. I was in my early 20s when I started working in the kitchen at The Grove Restaurant in Elm Grove and I had zero cooking experience; but I was hired on as a saute cook. So it was straight into the fire right away.

"Fortunately, I trained with chefs that were really experienced and great at training green kitchen staff. So, they taught me knife skills, cooking styles and methods, and they gave me some leeway in terms of creativity. They knew I was serious about working, but they really took a chance on me. I got really lucky."

While working at The Grove, Hanson earned his culinary degree at MATC. From there, he worked the line at Hotel Metro under Chef Jerry Garcia and furthered his education in fine dining at River Lane Inn. When he needed a break from traditional kitchens, he helped open the Big Daddy BBQ concept at Bay Shore and took a job as kitchen manager for Marcus Theaters.

By 2016, Hanson says he had his mojo back. So he joined the team at MOTOR, working as sous chef under former executive chef Josh Petersen. The position recharged his creativity and by fall of 2018, he was promoted to executive chef.

"The best part about my approach to cooking is my personal experience growing up with comfort food and cooking with my mom," he says. "She was cream sauces and butter and meatloaf and all those things. So, here I can combine my culinary education with those things. I love deep-frying things and creating dishes that are over the top. Harley is an over-the-top brand, so it’s a good fit. That’s my wheelhouse, and I can really have fun with it."

"We’re looking at some bigger menu changes as we move into spring and summer. We’re looking at adding a number of new sides, maybe potato salad, corn on the cob… down home things you’d eat at a friends’ house. We just rolled out a new smoked tri-tip, so we’ll be looking at how to evolve that, make it better. I’d also love to go a little bit more local with the products we’re bringing in." 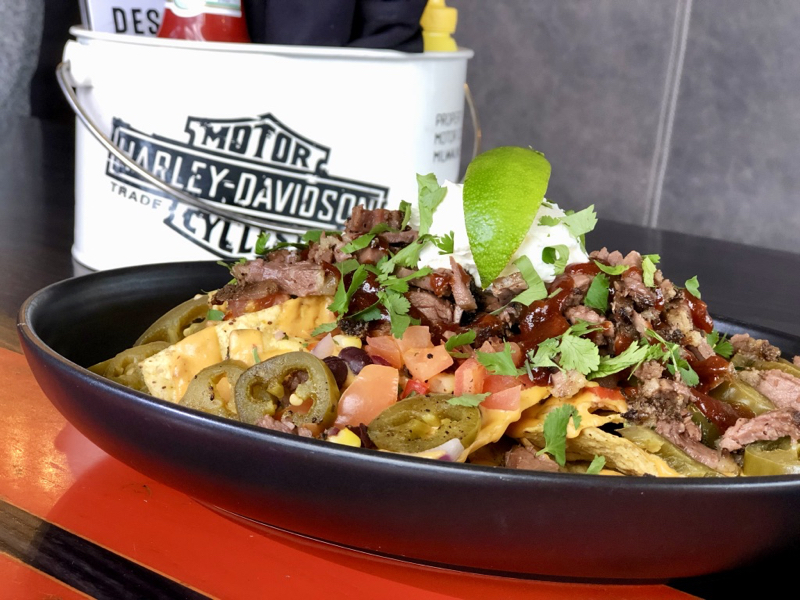 "These are a dish that’s been on the menu for a while; they came about when we started smoking meats in-house and added brisket to the menu. They were a fan favorite from the beginning, and we haven’t had to change them much. At this point, they're a MOTOR classic."

"We’re very much a scratch kitchen here, so we’re making everything. The brisket is smoked on premise and shredded. We make the cheese sauce from scratch, and here we’re using it mixed with chipotle puree. We finish things off with a smoky sweet barbecue sauce; some folks think that’s a little weird. But it’s really good, And in the end it represents us; we’re a barbecue place."

"How can a big plate of barbecue nachos be anything but Harley?" 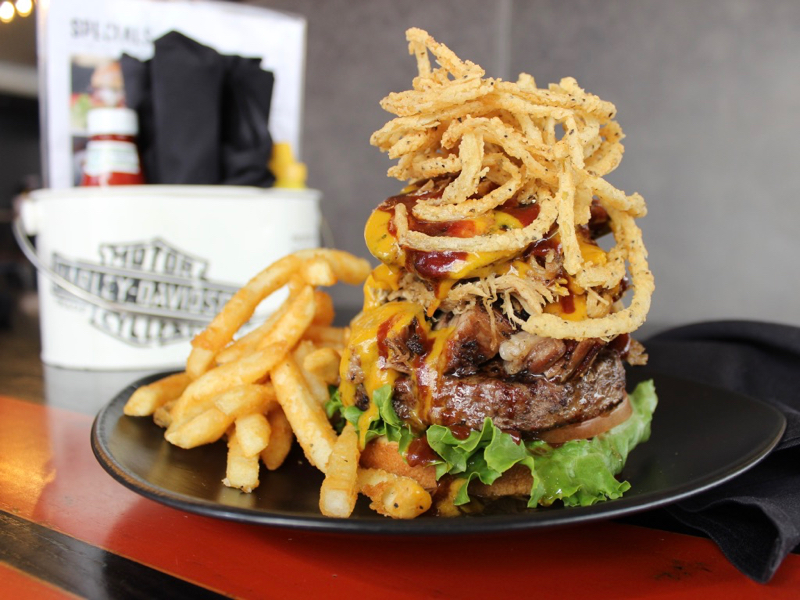 "We have great burgers. They’re hand-pattied and we top them with really fresh ingredients. But we didn’t really have anything with a wow factor. I wanted something that – when it hit the table – gave people a real "wow" moment."

"Essentially, I took all the meats I could fit on a burger and put them on there. It’s huge; but it’s not random. It’s very planned. The meats are quality and they go together well. If you can fit your whole mouth around it, you really experience the full flavor combination. Honestly, though, I can’t do it. I just have to decide what flavor I want in what part." 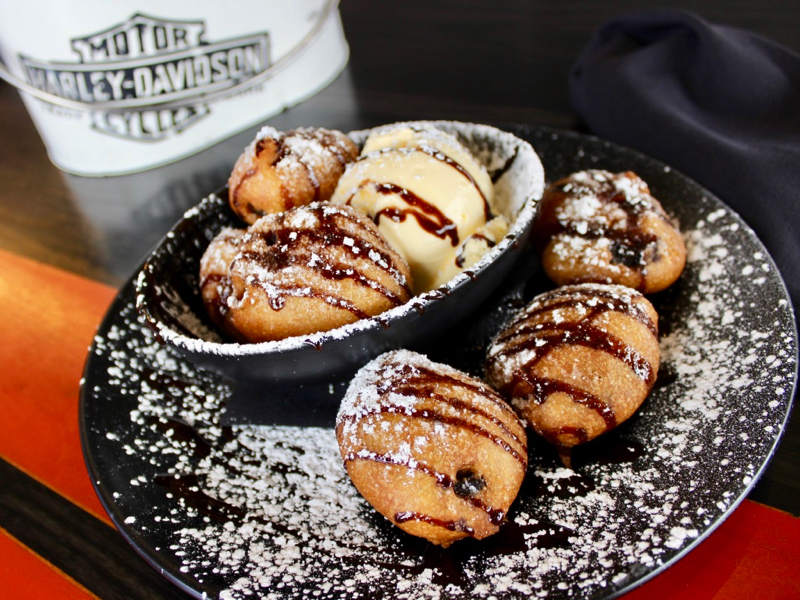 "I wanted to showcase this one because it’s the first dish I brought to MOTOR. In fact, it came about in the first few weeks I was here. I was just playing around with frying things and they happened. I was very proud of myself and I was a little disappointed to find out that it was already a State Fair thing."

"What I love about this is … when I eat an Oreo, I always dunk mine into milk. And I leave them there until they are really soft … practically dissolved. When you roll them in pancake batter and fry them, they get that same cakey texture. It’s a cool way to eat them."