Chef Joe Schreiter notes that the menu at Mistral aims to showcase unique Mediterranean flavors. However, it does so in a way that's both flexible and familiar.

What's in a restaurant? In this series, we ask chefs around the city to describe their restaurants in their own words and recommend three dishes that embody the best of what they offer. In this edition, we talk with Mistral's executive chef, Joe Schreiter, about the sort of food he’s putting on the table.


"When we set out to open a Mediterranean inspired restaurant," notes Chef Joe Schreiter of Mistral, "I did a lot of research on North African and Eastern Mediterranean fare, places that aren’t necessarily the first that people think of when you talk about the Mediterranean. I also really wanted to push myself to learn about different cuisines, spices and use them in a wider variety of ways.

"From a culinary point of view, I wanted to offer dishes that are really unique, with ingredients you don’t see anywhere. But I wanted them to be presented in a way that’s comforting and familiar. Philosophically, I don’t approach dishes in terms of being authentic or inauthentic; instead it’s about really pulling the flavors of the Mediterranean into dishes in ways that may never have been done.

"The menu is created to be flexible; I wrote it in a way that would appeal to just about any diner – whether it’s a destination diner or someone who’s coming here to see a movie. The starters on the menu work just as well as small plates. We have folks who come in and strictly order starters. I’ve also created entrees that aren’t so gigantic that you can’t eat anything else; but they’re also substantial enough that they are satisfying for a diner who orders them as a full meal.

"This space was also created to be accommodating. We have cozy places where you can enjoy a private or romantic dinner; but we also have plenty of places where diners can be part of the full energy of the restaurant. Even the bar was made in such a way that it’s really comfortable for dining." 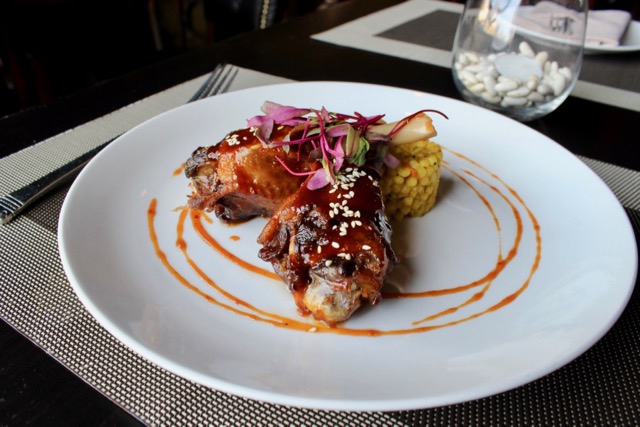 "The duck wings are an example of a dish that’s both unique and familiar. The texture is very similar to a short rib, and the sauce rings of classic barbecue sauce. But it incorporates black garlic and sherry and a number of spices that really make it unique. This probably isn’t a dish you’d see often in the Mediterranean, but its tied to place through the ingredients used." 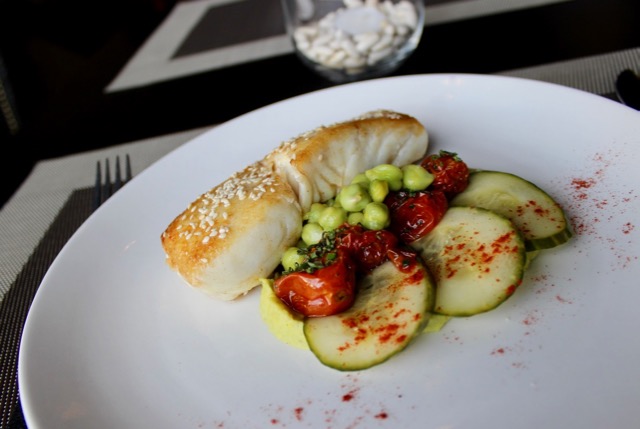 "This is a play on a Mediterranean hummus dish. We’re using green garbanzos for the hummus component, and we’ve added pickled cucumbers and demi-sec tomatoes along with pumpkin seed oil in lieu of the traditional olive oil. I really love a great hummus plate with all of the toppings, and I really wanted to play with that in a composed dish. In the end I really felt like halibut would go really well with that." 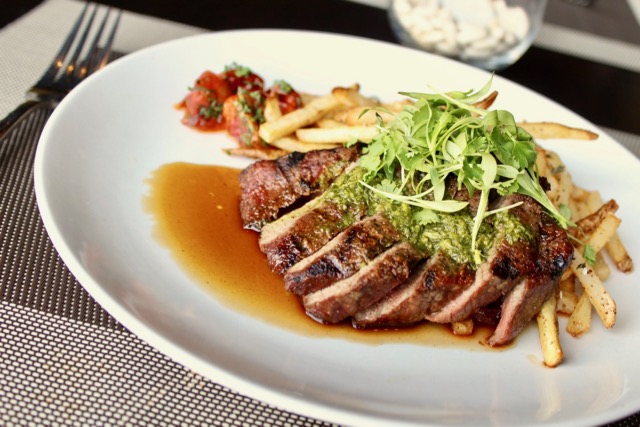 "This is another twist on a classic. The frites are tossed in a za’atar seasoning, and the steak is tossed in chermoula. I’ve always been a huge fan of any type of cilantro-type sauce on beer. Chermoula is a pretty close relative to chimichurri, but it uses a number of more robust spices.

"We use a flat iron steak from CDK Farms; they’re super flavorful, and flat iron is my all time favorite cut. The texture is really nice and the flavor is really beefy. The sauce makes the dish pop, and then there’s a classic demi glace underneath, which brings the dish back down to the ground again."