3 Dishes: Dane Baldwin of The Diplomat

In this series, we ask chefs around the city to recommend three dishes that embody the best of what they offer. In this edition, we talk with Chef Dane Baldwin of The Diplomat about his new restaurant and some of his can't-miss dishes.

What's in a restaurant? In this series, we ask chefs around the city to describe their restaurants in their own words and recommend three dishes that embody the best of what they offer. In this edition, we talk with Dane Baldwin, chef and owner of The Diplomat, about the type of restaurant he aspires to create and the dishes that embody his vision.

"I remember being 24 and thinking: ‘I’m gonna open a restaurant.’ And I kept saying that. At 28 and 30. Anyone who knows me knows that’s that’s always been a goal. I’ve had great mentors; I’ve worked with so many great people and I’ve had so much formidable training. But, this is definitely where my career was destined to go. And owning your own place: it’s about learning what you don’t know.

"As a chef, you want to play with really unique ingredients, but you gain peoples’ trust by doing things that are somewhat familiar. And once people get used to your roasted chicken or your gnocchi, you can start introducing things that aren’t quite as common. For instance, I’m not going to put a tripe dish on the menu right now; but once people are familiar, it might be something we introduce later on.

"Our whole goal is to be completely approachable, affordable and comfortable," says Diplomat Chef and owner Dane Baldwin. "And it’s perfect, because that’s really the feedback we’re getting from guests when they visit. Places like Hinterland, Odd Duck, Goodkind, Dandan … you feel the honesty as soon as you sit down. We’re still developing our personality here, but overall that’s our ultimate goal.

"A lot of these dishes are technique driven. They’re very simple, but you really have to pay attention to get it right. In this case, it’s about cooking the lentils just until they’re done so they're tender, but each one is still distinct. I’ve been to a couple of places where I’ve been wowed by a lentil dish, and in some ways there was always this desire to recreate one myself. We’re using heirloom tomatoes, because they just have great flavor. And while there are some great canned tomato products, there’s nothing like great tomatoes during tomato season. There’s a little bit of butter in the dish, which adds richness ... and tomatoes and butter … well, they’re the bomb together." 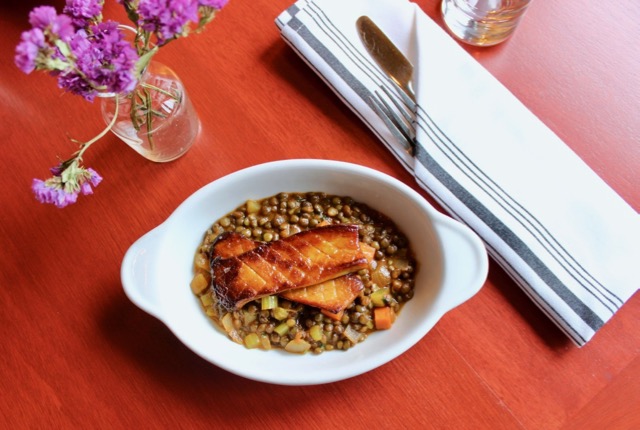 "My career really started at Gil’s. And Gil [Rasmussen] comes from an Italian heritage. I’ve worked at an Italian grocery store. I’ve worked at Bacchus. I, myself, am Sicilian; but, I don’t necessarily have this long history of the experiences of Sunday dinners or cutting pasta. But it seems there’s always been this strong Italian influence throughout my career, and I've worked extensively with polenta. For this dish, we’re using the American version: grits. I’ve made versions over the years using the soft egg and bacon; I really love the flavor of pancetta in this case. The cave aged cheddar is almost parmesan-like in its texture; it adds a nice flavor, but it also mirrors the pancetta in terms of adding a little bit of funk." 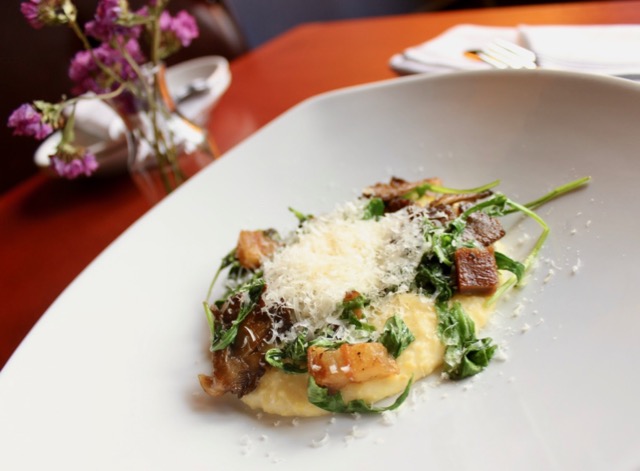 "Chicken and waffles is so huge now; I ate chicken and waffles at Roscoe’s [House of Chicken & Waffles] a couple of years ago, and it was really cool. The chicken and waffles were really good, but part of it was that you just got kind of wrapped up in being there in this iconic spot. And this dish really, interestingly, has some of the same components. You get a bit of sweetness from the apple butter. We also reduce the simple syrup from the apples and we apply that to the chicken as its roasting, so the sugars caramelize and give the chicken a really nice lacquer on the outside. The biscuit is a buttermilk biscuit that’s buttered and toasted and broken up into pieces and served with the dish." 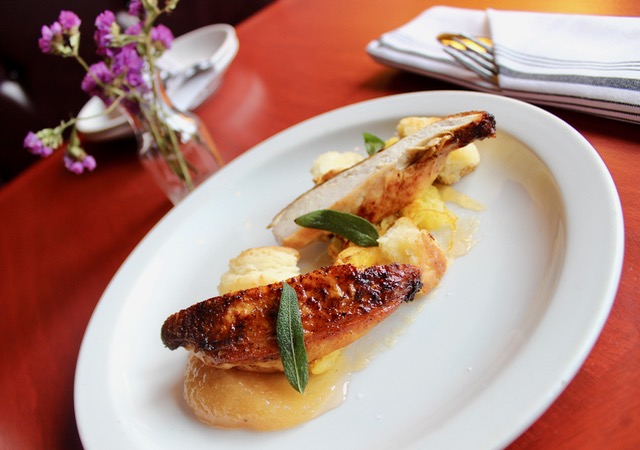