Only in Wisconsin: 4 outrageous cheese curd recipes you've got to see

If you live in Wisconsin, there is a very high likelihood that you love cheese and cheese curds. But it's possible none of us loves them quite as much as Nick Chipman, who spent his summer creating four outrageous recipes using some of Wisconsin's best.

But it's possible none of us loves cheese curds quite as much as Nick Chipman of DudeFoods.

"I feel bad for people who live in cities where they don’t have access to fresh cheese curds," says Chipman. "I mean, if you’ve never bitten into fresh squeaky cheese, you just haven’t lived. I’m sure some other people would say things like that about like ... truffles. But honestly, I’ve had truffles. And cheese curds are better."

And he isn’t lying. In fact, this past summer, he was charged with creating three outrageous recipes showcasing the sheer brilliance of the Wisconsin-made squeaky cheese curd. And his recipes are doozies.

First up was his outrageous bacon wrapped cheese curd bun cheeseburger. The recipe features a burger encased by a bun made entirely from cheese curds wrapped in a woven cloak of crispy bacon.

"I made a burger recently that had deep fried wheels of cheese that were breaded in panko, and that was good," he says. "But this version was even better because, one, fresh Wisconsin cheese curds and, two, bacon."

Chipman says the recipe turned out on the first try, largely due to the ingenious decision to build the cheese curd bun using a springform pan as a mold.

"On the upside, even if it took five tries, I wouldn’t have been sad about it because you’re left with a bunch of melted cheese and bacon," he remarks with a smirk. "And it actually tasted good."

His second creation combines two of his favorite foods: Doritos and cheese curds. 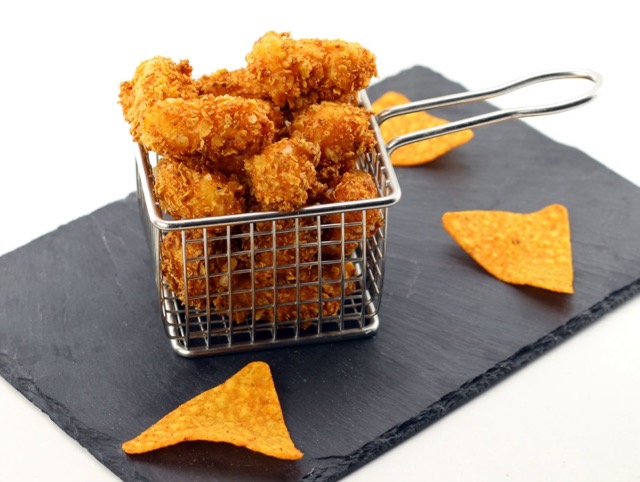 "I’m always breading stuff in Doritos," says Chipman. "It worked really well with chicken strips. I also made a burger that was breaded and deep fried with Doritos. They served it at Leff’s [Lucky Town] for a while as their burger of the month."

But you can’t just go around rolling things in Doritos and expecting perfection, Chipman says. There is a trick for getting crushed Doritos to really adhere to the food you’re breading.

"You need an egg wash and then you roll them around in Doritos," he explains. "And you have to repeat it a couple of times. The cool thing about cheese curds is that if a little cheese is oozing out, that’s totally acceptable."

When it comes to eating the nacho-ized cheese curds, Chipman recommends a dip in some good old fashioned ranch dressing.

When it comes to pizza, cheese is key. But for this recipe, Chipman was out to make one of the best personal-sized pizzas ever.

"Everyone agrees that pizza with cheese stuffed into the crust is awesome," he says. "The only problem with it is that you have to eat through the entire slice just to get to the part that’s packed with cheese."

Solution? Make the entire crust out of cheese.

"Last year, I made a pizza with cheese balls for a crust," he explains. "The cheese oozed down in between and held everything together. So you could cut it into slices and everything. But like most things in life, it’s better with cheese curds."

How do you follow a personal-sized pizza with a cheese curd crust? Apparently, you go classic. After all, how can you resist cheese curds covered in bacon? 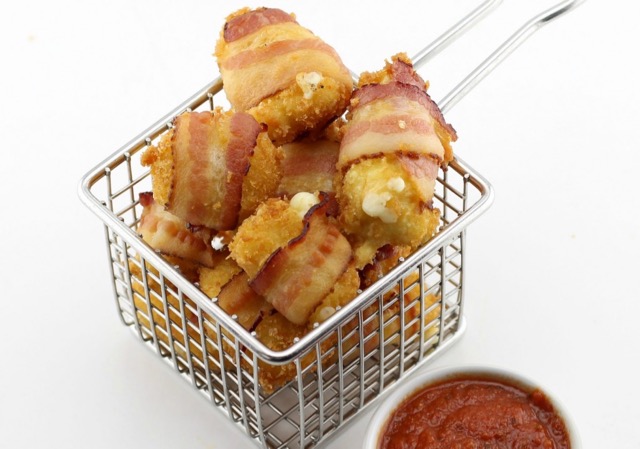 "Although everyone seemed to love the idea of the cheeseburger with the cheese curd bun, I started to realize it might have been a little too over-the-top for some people," Chipman notes. "So I dialed it back a bit. If you still want that bacon wrapped cheese curd goodness though, this recipe is the perfect alternative!"

People often ask Chipman where he comes up with all of his crazy ideas.

"Sometimes I go out drinking and I come home and I’m going through the fridge, and I open it up and see stuff and come up with ideas," Chipman says. "Or I’ll be walking through the grocery store and I’ll see something – like nacho cheese – and the ideas just come to me. And every time I make one recipe, it seems like this weird stream of consciousness thing happens, and I get like five more ideas along the way."

Chipman says he’s not out to create recipes that people would eat every day.

"You go to a fashion show and you see these crazy outfits – the chicks with like bird cages on their heads. No one wears them in real life, but they’re fun to look at," he says. "That’s kind of like what I do."

And, he says, even though the recipes he makes are outrageous, they’re generally not difficult to execute.

"I’m the worst cook out there," Chipman says. "I’ve never worked in a restaurant. I’m clumsy. I always cut myself. I always burn myself. So if I can do it, pretty much anyone can. All you need for most of the recipes is a deep fryer, a springform pan and the willingness to have fun. Oh yeah, and some fresh Wisconsin cheese curds."

In the mood for more crazy cheese recipes? Check out more at wisconsincheesetalk.com.