Five O'Clock Steakhouse discovered and restored an old mural, which shows a nude female figure with its arms around the neck of a black winged horse, that had long been rumored to be hidden behind the mirrors on the walls of restaurant's bar.

Last month, I wrote about a contest that Five O'Clock Steakhouse kicked off as part of its 70th anniversary celebrations. That contest ends Friday, April 1 and winners will be announced on April 5. 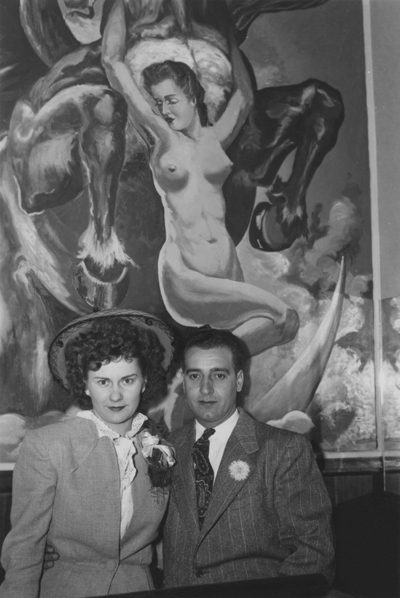 In the meantime, managing partner Stelio Kalkounos has informed us that the restoration of a mural that was recently uncovered in the restaurant is complete.

The mural, which shows a nude female figure with its arms around the neck of a black winged horse – both rising up from a cloud – had long been rumored to be hidden behind the mirrors on the walls of Five O'Clock bar.

The mural bears the signature of painter H. J. Scharwick in red in the lower right corner.

Little appears to be known about the art career of Harry Scharwick (1914-1981), although some smaller works, including an image of geese over a marsh and a portrait of Abe Lincoln have popped up online in the past.

The artwork must have been a distinctive feature of the place, originally a club before being transformed into a restaurant in 1946. When Jeanne and Ambrose Ricci held their wedding reception at the Five O'Clock Club in 1945, they posed in front of it.

The restoration work was undertaken by Mata Kartsonas of Milwaukee-based Historic Surfaces LLC.

And, yes, despite the photo at the top, the horse does have a head: 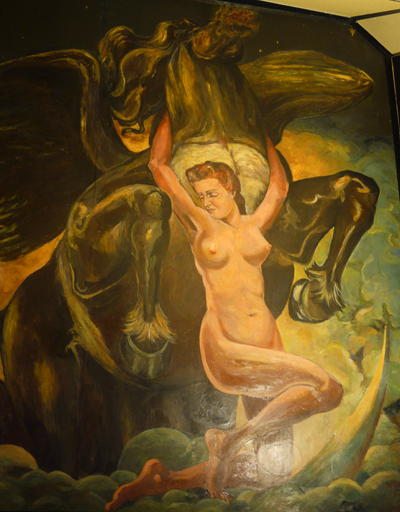