"A Christmas Carol" exudes as much magic backstage as onstage

OnMilwaukee's Molly Snyder had a one-time, walk-on role last week in The Rep's "A Christmas Carol." She left the theater without a Scrooge-y bone in her body.

A few years ago I accepted a walk-on role in the Milwaukee Ballet’s version of "The Nutcracker" in order to document the experience via an article. The cast was extremely nice to me, but as a person who never took a single ballet class, I felt like the Sugar Plum Oaf hobbling on and off the stage while surrounded by tulle and talent and grace.

When I was asked to do a "celebrity walk on" role for this year’s "A Christmas Carol" performed by the Milwaukee Repertory Theater, I thought "as long as I don’t have to dance" and "do I get to wear a petticoat?"

Luckily for the audience, I did not have to dance, and luckily for my inner 19th Century geek, I got to wear a petticoat.

Hours before curtain, I showed up for my fitting with assistant costume director Amy Horst who is currently working her 24th season. I had no idea what part I was playing – I presumed it wasn’t Scrooge or Tiny Tim – and was happy to find out I was just an extra at the end of the performance in the "church scene." 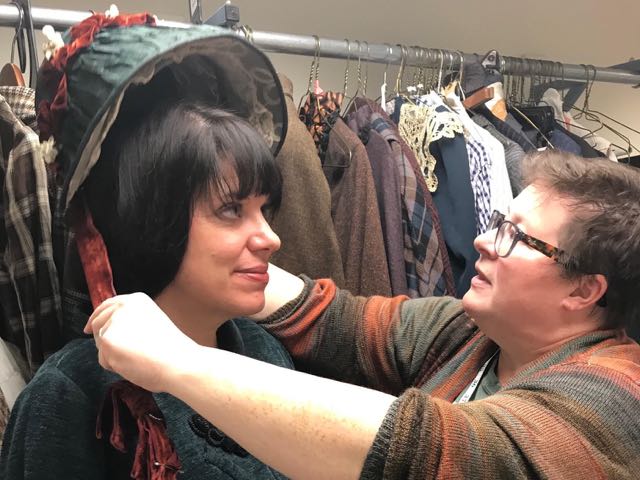 Horst set me up with my costume which included a maroon-ish floor-length skirt, a long green coat, a bonnet and the aforementioned petticoat. According to Horst, there are 20 petticoats in the show and some of them weigh five pounds or more.

Last year, The Rep introduced a new version of the beloved show after four decades of doing it pretty much the same way. Thus, the costumes changed, too. Although the new version and set is often described as darker than the previous one, the costumes are more vibrant than ever.

"There’s so much cheerfulness in these (new) costumes. To me, they look like bonbons – big fluffy skirts and bright candy colors. They look delicious," says Horst.

Some of the new costumes are wired for illumination, like this one, worn by Deborah Staples, who plays the Ghost of Christmas Past. 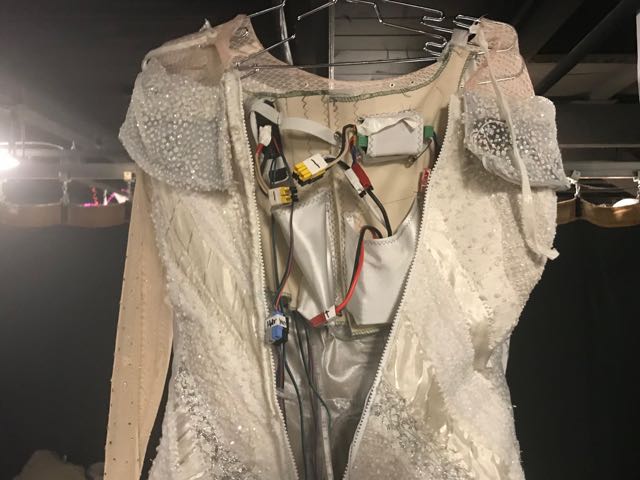 After the fitting I met with stage manager Becca Lindsey, who gave me a tour of the set and walked me through my role. 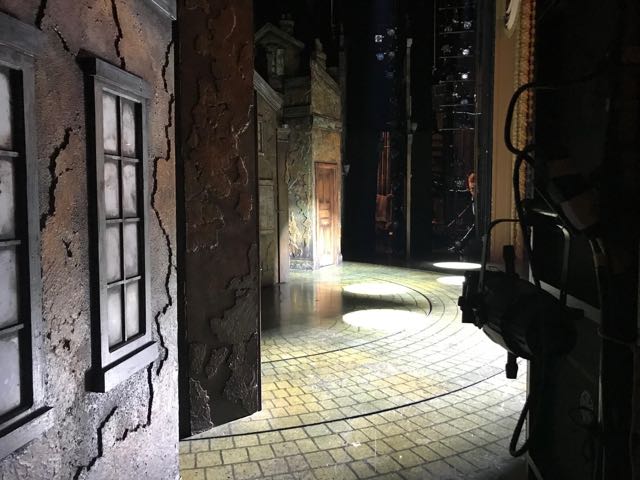 Basically, my job was to cling to another actor, Kimberly Giddens (who played numerous characters in the show) and she would lead me around the stage so I was in the right place at the right time. Lindsey also informed me I was going to sing, or pretend to sing, "Joy To the World" with that cast. At the time, I thought "no problem," but when I was actually on stage during the live performance, I realized how little of that song I knew other than the chorus. Oops. 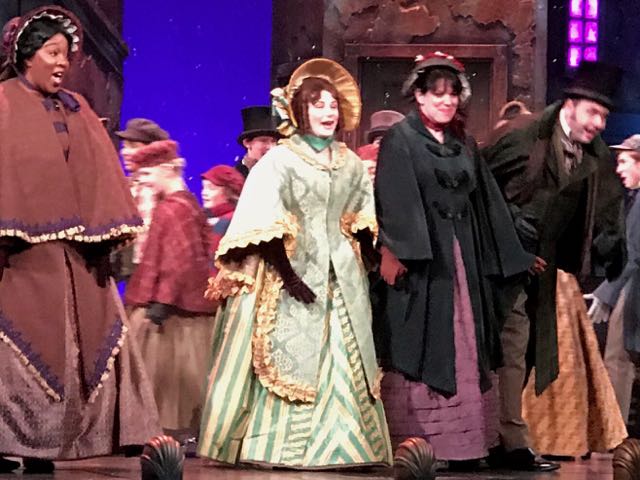 I appreciated that I was invited to watch a large chunk of the first and second act from stage right. I stood in the wings and watched the action on stage, but also enjoyed witnessing the actors waiting to go on, standing in the dark, transforming more and more with each passing second into their character. Some whispered lines to themselves, others did face and mouth exercises, some just stood quietly. 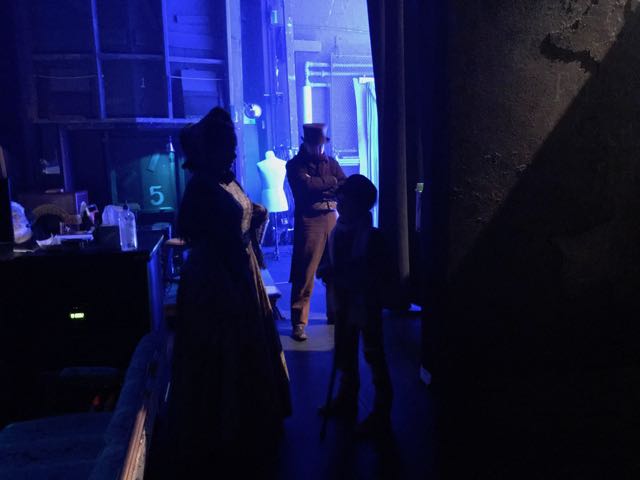 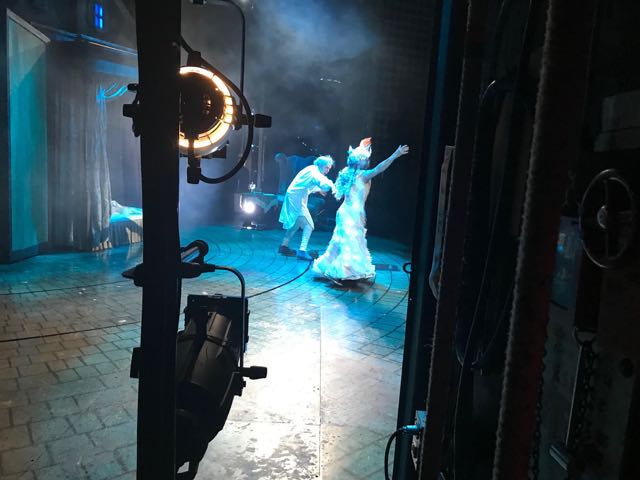 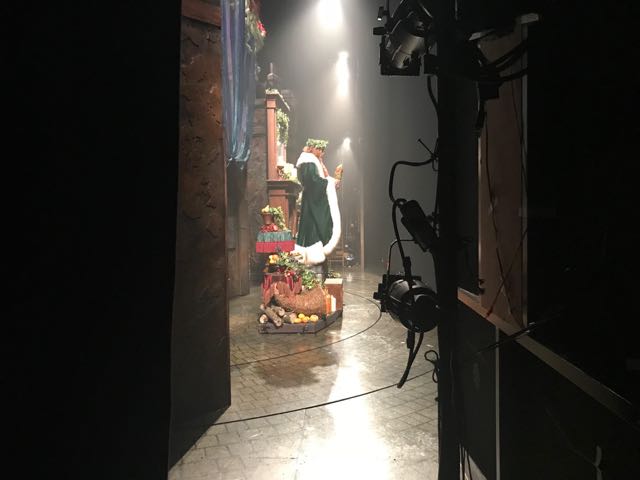 To say backstage is a well-oiled machine is not only a cliche, but an understatement. Lindsey, along with assistant stage manager Kyle Winkelmann, had everything so fine tuned that what could have been seen as chaos  – especially with 18 kids in the cast – was actually a swirl of movement, order and perfection. 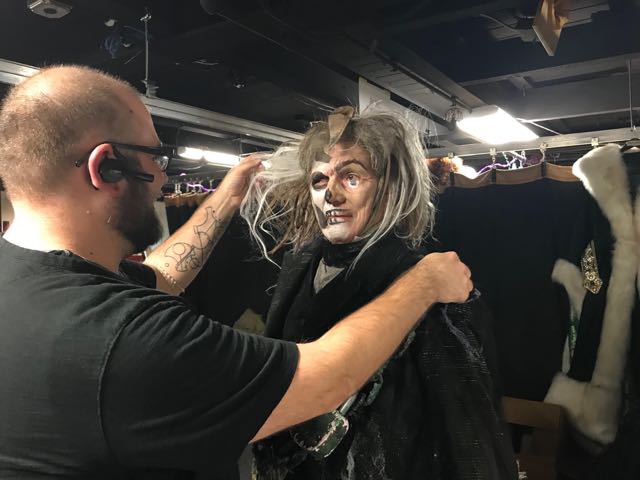 Some of my very favorite moments being in the performance didn’t take place on stage. I enjoyed waiting in the "green room" and chatting and observing the cast as they got ready for their roles and, ironically, accessed smart phones and tablets while dressed in 19th century garb. I also enjoyed watching and talking to the kids, who were really outgoing and many made a point of introducing themselves to me. Between their scenes they also played on tablets or worked on puzzles or colored with crayons. 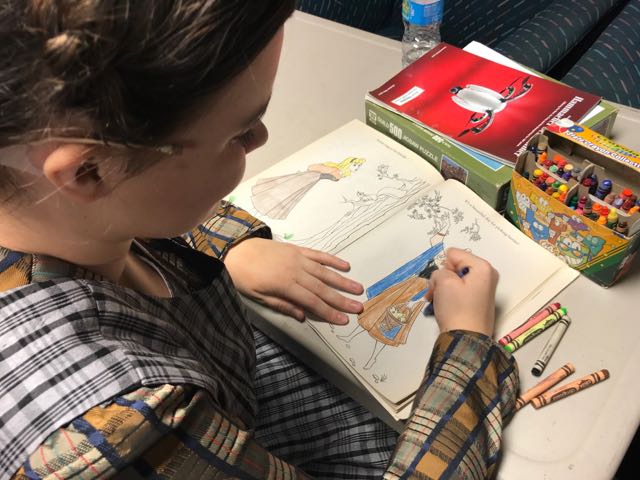 When it was my time to go on stage, I entered with other cast members on a rotating "turntable" which is a new part of the stage. One of the older children in the cast jokingly asked me if I had memorized all of my lines. I said I was fine with my many, many lines, but a bit nervous about my solo.

While on stage, I felt pretty confident – thanks to Giddens’ lead – and aside from having to mumble through the words of "Joy to the World," I felt pretty comfortable as well. I followed the lead of the other actors with facial expressions and appropriate "Merry Christmas" greetings. I think next year they’ll ask me to play Scrooge. That’s how it works, right?

My very favorite part of the experience, however, was while I was watching from the wings and thousands of "snowflakes" cascaded from above and, consequently, a few fell on me even though I was on the side of the stage. I had a moment where I felt a surge of the season and what the play is all about. I felt myself moving, like Scrooge, a little bit closer into the light. 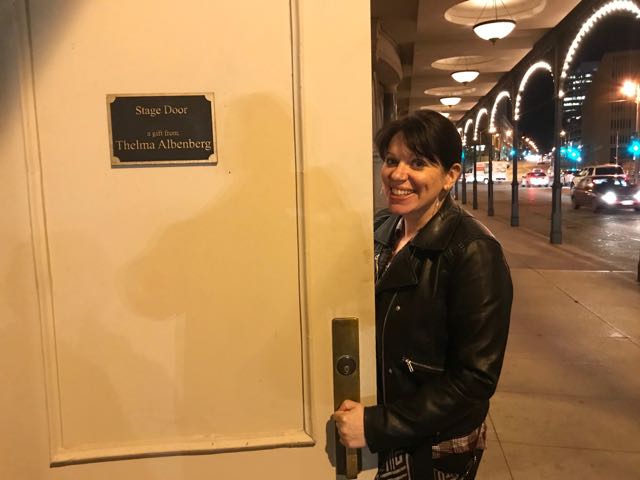 Get tickets for "A Christmas Carol" here.