Did you have a good weekend? Yes? Well, Milwaukeean and Adele fan Kathleen Dohearty's was better, as she got to join the crooning pop star on stage for a duet of "Someone Like You" last night in Chicago.

Warning: The following post may cause you a dangerous case of extreme jealousy, FOMO, thrown coffee cups and Nancy Kerrigan-esque screams of "Whhhhhhyyyyyyyyy?!" Reader discretion is advised.

Did you have a good weekend? Yes? Well, Milwaukeean and Adele fan Kathleen Dohearty's was better.

Last night, in the middle of performing the first of three sold-out concerts at the United Center in Chicago – man, that new arena here in Milwaukee can't come soon enough – Adele asked into the audience for some lucky fans to join her on stage and sing. After a couple people – a gentleman and a young girl who Dohearty recalled struggled to get many notes out through her more-than-understandable nerves – Adele picked out Dohearty, who was at the show about seven rows back from the stage, celebrating her birthday (which is today) and the weekend with friends.

"I was raising my hand, and she picked me out of the crowd – I mean, I had a few friends pointing at me like, 'Pick her! Pick her!'" she explained to OnMilwaukee. "She asked me what my name was and where I was from and then asked me to sing, so I sang the refrain of 'Someone Like You,' which is my favorite song of hers – she's got many, but it's the one I could pull off in a pinch. It was a dream come true."

Her friends in the crowd thankfully got video of Dohearty's crowd-pleasing rendition, which ends with Adele joining in on the final few verses and a nice little chat about who she's at the concert with.

Oh, and of course a selfie – a selfie that looks pretty good despite probably being taken by a tremblingly starstruck hand going through a 8.3 earthquake on the Richter scale. 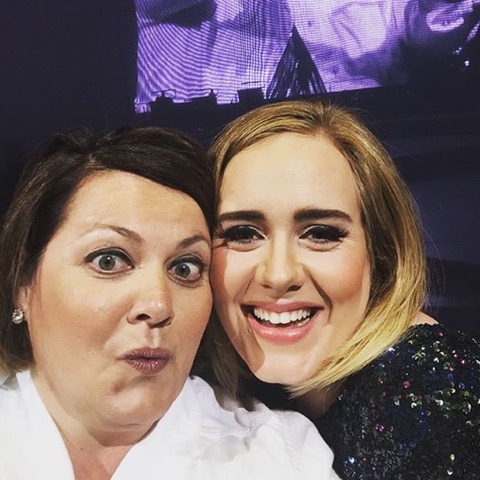 After the show, Dohearty also took to Facebook to chronicle the night and thank her friends – and thank Adele for sharing the stage and the spotlight for a bit.

"It went as good as I could hope," said Dohearty, in the understatement of the century.

So anyways, how was your weekend?