Trader Joe's is a perfectly fine grocery store. But Aldi, its estranged brother, is great. Here are six reasons why Aldi is better than Trader Joe's.

Look, I want to make America great again, too.

And while I’m all for red hats, flag-waving, having the most powerful military on Earth and the anxious dread of following the Trump-filled news cycle, sometimes we really need to borrow a page from the book of our wise, old friends in Europe. Specifically, the sternly austere ones in Germany.

Brief, fun history (yes, that’s an oxymoron, but listen): In the mid-20th century in Essen, Germany, brothers Theo and Karl Albrecht developed their family’s small local grocery store into Albrecht Diskont, which became one of Europe’s largest supermarket chains with its populist motto, "The best quality at the lowest price."

Better known by its acronym, Aldi in 1960 was split between the brothers after a dispute over whether or not to sell cigarettes. The supermarket divided into two legally independent business entities, with Theo’s Aldi Nord taking the northern part of Germany and a sizeable portion of Europe, while Karl’s Aldi Süd got southern Germany and other parts of the continent. Both companies would open stores in the United States, with Karl’s Aldi Süd beginning American operations in 1976 and dropping the Süd, and Theo’s Aldi Nord starting a few years later in 1979 as Trader Joe’s, named after founder Joe Coulombe (it’s still owned by a German family trust established by Theo Albrecht).

OK, now that you’re up to speed, let’s get to the real reason we’re all here: dispelling the myth that Trader Joe’s is an incredible, inexpensive, life-changing Wunderstore, and Aldi is a meager, low-class, Salmonella-causing warehouse.

When I first sat down to write this, I listed the cons for Trader Joe’s as "dumb," "stupid," "annoying" and "crowded." But that’s not entirely fair; after all, it’s not always crowded. But while we're on the subject, let’s just go on the record right now in saying that Trader Joe’s is a perfectly nice store with good selection that has branded itself extremely well and developed a loyal (read: cult-like) customer base. Really, Trader Joe’s is fine. It’s great, even.

That said, Aldi is great, too. Better, in fact, for myriad reasons. Here are six of them:

Trader Joe’s has good prices. Not gonna fight you on that. But Aldi has only one price: $1.99. Literally everything in the store is $1.99 (editor’s note: not true). OK, well, pretty much! Blueberries, bread, broccoli, hummus, protein granola bars, deli sliced cheese and more, all of it $1.99, the magical price that tricks your brain into getting overly excited about savings and thus buying a dozen of each product. Actually, avocados are $0.59, which is 40 cents cheaper than at Trader Joe’s.

This receipt from Thursday shows that I bought 88 things, and my total was $173.37. And that’s even accounting for the 12-speed blender I purchased impulsively for $19.99 in the home section. Take that out, and I spent an average of $1.75 an item. I had literally no food left in my apartment when I went grocery shopping, and now hopefully I won’t have to go again for a year. 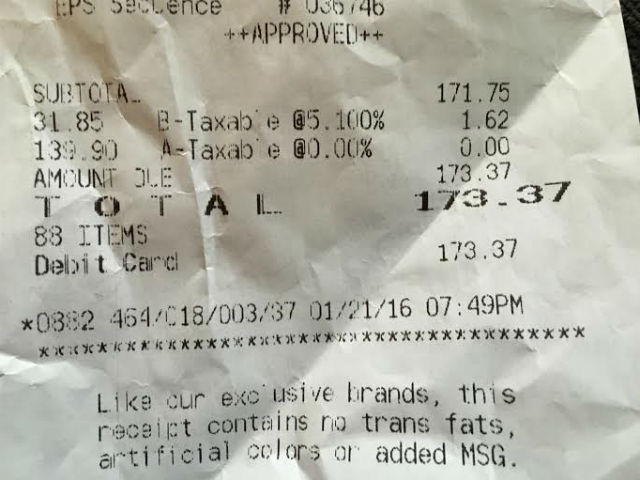 Trader Joe's has extremely competitive prices, but Aldi is cheaper. In fact, it was the cheapest grocery store in the country (more on why later), according to this 2014 Huffington Post article, which adds objective oomph to my anecdotal blathering.

I first started shopping at Aldi in college, which, like any time in life, is a good time to start shopping at Aldi (related note: It’s never too late to start!). I was one of the youngest people there, besides the dimple-cheeked dependents, but ages ranged from teenage Millennial to Gen Xer to Baby Boomer to the GI Generation. Races, religions, ethnicities, income levels, all are welcome – Aldi knows no color, creed or class distinctions.

Nor does it care what language you speak. One of my favorite Aldi memories was a two-minute conversation with an old Eastern European woman about organic versus inorganic tomatoes (at least I think that’s what it was about) that mostly involved her holding up different tomatoes, asking me something in what sounded like Polish and me nodding and saying "yes" or shaking my head "no."

An Aldi grocery store is a genuinely heterogeneous blend of backgrounds and beings. Trader Joe’s is diverse, too, in a way – you’ve got your hipsters, highfalutins, haters of processed foods, suburban moms. But if I wanted to be around that many orgiastic white people obsessing over omega-3s and micronutrients, I’d just go to Whole Foods. So bring on the nitrates, whatever nitrates are! 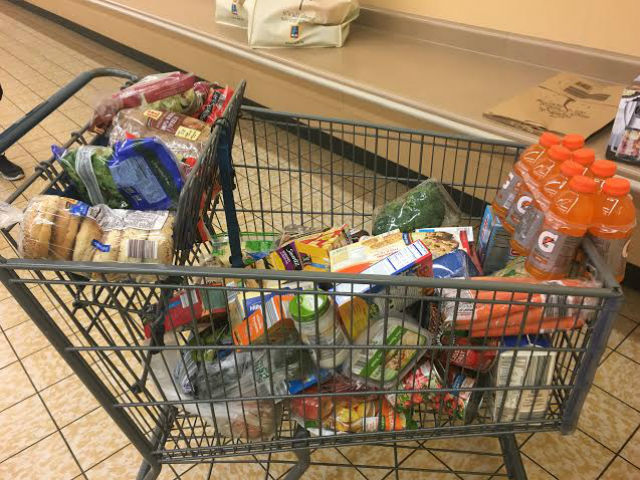 Having said that, Aldi is not a backwards, unrefined dungeon of packaged crap and GMOs. Offering USDA Organic-sealed alternatives for many of its products and featuring the popular SimplyNature brand, Aldi has tried hard to shed its junk-food reputation. It has an excellent selection of produce and sells trend-diet items like coconut oil, chia seeds and even Almond Milk ($2.29) for those lactose intolerants trying to resist Darwinism.

If you like inexpensive healthy foods, you’ll love Aldi. You may think you only need one or two sweet potatoes to make those delicious and low-calorie fries, but for just 30 cents more you can get eight! Quality and quantity? Terrific.

Trader Joe's has marketed itself well as the leader for low-priced and nutritious provisions. But, fundamentally, isn't pizza supposed to be bad for you and taste good? Should frozen pizzas ever be this green? 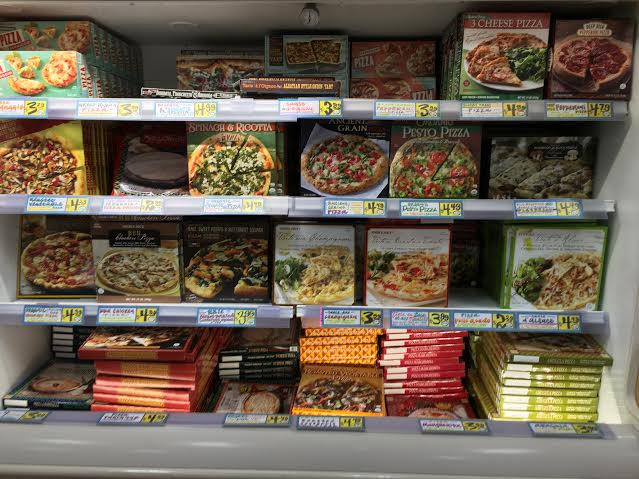 Aldi doesn’t present itself as naturalistically as Trader Joe’s. Every Aldi I’ve ever gone to – and I’ve shopped at stores in Chicago, Dallas and several in Milwaukee – welcomes you with snack foods. Immediately upon entry, a shopper is channeled down the first aisle, which contains chips, candy and cookies. Unfortunately, that’s sales reality overriding company-image interests, but it doesn’t mean you can’t find the nourishing stuff if you just keep walking. Conversely, Trader Joe’s greets its customers with fresh produce and vibrant colors, if you’re into that kind of flamboyance.

And speaking of Trader Joe’s effervescent ambience, when did grocery shopping become interactive performance theater? When I went there this week for research, four different employees with blinding smiles bounced over to ask me if I needed help finding anything. Of course I did; the place is an open-concept buzzing hive of food fanatics and bright, unreadable boxes. But I can figure it out myself, dammit! I came here to buy foodstuffs, not talk about the weather or Central American coffee growers.

There were ebullient sample-stand attendants giving interminable spiels and charming cashiers flirting with shoppers (presumably asking them out for a soy-candlelit dinner of snap peas and minced oregano). And there was '80s music playing. Constantly. 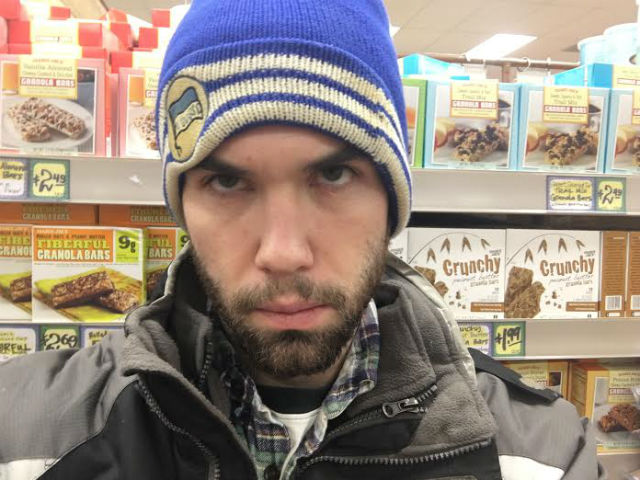 Contrast that with Aldi: Maintaining its straightforward German efficiency, at Aldi, you put a deposit down for a shopping cart (it’s only a quarter, but pro-tip: wait for someone to return theirs if you don’t have change), the shelves are basically just unassuming stacks of cardboard boxes containing products, you have to follow the aisles around to leave because it’s a closed circuit, the only employees present are stocking or cleaning or checking you out, you have to bring or buy your own bags (they’re cheap, and you can get eco-friendly ones) and then you’ve got to bag your own items.

Sound consumer unfriendly? Well, it’s the standard model across the pond, and the practices drastically reduce overhead costs, which is the primary reason the products are so cheap. Ah, the unbothered bliss of buying food, saving money and getting home quickly. 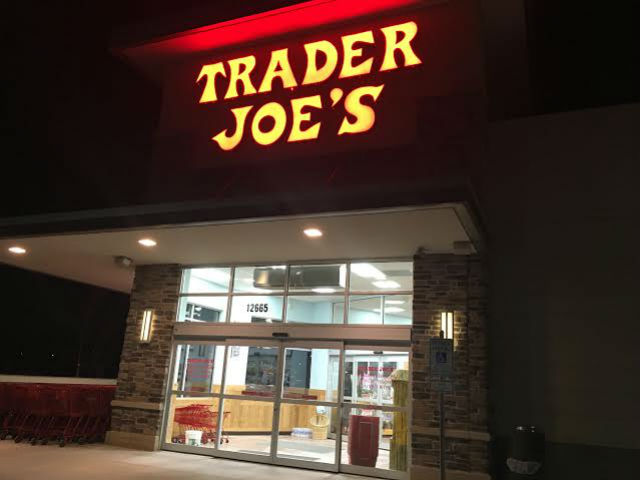 Well, for Aldi, at least, which has around 1,400 outlets in the U.S. to Trader Joe’s 400 or so. In the Milwaukee area alone, there are more than a dozen Aldis, compared to just two Trader Joe’s. And their locations are telling: Trader Joe’s is at Bayshore Mall and in Brookfield, while Aldi has multiple stores on the north side and south side, as well as suburban areas.

For both convenience and civic reasons, Aldi deserves credit. While Trader Joe’s doesn’t touch certain parts of the city, its counterpart brings the low-price, high-quality model to urban food deserts, outlying neighborhoods and the boonies all the same.

Both Aldi and Trader Joe’s are able to keep their prices low because they focus on their own off-brands rather than hawking national labels. But while Trader Joe’s – or Trader Jose’s for some of their Mexican staples, or Trader Ming’s for Chinese cuisine – puts 10 words in every product name ("fire-roasted organic mixed vegetables with balsamic butter sauce"), Aldi keeps its descriptions simple. Toaster (not Pop) Tarts, Vanilla (not Nilla) Wafers, Corntown popcorn. If you shop at Aldi, get ready for lots of Clancy’s, Millville and Savoritz.

Specifically for cereal, Aldi brand names are just unbeatable. Fruit Rounds (instead of Loops), Marshmallows & Stars (instead of Lucky Charms) and Cinnamon Crunch Squares (instead of Cinnamon Toast Crunch). Brilliant. Here’s a picture of a few of the titular breakfast champions. 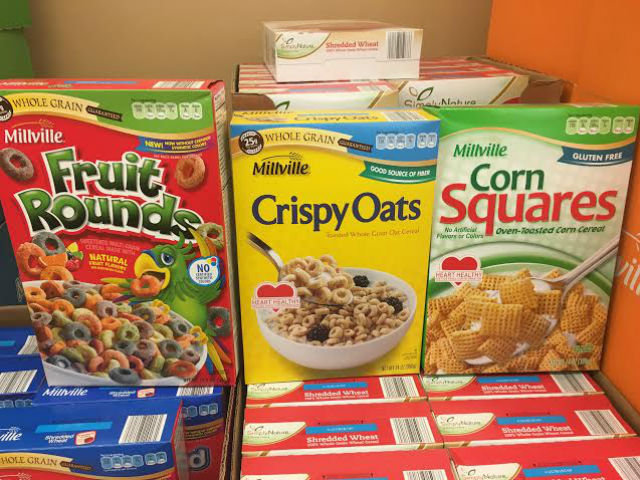 At Trader Joe’s, you will invariably be stuck waiting for five minutes to grab something because some skinny, scarf-wearing person is scrutinizing the front and then the back of an inanely titled package with the intensity of a trained bomb de-fuser. Even your master’s degree in cognitive psychology won’t help decipher what "Apocryphal Pita" is or what’s in "Green Plant Food Green Food Beverage."

So put down that absurd pack of dehydrated arugula, leave your cart full of brightly colored nonsense things in the aisle (don’t worry, one of the three-dozen employees will take care of it) say goodbye to the enthusiastically waving cashier and walk out the door of the estranged brother forever.

Fear not, new convert: There is undoubtedly an Aldi nearby. Go there and use the money you saved on organic produce to buy three boxes of delicious Toaster Tarts, instead of two.