In an age when we can get groceries delivered directly to our doorsteps, Imperfect Produce - a service which launched in Milwaukee in June - is working to help slash food waste.

A photograph taken in Jamaica that I saw years ago urged agricultural workers to treat their banana crop with care because consumers don’t want bruised produce. That image has always stuck with me for some reason and I always think of it when I buy bananas out of the bruised bin at the grocery store and use them to make smoothies.

When I chaperoned a school trip to an overnight camp, one of my favorite traditions was the weighing of the ort (food waste) after dinner so that kids could try to lessen their food waste after each meal and learn the importance of not wasting food.

According to the Food and Agriculture Organization of the United Nations, about a third of all food produced in the world is lost or wasted – that’s about $990 trillion in food – and fruits and vegetables, including tubers, are the most wasted.

In an age when we can get groceries delivered directly to our doorsteps, Imperfect Produce – which launched in Milwaukee in June and is expanding to the suburbs – is working to help slash those numbers. 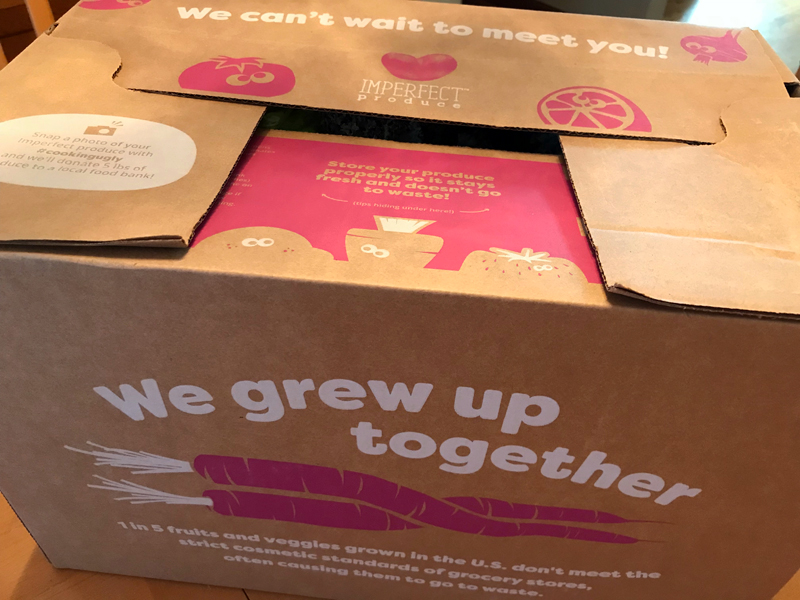 As a college student, Ben Simon founded the Food Recovery Network to help cut down on food waste on college campuses, and, later, he partnered with Ben Chesler and Aleks Strub on Imperfect Produce, which is based in San Francisco.

Having tried out a box, I can say you can make a different without even eating all that ugly. I was hard-pressed to find imperfections in the fruit and veg that arrived on my doorstep.

When you sign up, you pick your delivery schedule and check the list of what’s available that week and then you customize your box. Or, you can let Imperfect Produce surprise you.

The weekly inventory lists where the produce comes from and what’s "wrong" with it. On the list I tried out, most of the items weren’t damaged at all but were deemed surplus, so I got a box full of perfectly fine organic produce delivered to my doorstep for less than it would’ve cost at the grocery store.

And having a ton of fruit and veg in the house encouraged us to cook more meals so that we wouldn’t waste the "rescued" food.

The only challenge for us is that with a constant schedule of evening soccer games and other activities, we often shop small, picking up the items we need as we need them to avoid waste.

But, if you know you’re going to consistently use all the fresh fruit and vegetables (along with some other items, like the chocolate mint balls I swapped in to my delivery – the package was damaged but the goodies were unharmed) in your box before they spoil, Imperfect Produce is a perfect way to shop for produce.