Kavon Jones - aka "KJ Prodigy - is a poet, performance artist and activist who continues to wow audiences with his lengthy, passionate, memorized poems about people including Frida Kahlo, Jimi Hendrix and more. 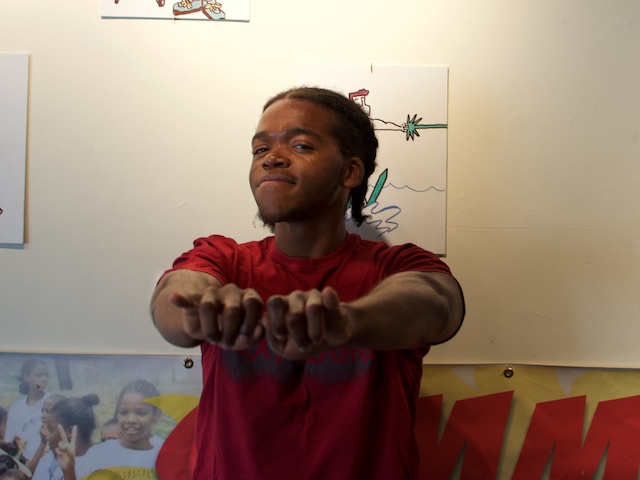 Kavon Jones – aka "KJ Prodigy" – is a poet, performance artist and activist who continues to wow audiences with his lengthy, passionate, memorized poems about people, including Frida Kahlo and Jimi Hendrix. Through his poetry, Jones shares his experiences growing up in Milwaukee’s Harambee neighborhood and details with honesty and humor what it’s like to be Black in Milwaukee, in America, in the world.

Jones writes and reads voraciously, teaches poetry workshops to children and regularly hosts open mic nights and events around the city. At only 20 years old, he has already shown he has heart, talent and drive and is definitely a person to keep an eye on in the future.

OnMilwaukee.com / Too Much Metal: How long have you been doing your thing?

Kavon Jones: I have been writing poetry ever since I was 13 years and in 7th grade. My mentors Kwabena Nixon and Muhibb Dyer came up to Dr. King Elementary and did a poetry performance and wowed us out of our seats. They have been my catalysts for writing passionately into this scribe culture ever since. I also give thanks to Dasha Kelly, Mario Willis, Darlin Nikki Janzen and especially Paul Moga for being dear mentors.

OMC / TMM: How would you describe your work?

KJ: Music and visual plays a major roll in my art media. I like to portray images of Jimi Hendrix painted with his guitar through words. I've studied the lives of Frida Kahlo and Vincent van Gogh and cultivated persona poems through their voices. I consider myself to be an innovative connoisseur by mixing other art medias with mine to create something new and different. My goal is when I'm at an open mic I don't want to sound like the person sitting next to me. I don't want to be status quo. I challenge myself to take it to the next level.

OMC / TMM: What time of year / season is your favorite in Milwaukee?

KJ: My favorite time of year is definitely autumn going into winter. My imagination's greasy gears and locomotives are fully spinning between late September to late February. Old Man Winter has a skull-faced spray can utilizing my right brain as a canvas. I am psychologically miniaturized into my 7-year-old self and wander-lusted curiosity takes over me.

The only way I can explain what autumn and winter do to me is through poetry. I just want to sit at home all day and watch every childhood horror movie: Stephen King's "It" and "The Mist," the "Saw" and "Scream" movie series, "Goosebumps" and the list goes on and on. I don't sit at home all day, of course. I have to go outside and study the skyline, sit down by the Milwaukee River in Riverside Park and go biking down to the mystified Lake Michigan.
Winter snowfall makes the most dilapidated purlieus of Milwaukee look like a Van Gogh masterpiece manifested.

KJ: In Harambee – the 53206 zip code. This neighborhood is full of voluptuous-minded individuals even though their destitute living conditions don't say so.

KJ: My favorite smell is Oakland Gyro's on Oakland Avenue. It's a childhood staple. Every Friday growing up, family and I would get gyro plates. The warm lamb strips made the fries underneath all soggy, but I loved it. My vulnerable nostrils would vacuum up the resisting steam. I drooled!

KJ: My hopes for Milwaukee dwindled in numbers for the better. I realize Cream City has a lot of problems but the city has so much more. I see tons of motivated young artists such as my homies and homettes Deniesha aka 'Fivy', Yessica J. and Jay Lopez, aka ZombieGawd, following their passions of hip hop and visual art around the city.

My hope for the city is we stop becoming perpetually shrouded by news media nincompoopery, and let more black and brown unity mold our TV and computer screens into hearts.

KJ: I fell in love with Milwaukee by simply being from this Midwest whistle stop. I have a poem entitled "Paris of the Midwest" referring to Milwaukee. I performed it in Dead Man's Carnival and the audience got a good laugh when I said its title. I laughed along. I prefer to compare Milwaukee to Paris because of its plastic flamboyant lights at night.

I remember leaving Discovery World one night after Stillwater Collective's High School Slam League Kick-Off and saw all the Downtown edifices lit up. I heard car honks, saw bikers and beauty. I had never seen Milwaukee in such a way. All the buildings from where I stood outside Discovery World were at grasp of my hungry eyes.

Homegrown organizations such as STITCH Milwaukee have really helped me fall in love with Milwaukee. STITCH is a community open mic started by my friends, Jeanette, Alida and Tony to bring black and brown unity. They rotate venues every summer on different sides of the city – specifically the North and South Side – and collect people with unique cultural backgrounds. We come together and spit rhymes, poetry and music fusion.

KJ: I write poetry because with my right brain activated nearly 24 hours a day I need to exult creativity out my body some type of way. Poetry oozes out my ears, comes out as ectoplasm through my mouth and bleeds through my fingernails. It's a supernatural excretion of psychedelia Jimi Hendrix' music taught me.

KJ: I would like to high five my friend Emiliano Corbett-Soza. We have not had time recently to talk like dear companions, but I love him like a brother. He is currently a Public Ally at Urban Underground and has been doing great work. We kind of became best friends in the past year and it's been great. We were supposed to do a poetry and acoustic fusion back in the fall but never happened. Hopefully we can get back to it!

KJ: I love to wake up some mornings blasting Jimi Hendrix from my headphones playing air guitar in my red boxer shorts.