The altercation at the Alternate Site

By mid-1972, the Alternate Site had settled into peaceful co-existence with its neighbors, the police and ordinary citizens enjoying warm summer days along Milwaukee's lakefront. That is, until July 2, 1972, when an altercation broke out.

By mid-1972, the Alternate Site – created the year before by county ordinance in response to youth disturbances at Water Tower Park two years earlier – had settled into peaceful co-existence with its neighbors, the police and ordinary citizens enjoying warm summer days along Milwaukee’s lakefront.

Nestled in a natural alcove across from McKinley Beach, the site was really an ideal location, with the bluff behind and the lake across absorbing music which had previously rattled residents of homes on the East Side, as well as patients at St. Mary’s Hospital.

Everyone seemed quite pleased as Gary Ballsieper’s Free City Music sponsored free concerts almost every Sunday. And as members of the counterculture were aging, it was taking on a family-like setting, with married couples, or otherwise, bringing their young children along. 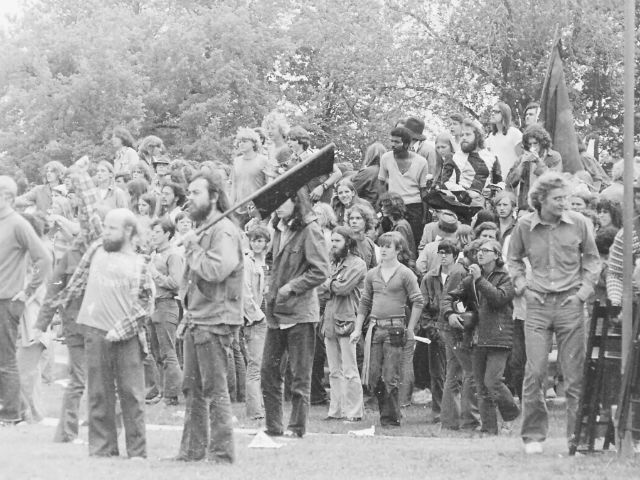 Everyone, of course, except the notorious Youth International Party (YIP), who thrived on instigating confrontations between young people and the police at every opportunity – opportunities they, of course, frequently created themselves.

So in late June, the Yippies decided to provoke the police by advertising a "smoke-out," wherein people would light up joints out in the open to test the Police Department’s mettle.  Yippies had sponsored a similar event in Madison a few months earlier but, much to their chagrin, drew virtually no response from authorities.

But this was Milwaukee, where such challenges to the law weren’t taken lightly. The event was billed to take place at Water Tower Park on the afternoon of Sunday, July 2 – by no small coincidence the same time a concert was to take place down the hill at the Alternate Site.

(For the record, these YIPs were not the same people who had previously stirred up trouble at Water Tower Park and elsewhere. Those original Yippies disbanded under threat of prosecution for inciting riots by the D.A. and the Feds. A group previously known as The Survival Center picked up the name and carried on the banner.) 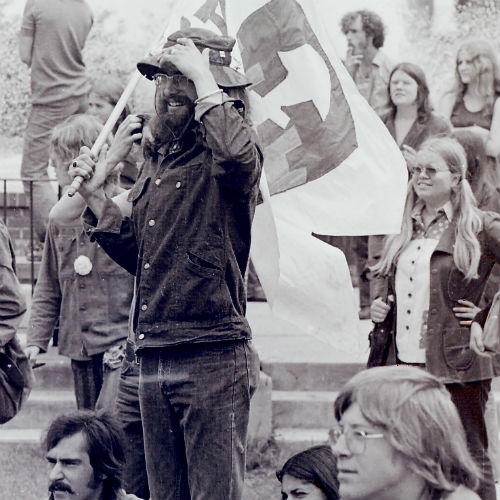 Not a lot of people showed up at the "new" Yippies event, but there were plenty of plainclothes police there ready to greet them. The few who lit up were quickly set upon and hauled away. But it was no secret that the Yippies’ real intention was to draw the Alternate Site into a confrontation, and they soon trooped down the hill, interspersing themselves and toking up among the crowd.

The narcs followed, wading onto the scene, arresting the offenders and hauling them away. The concert-goers at first didn’t seem to pay much attention, but eventually shoving-matches broke out with the undercover cops, occasionally resulting in the intended prisoner breaking free. 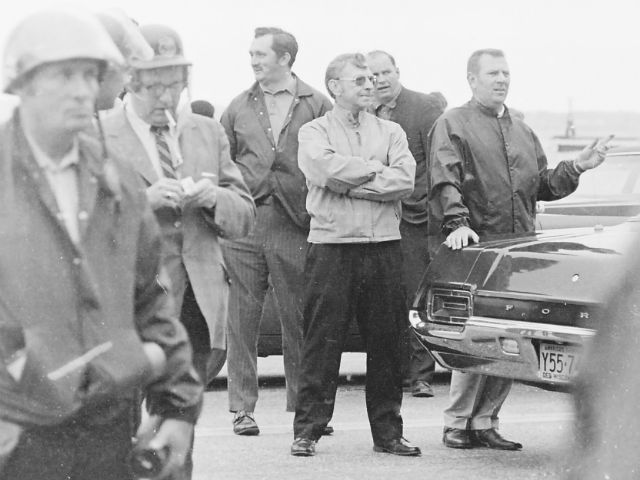 The police called in reinforcements, and soon uniformed officers were streaming in to be met by a barrage of bottles and rocks, forcing them to take cover behind police vehicles (it can be assumed the missiles were supplied by the Yippies, since bottled goods were prohibited at the Site, and the grassy area was smooth and free of rocks and other debris).

More police arrived, now in riot gear, making seemingly random arrests of anyone who complained or challenged them in any way, including one young lady who had chosen to show up in a clown outfit. The narcs retreated to the sidewalk and simply stood and watched the goings-on. 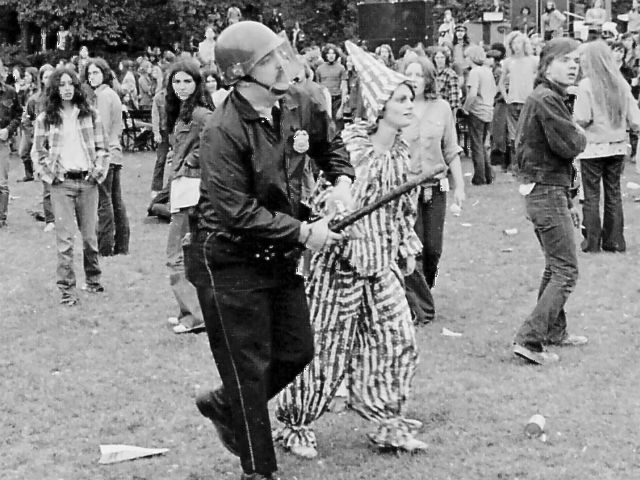 When the disturbance broke out, many people left, and the band initially stopped playing. But Ballsieper, with help from Kaleidoscope’s Dennis Gall, told them to resume, which they did. It was a brilliant move. The crowd re-focused on the music with the majority of those left sitting back down to listen. The timing was perfect. 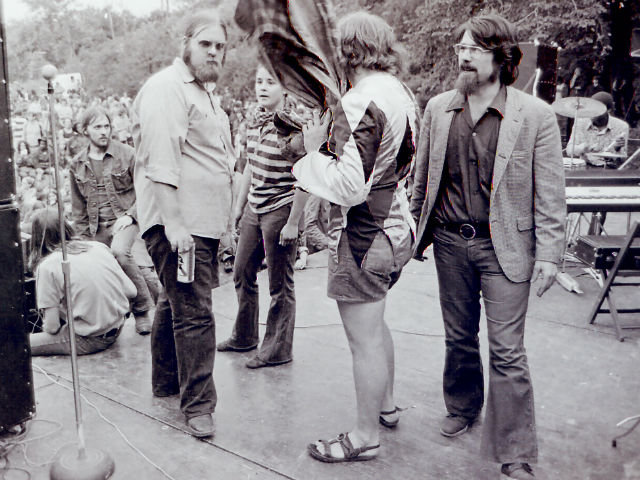 The scene then became somewhat surreal, with the stage rocking and the police in their riot gear now largely ignored, standing on the fringes left with little to do. It didn’t appear they had much leadership. For a moment, many heads – including those with helmets – turned to watch a dog refreshing itself from a drinking fountain, causing chuckles all around. Another break in the tension. 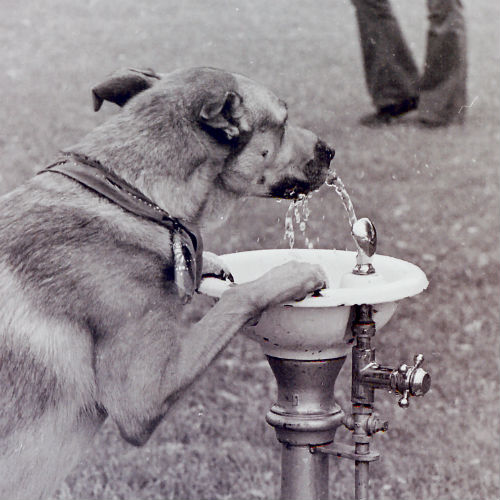 Finally, an officer used a bullhorn to tell people to disperse, but he couldn’t be heard above the amps – and anyway, the order was meaningless since the concert itself was completely legal. He didn’t bother to try to enforce the directive. 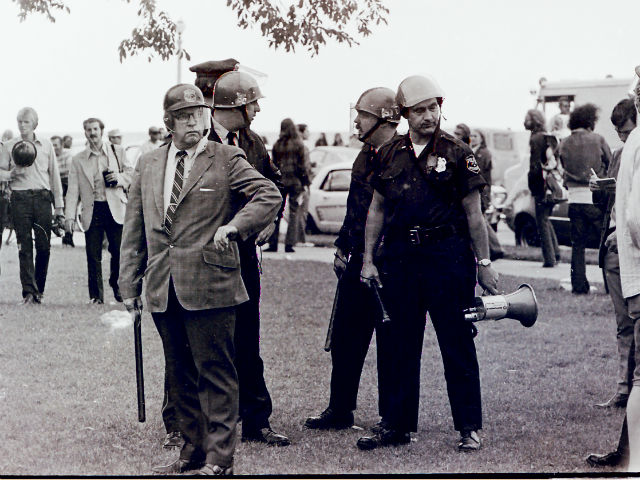 It’s said that Ballsieper finally located a sergeant who seemed to be in charge and negotiated a type of truce. The remaining police would withdraw, he would personally get rid of any leftover Yippies and the concert would continue until its designated end time. It seemed like a proper face-saving to everyone – except, of course, for the YIP – and less than an hour after the trouble began, everything was back to normal.

Entertainment had conquered confrontation. And anyway, even the Yippies – new or old – wouldn’t mess with Gary Ballsieper. 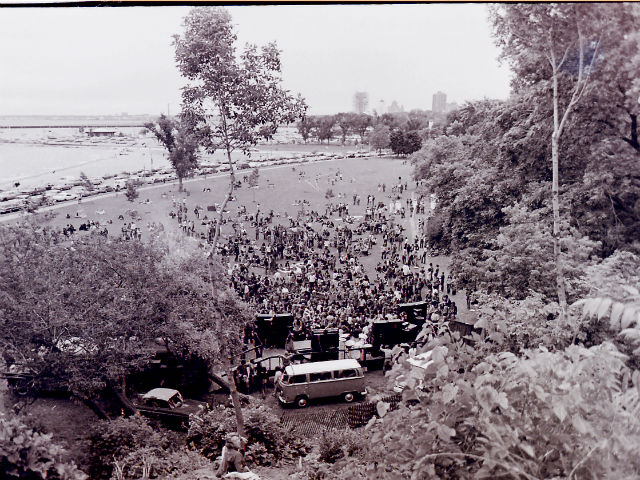 The Alternate Site continued to operate without incident for the rest of its history – though over the next two years, concern about soil erosion led Milwaukee County and Free City to try to move the concerts periodically back to their previous, "unofficial" location alongside the pumping station to the north. A violent, police-initiated raid there in 1974 put a significant damper on attendance at future lakefront concerts.

While there is no record of when the last performance was held, suffice it to say that by the mid-70s, interest in the free concerts had begun to run its course, and the events pretty much sputtered to an end. The public’s desire for entertainment was rapidly being filled by the growing sophistication of Summerfest and the emergence of numerous other music festivals.

And, of course, there were those growing children who probably didn’t want to come along anymore.

Nonetheless, as far as anyone knows, the county ordinance by which the Site was created still stands, just in case you want to put on your own concert some Sunday afternoon. Don’t forget your clown suit.