Anette Righi DeFendi, who started out with a career in journalism, traveled a long road to becoming a chocolatier. But, a love for baking and an encouraging sister eventually led her down the path to chocolate.

From a very early age, Anette Righi DeFendi, Chocolatier at The American Club Resort,  had a passion for baking.

"In church on Sundays, I’d keep myself occupied by pretending the hymnal was a cookbook," she recalls. "And in middle school, I’d always look forward to coming home and making dinner."

DeFendi says she always had a sense that she might want to go to culinary school; but, she didn’t pay attention to what her gut was telling her. Instead, she earned her degree in journalism and took jobs working in marketing for companies including Coldwell Banker and Harley-Davidson.

"It was a great time in my life," she notes. "I got to travel, I learned to ride a motorcycle. And then the economy crashed. Things grew difficult and I started to feel stuck."

It was a conversation with her sister that finally prompted her to dip her toes into culinary waters; she signed up for a cake decorating class at the French Pastry School in Chicago.

"From the moment I stepped my foot in the door, I was hooked," she says. "So, I enrolled full-time. As I moved through the classes, I found that I enjoyed baking cakes more than decorating them, and that I wasn’t interested in bread. But, the moment I entered into the phase where we studied chocolate, everything began to make sense. From the beginning I really understood it – oddly – because great chocolate really wasn’t part of my background growing up."

DeFendi learned from the best. Chefs Jacque Pfeiffer and Josh Johnson (now pastry chef at The American Club) became her mentors. And she immersed herself in learning all she could about the ins and outs of working with chocolate.

When she graduated from culinary school in 2010, her first job was baking and decorating cakes at Miss Julia’s Bakehouse in Brookfield. But, within a year, she moved on to work for Kohler’s head chocolatier Peter Clemens. By 2013, when Clemens moved on, she was promoted to chocolatier, a job she refers to as her "dream job."

"It starts with an idea. I’ll have recipes and notes and a concept that I know will work. But, I’ll sit and think about it for sometimes quite a long time – what form do I want it to take? What kind of chocolate should it use? And then it’s about choosing the colors and the molds. And that part I love; it’s so fun.

"My team and I will go through multiple tastings, which can take months. Everyone on the team will provide feedback, and I take everything into consideration in making modifications. And once I’m happy with it – which can take months – I’ll present it  to Mr. Kohler. And if he approves, then we can move forward.

"Every month we have an executive meeting with a group, including Mr. Kohler. And part of the meeting is tastings. It’s the place where I can present new ideas and recipes. Sometimes they’re approved right away; other times, Kohler will provide feedback and have me take it back to make adjustments." 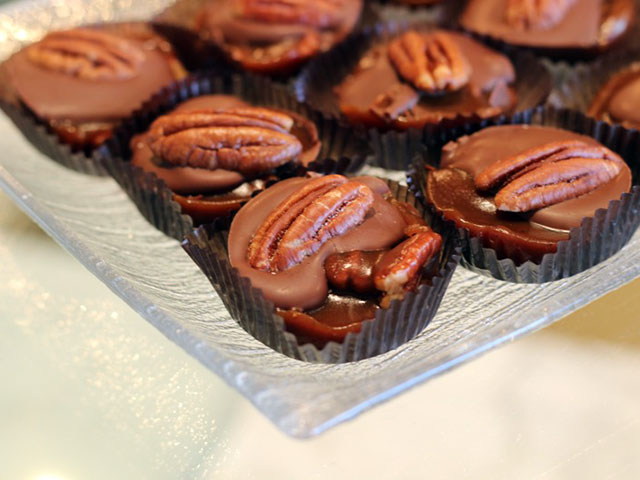 "When you really get to know him, he’s a very generous man. And he’s fascinating. He switches from analytical to creative and back again like it’s nothing at all. He can be really fun to work with; he tells jokes, and he has a great laugh. And he’s so proud of the resort. And the chocolate business and the Craverie.  He’s all about family, and he understands that people have families and that family is important."

"I have a sugar free dark chocolate with dried blueberries in the works. And it’s really delicious; if you didn’t know it was sugar free, you probably wouldn’t be able to tell.  It’s been challenging; the sugar free chocolate doesn’t behave in the way regular chocolate does, so there’s been a learning curve. And my team and I have really been able to put our heads together to make it work.

"We also have something called "the divine chunks" – a crunchy peanut butter molded chocolate – that’s currently in the process of going through the channels with our communications team." 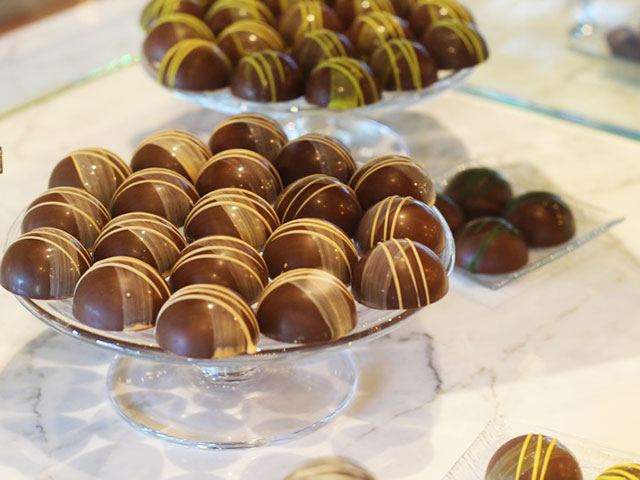 Highlights of the chocolate life

"The team. We have such a great group of people here – from packaging to leadership to the resort team.  Gerald Allison, the manager of Woodlake Market, will go to shows and bring back ideas for me. Josh Johnson, pastry chef, is also great for the team. We’re all in different places, but we work together, share ideas.

"And I love my team in the kitchen. I love mentoring and coaching. And I love seeing peoples’ skills develop and watching them go on to do bigger and better things. I love giving them freedom to create, and then reeling them in when they go too far. I love seeing them thrive.

"And then – it’s chocolate. I love the process. I love working with the polycarbonate molds and creating things. And… I just can’t imagine being anywhere else. I love it."

"I never enough time to do what I want to do, and rushing to get a job done, rather than spending a few extra minutes to make sure everything is perfect.  Especially during this time of the year, we’re so busy.

"I love having a pristine kitchen, and it really just makes people feel good. They feel better and work better. And sometimes when we’re busy, there’s just not the ten seconds to make everything the way I’d like." 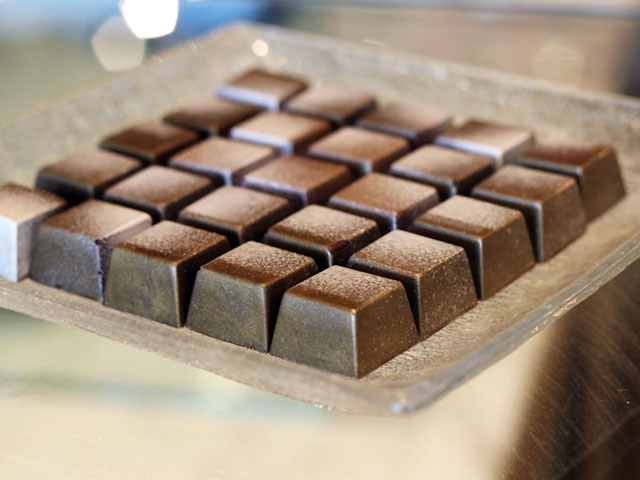 "It’s hard to pick a favorite. I call them all my chocolate babies, and I really do care about everything that I make. But, I do like certain flavor profiles. I love caramel. I love making it. I love eating it. And it’s my favorite thing to eat when I’m stressed.

"But, I also love fudge. And it’s funny because we don’t even make it. And it’s so Wisconsin – kind of mom and pop-y… like you go up north and you buy fudge. There’s this guy I know who works in the area, and he makes his own marshmallow cream that he makes fudge with. And he brings me some and tells me that I have to share it. But, I don’t. There’s just something about the texture of it. It’s so good. Kind of like frosting."

DeFendi’s creations are available at select stores or from kohlerchocolates.com.

Give them chocolate! Delicious finds from 8 local chocolate shops