The story behind the oldest Milwaukee concert listed on Setlist.fm

While doing some research on setlist.fm, which lists concert performances and their set lists, I decided - on a whim - to see the earliest show listed for Milwaukee. I was not expecting the result to be a pair of 1851 performances by acclaimed English operatic soprano Anna Bishop at Gardiner's Hall on Wisconsin and Water.

While doing some research on setlist.fm, which lists concert performances and their set lists, I decided – on a whim – to see the earliest show listed for Milwaukee.

I was not expecting the result to be a pair of 1851 performances by acclaimed English operatic soprano Anna Bishop at Gardiner’s Hall on Wisconsin and Water.

Noticing that the site didn’t have set lists for either performance, I let the curiosity get the best of me.

Bishop was born Ann Rivere in 1810 in London to a singing master. After studying piano, Rivere attended the Royal Academy of Music and made her performing debut in her hometown at the age of 21.

A month later, she married Henry Bishop, who had been her teacher at the Academy.

Anna Bishop gained much experience, singing with the Royal Philharmonic Society, appearing in the Italian Opera House in London, performing in operas in Italy and touring Great Britain with French harpist Nicolas-Charles Bochsa, who became her touring agent. She also was part of the chorus at the coronation of Queen Victoria. 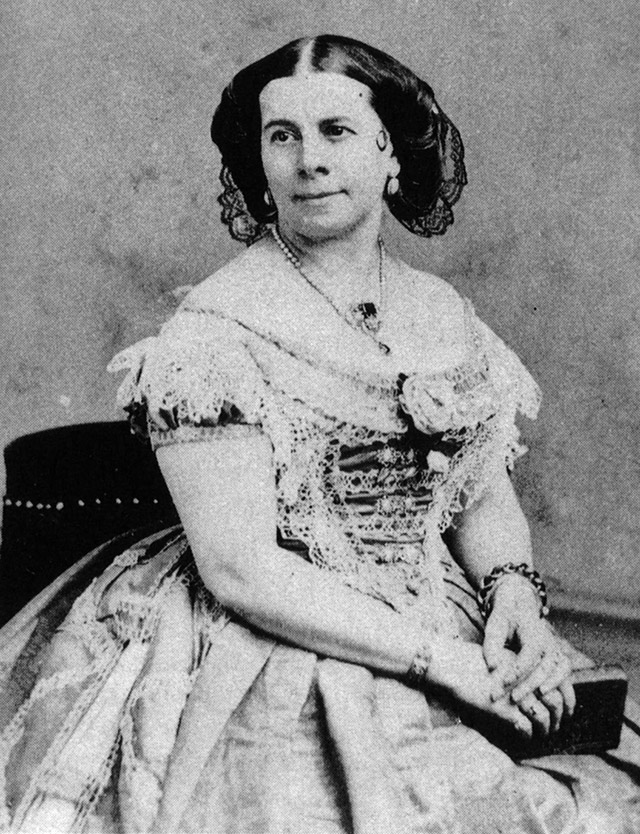 Anna Bishop, circa 1860, in a portrait by Charles Deforest Fredericks.

Later, she would tour the world, including Australia and South America.

In the early 1850s, she came to America and performed alongside singing star Jenny Lind. Her 1851 tour took her all over the northeast – Buffalo, Rochester, Albany – and the then-West, including Chicago and Milwaukee.

Here, she was slated to play at Gardiner’s Hall, a banquet facility that hosted balls and society meetings as well as mass political gatherings and on at least one occasion a murder trial. According to James Smith Buck’s "Pioneer History of Milwaukee," the hall could seat upwards of 800.

It was located in the Martin Block, on the southwest corner of Wisconsin Avenue and Water Street, built by real estate operator James B. Martin, who would, a few years later, build the Iron Block across Water Street. 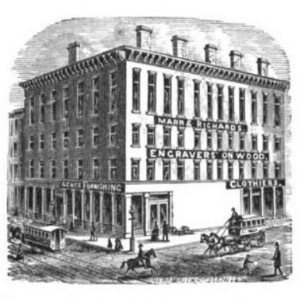 "Erected in 1849, with a front of 60 feet on East Water Street and a depth of 80," noted Buck in his landmark book. "At the time of its erection, was the finest building in the city. It was a vastly greater improvement upon its predecessor than its successor was upon it; neither was it expected that its superior would be found in the city for the next 20 years. It has had a wonderful history. It was worn out, however, and pulled down in 1881 and the present magnificent structure was erected upon its site."

In mid-July 1851, the Milwaukee Sentinel first announced that Bishop was headed to Cream City.

"We have a line from the business agent of this distinguished vocalist, now on a professional tour through the Northern and Western States, announcing her purpose of visiting Milwaukee and giving a concert here early in August," the paper reported on July 18.

"She will be accompanied by several artists of superior merit, and is herself one of the most brilliant and successful vocalists now in our country. We observe that her two concerts at Albany, given on alternate evenings, Jenny Lind’s were crowded to excess."

The Sentinel kept readers apprised of Bishop’s whereabouts and posted advertisements and reminders for the following month.

On July 31, it amended the dates of the performances to Aug. 21 and 24, saying, "our musical readers may confidently anticipate a rare treat."

On Aug. 8, the Sentinel printed a review of Bishop’s Buffalo appearance.

A week later, it again updated the date of the performance(s). 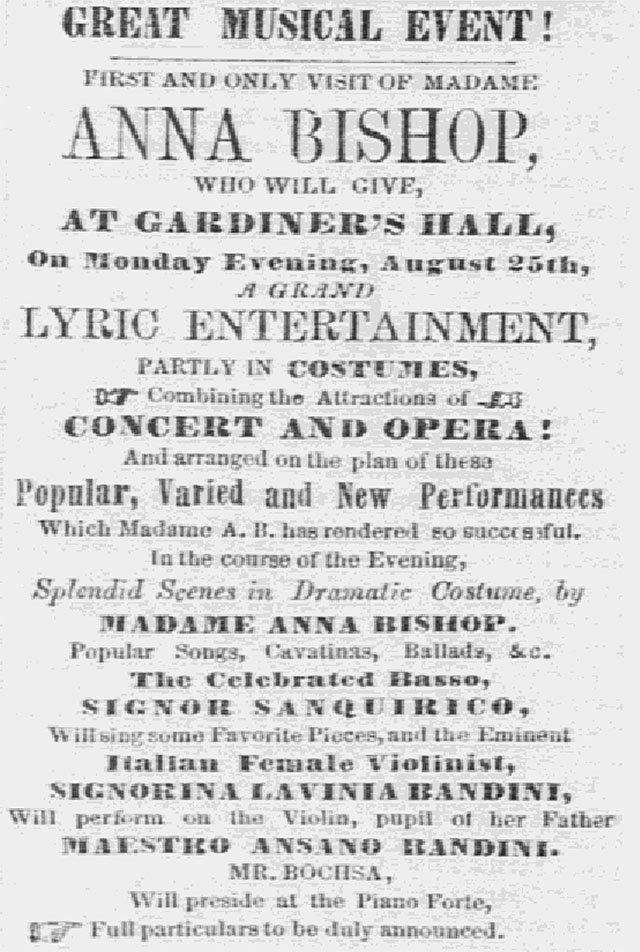 "We learn from Mr. Bochsa, manager of Madame Bishop’s concerts, that this celebrated vocalist will appear in this city on Monday evening 25th, at Gardiner’s Hall," it wrote. "She is accompanied by the famous basso, Signor (Antonio) Sanquirico, and by Signorina Lavinia Bandini, whose praises as a violinist have been celebrated through Europe and in this country wherever she has appeared. Her father, Ansano Bandini, accompanies her.

"Madame Bishop’s concerts have given universal satisfaction where she has appeared, and her tour thus far this summer has been a remarkably successful one. We do not doubt that she will meet with an enthusiastic reception from our music-loving community. The party appears in Chicago next week."

On the 18th a biography of Bishop was printed, alongside advertisements for the performance, and beginning on Aug. 21, the expected repertoire was printed a number of times. These appear to confirm that there was just one performance, on Aug. 25, 1851 (following three nights of performances, Aug. 21-23, by Kunkel’s Nightingale Ethiopian Opera Troupe, a Baltimore minstrel company).

Part one was to include a mix of, "Popular Songs, Scotch Ballads, etc." and, indeed, one of the ballads was Robert Burns’ "John Anderson My Joe."

Doors opened at 7 and the performance began at 8.

Interestingly, despite all the advance media attention, there doesn’t appear to have been a review of the performance in the Sentinel. However, there was that review from the Buffalo Courier that the Milwaukee newspaper had printed in advance of the Cream City concert and based on that, the "set list" was the same (see bottom).

"Madame Anna Bishop’s Concert – This musical festival, so long announced, came off last night before a full and fashionable audience, who left the Concert Room delighted with the charmer. It was a most appreciating audience, and the compliment of applause and encores lavishly rendered, was therefore greater. In the first part the 'Casta Diva' was exquisitely given and good feeling only prevent the enforcing of an encore. But when Anna Bishop’s heart-felt notes were heard in 'Home, Sweet Home,' human nature could stand it no longer, every verse was loudly cheered, and an encore universally demanded before she could leave the stage. 'John Anderson' and 'Coming through the Rye,' were given finely, and the encore produced the ever favorite Madame Bishop’s own 'Banks of Guadalquiver.' The singing lesson, rendered very finely by Anna Bishop and Sanquirico concluded the glorious first part. In the second part the lyric opera was given and here Madame Bishop was seen to great advantage in a portion of those grand performances which have made her fame all over Europe. The 'Roberto Devereaux,' in which Anna Bishop appears as Elizabeth, in a most costly and right regal robe, was a triumph of art – but the Lucia was in our opinion the masterpiece. We have never seen the passions more truthfully and forcibly delineated. Little Lavinia Bandini is truly a wonder. She handle the bow like a master. She was encored in both her pieces, very loudly in the 'Carnival of Venice.' She is very pretty as well as talented. The (basso) buffo Sanquirico was fully equal to his great reputation. Of Bochsa’s accompaniment we need say nothing, 'none but himself can be his parallel'."

After Milwaukee, Bishop continued touring the world. In 1856, she headed off to Australia, but after playing just one concert, Bochsa died unexpectedly. The year before, her husband, from whom she’d become estranged, had died.

In 1859, she gave a royal command performance for Queen Victoria in London and then went back out on the road. In 1866, while headed to China from San Francisco, her ship wrecked on Wake Island, where she was stranded for nearly a month before the castaways took to a pair of rowboats and headed toward Guam.

Bishop’s boat made it, but the other did not. Still she toured, playing everywhere from the Philluipines to Singapore to New Zealand to South Africa. She was also the first to perform a concert in 1873, at the Mormon Tabernacle in Salt Lake City. She died in 1884.

At some point, for some unknown reason, someone posted the date of her Milwaukee performance on Setlist.fm, one of just three 19th century performances listed for the city.