Monday evening, Ald. Tony Zielinski held a community meeting in order to address the recent rumors and speculation concerning the potential sale of At Random - in addition to five other buildings held by the same owner - and to take community input concerning the neighborhood bar.

Monday evening, Ald. Tony Zielinski held a community meeting in order to address the recent rumors and speculation concerning the potential sale of At Random – in addition to five other buildings held by the same owner – and to take community input concerning the neighborhood bar.

The meeting, held at the South Shore Park Pavillon, located at 2900 S. Shore Dr., opened with clarification concerning the recent history of developer interest in the At Random-owned footprint – which, according to Zielinski, includes the bar, the two houses to the south on Delaware Avenue and the three houses to the west on Russell Avenue. Original interest in the property began two years ago when a developer presented interest in an apartment building in the space. The idea eventually fell through.

Approximately a month ago, as previously reported by OnMilwaukee.com, a new developer began setting up meetings and approaching Zielinski about potentially building a 120-unit apartment complex on the space. Those plans were also dropped, however, and according to Zielinski, there are currently no developers looking at the space with proposals.

In the meantime, the bar remains open, though it's always been known for its erratic hours. 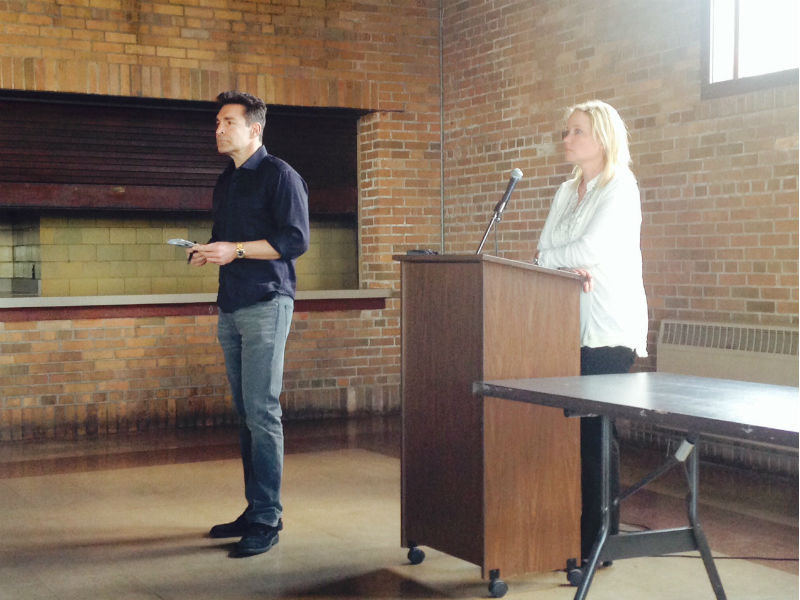 As for potential plans for At Random and the rest of the owner's footprint, Vanessa Koster of the Department of City Development further elaborated some of the zoning specifics for the property that could cause difficulties for developers looking to build an apartment complex on the area.

As of right now, according to Koster, while the At Random site is zoned as a local business (LB2), the additional five properties are zoned as two-family residential (RT4). As the zoning currently stands, Koster said developers could construct single family or duplex on the residential spots and up to eight units total on the At Random site.

"Hypothetically, the owner could apply for a zoning change to have all six properties combined to have the same local business zoning, and if that were to happen – this is all hypothetical – it could get up to 59 units as a right," Koster noted. "But that would have to go through a rezoning process, which would include the City Planning Commission, notification of a public hearing before the City Planning Commission, as well as the Zoning, Neighborhoods & Development committee and then the whole Common Council. So there would be neighborhood input if that were to happen."

Judging from Zielinski's comments during the meeting and those locals in attendance for the meeting, future apartment complex proposals would more than likely face resistance. Zielinski said that, "There is no way that an apartment building is going into this particular area if I have anything to do about it," while a quick poll of raised hands at the meeting showed the crowd was almost unanimously opposed to the building of an apartment complex on the space.

"It's going to be very difficult for them to get the zoning changed with this level of opposition from all the local residents in the area, so I really wouldn't lose any sleep over this," Zielinski said.

The owner of At Random was not present at the meeting, but Zielinski noted that he was invited and indicated last week to Zielinski that he was going to attend. Zielinski later added, however, that it seemed from their communication that the property owner's intention for the space was an apartment complex.

"I will hopefully be in communication with him in the next week or so, letting him know that it's very clear that this is not something the neighborhood would support," Zielinski said. "The ideal case scenario would be for him to sell it to someone else who is going to maintain At Random in its existing form and retain the integrity of that type of operational business."

Don't you forget about me: Blu Bar and Lounge

Don't you forget about me: Bounce / Fling