There are lots of places you can catch "The Hobbit" or the new "Night at the Museum" film, but see them at the revamped Avalon Theater, which opens tonight, and you get a double feature: a movie and an early look at a revamped Milwaukee movie palace.

There are lots of places you can catch "The Hobbit" or the new "Night at the Museum" film this week, but see them at the revamped Avalon Theater, 2473 S. Kinnickinnic Ave., which opens tonight, and you get a double feature: a movie and an early look at a revamped Milwaukee movie palace.

The theater is currently owned by Neighborhood Theater Group, which also operates the Rosebud Cinema Drafthouse in Wauwatosa and The Times Cinema on Vliet Street.

Unlike most grand movie houses in Milwaukee, which tended to be drawn by architects specializing in the genre – such as Kirchhoff & Rose and Chicago’s Rapp brothers – The Avalon, built in 1929, is the work of native son Russell Barr Williamson.

A disciple of Frank Lloyd Wright, Milwaukee’s Williamson worked for Wright and supervised work on the famed architect’s Bogk House and American System Built homes in Milwaukee – and the Imperial Hotel in Tokyo – before striking out on his own in 1918. Other than the Eagles Club on Wisconsin Avenue, his best-known works here are Prairie Style homes that many might mistake as the work of his mentor. 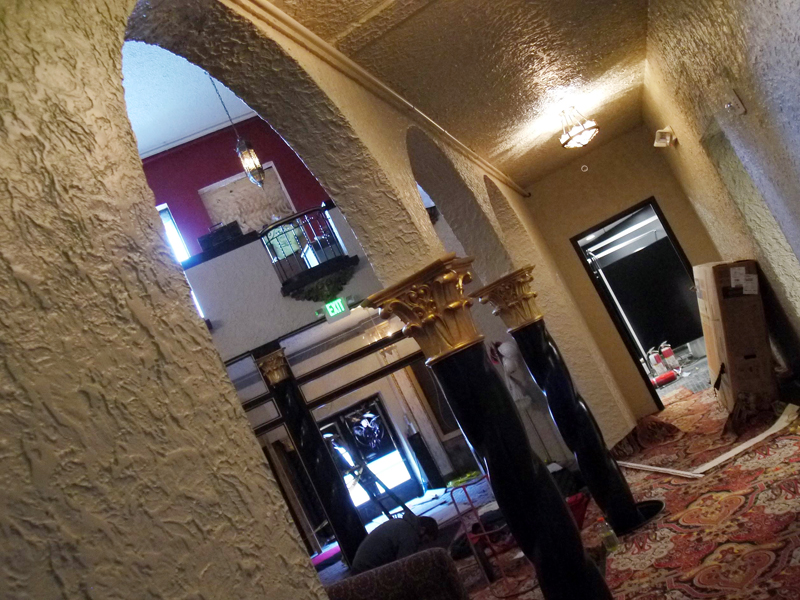 Last of a handful of atmospheric – read "faux open-air" – theaters in Milwaukee – six to be precise, including the Egyptian, the National, the Venetian, the Zenith and the Grand on Holton – Barr created a theater in the Mediterranean revival style, bringing an outdoor vibe inside and loading it with architectural and decorative details, many of which remain.

"The idea is one of putting an audience in another place and time, a specific place and time," said Neighborhood Theater Group’s Director of Operations John Brannan, during a tour last week, as a variety of workers attended to tasks on the exterior and throughout the interior, getting the Avalon ready for today.

"This whole atmosphere theater idea was kind of sweeping the country then. This one is a Mediterranean villa in the south of Spain; that’s the particular shtick here."

Neighborhood Theater Group owner Lee Barczak is spending more than $2 million to bring the long-shuttered Avalon back to life. The capacity of the main theater is now just upwards of 250, thanks to wide, comfortable individual seats that allow patrons to enjoy dinner and snacks with their films, and because the balcony is closed to the public.

"We are very excited about it … very happy," said Brannan. "It hasn’t shown any movies since 2000, so it’s been a while. It’ll be great for the neighborhood … great for the company."

Behind the stage, the second screen has been completely updated and improved to help prevent sound leakage between the rooms. This space makes the Avalon the only duplex theater in the group’s portfolio. And it will help make the business viable, said Brannan.

"The two screens helps, plus the food and beverage helps, the bar helps."

The retail space north of the 5,000-square foot lobby – and connected to it – will be a bar accessible from the street and from the theater. A cozy nook with an exposed brick wall creates an intimate vibe.

Just south of the lobby, another retail space has been converted into a full kitchen. A couple more retail spaces remain, as do 20 apartments that are also located in the building. Brannan said there is a plan to renovate the apartments, though he declines to share details.

"The retail spaces are leased spaces that will be available," said Brannan. "I think for certain types of clients they (the spaces are attached to a theater) would be a draw. We’ll definitely be bringing more traffic to this block."

As a former resident of the neighborhood, just a block away, I asked Brannan if the parking situation – the Avalon has no dedicated parking – is a concern.

"Yes it’s a concern," he said. "We think we’ll be able to overcome it. I think people are going to understand. Our Rosebud Cinema is on 69th and North and now that neighborhood is hot and you have to park three blocks away sometimes.

"You know it’s funny, North Avenue over the last two years has gotten so busy. A year ago, you would hear guests complaining about parking or commenting on it. I don’t really hear about it anymore. I think they’re just used to it. So we hope that’s not going to be a big distraction for people here."

Outside, the variegated brick facade is dotted with cast cement architectural details and there are terra cotta tile panels adding a dash of color. 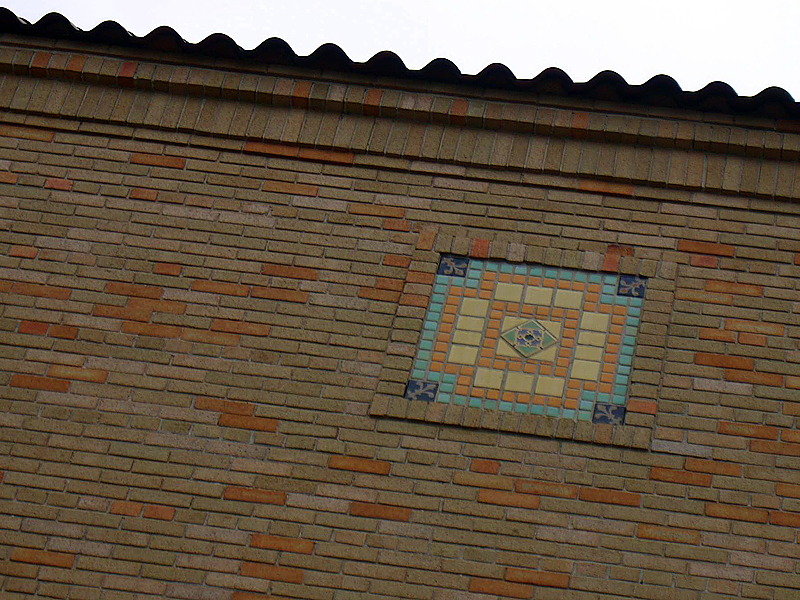 Back inside, the workers were laying new carpet everywhere, painting most every surface, putting together the kitchen – which will serve pizzas, panini and appetizers – building out the bar area. By the time you read this, most likely, a new marquee – mimicking the style of the original – hangs out front, and a new screen was added.

But perhaps the feature of the Avalon that shimmers most in people’s memories are the twinkling stars in the sky above the nearly 10,000-square foot main theater, which really give the place a big jolt of charm. Once, the bulbs had to be changed out from up above the ceiling, but now they’ve been replaced with an energy-efficient fiber optics system.

"It’s so much better than what it was," said Brannan as we gazed up to the heavens, where a shooting star traverses the firmament from south to north. "I heard that the old stars were about 115-watt incandescent light bulbs. This entire room was scaffolding, floor to ceiling, for five weeks this summer while we installed it. It was one of the earlier things done with the project." 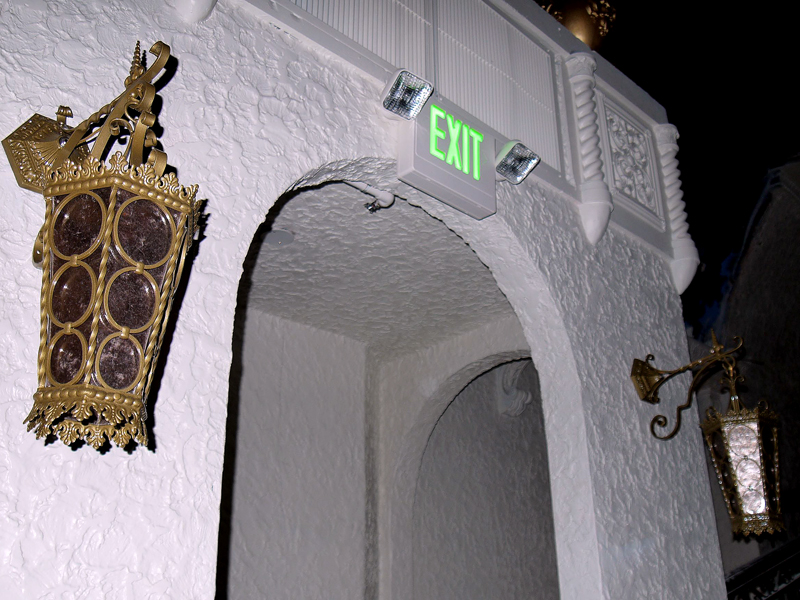 At the time of his death in 1942, Silliman was beginning to divest himself of these theaters and when his widow transferred the Avalon building to George and John Lindner – who hired William LaPorte to operate the theater – for $500,000, the chain no longer owned any buildings, but maintained lease-holds on the Astor, East and Jackson Theaters, which were then all operated by Fox.

Across the decades, concerts were held at the Avalon, which, for example, hosted a performance by the singing cowboy Rex Allen in 1948. In the waning years of the 1980s, Leo Kottke, Bonnie Raitt, Arlo Guthrie, fingerstyle guitarist Michael Hedges, legendary jazz violinist Stephane Grappelli, John Prine and Bonnie Raitt, among others, serenaded Milwaukeeans under the stars.

Now that a second screen fills nearly all the stage area, concerts are unlikely to return to the Avalon.

"No, concerts are not in the plan at the moment," Brannan confirmed, noting as an aside that the Avalon's orchestra pit has survived, though it is largely covered by a portion of the stage.

Perhaps more unexpectedly, the United Lutheran Church of America held Good Friday services at the Avalon in 1933 and ‘34, and perhaps other years. Seven years later, the seats were filled with steel workers at a union meeting to discuss a potential strike at nearby Nordberg Manufacturing.

In 1953, the Avalon made the briefs pages of national newspapers, which reported that manager Anthony LaPorte opened the morning mail one day to find an envelope with cash and a note saying, "Please accept the enclosed $5 bill. I have gone in the side door a number of times. Thank you."

Five years later the Avalon had a little brush with Broadway when 5-foot, 9-inch blonde Salome Jens, a 23-year-old former cashier at the theater – and "a beauty as exotic as her name," according to the Milwaukee Journal – landed on the Great White Way as a featured player in "The Disenchanted," kicking off a long career that included numerous stage, television and screen roles.

Though the Beatles never performed at the Avalon, the theater was one of five (two were drive-ins) in Milwaukee that premiered "A Hard Day’s Night" in August 1964, drawing hordes of screaming Beatlemaniacs.

Four years later, 200 theater patrons and residents of the attached apartments were evacuated when a fire broke out in the building.

The Avalon has undergone many ownership changes across the years. In the early ‘70s, it was owned by Charles Fitzner and Paul Nesphor, who also held South Milwaukee’s Garden and Cudahy’s Majestic Theaters. By 1977, it was owned by Jerome Stell and Bruce E. Ferrie. Within a few years, Tony Groh owned the place.

Avalon Investments purchased the building in 1989 and began operating the theater five years later, updating the air conditioning, bathrooms and seat cushions and, six years further down the road moving 160 seats to a small theater on the stage behind the main screen. This brought the capacity of the main theater to 1,100.

But Avalon Investments struggled with declining attendance and as the sun set on the 20th century, it also set on Bay View’s atmospheric movie palace. Barczak purchased the building for $1.1 million in 2005.

In the back theater, Brannan showed me the trap door that’s still in the gorgeous hardwood floor on the former stage. It was used to allow actors and props to move between the stage and the area below, where there were also dressing rooms. More dressing rooms were above, on the theater’s north side, including one that serves as the projection room for the small theater.

He showed me an old office with marquee letter storage and we head up to the projection room, passing through the balcony, which is now devoid of seats.

I asked Brannan if he’d ever seen a film at the Avalon in the past. 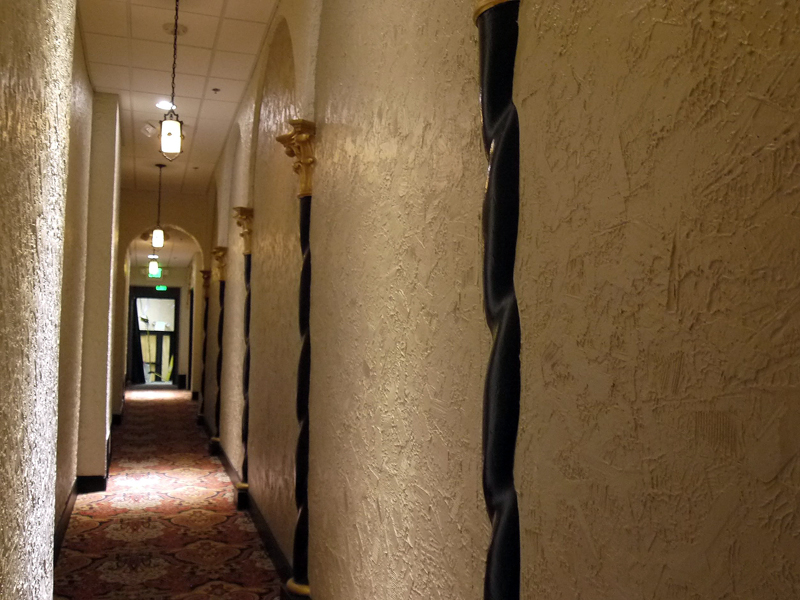 "I have not, he said, as we walked down a long stuccoed corridor that conjures moorish Spain. "My wife has and told me all about it, but I’d never been in here before I started with Neighborhood Theater Group. When I saw it I thought ‘Oh my god, this a great structure. This is just great. It’s wonderful."