The Bogk house on the East Side is Frank Lloyd Wright's most important work here. But the Milwaukee area is also home to what I call the "baby Bogks," which are not Wright houses, but home designeds by Wright's right-hand man Russell Barr Williamson.

While some of the Milwaukee-area works by Wisconsin’s most famous architect Frank Lloyd Wright have met the bulldozers, others – like the series of System-Built homes on 27th and Burnham, and the Annunciation Greek Orthodox Church on the far northwest side – survive.

One of the most intriguing survivors is the Bogk house, at 2420 N. Terrace Ave., on the East Side, built in 1916 for politician and businessman Frederick Bogk. In his "Heritage Guidebook," H. Russell Zimmermann called it "the most important example of Wright’s work" in Milwaukee. 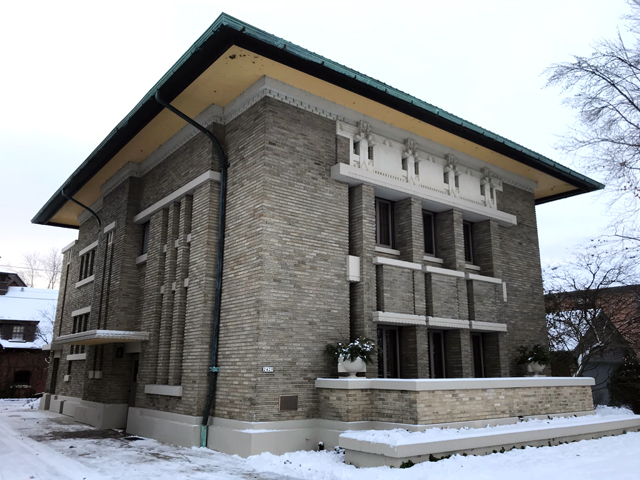 The weighty structure stands out amid the more traditional architecture on its street, and you can’t miss its striking Prairie Style facade, with broad eaves and horizontal lines.

In his "Death In A Prairie House: Frank Lloyd Wright and the Taliesin Murders," William R. Drennan suggests Wright's architecture changed, becoming "more somber, more cautious," after the 1914 murder of seven adults (including Wright's lover) and children at the architect's Taliesin home and studio in Spring Green, leading to designs like the Bogk.

"What had been broad windows, open to the natural world all around, became slits; slab roofs most often replace low-hipped ones; horizontal line becomes vertical blocks of poured concrete."

"Descriptions of (the Bogk house) routinely resort to adjectives such as 'heavy' and 'massive.' As (author Robert C.) Twombly notes, 'Not the environment-embracing but the fortress-like aspects ... characterized Wright's newest efforts'."

The Bogk house was designed at a time when Wright was influenced by Mayan and Aztecan motifs, too, and as Joan Marter noted in "The Grove Encyclopedia of American Art," "Explicit, albeit loosely interpreted, Mayan references appear in his work from 1915 with the A. D. German Warehouse (1915) in Richland Center, WI, the Bogk house (1916) in Milwaukee, and the Barnsdall House (1916-22) in Los Angeles whose plan recalls ancient Mayan triangles."

This aspect of the design is easily spotted in the frieze on the front of the Bogk house.

There are many Wright houses that include bits and bobs of other Wright houses and reflections of the the Bogk house can be seen in other FLW works, like the residence he built in 1921 for Aline Barnsdall in Los Angeles.

Interestingly, the Milwaukee area is also home to what I call the "baby Bogks," which are not the work of Wright. They are, instead, homes designed by Wright’s one-time right-hand man Russell Barr Williamson.

Born in Royal Center, not far from Lafayette, Indiana, in 1893, Williamson's first job after he graduated from Kansas State University in 1914 was with Wright in Chicago. He quickly rose in the ranks to become Wright's chief assistant.

Having left Wright's practice in 1918, Williamson set up his own in Kansas City, but moved to Milwaukee soon after, where he would design still-familiar structures like the Eagles Club on Wisconsin Avenue and the Avalon Theater in Bay View.

The Nathan Stein House, at 3965 Harcourt Pl., Shorewood, built in 1921, is just one of a number of Williamson homes in the Milwaukee area – including one he built for himself on Oakland Avenue – and it’s not the only one with traces of the Bogk, according to author Kristin Visser. 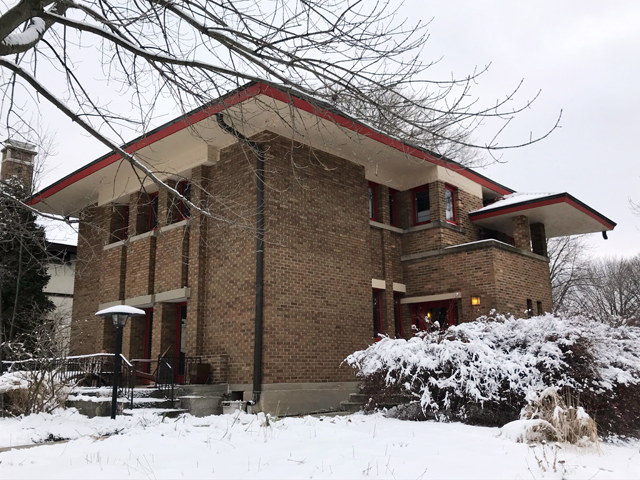 "The Stein house is the one that from the outside looks most like a copy of Wright’s design. It is simpler and smaller than the Bogk house, but Williamson manages to use virtually all the architectural and decorative elements found in the Wright design."

But architecture, like other art forms, is often a collaborative conversation in which it's not always easy to clearly and effectively parse who contributed what.

Some even believe that Williamson himself drew parts of the Bogk house.

Art historian Juanita Ellis, in a 1974 master's thesis, wrote "the Bogk house's exterior bore the simplicity of Williamson's style. ... (there are) striking similarities in the details found in the Bogk house and many Williamson houses."

According to Nicholas D. Hayes' book, "Frank Lloyd Wright's Forgotten House" (which also included the Ellis information above) – about a Wright house in Shorewood in whose construction Williamson played an indirect role – "Shirley du Fresne McArthur ... show(ed) that later plans by Williamson for a 'square house' are themselves a close copy of plans by Wright for a 'fireproof' house."

Hayes notes, too, that a small Williamson-designed house across from the "forgotten Wright house" – the Eggers bungalow – is "Bogk-like, and that small home has a mirror-image twin in the Lexa house on North 65th Street in East Tosa. Other riffs on this design can be found on Wellauer Place in Wauwatosa and on East Circle Drive in Whitefish Bay.

The original Wright-designed house was designed for Bogk, who was born in Sheboygan Falls, but came to Milwaukee at the age of 7 with his family.

Bogk’s father was a butcher, but Bogk himself starting work on the Wisconsin Central Railroad, retiring from that work in 1908, at which point he joined the Ricketson Mineral Color (Paint) Works, where he rose to the post of president by the time of his death.

Bogk was twice elected alderman in the 15th Ward and later served 12 years as an at-large alderman.

Bogk lived in the house until 1936, when at age 71, he stepped out of a cab on Palmer Street on the way to see a chiropractor and collapsed and died. Bogk’s widow Katherine lived at the Terrace Avenue house until her death in 1953, when it was sold by the family.

The current owner, Barbara Elsner, bought the house in 1955, and is just the third owner.

Because Wright had to supervise work on his Imperial Hotel in Tokyo, he left for Japan in December 1916. In his absence, he left Williamson to oversee the construction of the Bogk house.

"Credit for the high quality of this structure must go to Russell Barr Williamson, who supervised construction while Wright was in Japan and on the West Coast, relaying what instructions he could by cable," wrote William Allin Storrer in his book, "The Frank Lloyd Wright Companion."

At the time Williamson – who was heavily involved in Wright's plan to create an affordable means of creating houses from pre-fab parts called the American System-Built Homes – also supervised the construction of Wright's Munkwitz Apartments on 27th and Highland, also begun in 1916, and completed in spring 1917 around the time Wright returned from Japan.

Here’s how Visser describes the Stein house, which remains a private residence, not open to the public:

"The Stein house interior is less obviously a derivation of the Bogk house plan. The living room does not take up the entire front of the house as it does in the Bogk house, and the living spaces are partially delineated by going two steps up or down, as in the Bogk house, but the floor plan in the Stein house is much simpler. The plan flows around a large central fireplace, which partially separates the living room from the dining room and the entry hall. A sun room and the kitchen occupy the rear of the house. Upstairs are four large bedrooms.

"Williamson used a number of his stock items in the Stein house, including his small rectangular floor tiles, one of his leaded glass designs and the light fixtures."

Though Williamson – who died of a heart attack at 71 in 1964 in Oostburg, where he was then living – left Wright’s employ in 1918 and struck out on his own, he didn't abandon the influence and principles of the Prairie Style (note the 1923 newspaper advertisement, above right), though he did work in other styles. 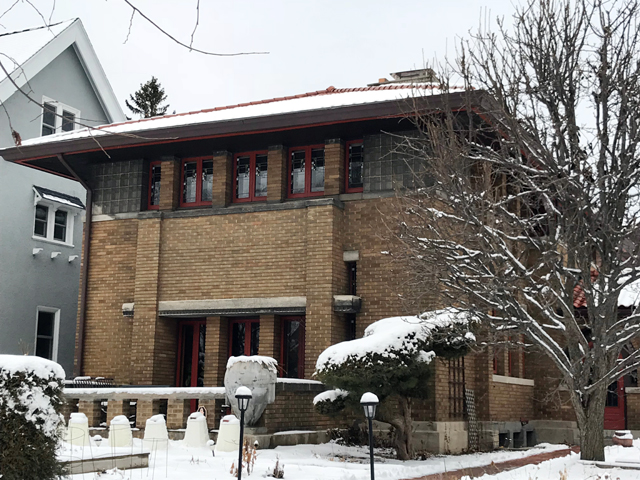 Interestingly, while other Williamson gems in Milwaukee draw on the Bogk house – notably the beautiful Bours house (pictured above) at 2430 E. Newberry Blvd., also built in 1921 – Williamson drew inspiration from a different FLW work for his own home at 4860 N. Oakland Ave.: the Henry Allen house in Wichita ... the construction of which he also supervised.

Coincidentally, on the day of Williamson's death, the Milwaukee Journal had a photo of the Bogk house on its front page with a blurb about a tour by the city's historic landmarks commission, which was considering buildings for designation as landmarks. The caption read, "this house was designed by Frank Lloyd Wright and constructed under his supervision."

To read another story about Wright and Williamson, click here.