Beyond a concrete jungle of cement lots and warehouses on Bay View's North Edge lies one of Milwaukee's most hidden venues, and one of the city's worst kept secrets: Barnacle Bud's.

Beyond a concrete jungle of cement lots and warehouses on Bay View’s North Edge lies one of Milwaukee’s most hidden venues, and one of the city’s worst kept secrets: Barnacle Bud’s.

The venue, located at 1955 S. Hilbert St., was created by the owners of Skipper Bud’s to service boaters who docked along the banks of the Kinnickinnic River. In fact, when Gene and Victoria McKiernan signed a lease on the space in 1993, the "yacht club" was little more than a small shack with an ordering window surrounded by a few picnic tables overlooking the river. 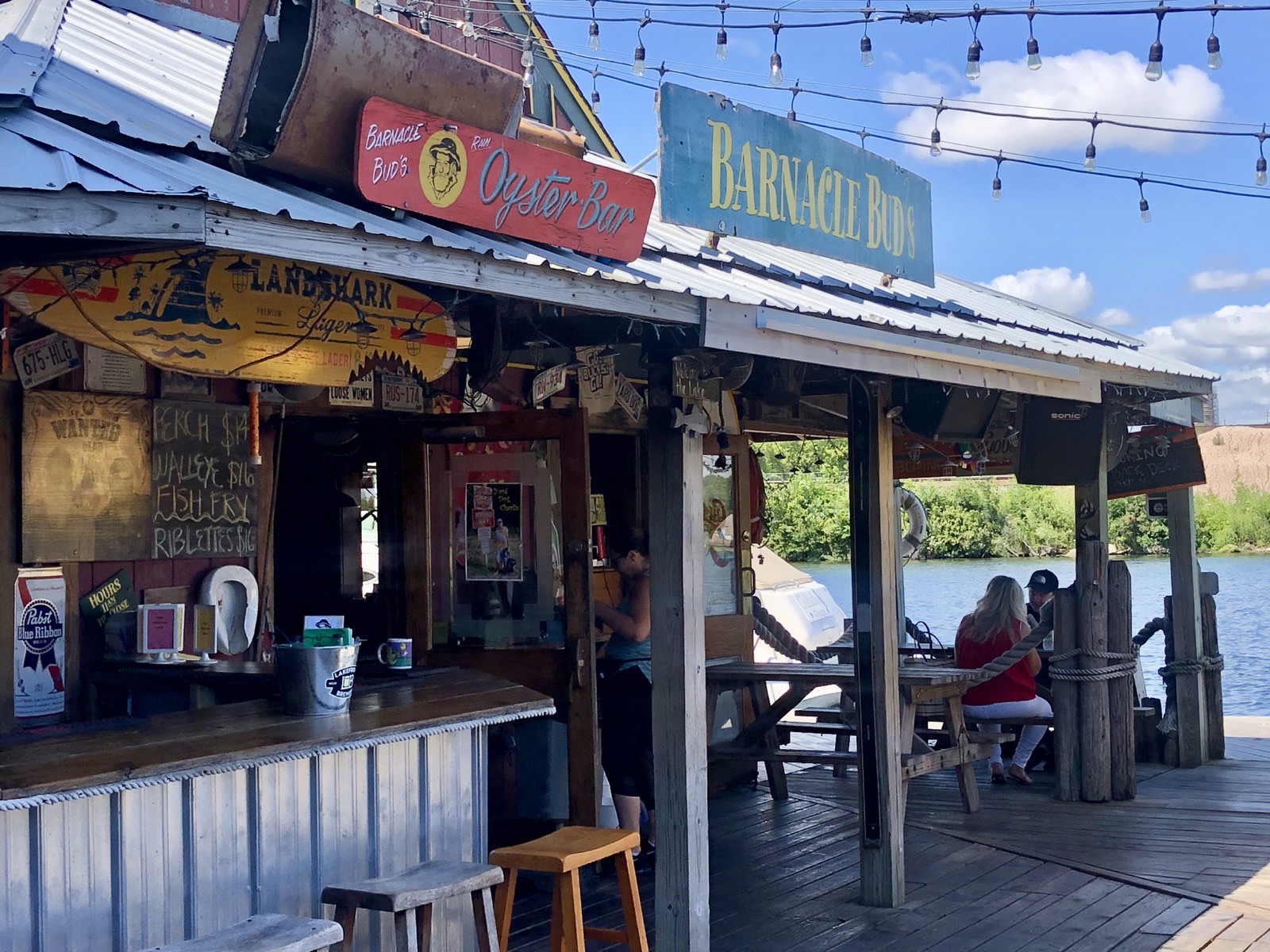 At the time, McKiernan owned and operated two other bars: Rusty Bucket in Walker's Point and Chump's Spindrifter on 90th and National. But he says he was always looking around for something new.

"Every place I’ve ever bought was either closed or run down," he says. "I get bored easily and I really like a challenge. Whenever things start going well, I look for something else to liven things up. I create things that I think other people will like."

And that’s exactly what he did.

Today, the little shack remains. The ordering window is now an oyster bar where guests can indulge in freshly shucked mollusks alongside their beverage of choice. It sits astride a tiny 25-seat restaurant that feels a bit like the bowels of an old ship. 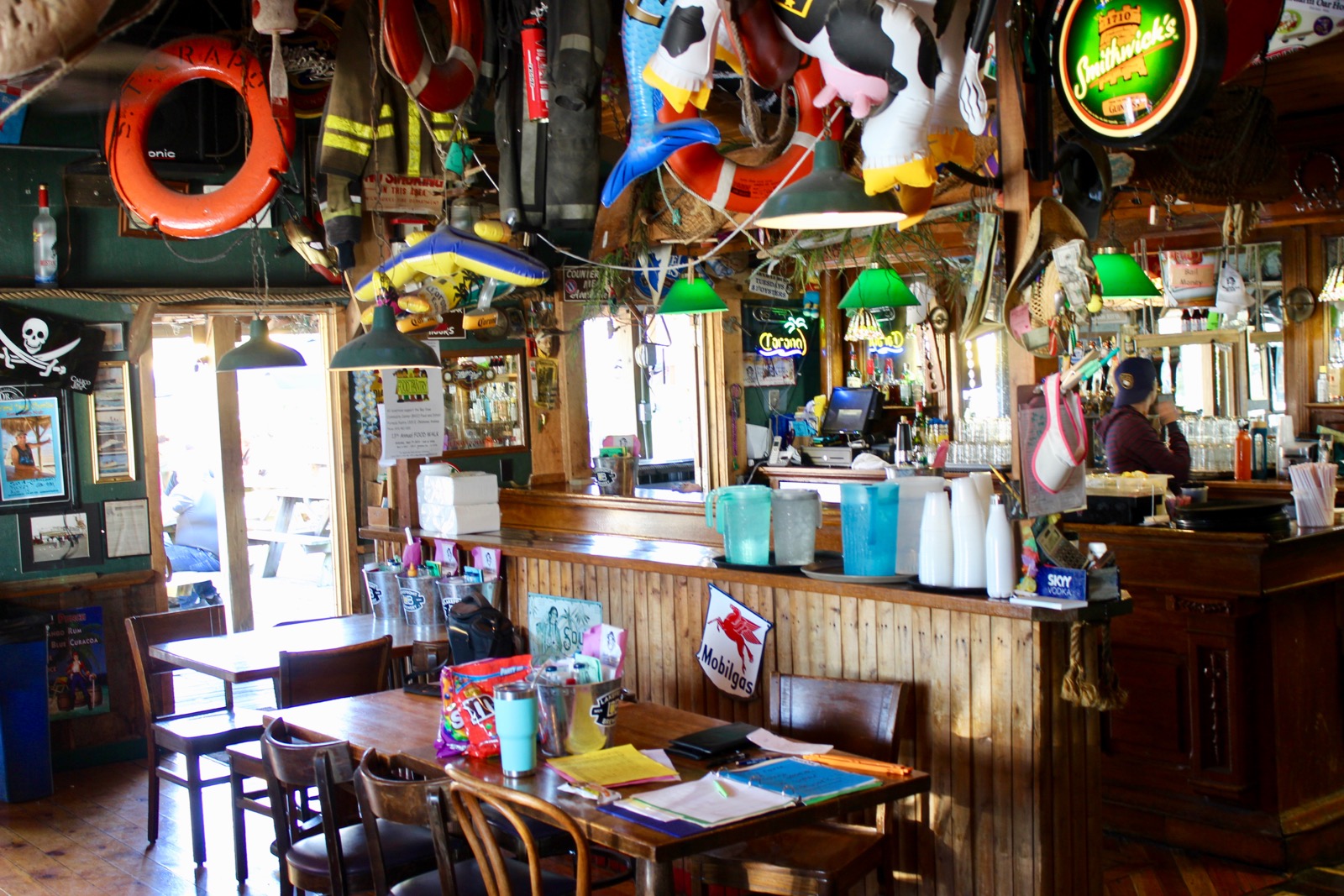 But it’s the wrap-around dockside patio that attracts a rotating crowd of sometimes over 100 sunshine-hungry Milwaukeeans, who stop in to enjoy lunch, dinner or a few cool drinks with a riverside view. 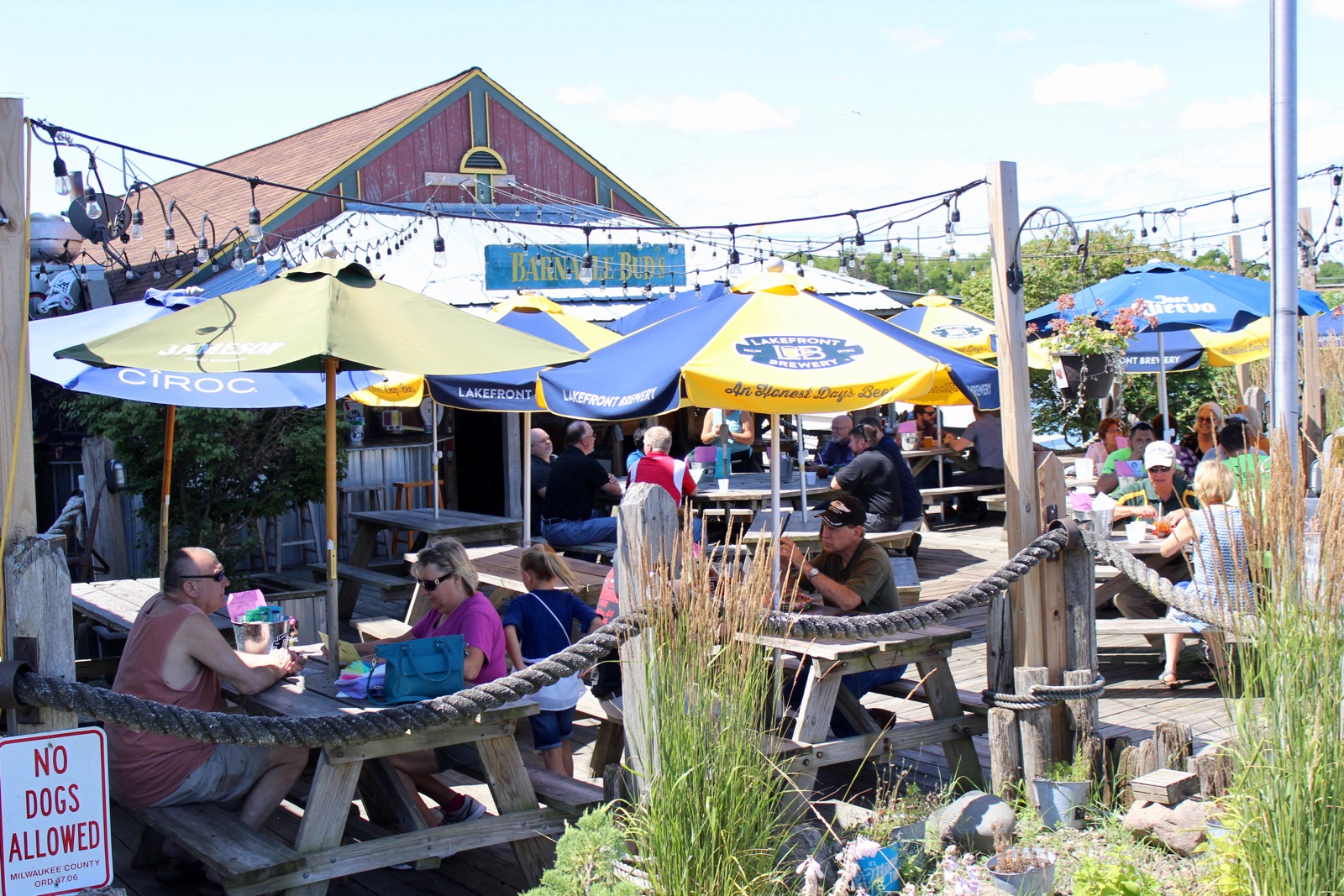 The main patio features picnic table style seating perfect for groups. But you can also grab one of a few two-seaters on the pier, where you can claim a  birds eye view of the river, track the progress of the $285 million Komatsu Mining headquarters and glimpse portions of the Milwaukee skyline, including the Allen-Bradley clocktower. 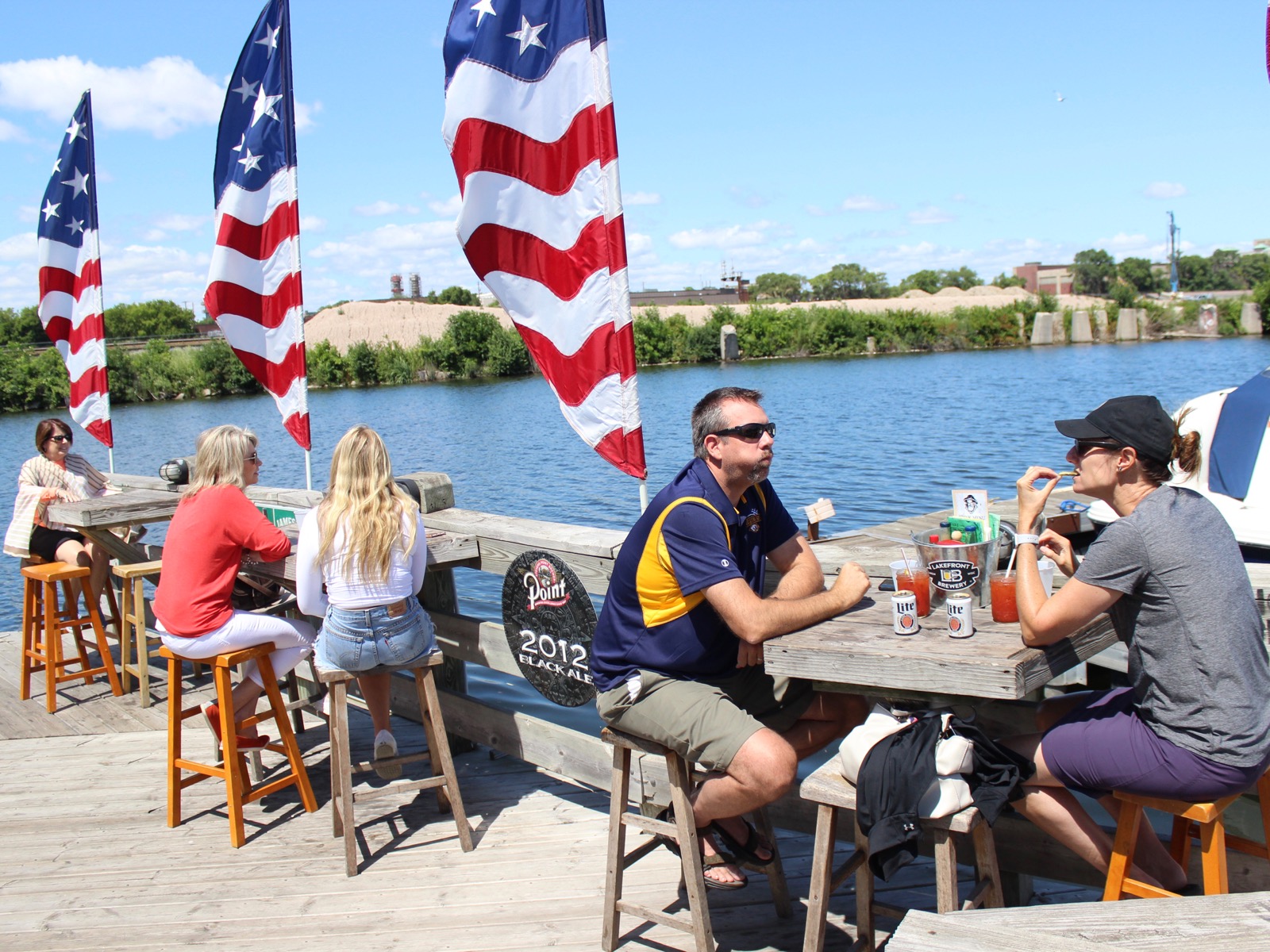 On any given day, you might see towering cement ships on their way to or from St. Marys Cement, one of the many industrial businesses tucked back along the river. Or you might catch wind of the "Lynyrd Skymmr," a long debris-skimming boat operated in partnership with the MMSD which scoops up plastic containers, dead fish, tree branches and trunks, as well as other floating debris that could damage the propellers on unsuspecting boats. 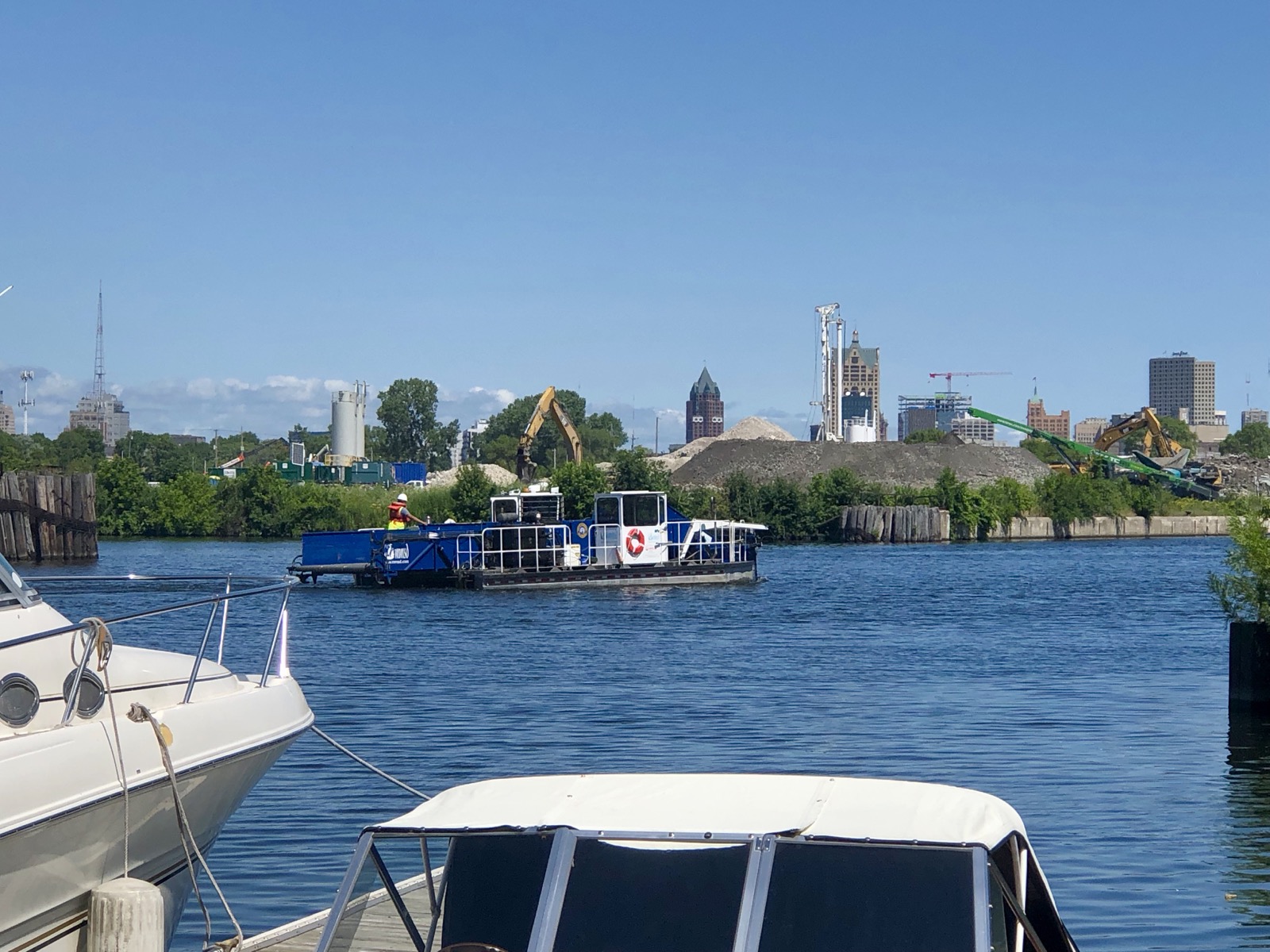 McKiernan says it took years to build out the patio to its current state.

"For the first six years, I didn’t even have an open sign," he says. "It used to be, I’d put my chaise lounge out back and when people showed up, they’d know where to find me," he says of the southern patio addition, which is now outfitted with a covered deck and additional bar. 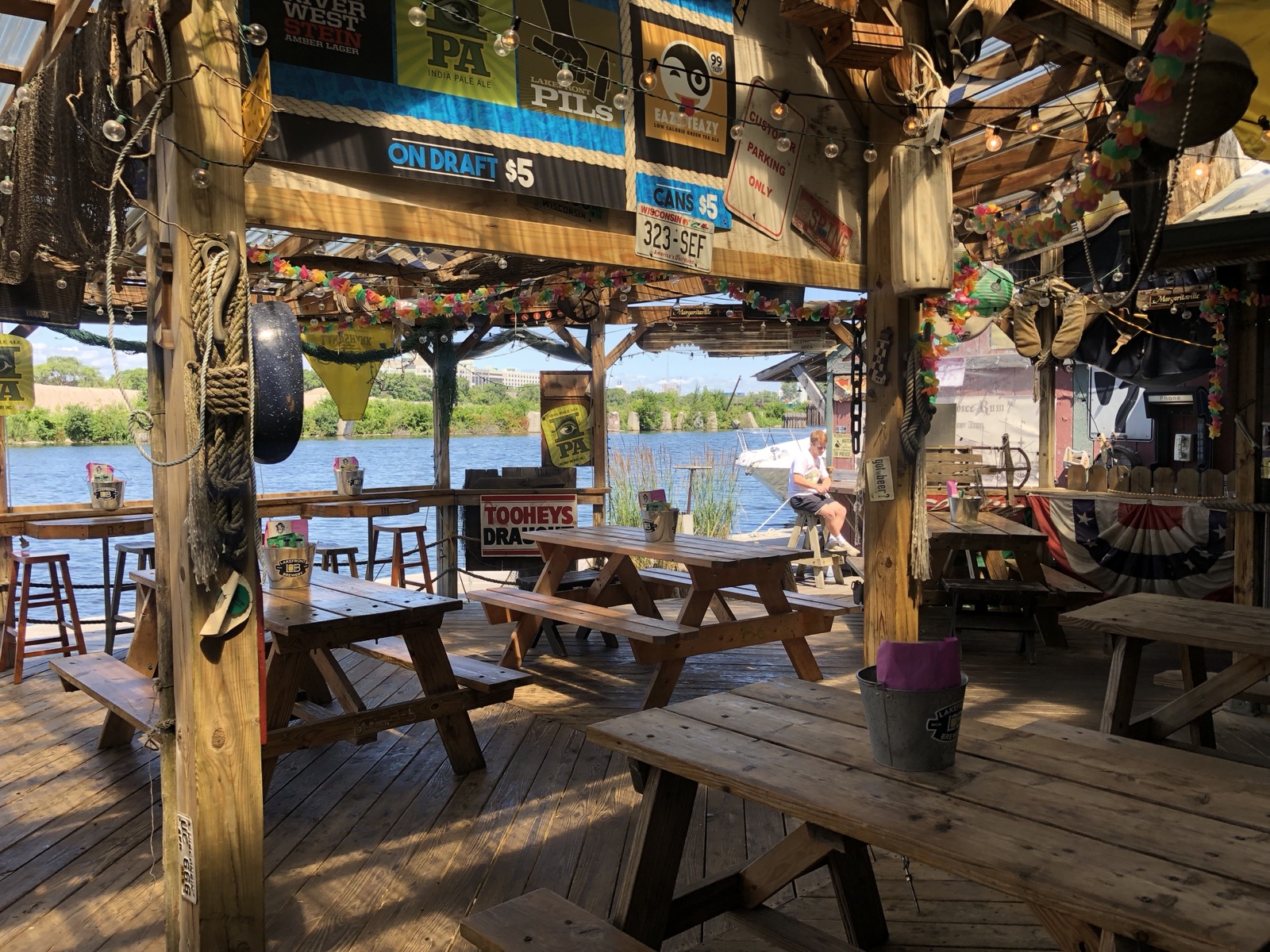 "There was always gravel back there," he explains. "And as we got bigger, I put more gravel back there and a few chairs. Eventually we added the deck with the roof over the top. It’s also become our designated smoking area, since you need one of those."

Head back to the deck and you’ll find any number of quirky items, from an old abandoned washing machine to a rotary dial phone, cast-off beanie babies and a wide variety of signs. 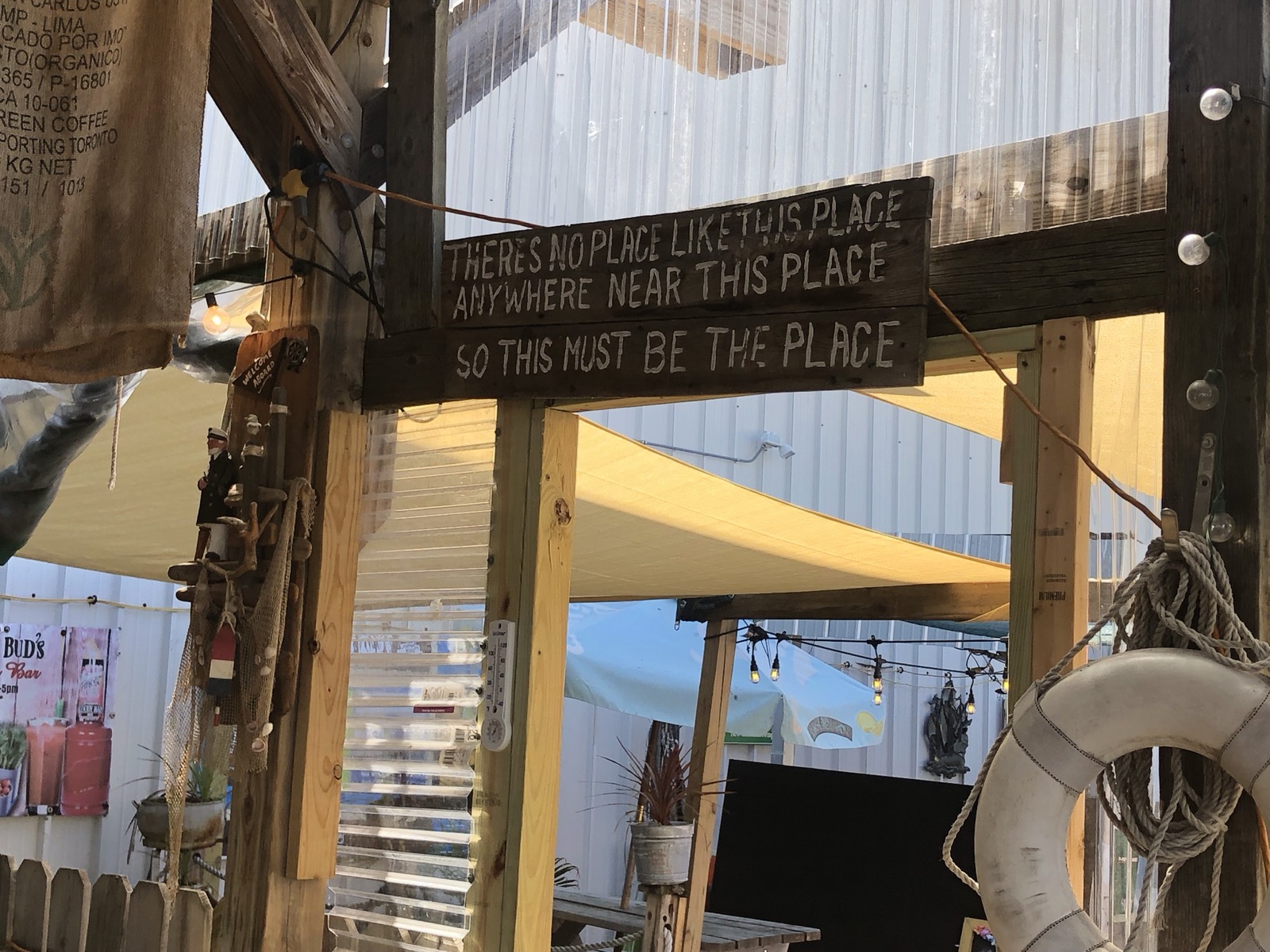 Don’t miss the opportunity to Instagram your portrait with the life-sized Gene McKiernan cardboard cutout.

"Sometimes I like to come back here and just sit by myself," McKiernan jokes. 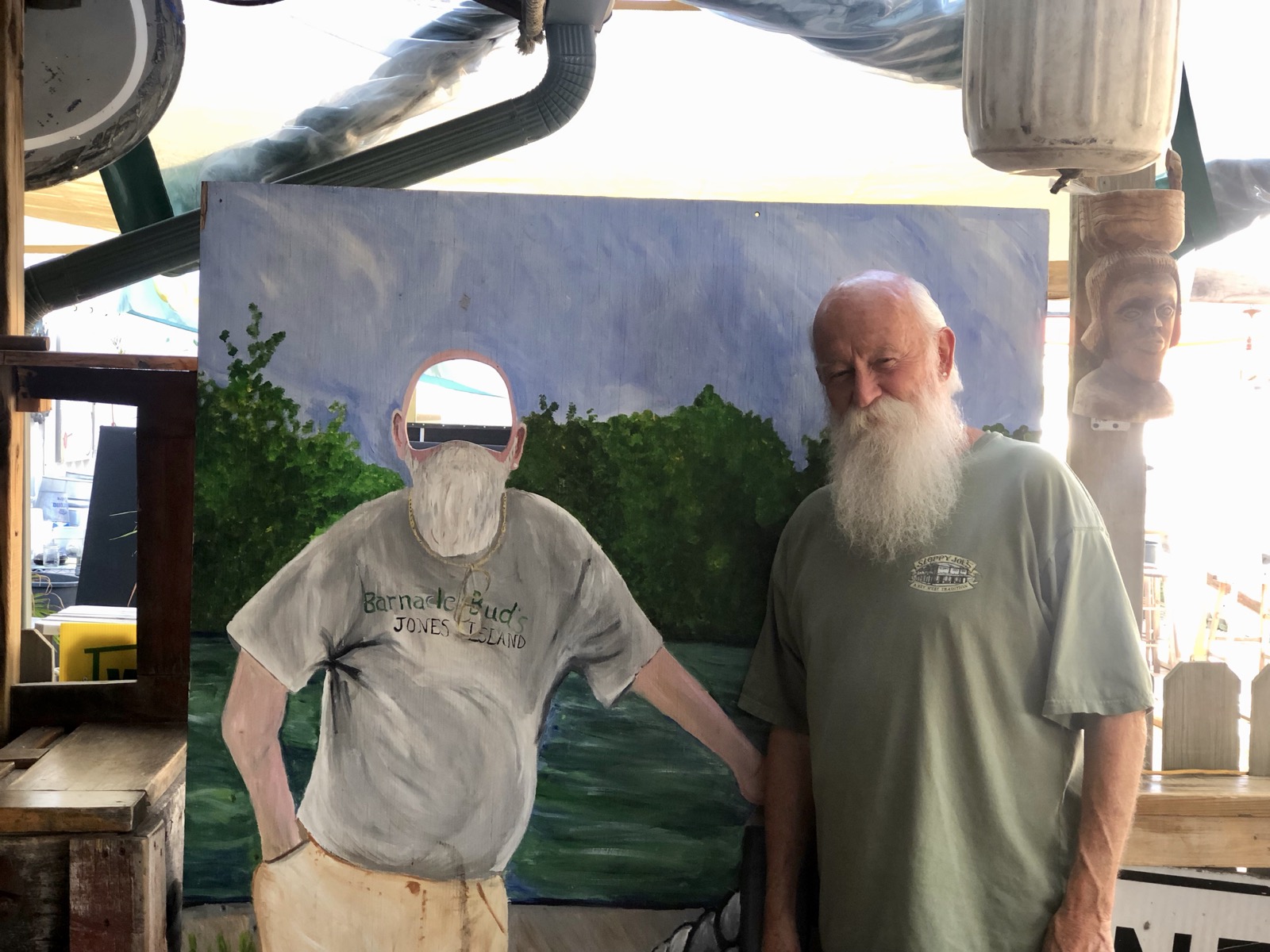 The deck and adjacent gravel-strewn area also accommodate crowds for events like Barnacle Bud’s annual crawfish boil, held in June each year for the past 13 years. The event is so popular McKiernan says they’re likely to launch another end-of-summer event sometime in September… "probably a crab boil," he says.

"I always figure if you draw people to a place and give them a good time, they’ll be back," McKiernan says. "It’s the employees that really make the place. I give them the leeway to handle things as they see fit. I let them be themselves ... I want them to have fun. And they do."

Day drinking is a popular pastime at Barnacle Bud’s. And you’ll find all the usual players, from craft beer (including tap selections from Lakefront and Third Space) to Barnacle Bud’s popular Bloody Mary ($9 or $10 during the build-your-own Bloody Mary Bar on weekends between 11 a.m. and 4 p.m.). 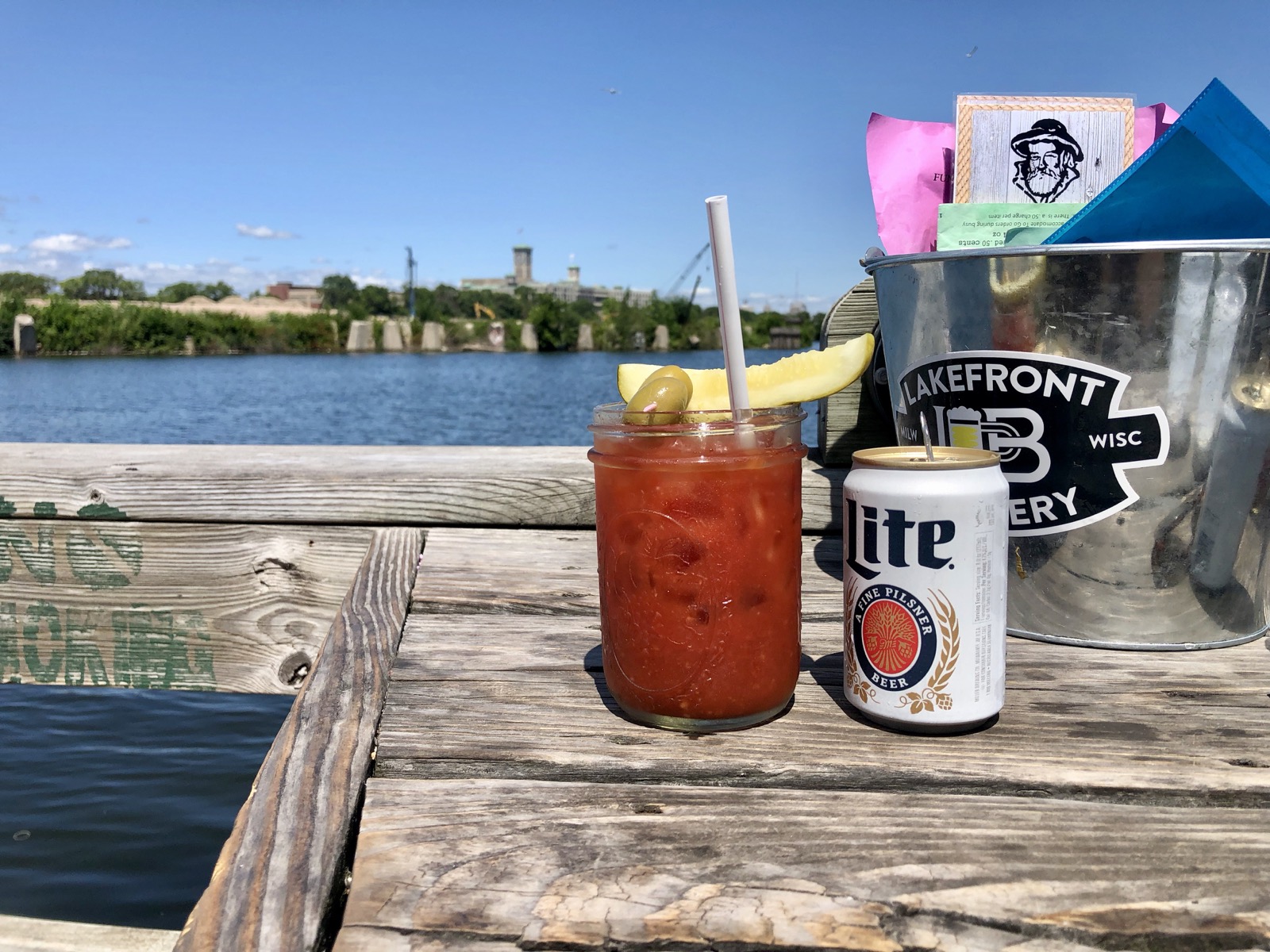 There are also cocktails, including margaritas, dark & stormys, Moscow mules and palomas ($9-$10). But McKiernan says that drinkers "in the know" order the Dumpster Punch ($9), which "cooks overnight in the dumpster in the sun… we siphon it off fresh every morning."

But you shouldn’t believe a word he says. Despite its black color, the punch is a fruity island-inspired concoction made with mango rum and a secret combination of fruit juices. 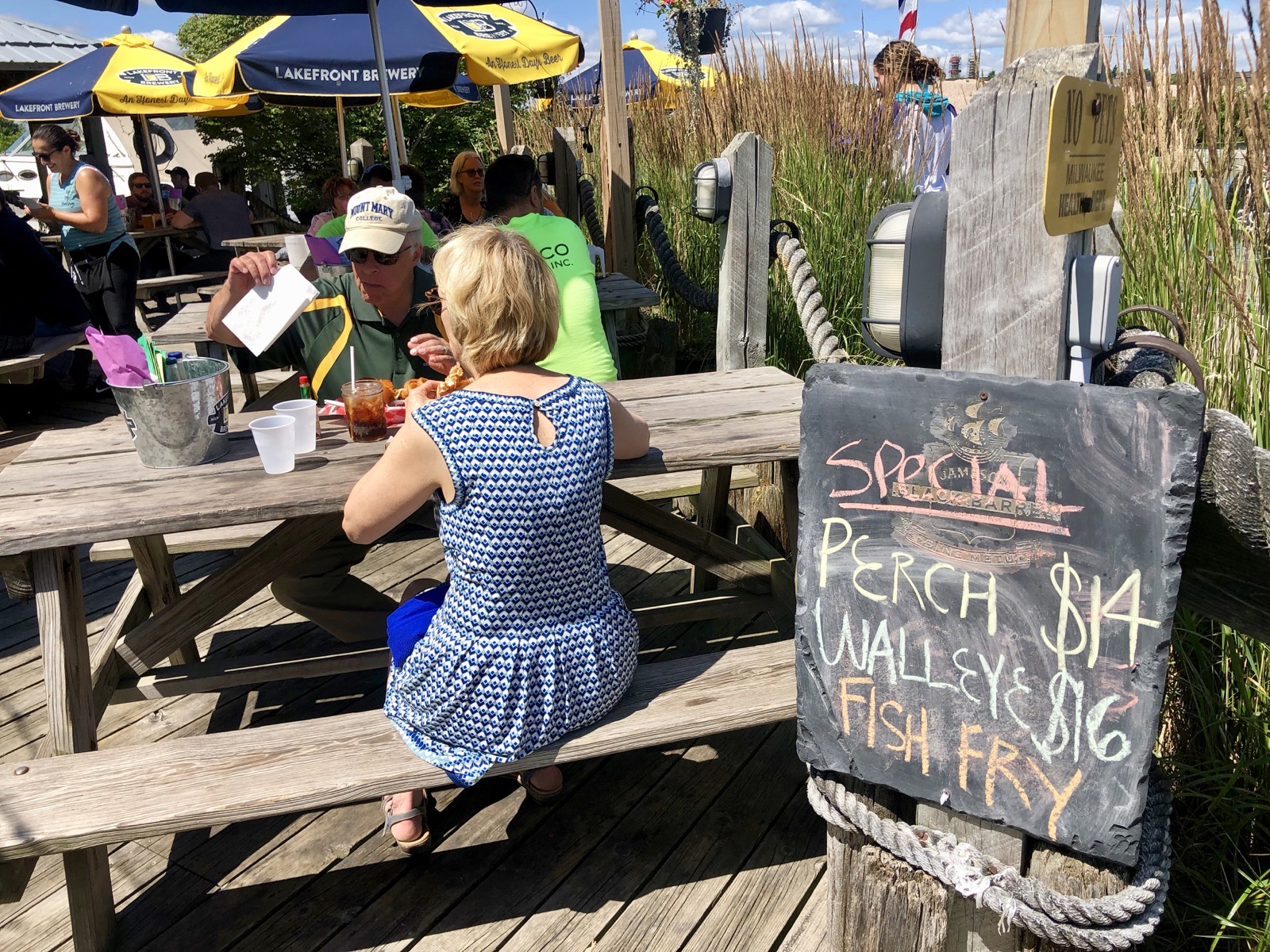 Beyond that, there’s a relatively extensive menu of items created by Chef Jose Melendez. McKiernan says the best sellers include oysters ($2.50 each or $1.50 each on Tuesdays), crab cakes ($13) and the Barnacle Bud’s brisket burger featuring a ground Angus brisket patty topped with cheddar, bacon, bbq sauce and beer battered onion rings ($15),

But the star of the show might well be the Grouper Reuben featuring fried grouper, cole slaw and Swiss cheese on toasted marble rye ($15). It’s a sandwich regular customers Susanne and Ed Mac stop by to order at least once a month. 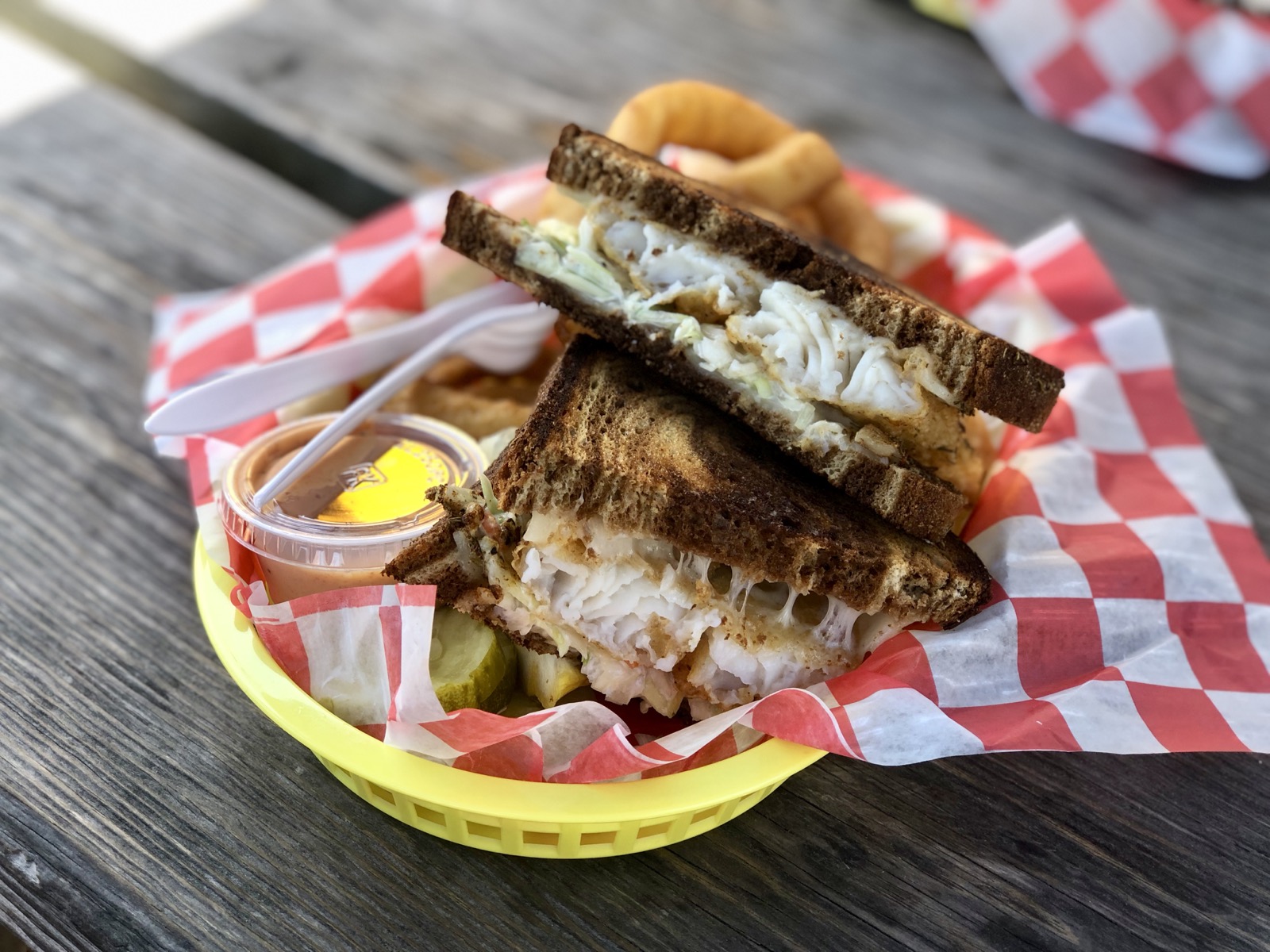 "We’ve eaten Grouper all over Florida, but it’s never this good," says Susanne, "This is really the best."

"We send all our friends here to try it," Ed adds.

It’s a particularly popular item over the lunch hour, when the restaurant does a bustling business most days of the week. "We’re busiest at lunch and all day on weekends," McKiernan says, noting that evening traffic depends on both the weather and whatever is going on around town.

"Wherever there’s sun, there’s people," he says. "… they’re a lot like flowers. People sit out here on the patio year round, even if it’s cold outside … as long as there’s sun."

When you ask McKiernan what he does in the off-season, he chuckles. "I go to rehab," he says with a smirk.