For years, ice may have been the most overlooked ingredient in craft cocktails. But times have changed. And, as the fascination with craft cocktails made with high-end ingredients grows, there’s been a movement to create better ice with which to chill them. As a result, fancy ice companies have been cropping up across the country, meeting demand for bars in spots like Chicago, Minneapolis, New York and even Texas.

Despite growth in the movement, high-end ice was impossible to find in the Wisconsin market … until now. Beaker & Flask Beverage Co., a Milwaukee-based company specializing in cocktail consulting and product development, has launched a new offering: crystal clear cocktail ice, a product that’s not only more beautiful than your average ice, but also harder and colder.

The result? A better cocktail.

"Ice is the most important part of a cocktail," says Joey Houghtaling, co-owner of Beaker & Flask, noting that quality ice boils down to two factors: clarity and dilution rate. "When you use larger, well-built cubes, the dilution rate is slower since there’s less air trapped in the cubes. When there’s less air, the ice melts more slowly, so you have a lot more control over the flavor of the cocktail. When you start with better water, you’re also not adding any off flavors from minerals or additives like fluoride."

But it’s not just shaken cocktails that benefit from better ice. Co-owner Mike McDonald, who also works with Madison’s State Line Distillery as an ambassador and product developer, says the investment in quality ice allows consumers to get more enjoyment from their beverages.

"There’s also a wow factor when you see the clarity of the ice in the glass," he says. "But it’s also about increasing the quality of the drinking experience. Take a glass of Scotch, for instance. Being able to maintain a consistent temperature over the duration of time that you’re drinking it, without watering it down, is pretty priceless."

Houghtaling says that, for years, he’s spent time hand-cutting his own ice. Unfortunately, it’s a laborious process, and one that results in higher labor costs for bars.

"We’ve both worked larger markets and have seen the ice that’s available to bars in those places," notes Houghtaling. "And we wondered: why isn’t this available here? We’re making cocktails that are just a good, but we don’t have access to the same quality of ice. Wisconsin has never had a crystal clear ice purveyor. And it’s the one element that’s been missing from even the best cocktail programs in the area." 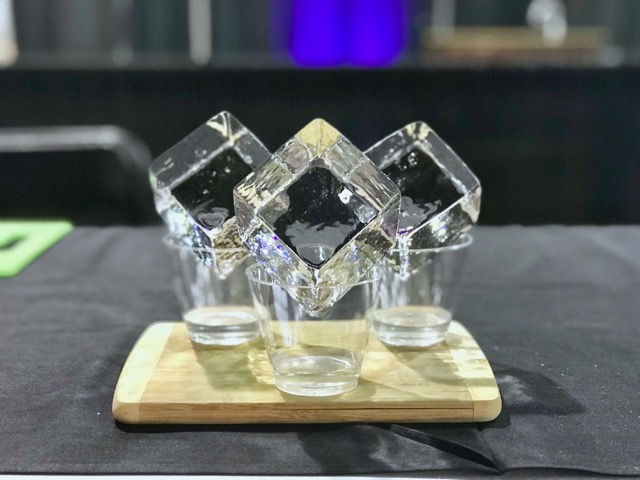 Houghtaling says that, in many ways, they’re going back to the way ice was originally made.

"Way back, ice came from slabs that folks cut from frozen lakes," he says. "The way water freezes on the surface of a lake is distinct. It’s a process during which the water freezes slowly, in layers. And that results in a super clear block of ice."

At Beaker & Flask, they simulate the freezing process using a Clinebell machine.

"Cloudiness in ice comes from two factors: impurities in the water itself and air bubbles that become trapped in the ice during the freezing process," notes Houghtaling. "The average ice maker (such as the ones used in restaurants and those installed in home refrigerators) freeze ice quickly, a factor that’s convenient but which creates a cloudy cube. Air that gets trapped in the quickly-freezing cubes also contributes to a quicker thawing process, meaning your ice melts and turns back to water more quickly."

Alternatively, a machine like the Clinebell operates in a more slow, deliberate process, creating ice that is crystal clear, rather than cloudy. 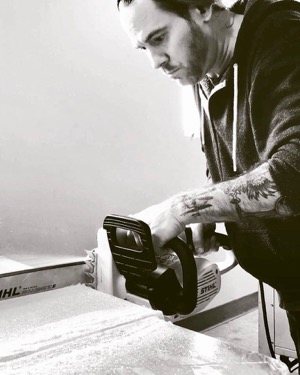 The process begins with water that’s been purified through reverse osmosis. That water is poured into an open chamber in which a pump circulates air into the water. As the water freezes at a slow, consistent temperature, the circulating air pushes out impurities and minerals. The slow steady temperature freezes the water in stages, from the bottom up, helping to create a more perfect structure in the ice crystals.

From there, the ice blocks are cut and hand-cut into smaller cubes using a specialty saw. Houghtaling says they’re currently creating two cube sizes: a standard 2-x-2-inch square and a 4.5-inch spear that’s perfect for use in collins glasses. Houghtaling says that custom cuts are also available.

Beaker & Flask is currently operating out of a facility attached to State Line Distillery in Madison. But Houghtaling says that a Milwaukee-based facility is in the works.

In the meantime, ice is being transported to Milwaukee and sold to area bars and restaurants including Lucky Joe’s in Wauwatosa, Boone & Crockett in Bay View, Twisted Path Distillery and the cocktail lounge at State Line Distillery in Madison. For consumers who’d like to upgrade the ice for their home bars, Beaker & Flask ice is available exclusively at Ray’s Wine & Spirits. The cost is $8.99 for 12 2-inch square cubes.