Exploring Beloit - both old and new

Arriving at the Hotel Goodwin in Beloit, the kindly woman at the front desk welcomed me and said the city has changed ... "a lot." Even spending just a weekend in this border town an hour southwest of Milwaukee was enough to make that quite clear.

Arriving at the Hotel Goodwin in Beloit, the kindly woman at the front desk welcomed me and asked, "is this your first time in Beloit?"

I told her I’d been here a couple times before but not in a long time.

Even spending just a weekend in this (Illinois/Wisconsin) border town an hour southwest of Milwaukee was enough to make that quite clear.

The hotel itself, which opened in September, is a perfect example. 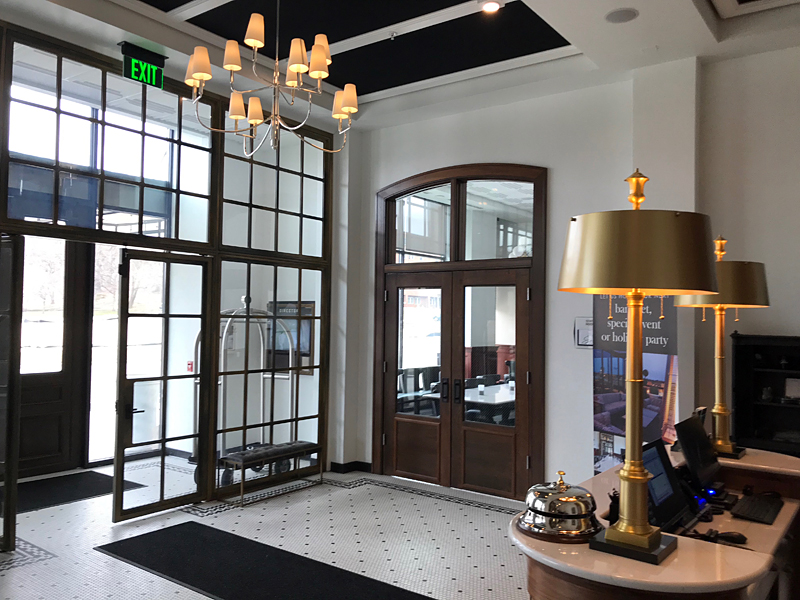 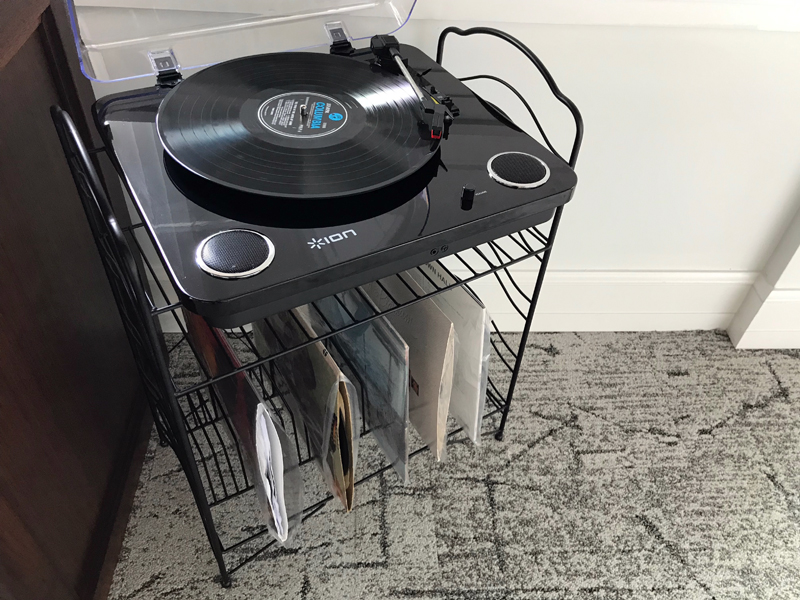 The three-story Goodwin, which opened in September at 500 Public Ave., is housed in a gorgeous 1923 former office building that was home to the Beloit Water, Gas & Electric Co. 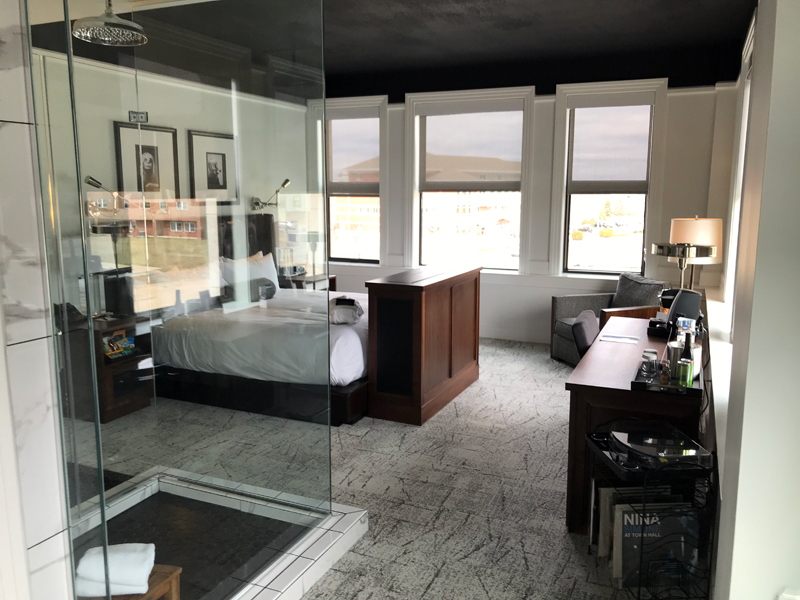 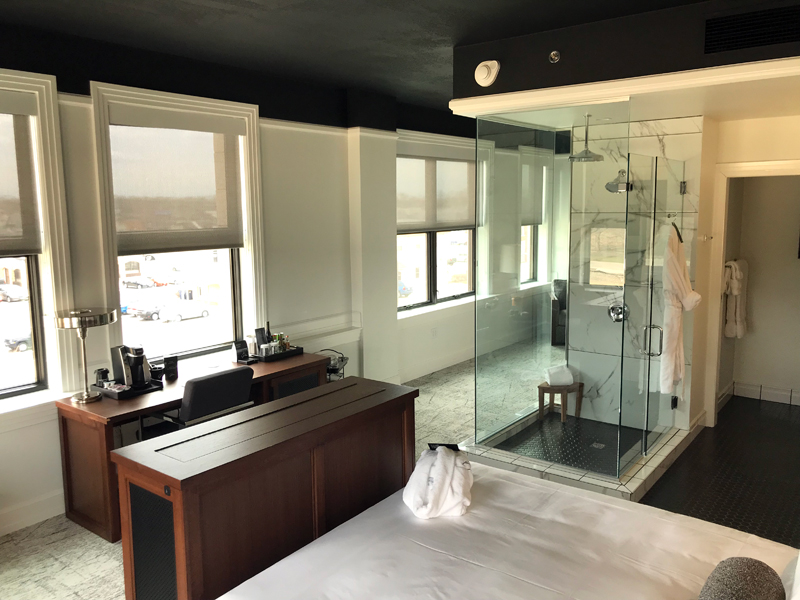 Inside, the place is stunningly modern, but vintage details – like the tiled lobby floor and the decorative iron railings on the staircases – make it a pitch perfect marriage of old and new.

The Goodwin is named in honor of the even older – long-gone – 19th century hotel called the Goodwin House. 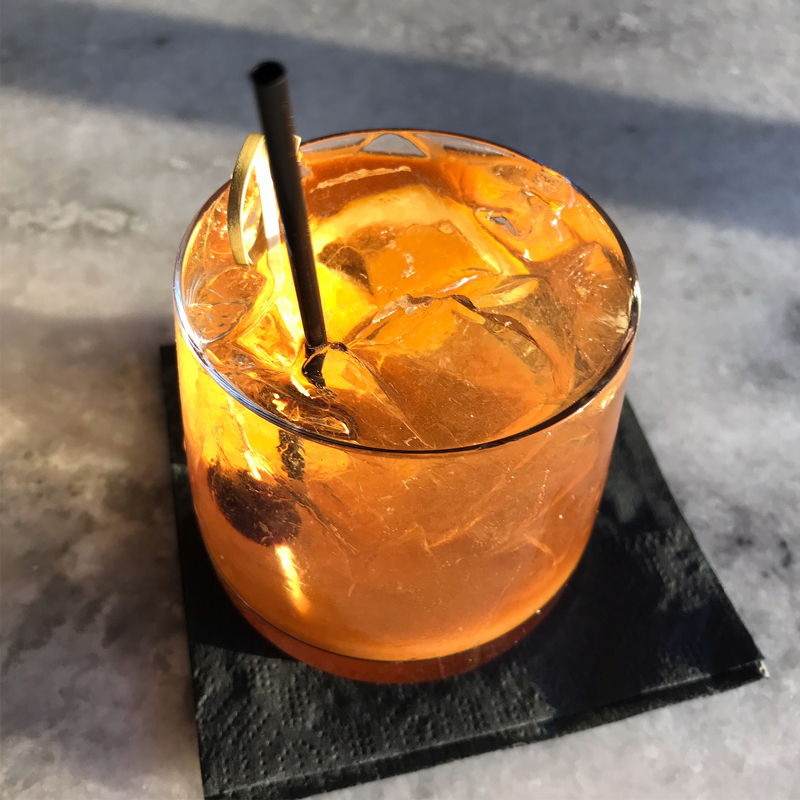 In the popular lobby restaurant, Velvet Buffalo – where inventive small plates and crispy pizzas rule – even the Old Fashioned is new, with sweet potato puree putting a different spin on the Luxardo cherry- and Scrappy orange bitters-laced cocktail.

Up in the sunlight-flooded rooms, there are turntables, pre-stocked with a few LPs and more available to guests. We ordered one at check-in and 15 minutes later, there was a knock on the door and a hotel staffer announced, "Beatles delivery." 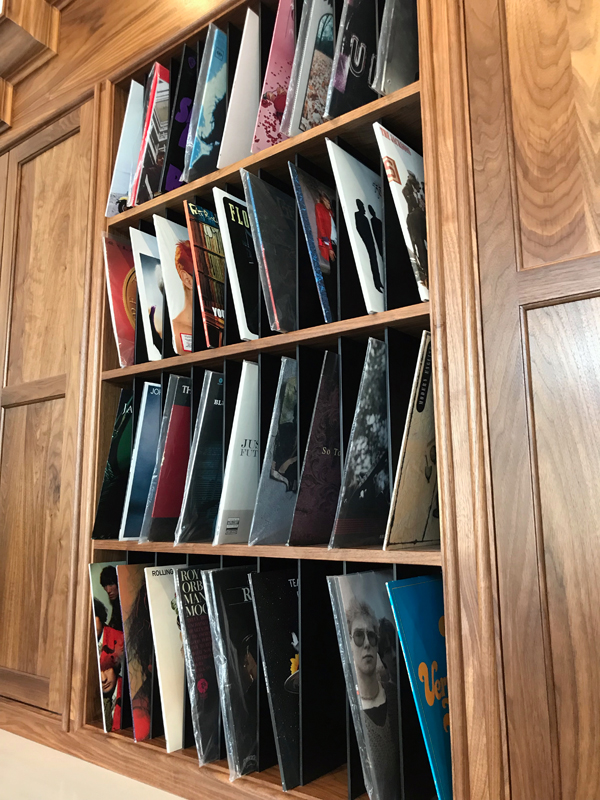 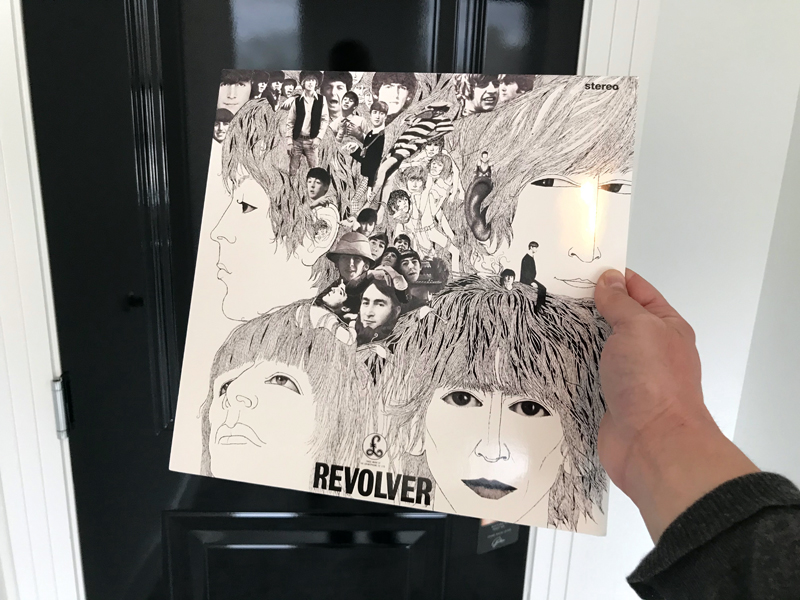 Perfect: a new reissue of an old rock and roll classic, spinning on a modern turntable. This, fellow travelers, is Beloit.

This industrial town on the rushing Rock River is a modest, no-nonsense place: home to Beloit College – founded in 1846, it's Wisconsin's oldest – and also the site of the state’s second-largest farmers market, which runs May ‘til October, and the 10-day Beloit International Film Festival.

On the weekend we visited, we sampled some "old" Beloit and some "new." 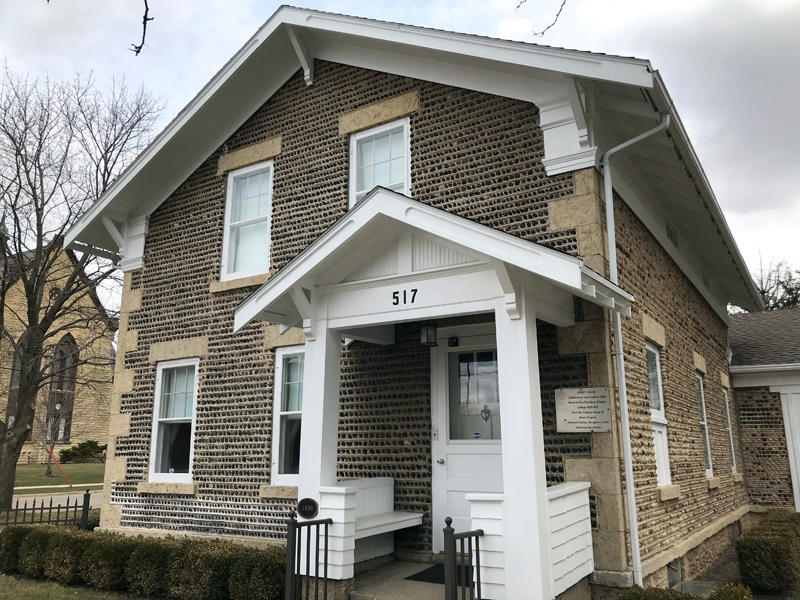 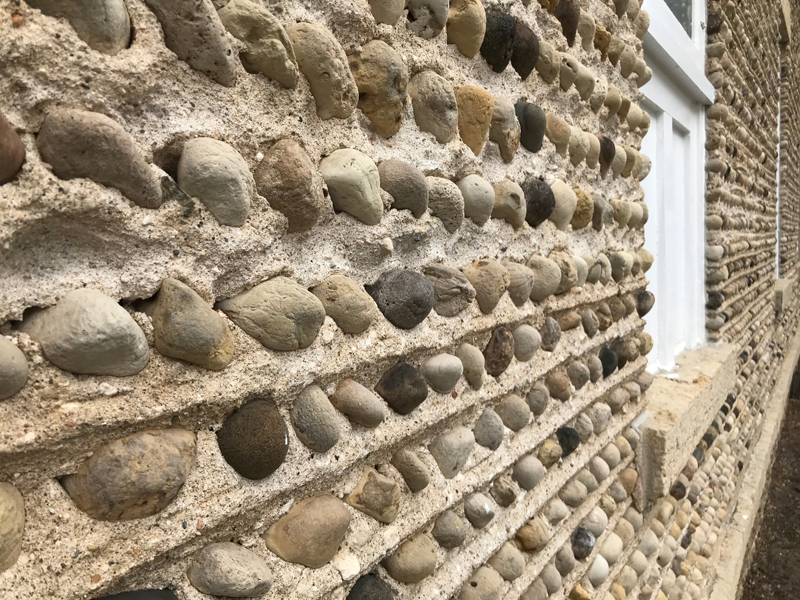 First order of business was to walk the two short blocks to Beloit College’s two museums, housed in interesting old campus buildings. On the way, we stopped to marvel at Rasey House, 517 Prospect St., built in 1850 as a residence for the first president of Beloit College.

The exterior of the so-called "cobblestone house" is completely covered in stones set in mortar, and its definitely worth an Instagram post, if you ask me. 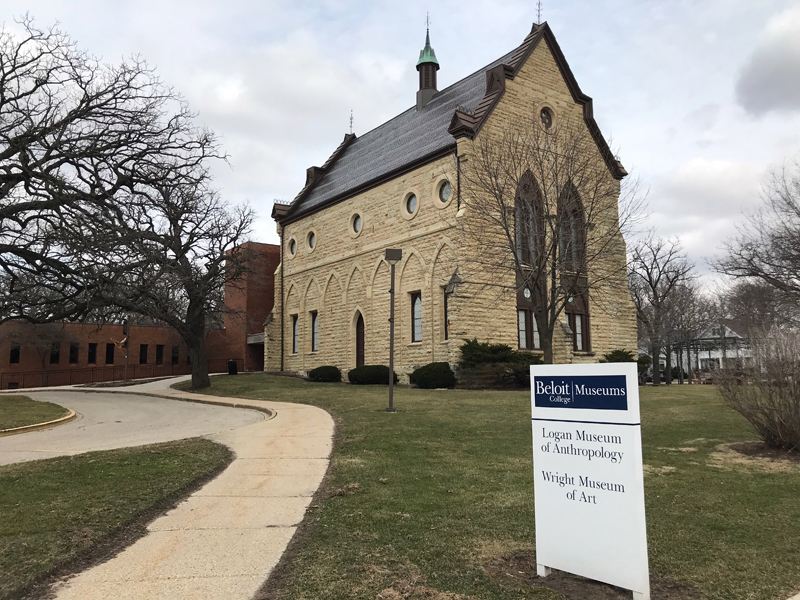 Across the street is the college’s 1867 Memorial Hall, which long served as the campus library but now houses the rather astonishingly stuffed Logan Museum of Anthropology, 700 College St., which boasts more than 300,000 objects collected around the world on display in its modern floor-to-ceiling "cube." 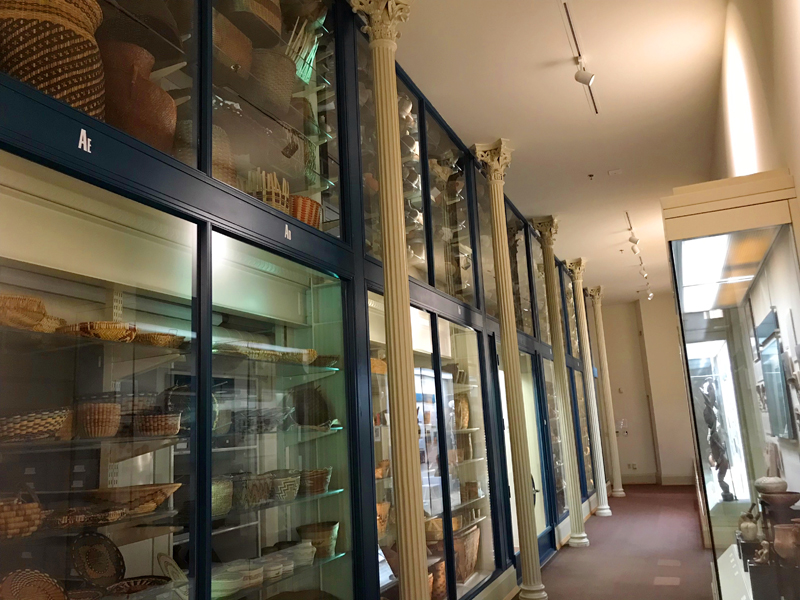 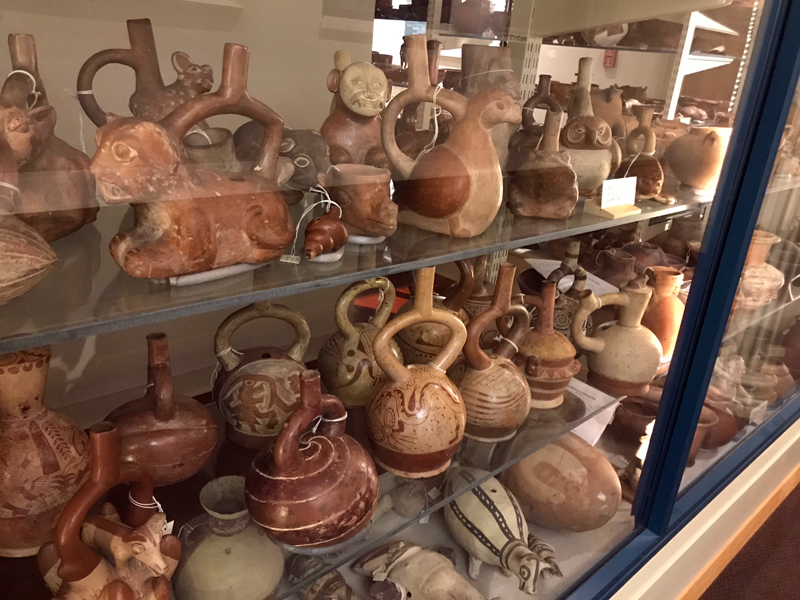 There are baskets and figures and masks and even a long dugout canoe – a Milwaukee address penned inside (I didn’t realize one could send an antique canoe through the mail) – from Asia, Africa, Mesoamerica, the United States and beyond, all in a space that feels as improbable as it does overwhelming ... and impressive.

Across the way is the Wright Museum of Art, housed in the 1929 Theodore Lyman Wright Art Hall, with its impressive skylight illuminating a top-floor artists’ studio, and four galleries where rotating exhibitions show work from the school’s collection of more than 5,000 works, including some by impressive names like Picasso, William Merritt Chase, Albrecht Durer and Fernando Botero. 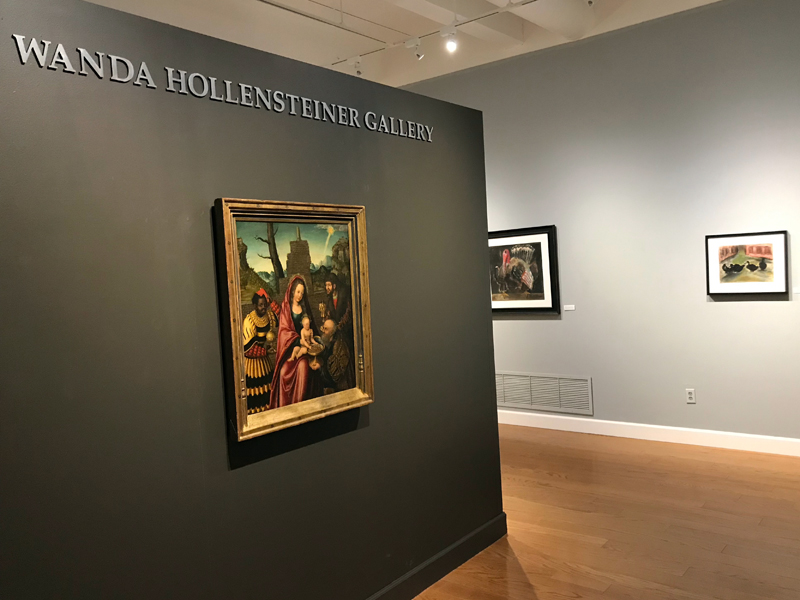 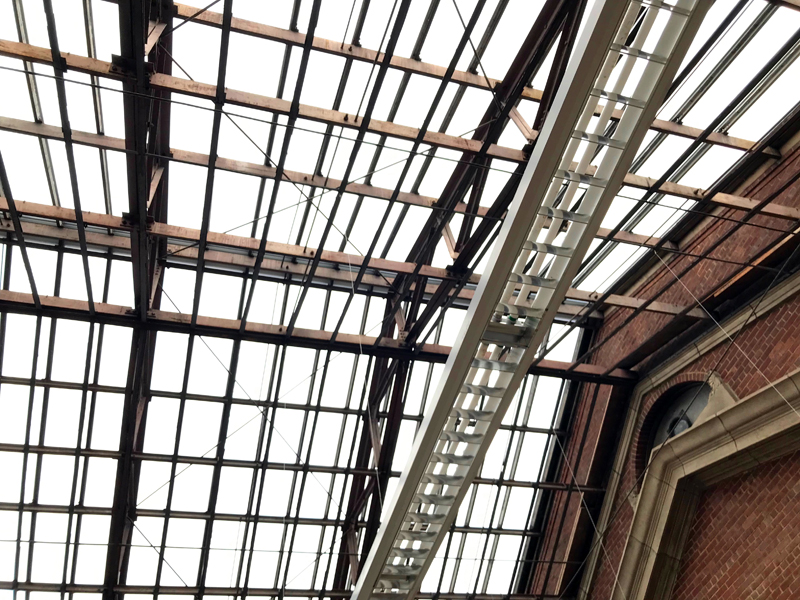 Admission to both museums is free and while you’re there, you’d be remiss if you didn’t explore, respectfully, the 20 surviving Native American burial mounds on the green campus. They are part of 15 mound groupings with 46 mounds scattered around the City of Beloit.

That there were more than 80 such mounds recorded in the city in the 19th century is a reminder that these must be preserved. The Logan Museum has an interesting series of panels and vetrines dedicated to this important heritage that dates back thousands of years. 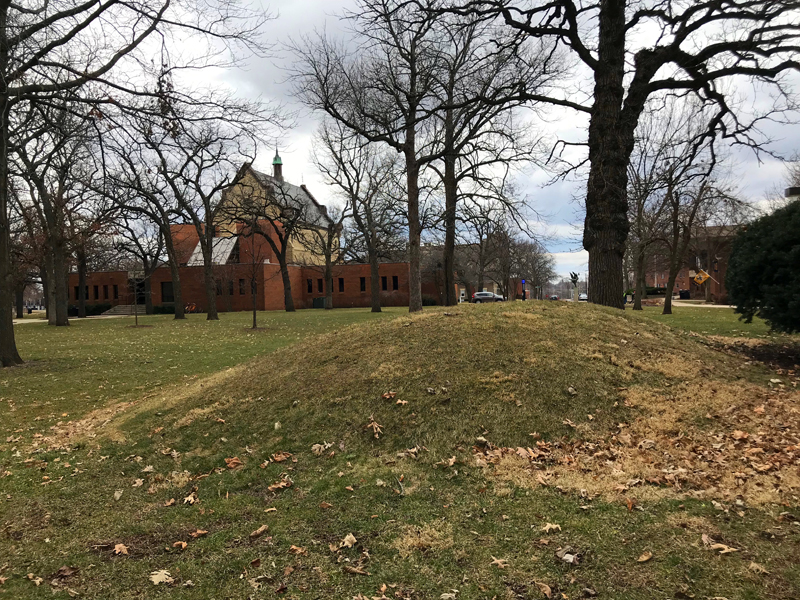 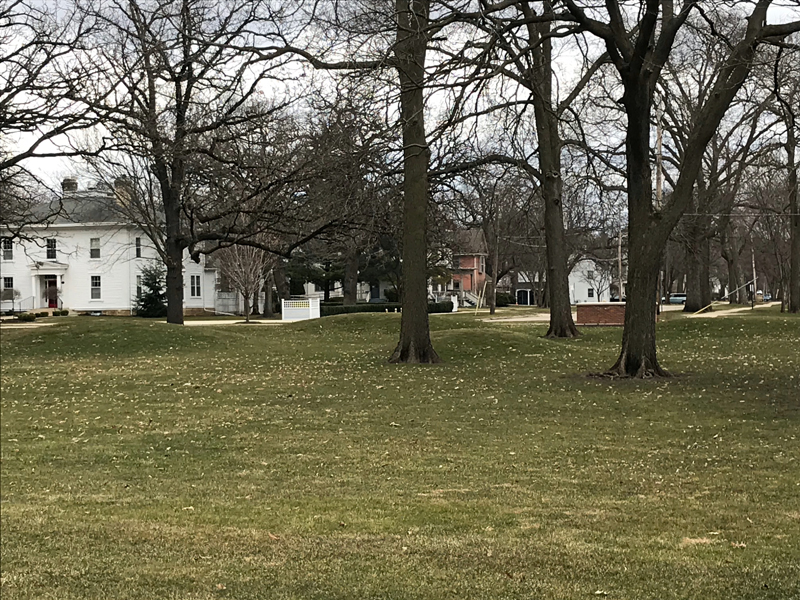 Back downtown, we lunch at Lucy’s #7, 430 E. Grand Ave., which is in full swing on a Saturday afternoon. Every table is occupied, each of the five televisions is showing a different sport and the atmosphere is alive, thanks also to the fervor of the open kitchen. 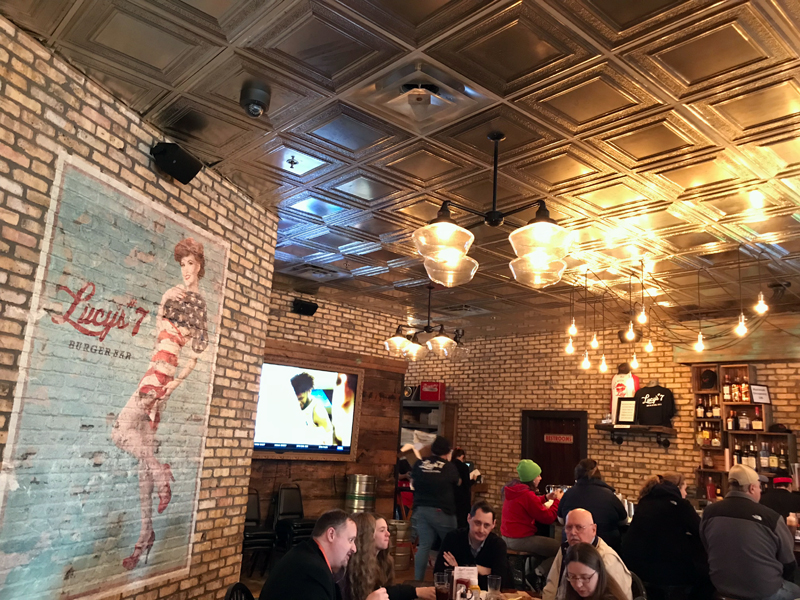 Here we grab some burgers and fries, a couple shakes and a malt, and settle in at a family-style hi-top bar. The littler ones get the cheeseburgers off the kids’ menu – which are unexpectedly large, frankly – and I can’t resist the Wisconsinite: a medium-well, cheddar-stuffed patty topped with fried onions, long slices of bratwurst and beer cheese.

It’s both heaven and hell on a single bun – delicious and wildly rich, especially when washed down with a chocolate malt. 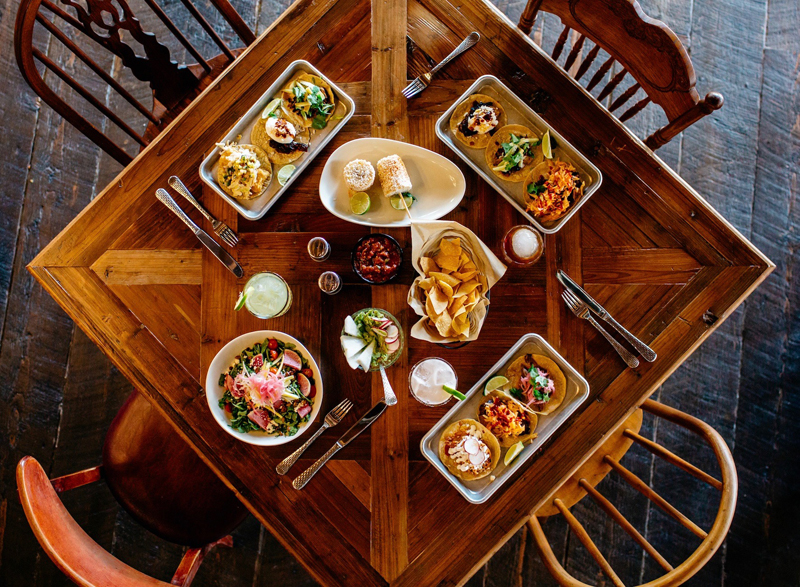 On the way back to the hotel, we pass Truk’t, 433 E. Grand Ave., which promises street tacos, tequila and whiskey and which is equally overflowing with diners. I make a mental note to put this at the top of the list when I return to town to check out G5 Brewing, the city’s first craft brewery, slated to open this year at 1895 Gateway Blvd. 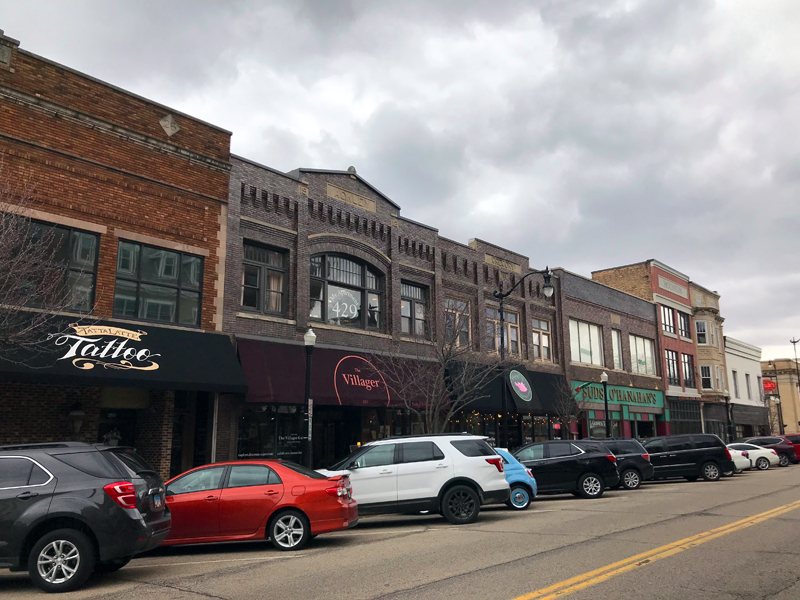 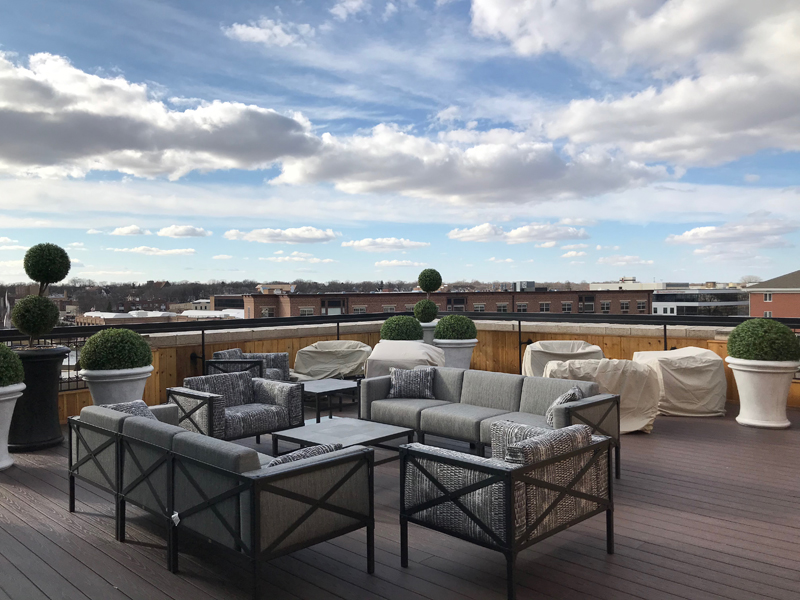 After a break, we do some exploring, walking around downtown and checking out the rooftop patio at the Goodwin, and, later, we find ourselves at Velvet Buffalo, which is jumping on a Saturday evening, every table and bar stool occupied.

We nosh on a margherita pizza; the fresh citrus, avocado and smoked trout salad – a new menu addition for spring; and a plate of perfectly medium rare flank steak atop a bed of sweet potato puree and boosted with a lightly poached egg. 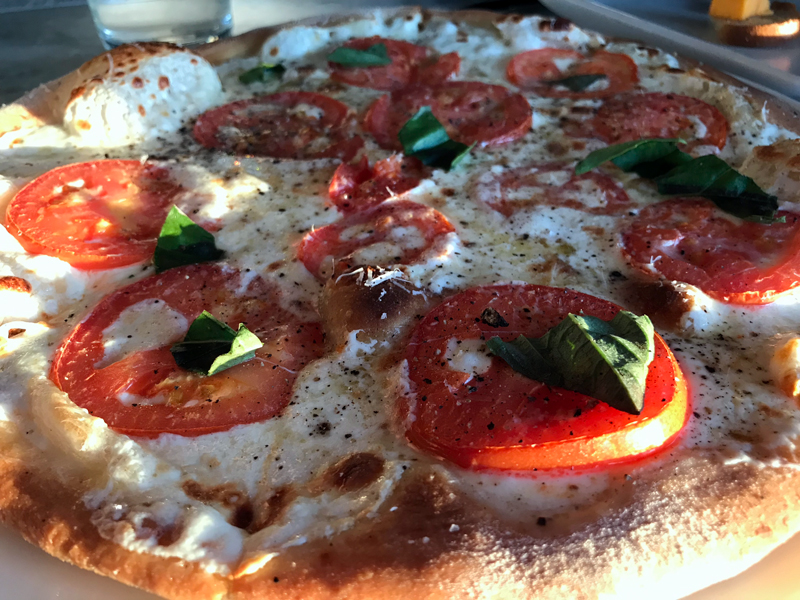 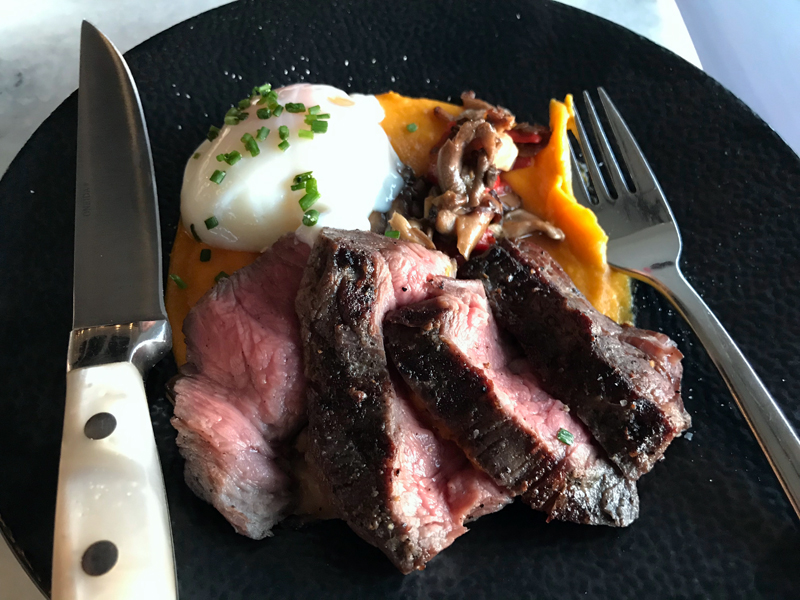 For dessert, a chocolate hazelnut banana torte that sounds like it was invented especially for me, and three spoons because lunch at Lucy’s is still fresh in our minds.

Later, we pass the Ironworks Hotel – a sister property to the Goodwin – and cross a modern footbridge over the rushing Rock River to swim in the pool at the modern Stateline Family YMCA, 501 3rd St., opened in 2017 in a former Beloit Iron Works factory complex that houses offices, a high-tech golf simulator and other businesses. 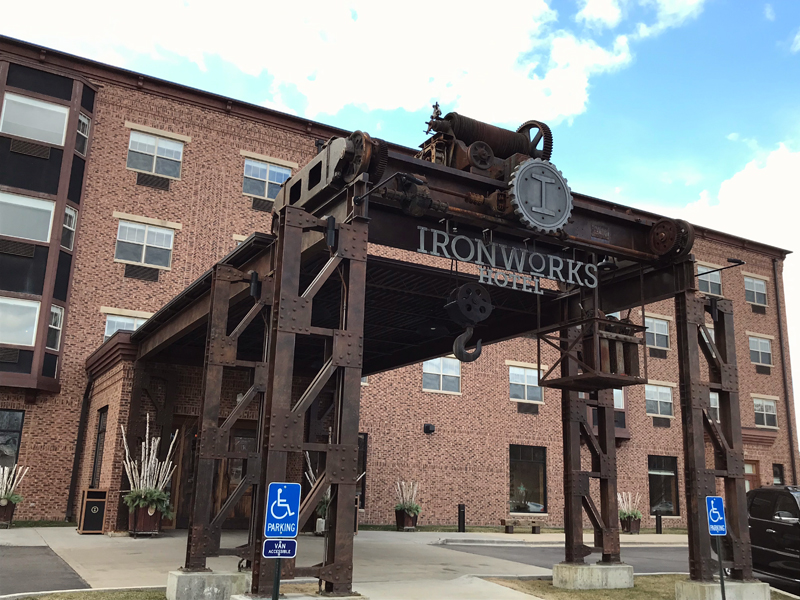 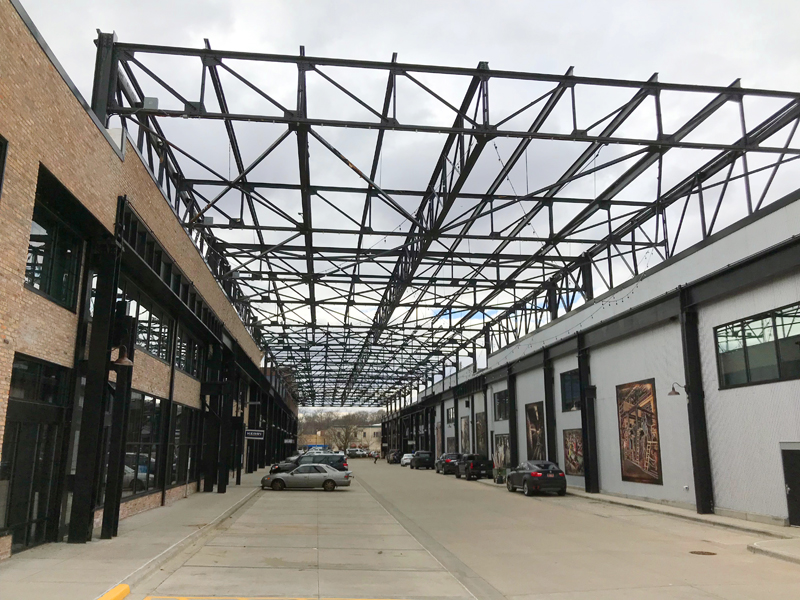 While the kids enjoy the activity pool, I settle in to beloiter in the whirlpool, where a local fires up a conversation.

"No gyms in Milwaukee," he asks with a chuckle.

When I tell him we’re just visiting, he says, "I guess we’ll get a lot more visitors when they build that casino they’re planning just outside town." 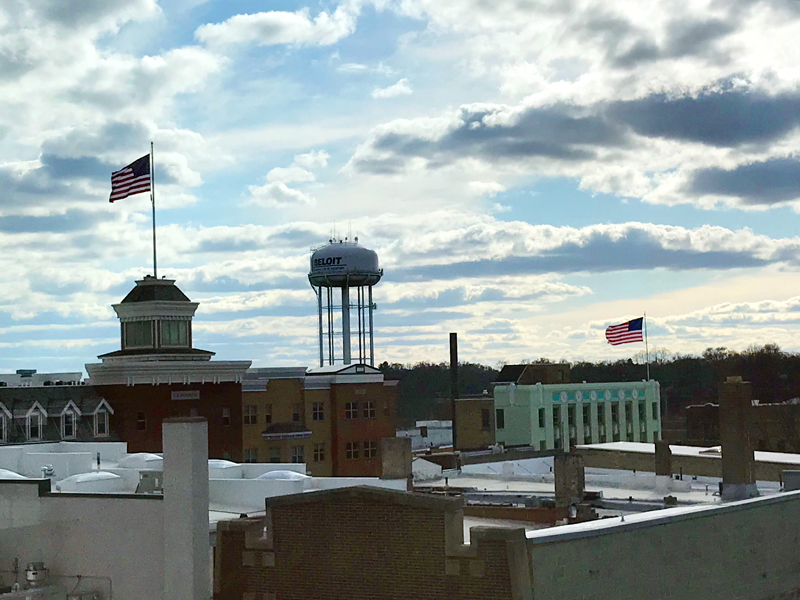 I ask what folks in Beloit think about that plan and he says, "depends on whether you ask the saints or the sinners."

Whether or not the casino will be popular locally, it will surely bring folks to Beloit, and the city – more than ever, perhaps – appears ready to welcome them.