9 Oscar night drinks based on the Best Picture nominees

Oscar night: an evening to celebrate the finest the film world had to offer over the past year, a night of glamour and prestige as Hollywood's most famous gather together, and - most importantly - an excuse to drink heavily on a Sunday night.

Oscar night: an evening to celebrate the finest the film world had to offer over the past year, a night of glamour and prestige as Hollywood's most famous gather together and, most importantly, an excuse to drink heavily on a Sunday night.

And what better way to drink down what's certain to be yet another six-hour march of montages and people mostly definitely NOT messing up the winners this time than imbibing some Best Picture-themed beverages? Here are nine tasty nominee-related refreshments perfectly matched with the big names of the night to help add to your Oscar party's fun – and to help wash away the memories of your awful ballot of predictions. (What do you mean "Baywatch" went home empty-handed!?)

"Call Me By Your Name"

Perhaps a peaches and cream drink would be more inappropriately appropriate for Luca Guadagnino's sweaty, sun-baked coming-of-age romance, but the Oscars are all about pretending to be classy, so let's go with a refreshing peach bellini instead. Better yet, considering it'll be a Sunday night and nobody wants to work that hard, it's an easy concoction to cook up. All you basically need is some peach puree and Prosecco – though, for a more thorough recipe, try out this version from Tablespoon.

Winston Churchill notoriously had more whisky than blood flowing through his veins. That's too obvious, though, so let's go with the Churchill martini ... also known as a glass of gin poured over ice. For the full experience, however, you'll need to glare at a bottle of unopened vermouth on the other side of the space – which is exactly how Oscar voters will treat this Best Picture nominee: invited into the room ... and that's all.

The great enemy in Christopher Nolan's magnificent, borderline-existential war movie "Dunkirk" isn't the German forces encroaching from all sides that you barely even see. It's the sense of dread and defeat that's already arrived – and the massive wall of salt water that's not going anywhere.

For an newbie to cocktail creations, salt water would also seemingly be the enemy of a tasty cocktail beverage (save for on the rim of a margarita) but as it turns out – and as chefs and bakers have known for eons – a little bit of salt can go a long way toward making the flavor of a beverage pop even more. Here's a short, smart explainer video from Cocktail Chemistry on the power of salt in drinks – plus how to make a saline solution to add to your sweet or sour Oscar night cocktails as a nice enhancing surprise. Kind of like when Harry Styles showed up in "Dunkirk" and was actually a good actor!

There's plenty of horrific imagery in Jordan Peele's outstanding directorial debut – no, not the Sunken Place but Allison Williams's villainess girlfriend snacking on Fruit Loops one by one while sipping a glass of milk out of a straw.

HAUNTING. And what better way to pay tribute on Oscar night to that terrifying tarnishing of breakfast food than with a Fruit Loops shot, a mix of Three Olives's Loopy vodka and Rumchata concocted by Spoon University. For a slightly grown up version, however, Rumchata itself created a "Loopy Fruits Shooter" combining the milky beverage, raspberry vodka and blue curaçao. No matter which version you make – or your own particular mix – it's a drink you'd vote for three times if you could.

I researched signature Sacramento drinks to no avail. (Prosecco-mento? Sacra-mint-o? You've disappointed me, state capital of California.) I tried remembering scenes from the film involving booze or food, but there's no boozy drinks involving Doritos that you'd want to consume yourself, much less give to friends and family – unless you're struck by the sudden urge to become a hermit. There was even a clip of Oscar-nominated star Saoirse Ronan talking about needing a drink before watching the movie for the first time ... but the drink itself went unnamed.

So I've resorted to doing what everyone else did when they first heard heard the title of this movie: assume it was about Lady Bird Johnson!

Luckily, the LBJ Presidential Library saved several of the former First Lady's Southern-rific recipes, ranging from "cheese wafers" to "Delma's cold chicken platter!" (The exclamation mark is official.) You could cook those up as well Sunday night, but of most interest for this article is Mrs. Lyndon B. Johnson's recipe for LBJ Ranch Spiced Tea, a mix of tea, limeade, orange juice, cinnamon and cloves. You could probably throw a splash of booze in there somehow, but our harrumphy heroine in "Lady Bird" isn't of drinking age, so maybe leave it as is.

Paul Thomas Anderson's swooning fashion romance is a feast for the senses – and surprisingly for the stomach, between designer Reynolds Woodcock's massive breakfast of choice to the asparagus of horrors to, most infamously, Alma's dangerously delicious mushroom dishes. So why not pay tribute to these foodie film with a mushroom-themed drink?

No, seriously; fungi refreshments are apparently a thing, including this Amadeus cocktail shared by Great British Chefs featuring porcini powder-infused sherry, "Amadeus" bitters and champagne. If you're scared off by that recipe – or simply by mushrooms after seeing "Phantom Thread," which fair – you could also try an old fashioned starring Reynolds's tea of choice: Lapsang Souchong. Concocted by The Cup of Life, this twist on an old classic mixes bourbon, honey syrup, the black tea and, of course, an orange or lemon garnish for a drink perfect for celebrating Oscar night, New Year's or a successful fashion show. Just make it quietly.

"The Shape of Water"

While the lazy pick here would be just simply some water – maybe a pitcher pulled straight from a local pond for accuracy – that's too easy (and I already did that for "Dunkirk"). So let's go a little deeper and go with a key lime pie martini.

There's plenty of variations online, from Mix That Drink to Genius Kitchen and more, but the overall recipe mixes together vanilla vodka, lime and pineapple juice, Coco Lopez cream of coconut, some heavy whipping cream and graham cracker crumbs for the rim of your glass. No matter which variation you choose to follow, you'll end up with a delectable dessert drink that'll easily put Dixie Doug's pie shop to shame – not that it shouldn't be already, those racist, Richard Jenkins-rejecting bastards.

The perfect mix to serve in conjunction with Martin McDonagh's fiery dark comedy about a mourning mother on a take-no-prisoners march for justice, Mildred's signature cocktail of choice is a simple recipe: half a bottle of some flammable liquid – booze, gasoline, it's your choice – with a liquor-dipped cloth sticking out to light on fire. It's a mix sure to warm up any crowd! 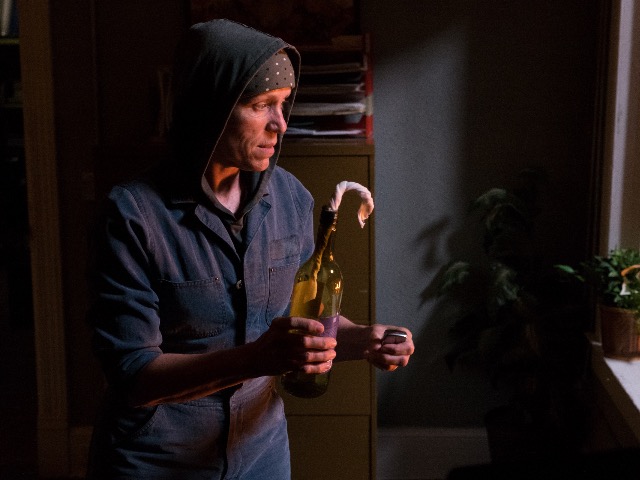 For something a little more drinkable and a little less LITERALLY incendiary, the fine people at Difford's Guide have a recipe for an actually palatable Molotov cocktail, featuring Giffard Parfait Amour Liqueur, vodka, black sambuca liqueur and some lemon juice. And voila! You've got a Molotov cocktail you can happily throw down without the fear for future arson charges!