Many of Milwaukee's favorite sports bars are located near a stadium, ballpark or arena, which contributes to their popularity as pre- and post-game hangout spots. But for the fourth year in a row, readers selected a place that is not, because it's just that good.

Many of Milwaukee’s favorite sports bars are located near a venue, which contributes to their popularity as pre- and post-game hangout spots. But for the fourth year in a row, readers selected Steny’s, the beloved Walker’s Point joint not proximate to any ballparks, stadiums, arenas or fields, as the city’s best sports bar.

Opened in 1985, Steny’s offers an extensive draft beer selection, more TVs than you can shake one of their delicious Bloody Mary garnishes at, convenient shuttles to Miller Park and the BMO Harris Bradley Center, and a fun-loving sports atmosphere for hard-core and casual fans alike.

OnMilwaukee editors' choice: Who's On Third

This year we also asked a variety of prominent Milwaukeeans to weigh in on their pick for specific categories. For this category, we consulted Drew Olson, host of "The Drew Olson Show" on The Big 920. 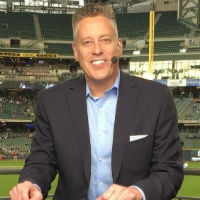 You’d think this would be a tough decision for me, because I like sports and I like bars. I was in grade school when I started visiting iconic Major Goolsby’s before Bucks/Marquette games Downtown with my dad. I’ve had many memorable nights at the "Brewers" bars on Bluemound Ave. But my absolute favorite, go-to spot before, during and after games is Leff’s.

A sports bar needs five things to be great: good cold beer (some establishments fail on this front), good food (wings and snacks a must), ample TVs with good viewing angles, smart customers (nobody likes to hang around a bunch of donkeys) and a friendly staff. Leff’s has those elements in spades and – most importantly – it’s relatively close to my house.

Leff’s is great for destination events like Badgers and Packers games and for casual drop-ins during weekday Bucks/Brewers/West Coast games. The State Street location directly across from Hart Park makes it a perfect spot for "tailgating" before high school football games and celebrating softball/kickball/volleyball victories. The patio offers the chance to hang out outside during nice weather.

I spend more time at Leff’s than any other establishment. In fact, I have friends that call it "Leff’s Living Room." It’s funny to get calls, "Meet me in the Living Room at 8." The owner, Chris Leffler, is a friend, and he named the joint after a Bruce Springsteen song, so that’s another reason I like it.