This weekend, after months of preparation and a seven-day installation process, Black Cat Alley officially opened to the public. One of the murals, a larger-than-life painting of an African-American man wearing an orange prison suit, has inspired passionate critique on social media.

This weekend, after months of preparation and a seven-day installation process, Black Cat Alley officially opened to the public.

The project features 14 murals by 16 artists in a two-block alley between the Oriental Theatre on Farwell Avenue and Colectivo Coffee on Prospect Avenue. The intention is for the outdoor gallery to brighten the dark, uninhabited space and to attract people to the area.

One of the murals, a larger-than-life painting of an African-American man wearing an orange prison suit, has inspired passionate critique on social media from other artists and community members who find the piece offensive and a reinforcement of stereotype.

"It’s often seen as the duty of the artist to agitate, draw attention to and interrogate the injustices of the world, shedding light on subjects in which the average person may never be directly affected. That’s important. However, there are times when this can cause more harm than good," artist and academic Kari Garon wrote on Facebook after viewing the mural on Sunday.

The artist, Adam Stoner, described his work on the Black Cat Alley website as a "mural (that) addresses Milwaukee’s painful legacy of incarcerating a higher percentage of black men than any other city."

Stoner, a Milwaukee artist originally from Charlotte, N.C., says the image is of a real person who is a friend of his and his wife’s.

"I am not going to name him because I don’t want him to get sucked in this, but he is a real person," says Stoner.

However, even though Stoner’s intentions were from a place of compassion and frustration over the penal system and Black Cat Alley's program director actually appreciates the piece, Garon believes the image is a symbol of oppression and it should be removed.

"When I look it at, I see another aggression. Marginalized populations don’t need a looming, permanent mark to remind them of their struggles, or even worse, to perpetuate both a stereotype and reality at the same time," says Garon. "I am overwhelmed with disappointment at witnessing another black body ‘displayed’ as socially ‘undesirable’ no matter what the intent." 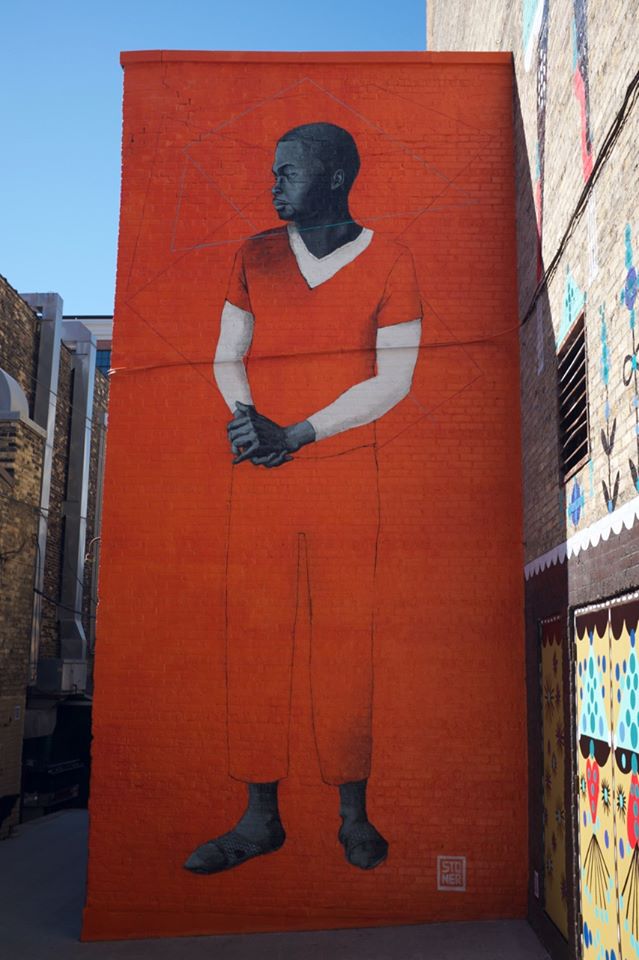 Garon says an artist has the right to create whatever they want in their private studios, but when an artist is contributing public art, a piece that will be viewed millions of times by millions of people over the years, the artist must be respectful and responsible.

"I do believe that an artist can make whatever in their own studio practice. However, a community is free to respond to that work. Also, I have large concerns about using community money to facilitate public work," says Garon. "'Education' should never come at the cost of the dignity of an already marginalized population."

Many people responded favorably to Garon’s post, shared it and wrote a version of their own.

"I find the image really problematic in the context that it is presented in," Nicolas Lampert, a Just Seeds artist, wrote on Facebook.  "There is no text to clearly state what the work is about. No text in the image itself. No description near the piece."

Within 24 hours, the conversation exploded on social media, and Stoner yesterday afternoon posted an explanation and an apology on Facebook.

"'Devontay' is a piece in a series I’ve been working on that considers mass incarceration and how we as white people disfigure the humanity of our black and brown brothers and sisters by projecting certain qualities onto them," wrote Stoner. "We paint judgments in flat colors without dimension; and that’s what I’ve done here, in the spirit of a sharp critique of our American systems."

Stoner also broached the possibility of painting over the mural.

"In the spirit of listening and learning, I want to invite the community to help me edit or change or paint over my piece if it has done damage to the cause. I can only imagine how painful it might be to look at an artifact of generations of oppression and segregation, day after day after day. I had not fully considered the very real traumatic correlations that my artwork might engender. This is magnified because it is public space; you can’t escape it," wrote Stoner.

OnMilwaukee talked with Stoner earlier today and he said he has already reached out to community organizers and plans to host a meeting and listening session on the East Side to explore the complexity of the image and figure out what the community would like him to do next.

"I want to humbly apologize and seek a solution from the community," says Stoner.

The fact Stoner is a white male made it more difficult for some to digest the image.

"I think that because the artist is white, an additional layer of complexity is added. This is largely due to the extensive history of oppression that we have yet to fully recognize and address," says Garon, who is Asian-American.

"I’m not black, and I had no intent to claim your experience, nor any ownership of it. Neither do I have any right or much human capital in the community to be a conduit for this conversation. I’ve been prepared, since day one, to turn this over to smarter, stronger voices than mine. We must give the floor to our black elders and leaders; their wisdom on the issue of mass incarceration will always trump my naïve white brush with it," he wrote.

Stoner says he is not surprised by the controversy of the mural.

"If there wasn't controversy over this piece that would mean it’s accepted as a norm and it is completely unacceptable that this image is normalized," he says. "This is not where we should be in Wisconsin – or anywhere."

Stacey Williams-Ng is the program director of the Black Cat Alley project and the facilitator of the jury who selected the artists. She says the mural is one of her favorites in the collection and that it elevated the project to another level.

"Because of his work, we were able to see this project rise above just being a fun community endeavor on private property, to being something so much more," says Williams-Ng. "I am so proud to have been able to give artists a forum like this to express their many voices in our city. This and other artworks in the alley have sparked a thousand conversations, and that's why art is so important."

Stoner ended his post – and his phone conversation with OnMilwaukee today – with a full-on apology and also confirmed his willingness to comply with public opinion in the future.

"But the jury is still out on whether this mural, Devontay, will be a tool for white conversation or an impediment to black hopes and black justice. If I set out to confront the casual white East Sider and ultimately undermined the true black voice, then the mural needs to change or go away," wrote Stoner. "I’m open to this conversation and happy folks are willing to have a conversation with me."