In honor of the Brewers home opener, here are some facts about the man we call Mr. Baseball.

Two of the greatest days every year for Milwaukee have combined into one day in 2022. This year 414 day and Opening Day are one in the same!  Let's raise one to Milwaukee, Home of the High Life.

Happy Brewers opening day, Milwaukee! And the only thing better than seeing the ball club back in action? Hearing the ball club back in action, courtesy of iconic Brewers radio voice Bob Uecker, back behind the microphone for another season. So, in honor of the always entertaining, always self-depreciating broadcaster and the start of another chapter in his remarkably colorful career, here are 17 quick facts that you may not know about Milwaukee’s very own "Mr. Baseball."

Before Jimmy Fallon, a guy named Johnny Carson hosted "The Tonight Show" – and he must've been a big Bob Uecker fan, because the broadcast legend was a guest of Carson's more than 100 times.

Right before "Mr. Belvedere" (see below) made its premiere, Uecker hosted "Saturday Night Live." Despite the all-star cast (including Martin Short, Billy Crystal, Harry Shearer, Christopher Guest and Julia Louis-Dreyfus) the episode is not considered one of the show's finest – but hey, at least nobody came dressed up like bottled water.

OK, maybe it looks less like dancing and more like starting a finicky chainsaw, but when you're Bob Uecker, you celebrate a playoff spot however you damn well please.

4. He’s the star of a great Milwaukee Admirals commercial

5. He’s in the Wisconsin Athletic Hall of Fame

Uecker starred in the TV series "Mr. Belvedere," which lasted for six seasons in the late '80s. British actor Christopher Hewett, who had the lead role in Mr. Belvedere from 1985 to '90, passed away this summer at age 80.

8. He has an awesome emoji

Milwaukee loves its emojis, and OnMilwaukee locamojis are a big hit. Here’s Bob’s: 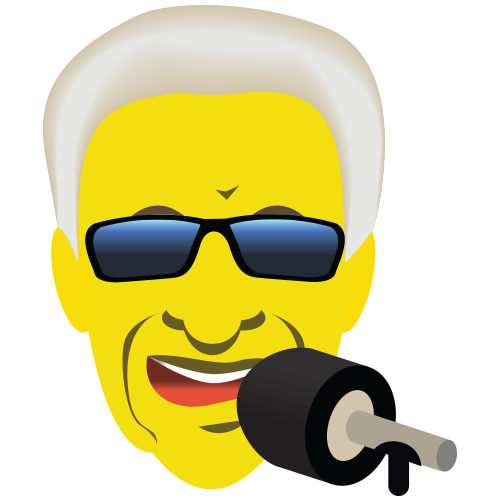 Tom Berenger, Charlie Sheen and Wesley Snipes may be at the top of the credits – and Milwaukee County Stadium gets to home field to our ragtag heroes – but Bob Uecker was definitely the star. His portrayal of sportscaster Harry Doyle in the movie "Major League" was easily the highlight of this classic 1989 sports movie.

Well, you already knew this one. Listen to a Brewers radio broadcast and you're guaranteed to hear a hilarious line. Here are just a few of Ueck's classics:

And it was pure comedy gold. No matter the sports, Uecker is a treat.

He starred in Miller Lite "All Stars" ads in the '70s and '80s in which Uecker would proclaim, "I must be in the front row!" – only to get sent to the cheap seats.

They're the best worst seats in all of baseball.

... with the Cardinals. Which tells you how great and wonderful of a personality he is that Milwaukee still whole-heartedly embraces him.

17. But he's gotta call one for the Brewers

Uecker called a World Series loss for the Brewers in 1982, but it only seems right to give him the ultimate winning call. And maybe this upcoming season is the time he gets it. Go Crew!