In addition to creating, maintaining and moderating the wildly popular Old Milwaukee group on Facebook, Milwaukee photographer and history buff Adam Levin has become a hunter of signs.

Last week, one of the signs Levin "captured" found a permanent new home. This one – in simple black and white – exclaims "Boston Store The Heart of Milwaukee." 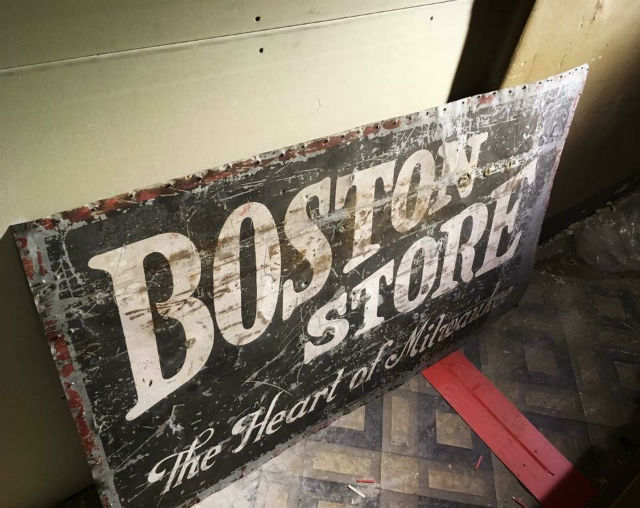 He’s long posted images of ghost signs (for which he’s created another Facebook group) and last year he helped return the classic Goldmann’s sign that long held sway over Mitchell Street to Milwaukee. (It currently remains in storage.)

So, when Levin, like the rest of us, heard that Boston Store would close all its stores, his yen for exploration kicked in and he sought an opportunity to get inside for a look.

"Bridget Griffith Evans, who worked on displays at Boston Store Downtown in the visual loft – where the props are stored – let me know there were Boston Store signs stored in the loft," Levin says. "She told me I could stop by and take a look at them, and she would give me a tour of the building."

While he was there, he discovered this gem, which was removed from the exterior of the building at 4th and Wisconsin during renovations in 1986 and had been stored inside for 30 years. 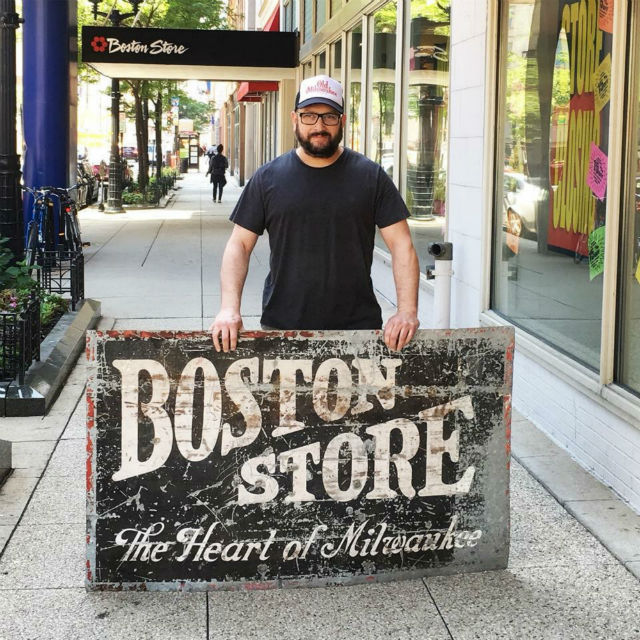 Setting his sights on the sign, Levin (pictured above) says, "I contacted the liquidator and after some wheeling and dealing, he sold the sign to me. But it wasn’t easy."

Key to those negotiations and the final purchase was Milwaukee-area professional rare coin dealer Andrew Kimmel, who picks up the story:

"When I first noticed Adam mention the sign on the Old Milwaukee Facebook page, I watched carefully to gauge members’ collective interest in preserving the piece and ensuring that it belongs to all of us," he recalls. "There was tremendous interest, but the dollar signs simply did not show up.

"For some reason the Boston Store sign resonated with me, so I wrote to Adam and offered my assistance. Once Adam began negotiating with the sellers, It became obvious that the situation required careful maneuvering – and perhaps playing hardball – to secure its acquisition."

After what Kimmel calls "complex negotiations," they were able to secure the sign in late June.

"They received tippy top dollar, so I suspect that everyone was pleased since obtaining the sign remained our only goal," says Kimmel.

"We are elated that over time, millions of people will enjoy, photograph and reminisce when viewing the sign. Best of all, Paul selected an utterly ideal display location perfectly suited for its context," says Kimmel.

"I am honored to participate in giving this piece of Milwaukee history to the people of Milwaukee. Something as important to Milwaukee’s history as Boston Store deserves to be part of our continuing community engagement and not vanish due to the inevitable march of internet commerce.

"All the credit goes to Adam Levin for his continuing commitment to document, celebrate and preserve Milwaukee’s rich heritage. Let’s follow Adam’s lead in our own way to make a positive difference to the community. You’ll find that it’s an honor and privilege to contribute."