I kid you not, the folks at Bounce Milwaukee, 2801 S. 5th Ct., have created a limited edition mock chicken leg pizza. And it's for a great cause.

If the response to my article about Milwaukee Public Schools’ mock chicken leg lunch – which has been offered by the district for decades – is any indicator, two things are clear:

Everyone either loves the mock chicken leg – made mostly with pork, there’s no chicken in it, hence the "mock" – and way more people love it than hate it.

With that in mind, the folks at Bounce Milwaukee, 2801 S. 5th Ct., have created a limited edition mock chicken leg pizza. 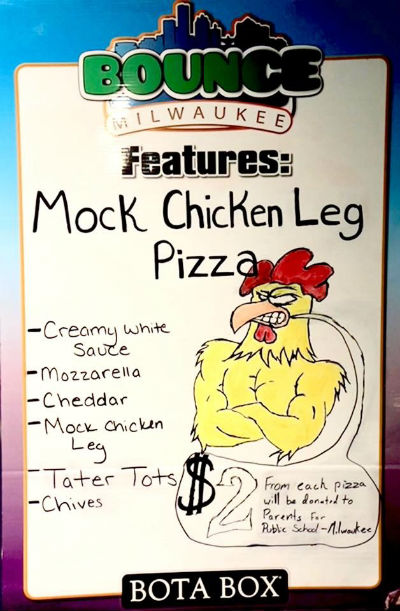 "As a former MPS teacher, I’m well aware of the sheer bliss that Mock Chicken Leg Day inspired in my students," said Clancy, who owns Bounce with his wife Becky Cooper-Clancy.

"I like to think that I was a pretty good teacher, but I had nothing which could compete with those. They’re also mostly unique to MPS, at least in the area. In conversation, you can generally pick out who went to, or worked in, an MPS school when you bring them up in conversation, so they seem to have become a matter of pride."

"It served the needs of our students extremely well, but enrollment suffered from non-instrumentality charters / voucher schools," Clancy says, adding that $2 from the sale of each mock chicken leg pizza will benefit Parents for Public Schools Milwaukee, which, as its name suggests, is a parent group that advocates for MPS specifically and public schools in general.

"It’s our own little shot across the bow in the struggle against school privatization," Clancy says.

"We’re always looking for ways to support our public schools, so we reached out to Jenni Hofschulte from Parents for Public Schools - Milwaukee to see if we could have sales from this support her organization, and she was thrilled."

Remember, I mentioned earlier, that not exactly everyone loves breaded mock chicken leg, which is, incidentally, also generally available in local grocery store meat sections, too. Some of those people work at Bounce.

"It took several days to convince our kitchen staff that this wasn’t an elaborate joke," Clancy admits. "The ones that had experienced the majesty of the mock chicken leg got it immediately, but we had a fair amount of employees who haven’t yet accepted the MCL into their lives, and needed to be converted."

Clancy says that although the pizza will likely have a limited run at Bounce, response in the first days of its appearance has been great. So, maybe it’ll be around for a while, or return periodically.

For the record, despite what Clancy has posted on Facebook, Clancy is not also creating a mock chicken leg cocktail, and naming it my honor.

"I wasn’t serious about the cocktail," he says now, backtracking, "though it might make for a unique bloody garnish."