This week on the swiftly whirling planet of local social media includes myriad posts about the new rules at Bradford Beach. Some folks are irate with aspects of the beach law, claiming it's too harsh and written to discourage low-income people from coming to the beachfront.

This week on the swiftly whirling planet of local social media includes myriad posts about the new rules at Bradford Beach. Some folks are irate with aspects of the beach law, claiming it's too harsh and written to discourage low-income people from coming to the beachfront. 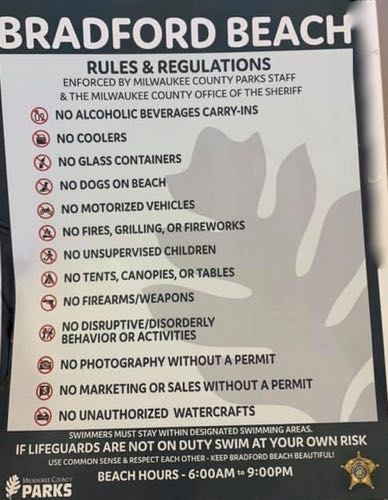 Ian Everett, marketing and communications manager for the Milwaukee County Parks, says the image was of a draft design, and the parks are working on a new design to clarify some of the rules.

"There is only one new rule this year. The 'no firearms' line has been removed as people with conceal carry permits are legally allowed to carry – the rest have been in place for years," says Everett.

"Coolers are OK, taking photos is fine, shade tents for kids are fine. The focus for enforcement will be on excessive drinking, underage drinking and disorderly conduct," says Everett. "Visitors are welcome to bring water or pop (editor's note: surely he means "soda") in a cooler, but not cases of beer, kegs, beer pong tables, grills, full-size tents or glass bottles – all of which have happened in the past."

Apparently, based on Everett's clarification, as long as the alcohol is not in a glass bottle or of frat-party proportions, it's legit to slip a beer or two in your cooler. Isn't that one of the reasons koozies were invented?

As for the line that reads "no photography without a permit" Everett emphasizes that casual phone or camera photos are fine, but permits are needed for professional photo shoots, video shoots and when photographers are looking to secure a space for their shoot.

"We often work with TV production companies who are looking to film at the beach, or large wedding photo setups. We even often waive permit fees if they're willing to share their photos / footage with parks," says Everett.

A new list of rules with the above clarification will soon be released.

In short, you can take selfies of your rockin' beach bod and, even if you've done it in the past, bringing large amounts of booze to the beach has never been legal.

Bradford Beach rules for summer of 2021