Bradford Beach rules for summer of 2021

Heading to Bradford Beach? Great, let's brush up on the rules.

When these rules emerged in 2019, they caused controversy after some Milwaukeeans were disgruntled by the vague alcohol regulations. (Alcoholic beverages of any kind are not permitted, but coolers with two non-alcoholic beverages per person are fine.) 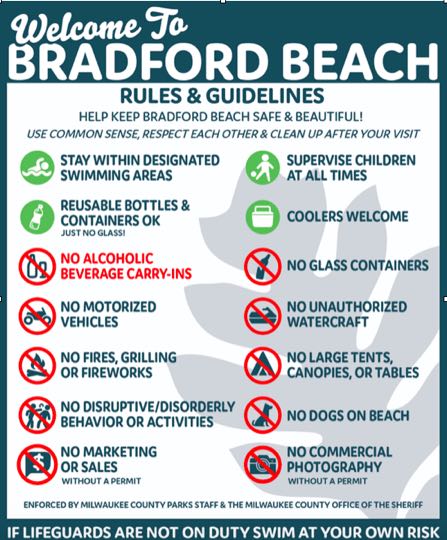 earms are also not allowed at Bradford.

However,  according to Ian Everett, marketing and communications manager for the Milwaukee County Parks, he rules have been in place for two years successfully, and therefore will remain the same this season.

"The vision for Bradford Beach is to ensure it's safe, clean and welcoming for everyone," says Everett. "We've worked to make the beach more accommodating for people in wheelchairs."