The BMO Harris Bradley Center will auction off sports- and music-related memorabilia it has collected over the course of its 30-year lifespan, including a pink paisley Fender Telecaster signed by Prince in 1997.

The BMO Harris Bradley Center will auction off sports- and music-related memorabilia it has collected over the course of its 30-year lifespan, including a pink paisley Fender Telecaster signed by Prince in 1997.

The items, which include autographed musical instruments, microphones, costumes, props, photographs and sports gear from concerts, family shows and sporting events held at the arena, will be offered for online bidding beginning Monday, June 4 at 10 a.m. at greatlakesauction.net.

The auction will close on Tuesday, June 12, with extended bidding offered on items that are in "active play" within five minutes of the auction close.

You can see previews of the items at the website now, though no bidding is yet allowed. 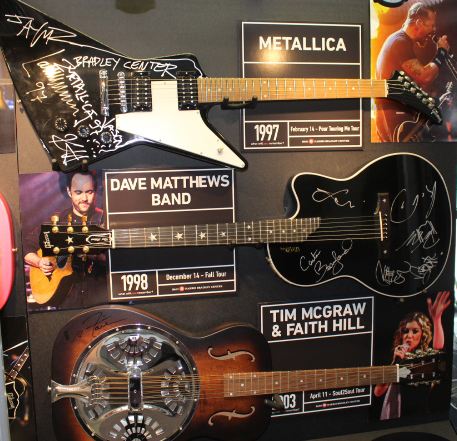 Here are some of the highlights:

The auction will not include any items from the Bradley Center structure, including seats. According to a press release, "The arena seats are considered part of the building structure and will be transferred with the building to the Wisconsin Center District when the Center closes permanently this summer. Most building equipment and furniture has been sold in large lots to direct buyers. Additionally, some memorabilia, along with the original building plans and other historically important artifacts and documents, will be transferred to the State Historical Society, the Milwaukee County Historical Society and the Milwaukee Public Library."

"As we come to the end of a remarkable run, it’s been amazing to look at all the memorabilia we’ve collected and relive 30 years of fantastic event memories," said Steve Costello, the Bradley Center’s president and CEO.

"This auction is a great way to share these memories with the public one last time. I encourage everyone to go online and take a look at everything there is to offer. This is your chance to own a piece of our community’s rich history."