Brett Eldredge's concert at the Riverside Theater Oct. 6 was the most elegant country concert I've seen. With a themed stage, props and even a guest animal - the show was enthralling to watch, sing along and dance to.

Brett Eldredge’s concert as a part of his "The Long Way Tour" at the Riverside Theater Oct. 6 was the most elegant country concert I’ve seen. With a themed stage, props and even a guest animal — the show was enthralling to watch, sing along and dance to.

At the start, LED screens on the backdrop of the stage, on the back of the piano and on two large rectangular shaped props were lit up to look like an old fashioned parlor. A recording, both audio and visual, showed on the back screen of Brett Eldredge singing a Frank Sinatra cover. Eldredge came out shortly after that and the audience was screaming. He started singing "The Reason" and got everyone swaying.

I had no clue how tall Eldredge actually was, until I saw him —  the 32-year-old man is 6 foot 4 inches. He looked like a superhero coming out on the top tier of the stage, towering over his band. He drank out of a large glass jug, contributing to the classy feel that was already started. 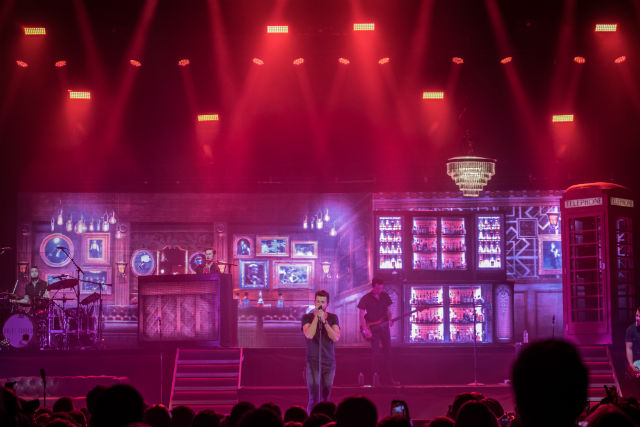 The prop crew was excellent. I felt like I was seeing a theatrical production, with breaks for the crew to bring out a new piece of furniture. For "Cycles" — which happens to be my favorite song by Eldredge, FYI — the prop crew brought out a large, brown leather couch that Eldredge sat in. The lights were dark all around him except for the two spotlights, shining on him as he sang. It was a very intimate feeling for a song about getting back with a former lover, which fit perfectly.

Eldredge, a Paris, Illinois, native and an Elmhurst College (in Elmhurst, Illinois) graduate, gave a shout out to the Packers and said he has been coming to Milwaukee for years. Which makes perfect sense; when your home state football team sucks, of course you’d be travelling to the state with the superior team.

The LED screens behind Eldredge changed frequently, and were set to a mountain landscape for "No Stopping You." The slow pace of the song matched the serene background of the mountain range.

As the prop crew brought out a queen size bed on stage, Eldredge’s Etta James cover of "At Last" played through the screen, which slowly morphed into scenes from outer space. And then, something I’d never witnessed at a concert before happened: Eldredge brought out his dog! I’d seen Edgar, a Weimaraner/Vizsla mix, in videos on Eldredge’s Facebook page before, and have loved seeing him sing duets with his dog. It warmed my heart to see he had brought his two-year-old dog with him on tour. You could really see "man’s best friend" coming into play here. Eldredge even had Edgar do a little trick; he ate a treat off his nose.

After that cute little show, Eldredge said they were ready to boogie. However, the next song was not lively and boogie-worthy. Not complaining though, because it was an acoustic version of perhaps his most famous song, "Mean To Me." The audience sang along to every word, and the last note at the end rang out around the Riverside theater, leaving an awesome effect.

Another Eldredge favorite of mine, "The Long Way," was an emotional performance. The singer brought a couple from the audience on stage to slow dance while he sang, which increased the cuteness factor. For "Lose My Mind," Eldredge just looked so happy. I wasn’t sure what picture was on the background screen this time — it looked somewhat like an urban setting with tall buildings, but they kept morphing into other shapes.

Eldredge’s happy factor went up even more at the end of "Wanna Be That Song." He leaned back after the last note, running his hands through his (very sweaty) hair, and smiled so hard, looking up at the ceiling.

I was surprised when he brought out the two opening acts, Abby Anderson and Devin Dawson, to do the "Crazy" cover. Eldredge said this was the first time they’d done that song, but I couldn’t tell. It sounded well rehearsed and they harmonized flawlessly. At the end, Dawson gave Eldredge a huge hug, running and jumping into his arms.

For "Time Well Spent," despite the colder temperatures, a beach setting was brought to Milwaukee for a few minutes. A beach ball was tossed into the audience to hit back and forth, the background LED was island-themed and the audience energy was so high. Eldredge said "Cheers for an incredible crowd tonight," after, unsurprisingly. He later asked if we were ready to fall in love tonight and then sang "Beat Of The Music." Although when he asked, I was already in love, with the concert.

The brown couch came back for his encore song, "I Got A Woman." He lied on it when he began to sing, taking a much needed break. 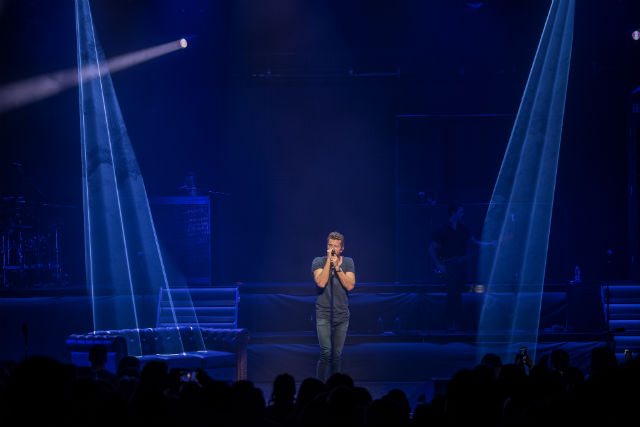 By the time he was singing "Drunk On Your Love," I could tell by the way that he sang that he was tired. I still loved every word, but some notes sounded a little off-key and there were longer pauses in between words. It was a great concert, and I highly enjoyed every minute of it, but I was glad it ended when it did, so poor Eldredge could get a rest.