5 things to watch during the Brewers' push for the playoffs

"You can't predict baseball" is an old truism that conveys the variable, seemingly random nature of the game, and its veracity was evident this weekend during Milwaukee's surprising series sweep down in Chicago. As the upstart Brewers push for the playoffs, here are five things to watch.

"You can’t predict baseball" is an old and oft-uttered truism that conveys the variable, sometimes seemingly random nature of the game, and its veracity was evident this weekend during upstart Milwaukee’s surprising series sweep down in Chicago.

Over the previous two weeks, the erratic Brewers had won two of three games on the road against the MLB-best Dodgers, split a pair at home against the playoff-pushing Cardinals and taken three of four from the NL East-leading Nationals at Miller Park. Seven games over .500 and riding a wave of momentum, Milwaukee promptly lost all three games in Cincinnati to the cellar-dwelling Reds, negating the Brewers’ progress and putting them back to third place in the NL Central, as they headed into a daunting road series against the division-leading Cubs.

The Brewers, who heading into the weekend had tallied the fewest runs on the fewest hits in the major leagues since the All-Star Break, outscored the Cubs, 20-3, in three games, including a 15-run explosion on Saturday. A Milwaukee pitching staff (and defense) that had allowed 21 runs to the Reds suddenly shut down baseball’s best second-half offense, with three sterling starts and strong relief work. The Brewers totaled 21 hits, had a team ERA of 1.00, didn’t commit an error and trailed for just two of 27 innings over the weekend. They improved to 75-68 and moved to within two games of the Cubs in the NL Central standings and three games back of the Colorado Rockies in the Wild Card race.

It was a dominant display, certainly, and a statement series – if they can keep playing well – that gives the club and its fans renewed hope. Starting tonight, Milwaukee hosts the Pirates for three crucial games. The team then hits the road, traveling to Miami (or possibly a neutral location, because of Hurricane Irma) for three contests against the Marlins and then three in Pittsburgh. On Sept. 21, the Brewers will return to Miller Park for a seven-game homestand, four against the Cubs and three versus the Reds. They close the regular season with three games at St. Louis in what could be a last-gasp, playoff-deciding series.

After beating Chicago, earning his major league-best 17th win Sunday and reviving the NL Central race, starter Zach Davies said, "It’s going to be a fun September." He’s right, hopefully. Hold onto your hats – or just put them on your head – it’s going to be an exciting three weeks.

Here are five things to watch over the Brewers’ final 19 games: 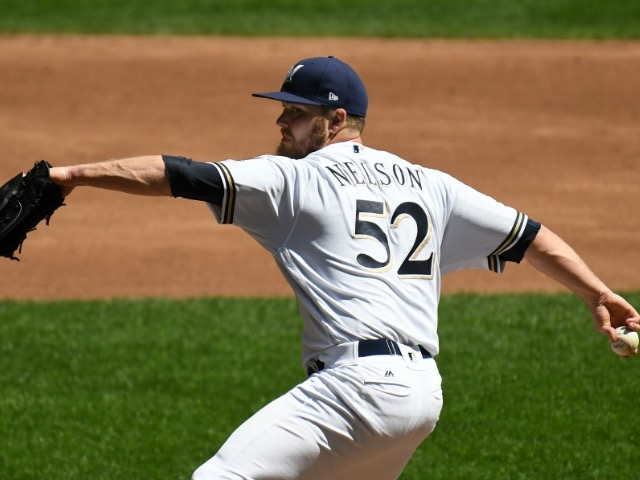 The Brewers’ sweep of the Cubs did not come without a price, as they lost ace-ish starter Jimmy Nelson for the remainder of the season due to a shoulder injury suffered sliding back into first base on Friday. Nelson, who was having a career year at 12-6 with a Brewers-best 3.49 ERA and a team-high 199 strikeouts, has a right rotator cuff strain and partial anterior labrum tear, which could require surgery.

Nelson was set to take the ball Wednesday against the Pirates, and he also was scheduled to make three more starts the rest of the way. How will Milwaukee cover the reliable righty’s innings?

As they’ve done a couple of times recently, the Brewers could make Wednesday a bullpen game, with Matt Garza (shudder), Junior Guerra or someone else giving them a few initial innings, and multiple relievers pitching in to get through the rest of the game. Or, with an extra roster spot after Nelson is placed on the disabled list, Milwaukee could call up a starter from the minors. The two most likely candidates would be Taylor Jungmann, who has big-league experience and had a good season at Triple-A Colorado Springs, or Double-A Biloxi right-hander Aaron Wilkerson. 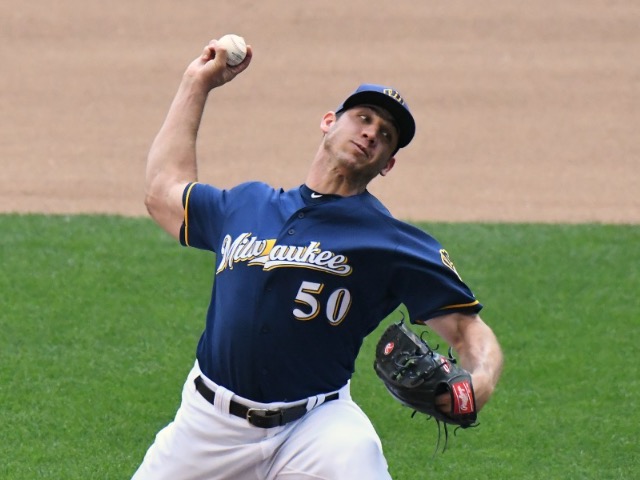 Milwaukee’s relievers have pitched the eighth-most innings in the majors so far this season (492) and the second-most among potential playoff teams. The Brewers’ bullpen ERA of 4.08 ranks 13th, and they’re tied for the most saves in the big leagues with 49.

Highly touted 23-year-old Josh Hader showed some signs of wearing down last week, giving up three runs and taking two losses in five days. With 36.1 innings under his belt in 2017, his workload has been well-managed, but the hard-thrower has looked slightly less invincible recently. Righty Jacob Barnes, too, has struggled of late, giving up six runs and five walks in his last 5.1 innings.

Remarkably, All-Star closer Corey Knebel has continued his excellent season, having allowed just one run on six hits with 15 strikeouts and only three walks in his last 10 outings, notching nine saves. With an inexperienced bullpen made up of young pitchers and converted starters, and especially given the added stress after the Nelson injury, the Brewers will need smart management, a little luck and lots of big performances down the stretch. 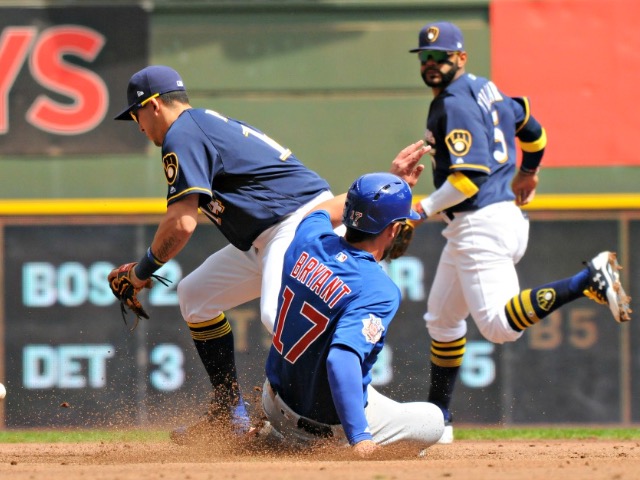 Players and managers always deny the human tendency to scoreboard-watch at the end of the season – "we’re just worried about controlling what we can control," they say, "and we’ll let everything else take care of itself." Yeah, right. With Milwaukee in the thick of both the divisional and Wild Card playoff races, you can bet the Brewers will be glancing at the results of the other three teams they’re competing against for a spot – the Cubs, Cardinals and Rockies.

According to various media outlets, Milwaukee’s current odds to make the postseason are 22.9 percent (Baseball Prospectus), 14.0 percent (FanGraphs) and 22.0 percent (Five Thirty Eight). But, encouragingly, the Brewers have the softest schedule remaining (.489) – besides Arizona, which has already all but clinched the first Wild Card spot – with 12 of their last 19 games against sub-.500 teams, plus the Cubs at home. Chicago has the most difficult strength of schedule (.498), followed by St. Louis (.493) and then Colorado (.492).

As evidenced by the nine-point difference, not much separates these teams, so their series against each other will have major impact. Make sure to tune into the Brewers' potentially make-or-break series against the Cubs (Sept. 21-24) and Cardinals (Sept. 29-Oct. 1). 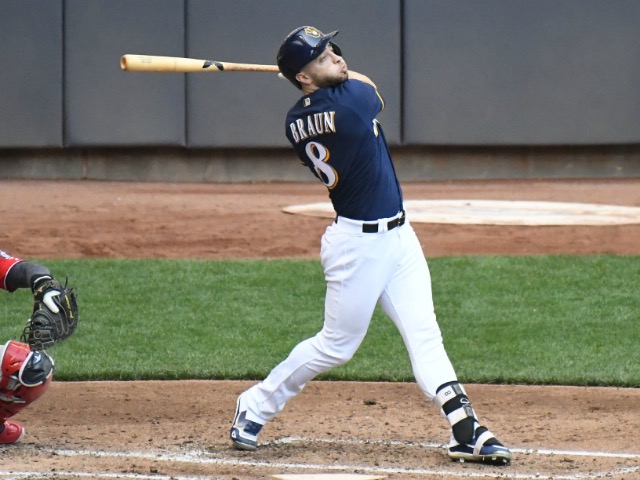 As noted above, before this past weekend, the Brewers were last in MLB in hits and runs, as well as near the bottom in most other batting categories, since the All-Star Break. They’ve averaged just 3.8 runs per game in the second half, and their 80 wRC+ (Weighted Runs Created, an advanced metric that tries to quantify total offensive value) is the worst in the league.

Besides their improved pitching, the only reason Milwaukee is still hanging around the playoff race is because of its power and speed. The club is second in the National League in both home runs (202) and stolen bases (111). Third baseman Travis Shaw has been a punisher at the plate, leading the Brewers in batting average (.277), home runs (29) and RBI (90). Three other players have hit at least 20 home runs and nine have at least 10. Six Brewers have stolen at least 10 bases, led by Jonathan Villar’s 23. No doubt, Milwaukee could use an offensive outburst from notoriously streaky center fielder Keon Broxton (20 homers, 19 RBI this season).

The series against the Cubs was promising because the Brewers scored their 20 runs with only three homers. Hitting just three doubles, Milwaukee used 15 singles, 16 walks and typically aggressive base-running to small-ball manufacture some big offense. Will we see more of that? 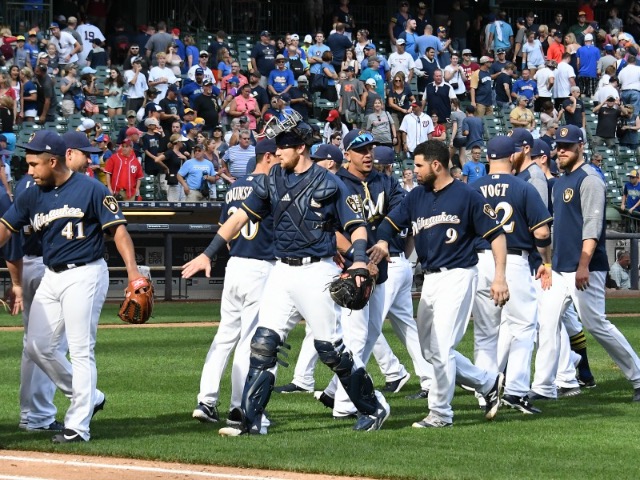 We’ve said it all season. The 2017 team, constructed by general manager David Stearns using spare parts, castoff veterans and lots of young players with raw talent, probably wasn’t supposed to compete for a playoff spot this year. Surely, few people outside the organization expected a winning season this soon during a large-scale rebuild that has the club projected to be very good in a couple years.

But that lack of pressure has created an atmosphere in which the players are more relaxed, having fun, trusting their natural ability and not feeling despondent as they go through the ups and downs of a long baseball season. Guys like Eric Thames, Orlando Arcia, Broxton and Knebel have had success while also having fun, producing an exciting group that fans want to cheer for.

You can’t predict baseball, and you definitely can’t predict these Brewers. But one thing is for certain: These last few weeks of the 2017 regular season are going to be wild, and you’ll want to be watching, Milwaukee.