Step up your gear game: 7 ways to diversify your Brewers wardrobe

How often do you go to a Brewers game and see the same old Ryan Braun T-shirts and outdated jerseys of players no longer on the team? Too often. We want to help you not only update your Brew Crew wardrobe, but diversify it with some cool, unique items.

How often do you go to a Milwaukee Brewers game and see the same old Ryan Braun T-shirts, outdated jerseys of players no longer on the club and apparel that doesn’t even relate to the two teams playing in Miller Park that day? All too often.

Well, we want to help you not only update your Brew Crew wardrobe, but diversify it with some cool, unique items. Check out these six clothing options and stand out from all the other boring shirtseys you’ll see this summer.

This shirt allows you to make a compelling political statement while wearing the words "ding dong." I’m sold. After a breakout 2017 season with 31 home runs and 101 RBI, Travis Shaw, nicknamed "the mayor of ding dong city," is seeking re-election in his 2018 campaign.

He’s well on his way with a .291 average, five home runs, and 13 RBI in just 86 at bats this year. But an election victory is never a home run(sorry), so go cast your vote and support your favorite baseball mayor with this excellent t-shirt.

It’s no secret that Eric Thames is a fan of beer. Whether Thames is helping MillerCoors brewmasters create a specialty beer,or crediting his early-season success to some good ol’ Miller Lites, he fits right in with Milwaukee’s historic passion for the suds.

What better way to support our brawny, beer-drinking first baseman than with a shirt that shows off his burly muscles and love of brews? It just makes sense. For the full Thames effect, get an extra-small (and spend the next two years working out). 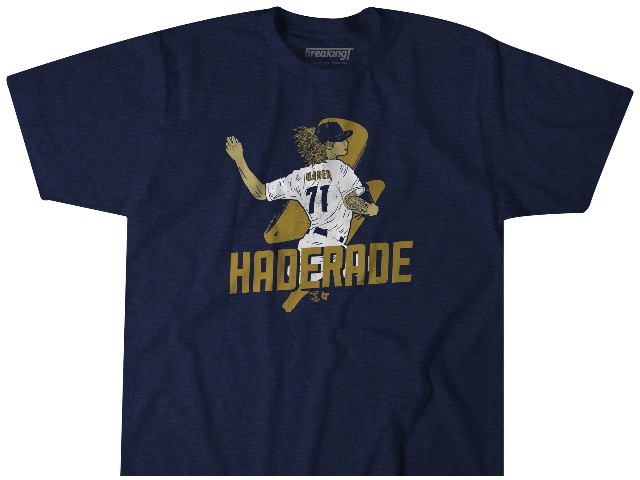 You know a pitcher is good when fans are calling for him to be used every day in any capacity. Use him as a starter! No, a closer! Keep him where he is as a high-leverage reliever! Regardless of how Milwaukee utilizes its standout lefty, Josh Hader delivers strikeouts. He has already struck out an incredible 29 batters in just 14.2 innings this season.

So if you haven’t already, now’s a good time to jump on the Haderade bandwagon. This shirt features the great "Haderade" nickname in big gold letters across the shirt, his luxuriant locks blowing in the breeze and even that thing he does with his lips when he throws the ball. That’s the kind of attention to detail appreciated by true diehard Brewers fans.

Now, there are a few different Eric Sogard nerd power shirts on the market, but this one is our favorite. It’s simple, yet versatile. The four hashtags encompass a lot of the shirts on the market, including a pair of glasses (which is pretty great) and even features fellow Milwaukee athlete Giannis Antetokounmpo with its play on the Greek Freak. Bonus points for that.

The offseason additions of outfielders Lorenzo Cain and Christian Yelich sent a strong message not only to Brewers fans, but all of Major League Baseball: the Chicago Cubs and St. Louis Cardinals are going to have some competition for the National League Central Division for years to come.

This confidently optimistic shirt features the phrase "The Rebuild is Over" in yellow with the names Cain and Yelich on crossing bats behind it. Now I’m not saying that Milwaukee’s rebuild is in fact over; I’m just saying the Brewers are probably going to the World Series this year, and if you agree with me you’ll buy the shirt, that’s all.

Let’s say you’re more of a casual baseball fan. You go for the tailgating, the company of family and friends, for all the fun and festivities of a game at Miller Park. No problem, we’ve got you covered.

Baseball fan or not, a staple of Brewers games is always the world-famous sausage race. Instead of supporting a player, why not support your favorite sausage? Even though the chorizo (my favorite) is featured here, the site offers all five sausages on sweatshirts or T-shirts.

You can get plenty of stuff online, but Moda 3, 320 E. Buffalo St. in the Third Ward, is an actual store – that just underwent a renovation – where you can browse around and try on some cool threads.

To wow your friends at the tailgate and really put the fashionable finishing touches on your game-day outfit, you need Brewers socks – either of these designs featuring the team’s iconic ball and glove logo. And, for those classic Milwaukee games when it’s 45 degrees out, this large, hockey-style Brewers lacer hoodie will keep you warm and conceal all the hot dogs and beer you’ve had in style.

And, of course, there’s always the Brewers Team Store, which also this year underwent a renovation and now sells more than 200 different caps, as well as baby clothes, an expanded women's selection and plenty of Hank the Dog items.