Just days after it was announced that one Wisconsin company's name would be added to the Milwaukee Brewers' stadium, the team has unveiled a unique partnership with another notable Badger State business.

Just days after it was announced that one Wisconsin company’s name would be added to the Milwaukee Brewers’ stadium, the team has unveiled a unique partnership with another notable Badger State business.

Beginning this coming season, the Brewers will team with Racine-based SC Johnson to turn the more than one million plastic cups you use at the ballpark into new bottles for SC Johnson’s iconic Scrubbing Bubbles cleaning product.

The cups will be collected in special receptacles that will keep them separate from other waste (please do your best not to contaminate the containers with other trash) and SC Johnson will collect the cups and recycle them into new-use containers.

According to the Brewers, this is the first time a U.S. professional sports team is closing the recycling loop by partnering to convert its waste into a specific product.

The team notes that a lack of buyers for used plastic is one of the biggest hurdles in recycling. A mere 13 percent of plastic packaging is actually recycled in this country. 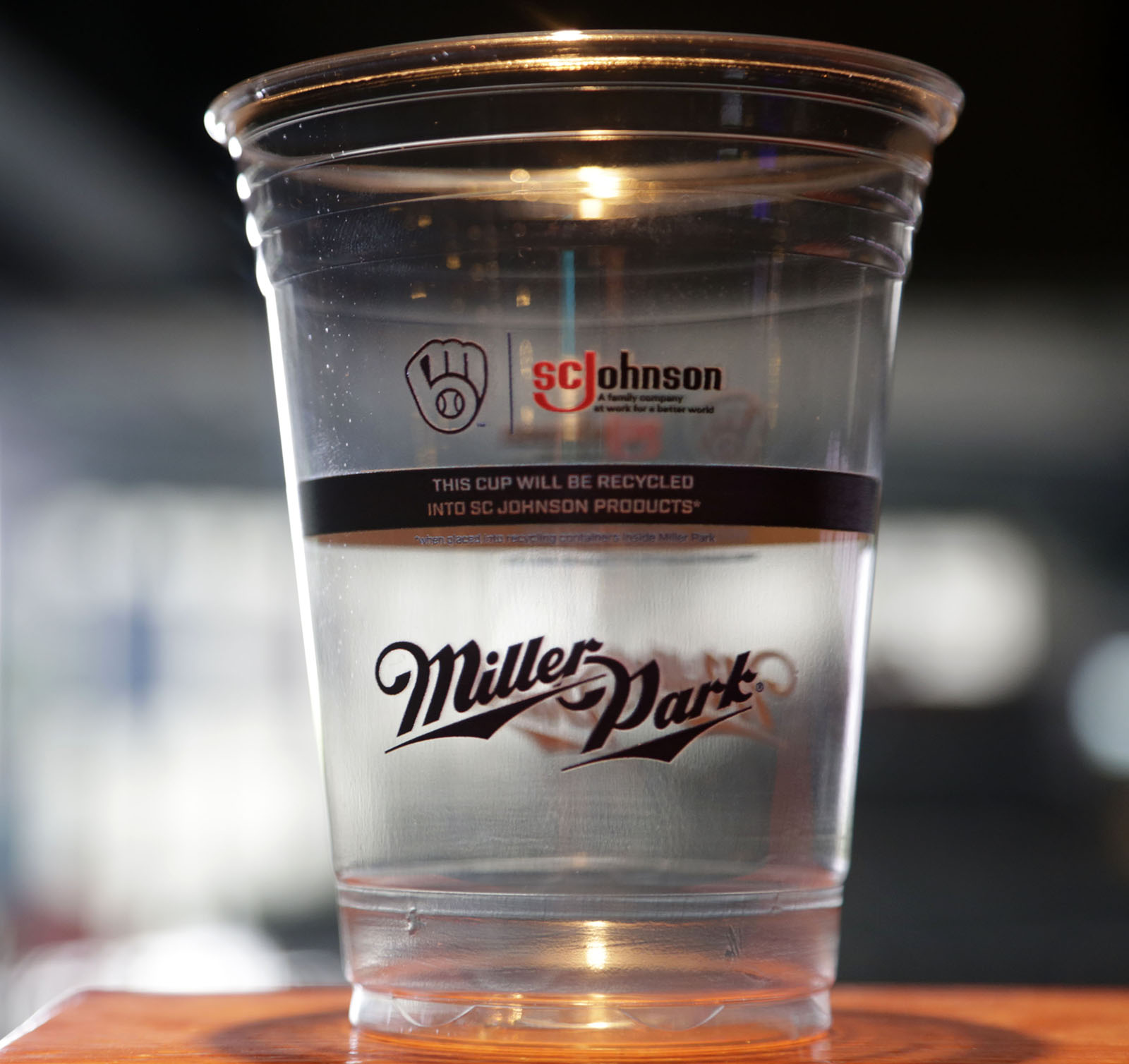 "We all need to work together to help close the plastic recycling loop, and I hope this first-of-its-kind initiative with the Brewers will serve as a model for other Major League teams, companies and even other sports leagues," said Fisk Johnson, chairman and CEO of SC Johnson, who notes that in addition to using recycled plastic, the Racine-born company has also been working to reduce plastics in its products and to create compostable plastics.

Though it has long used post-consumer recycled plastic, since 2015, SC Johnson has used 100 percent of that material for its Windex product line. The company’s products also include compostable plastic bags, reusable silicon bags, recyclable paper bags and concentrated liquid refills.

"I am excited that the Brewers and SC Johnson are teaming up to bring greater awareness to important issues like recycling and ocean plastics," said Brewers pitcher Brent Suter, who has BS in environmental science from Harvard University, and launched Strike Out Waste last year as means to reduce plastic use among players at the stadium and at home.

"We can all make a positive impact in our homes, our communities and with this program in place, we can now make a direct impact at the ballpark."

Among the other initiatives on which the Brewers and SC Johnson will partner this year include special "Clean Up Days," "philanthropic contributions with select players for heightened education and awareness," and a program in which SC Johnson will make a donation to Players for the Planet for each save recorded by a Brewers reliever.

Players for the Planet works to reduce plastic pollution in the earth’s oceans.

"This sets a great example for sports and business industries to pause and evaluate the traditional mindset of the ‘take, make, consume, and throw away pattern,’ and move toward a zero waste circular economy."

Brewers On Deck canceled for 2021