Welcome back, Go-Go: Carlos Gomez's top 10 moments as a Brewer

With the Astros in town for a three-game interleague series starting Friday night, Carlos Gomez returns to Milwaukee for the first time since he was traded last year. Here are our 10 favorite moments from his tenure with the Brewers.

Has it really only been eight months since he was traded away? It seems like so long ago. Those halcyon, hilarious days of Carlos Gomez making jaw-dropping catches in center field, feeling powerfully sexy in the cleanup spot, swinging so hard at the plate that he knocks himself down and generally being one of the weirdest, most wonderful and exciting Brewers players in recent memory.

How the time flies – like Go-Go, racing maniacally around the bases, clutching his ever-precarious helmet to his infinitely incomprehensible head, after one of those towering home runs that seemed never to land.

The Brewers dealt Gomez, along with pitcher Mike Fiers, to the Astros on July 30 last year, part of their mid-season teardown (they traded five veteran regulars) that prefigured the team’s current rebuild. It was an understandable and expected move; it was also quite possibly a prolific move, given the bounty of prospects Milwaukee received from Houston – outfielders Domingo Santana and Brett Phillips, pitchers Josh Hader and Adrian Houser, all of whom could become impact major leaguers.

Still, Gomez, a passionately polarizing player but one beloved by teammates and those fans that enjoyed his unique style and temperament that flouts austere baseball convention, has been sorely missed. Especially now, during this season that’s projected to be bleak as the organization focuses on the future, Gomez’s antics and outsized personality – not to mention his exceptional talent – would dramatically perk up both the clubhouse and the fan base.

Crusty old-schoolers have grumbled that he’s a showboat who doesn’t play the game the right way. Yes! Absolutely. Gomez has always played the game the only way he knows how, and, for a performer and an entertainer, it’s the best way. But here, grandpa, have another Werther’s.

With the Astros in town for a three-game interleague series starting Friday night, Gomez is returning to Milwaukee for the first time since he was traded to the American League pennant contenders. In celebration of Go-Go being back at Miller Park – and we all remember how much he loves celebration – here are our 10 favorite Carlos Gomez moments and memories from his years with the Brewers. 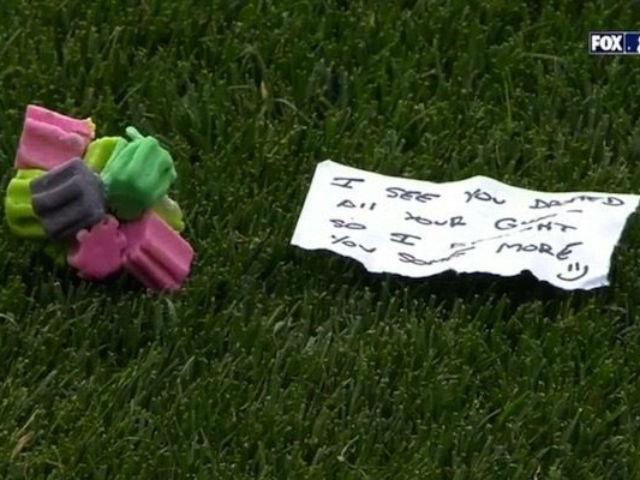 One of the all-time wackiest Gomez antics. Before he was traded last July, during a game against Cincinnati, the Brewers’ center fielder left a gift in the outfield for his Reds counterpart, Billy Hamilton. It was a big ball of chewing gum, multi-colored and stuck-together, with a note that read, "I see you dropped all your gum so I brought you some more :)"

Naturally, Hamilton burst out laughing when he saw the present, and it’s easy to imagine Gomez considering it one of his greatest accomplishments. 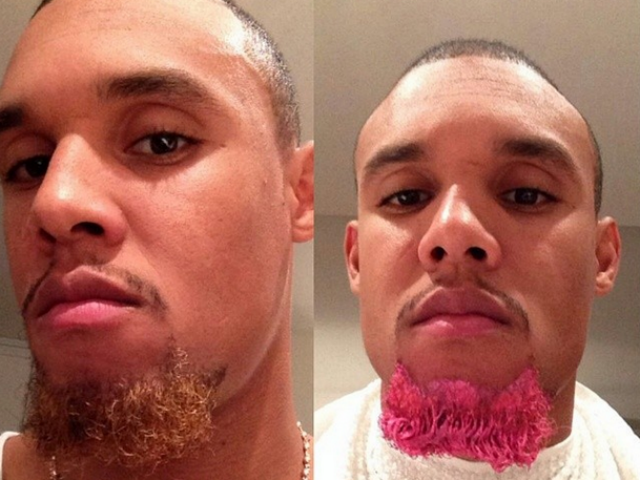 Many players pay tribute to their mothers and help benefit the Susan G. Komen for the Cure Foundation by using pink bats on Mother’s Day. Well, Gomez goes all-out on Mother’s Day, using a pink bat, wearing pink wristbands, a pink necklace and, in 2014, even dyeing his goatee pink.

Another opportunity for Gomez to draw attention to himself, some detractors complained at the time. Sure. And an opportunity to raise even more awareness (especially when the story went viral) for breast cancer, recognized and taken advantage of by the big-hearted and fun-loving Gomez.

Gomez was having the defensive season of his career in 2011, among the league leaders in range factor and fielding percentage, when one of his increasingly regular highlight-reel catches came with a painful price. In late July against Arizona, Gomez laid out to make an inning-ending diving catch, but in the process fractured his left clavicle.

He was placed on the disabled list and was out until September. After he returned, though, he helped the Brewers make the postseason, where he batted .357 with a home run and was at the heart of one of the biggest plays in franchise history.

In the decisive Game 5 of the 2011 National League Division Series against the Diamondbacks, with the game tied, 2-2, in the bottom half of the 10th inning, Gomez reached base on a one-out single to give the Brewers hope. He then stole second to put the winning run in scoring position.

And then, after Nyjer "Tony Plush" Morgan drilled a 2-2 pitch back up the middle, Gomez sped 180 feet and crossed home plate to win the Brewers’ first playoff series since 1982. The team piled on top of Gomez and Morgan in celebration. Afterward, Ryan Braun said, "Nobody's throwing out Carlos Gomez in that situation. Nobody."

Gomez had by far his best season in 2013, putting up career highs in nearly every offensive category, with a .284 batting average, a .338 on-base percentage, 27 doubles, 10 triples, 24 homers, 80 runs scored, 73 RBI and 40 stolen bases. Defensively, he led the league in putouts and took away five home runs, winning the National League Gold Glove award for center field.

He finished second in the NL in Wins Above Replacement (WAR) with 8.4, behind only pitcher Clayton Kershaw and earned some votes for Most Valuable Player. It was a season where his production finally confirmed his potential.

But near the end of that great season, on Sept. 25, the Brewers were battling the Braves, and Gomez showed the fiery side of his talented-but-temperamental persona. After hitting a homer and as he was trotting around the bases, Gomez shouted at Atlanta pitcher Paul Maholm, whom he thought had purposely thrown at him in a previous game.

When Gomez rounded third, indignant Braves catcher Brian McCann was waiting for him, intentionally blocking his path to home plate. The two immediately started jawing at each other and the incident incited a brawl between the teams. Gomez was given a one-game suspension, but it was worth it because McCann is the worst and, if you don’t want trouble with Gomez, then don’t let him homer off you.

Having said that, sometimes Gomez wants to make trouble even when he doesn’t homer. During a game against the Pirates in May 2014, Gomez launched a Gerrit Cole pitch deep into center field that he initially thought was gone. As was his wont on home runs, Go-Go flipped his bat and watched the moon shot for a secon. Unfortunately, the ball hit the outfield wall instead of going over it, but the sprinting Gomez still managed to reach third base safely for a triple. Pittsburgh didn’t appreciate the grandstanding, though, and both Cole and Travis Snider got in Gomez’s face about it.

Amid the confrontation, Gomez took a swing at Snider, unsurprisingly sparking a brawl, during which Brewers backup catcher Martin Maldonado punched the Pirates' outfielder in the eye. Both Maldonado and Gomez ended up with suspensions, and the latter used his three-game ban to rest a back injury he suffered a few days later. Savvy.

Ah, the infamous anecdote from Gomez’s Sports Illustrated profile. In the 2014 article, Braun relayed this incredible nugget of insight into the mind of Carlos Gomez, who the previous offseason had signed a three-year, $24 million contract (that turned out to be a major bargain for the team):

"[Braun] says that recently Gomez informed him, while holding a plate full of kiwi, that the fruit had three times as much potassium as bananas. "I asked him how he heard it," Braun says. "He told me, now that he's wealthy, he's been Googling rich-people conversations so he knows what to talk to wealthy people about, and he came across that data."

Priceless. Perfect. Pure Go-Go. And, hey, the more you know!

Never lacking for self-confidence or the words to describe it, Gomez, throughout his tenure in Milwaukee, felt "sexy." At various times, Gomez said he felt sexy in his tight uniform pants, sexy batting in the cleanup spot in the Brewers’ lineup, sexy after a trade to the Mets fell through, sexy because he wasn’t injured and, undoubtedly, sexy pretty much constantly and always, no matter what.

Asked whether he's hurt, Carlos Gomez said, "I don't have no problems. I'm playing, and I feel really sexy about it." — Adam McCalvy (@AdamMcCalvy) July 30, 2015

For all the outrage and resentment, fair or unfair, he produced with his actions on the baseball field, the prized, treasured moment of Gomez’s Brewers stint took place in the stands. After a few previous interactions with 15-year-old Jordan Hynum, a fan from Fort Atkinson, in which he spoke with her family, signed items for them and threw a ball to her from the outfield, Gomez made her a viral sensation early in the 2014 season. On Carlos Gomez Bobblehead Day at Miller Park, the endearing center fielder was signing autographs for fans before the game when he spotted Hynum wearing his jersey.

After she shyly waves hello, Gomez walks over, leans in and gives her a hug. Hynum bursts into tears, and Go-Go gives her another hug. After the game, a loss to the Cubs, Gomez said, "She just started crying. It was like she couldn't breathe. I said, 'Hey, take it easy, I'm here.’" It was a side of Gomez that many around baseball didn’t know about, and a precious scene Brewers fans will never forget.

What's your favorite Carlos Gomez memory? Did we forget one? Let us know in the comments!