In mid-June, the City of Milwaukee opened the application process for businesses to expand seating to sidewalks and parklets to accommodate customers during the pandemic. Among the applicants have been a few local craft breweries aiming to boost their taproom sales during a challenging time.

In mid-June, the City of Milwaukee opened the application process for its Active Streets for Businesses program that allows businesses to expand seating to sidewalks and parklets in parking lanes in order to accommodate customers during the coronavirus pandemic.

So far, the response doesn’t seem to have been overwhelming, according to City of Milwaukee Department of Public Works spokesman Brian DeNeve.

"DPW, the agency that facilitates Active Streets for Businesses, has approved 15 businesses in the program," he told OnMilwaukee. "There are still a number of others currently in review."

Among the applicants have been a few local craft breweries aiming to boost their taproom sales during a challenging time.

One brewery parklet has been installed at Black Husky Brewing, 909 E. Locust St., in Riverwest, where the taproom has limited seating and there’s also a small patio.

"We take the health and safety of our staff and our customers extremely seriously," reads a Facebook post on the brewery’s page. "We have taken measures to help mitigate the spread of the virus while still trying to offer people a way to return to some semblance of normalcy.

"Currently we offer primarily outside seating in our newly completed parklet and beer garden! The umbrellas arrived and we can now offer shade as well! We have very limited inside seating, well below our permitted capacity."

According to co-owner Toni Eichinger, the addition seating is helpful, though so far not a game changer.

"Regarding the parklet, we’re not killing it, but it does help," she tells me. "To be honest, it’s not about the revenue, it’s about some sense of normalcy. Last week we had a handful of people sitting in the beer garden and parklet and it made us so happy! Like there is a light at the end of the tunnel.

"We have extremely limited inside seating, mostly to manage sudden downpours. People seem to want to be outside anyway, though. We’re not sure what happens come cold weather when people don’t want to sit outside, but don’t really want to sit inside either. And we have to consider how many we are really comfortable with inside anyway and is it enough to actually be worth being open. So lots of considerations."

Over at Urban Harvest Brewing, 1024 S. 5th St., in Walker’s Point, owner Steve Pribek is working to get a parklet approved in order to augment the outdoor seating he’s had on the sidewalk for a couple years now. 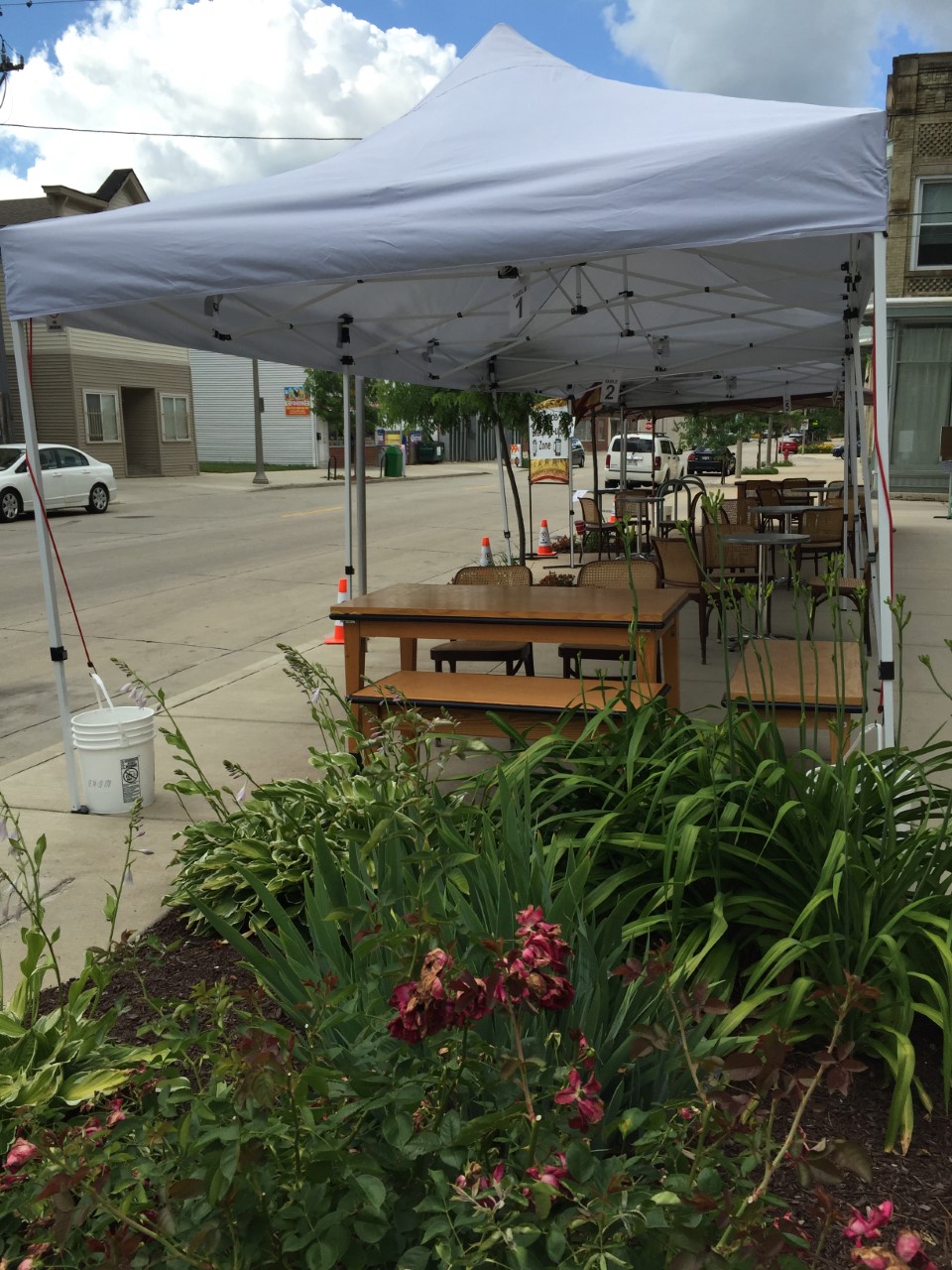 "We’ve lost a few seats as we have had to space things out to be safe," he says. "We are hoping to hear from the city about our parklet app, which should add a few seats. Right now if we want to keep the curbside pickup zone we are looking at an extra 12 (seats)."

Pribek submitted his parklet application but was missing some required measurements and resubmitted his request last week. He’s awaiting a response now.

"I would like to point out how good the city was to work with on getting the parklet approved," says Eichinger. "We worked with the Department of Public Works and they did their best to move things along quickly, address issues timely and get us up and running. Our biggest issue was actually sourcing umbrellas."

The outdoor seating and parklets will help add some much needed capacity at this small breweries for now, but that will likely change once the temperatures fall.

"The beer garden will be there until Ma Nature turns down the thermostat on us," vows Pribek.

"The parklet is permitted to be open until Nov 15, so we’ll keep it going that long for sure," says Eichinger of Black Husky’s. "Then, in working with the city, they said since it’s now approved we could submit the same or similar plan next year and have it again. We do plan to do so. I believe it can be open from Memorial Day through Nov. 15 each year.

"I need to work on my parklet flowers; they are a little lame due to late planting and my lack of a green thumb."