Rockerbox moved to Road America in Elkhart Lake after being in Riverwest for a decade. So now get ready for the first Brewtown Rumble. The street festival will feature bikes, music, food, drinks, a swap meet, custom bike contest, vending, a pin-up girl contest and more. It take place on Sunday, May 17 from 11 a.m. to 5 p.m. at Best Place.

TIn early 2014, Rockerbox – a motorcycle show, street festival and music venue that was based in Riverwest for a decade – announced it was moving to Road America at Elkhart Lake.

Shortly after hearing the news, Kevin Frank reached out to other motorcycle enthusiasts to see if they wanted to organize a similar event in Milwaukee.

"The general reaction from everyone from the beginning was ‘yes, let’s bring another free, local motorcycle festival to Milwaukee," says Barker.

After months of meeting and strategizing, the group announced that the first Brewtown Rumble will take place on Sunday, May 17 from 11 a.m. to 5 p.m. at Best Place, 901 W. Juneau Ave., and the surrounding streets, known as "the brewery" neighborhood.

"People with or without bikes are welcome," says Frank.

Frank says that although Center Street was a great location for Rockerbox, he immediately thought of Best Place when he started to visualize a new event.

"We wanted a new perspective, a new venue and Best Place is perfect," says Frank. "It makes sense to have a vintage motorcycle festival surrounded by the vintage buildings. To me, it’s a neighborhood that equals what we do with our motorcycles – it’s an area that has been heavily recycled, much like we’re doing with our bikes to keep them going."

Another selling point is that the neighborhood which is about four square blocks – is very open, not residential and features a variety of eating, drinking and lodging options such as Best Place, Jackson Pub and the Brewhouse Inn Suites.

Frank says the importance of having a motorcycle festival in the city of Milwaukee is important to riders for many reasons, including that a lot of Rockerbox attendees have smaller bikes that they couldn’t ride to Elkhart Lake and they would have to trailer them instead.

The Brewtown Rumble is presented by the Badger Heritage Chapter, Wisconsin’s Chapter of the Antique Motorcycle Club of America, and Best Place. Sponsors of the event, so far, include Pabst and the Harley-Davidson Museum.

All of the proceeds from the show will go toward Build Moto Mentor Program that provides vintage bikes to teams of teens who strip the bikes, rebuild and then race at Road America.

Many of the organizers of Brewtown Rumble worked at Rockerbox in some capacity.

"I helped with setting up tents, the stage – really anything that needed to be done – and it was a really cool, fun, local event. It got bigger and bigger every year and it outgrew the street," says Alexander. "So, it’s time to shake the Etch-a-Sketch and do something else local and new." 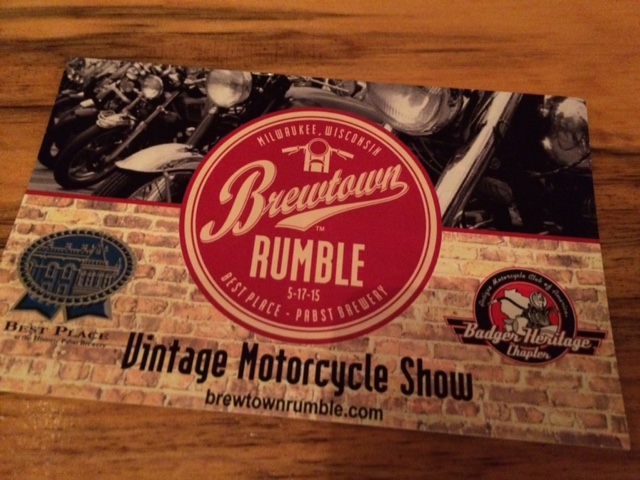 "Scott’s a great guy. He said he'll be happy to attend and not have to work at it," he says.

The Brewtown Rumble organizers plan to keep it "very local" and to hire almost entirely Milwaukee vendors and musicians. Food and vendors that would be a good fit with the biker lifestyle / culture are welcome to apply to participate.

Rockerbox took place at the end of the summer, whereas Brewtown Rumble will kick off the biking season. The dealers involved with the show appreciated it was scheduled on a Sunday because most of them are closed and can easily attend and participate.

"It’s a good time for people to expose what they did to their bikes over the winter," says Frank.

Everyone is, of course, hoping for a warm, rain-free day.

"This group of people is pretty hardy, though," says Barker. "Regardless of the weather, we’ll come out."

Tylla, who also volunteered at Rockerbox in past years, is chairing the music committee for Brewtown Rumble and has booked (so far) three bands: the Grovelers, Crazy Rocket Fuel and Doghouse Flowers.

Many of the organizers are involved with Badger Heritage and MilVinMoto. These groups have planned many informal events in the past, including an Evel Knievel ride and a Mad Max ride which included dressing up in costume and riding around to a variety of destinations.

The weekend leading up to the Brewtown Rumble on Sunday includes the release of the new Mad Max movie, "Mad Max: Fury Road," on Friday, a pre-party at the Harley-Davidson Museum on Saturday, May 16 from 5 to 9 p.m. and possibly another Evel Knievel ride on Saturday as well.

The Brewtown Rumble is family friendly and welcoming of all types of bikers. According to Frank, the festival is also ideal for anyone who has always wanted to ride and / or considered buying a bike.

"This is a good opportunity for someone who’s interested in riding a motorcycle and never done it before to see the different brands and understand the advantages of owning a newer bike versus an older bike in terms of cost and upkeep," says Frank.