A new pop-up chef collaboration is shaking up the local pizza landscape with a sourdough crust and fresh simple ingredients that aim to take America's favorite comfort food to a whole new level.

A new pop-up chef collaboration is shaking up the local pizza landscape with a sourdough crust and fresh simple ingredients that aim to take America’s favorite comfort food to a whole new level.

Brute Pizza & Tasting Kitchen is the name of the pop-up concept which launched in July, offering a weekly selection of freshly baked pizzas for pick-up at a variety of locations around the city.

Behind the brand are two accomplished chefs: Jackie Woods of Donut Monster and Paris Dreibelbis, most recently of Bacchus. Both come to the table with years of fine dining experience, including shared time working at Ardent on Milwaukee’s East Side. And their backgrounds have a definite impact on how they approach their pizza.

"It’s about making the best pizza we can make," says Woods, noting that the pop-up model allows for a gradual and deliberate refinement of the recipes in preparation for a more official launch. 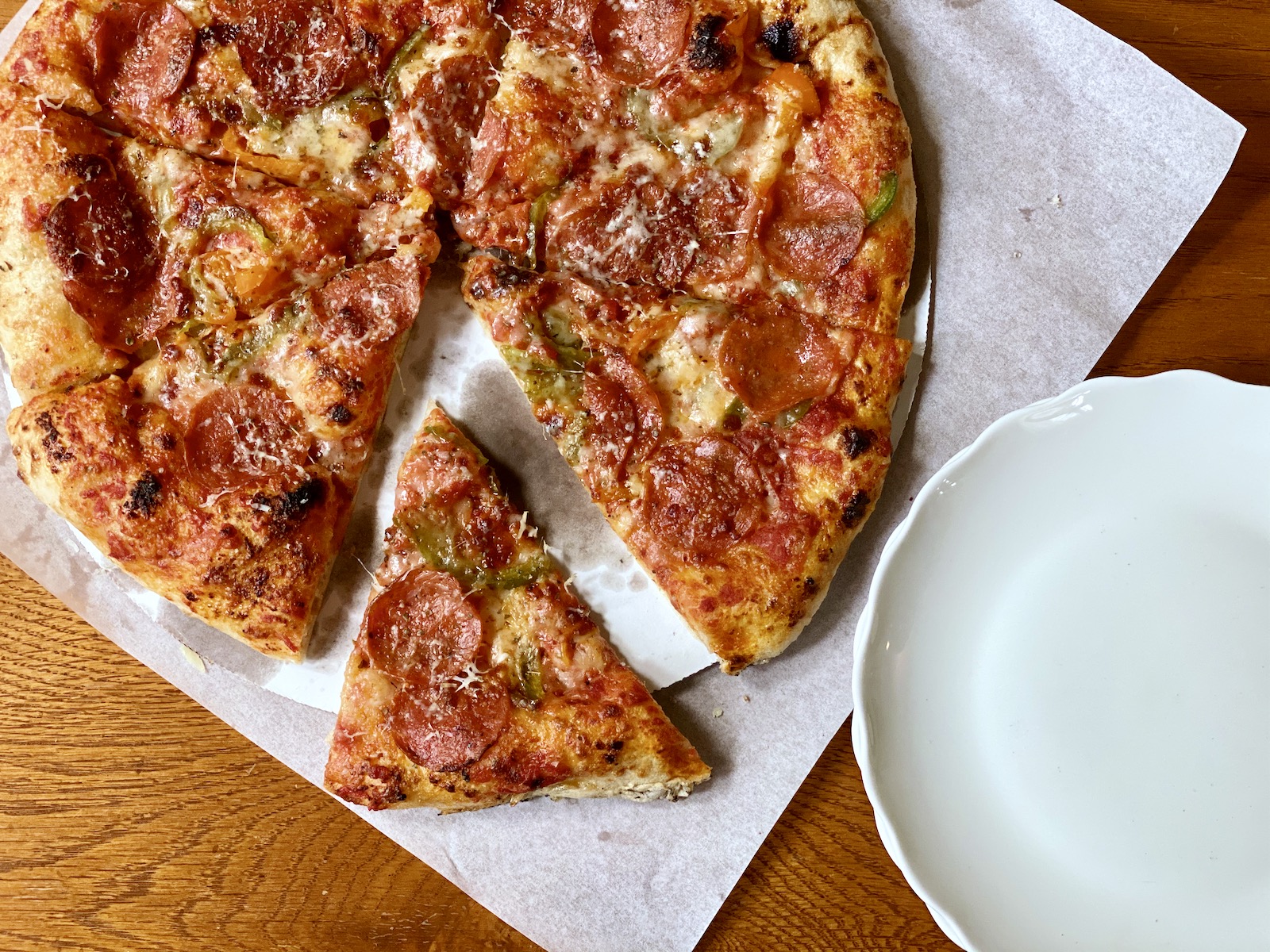 Pushing the boundaries of pizza

Woods says he started experimenting with pizza about a year ago, after he got a pizza oven for Father’s Day. "I love pizza. So, I bought a few books and started testing out recipes."

As he played around with recipes, including sourdough, he says he never quite found one with which he was truly happy. So, after the COVID-19 pandemic hit, Woods says he reached out to Dreibelbis, a friend and colleague with whom he’d launched a series of tasting menu style pop-ups in 2019.

"As fine dining came to a halt, it made sense to turn in another direction," says Dreibelbis, who says he was excited by the thought of working with Woods again. "He’s one of the only people I’ve worked with who really wants to push things forward and not just take the easy road."

The two started brainstorming ideas. As they talked, they realized that Brute would make an ideal companion business for Donut Monster, which is one of the restaurant concepts slated to be a vendor in the 3rd Street Market Hall Downtown. The idea, says Woods, would be to serve doughnuts in the morning and shift to a pizza business later in the day.

When the question arose of what to call the business, Woods says they went with a fun name that simultaneously captured their collective culinary philosophy.

"I had a giant list of names and some of them were awful," says Woods with a chuckle. "But Brute was fun, and it resonated with me. I really liked the idea of savagely attacking something… really going for it and being all in."

"That’s where the logo of the lion comes in," adds Dreibelbis. "The lion is the brute, the king of the jungle. He’s standing atop the pizza. It’s a symbol for how we work. We’re always pushing, and we’re not stopping until we’re the best at what we do."

It’s all about the crust

The foundation for any pizza is the crust. And for Woods and Dreibelbis, that meant zero-ing in on the qualities they wanted from their ideal pizza.

Inspired by the work of Chef Christian Puglisi and his crew at Bæst in Copenhagen, Denmark, they began focusing on their recipe for a sourdough crust in April, testing batch after batch and plowing through over 100 pounds of flour before settling on the current recipe.

"As we were tasting through doughs, there were some that came out like white bread with condiments on it," says Dreibelbis. "But our goal was to create a dough with real character, something with a full flavor and great texture."

Ultimately, says Woods, they wanted to create a hybrid of sorts, a dough with the chew of a Neapolitan crust (but not the soggy middle), the breadiness of a New York style pizza and the crispness of a thin crust.

To get there, Dreibelbis focused on developing a sourdough levain (starter). He tested a variety of flours, noting both their flavor and hydration profiles, and eventually settled on a combination of three locally milled flours from Lonesome Stone Milling in Lone Rock, Wisconsin.

Once made, the sourdough is subjected to cold fermentation for a period of two to three days before being formed and baked on a stone in an 800-850 degree oven.

To start, the partners chose a Gozney Roccbox, a portable restaurant-grade pizza oven equipped with a thick stone floor and an operating temperature that can reach up to 950 degrees.

The result is a soft, light crust with a moderate chew that showcases a notable exterior crispness and a complex flavor that capitalizes on the assets of the sourdough fermentation.

"We created the recipe for the Roccbox," says Dreibelbis, "Largely because it was portable. But ultimately, we’d like to move forward with a wood-fired oven. So, at some point we’ll have to mess with the hydration levels to make that work."

The opening menu for Brute has a few consistent players, all of which focus on simple, fresh ingredients, many of which are locally sourced. 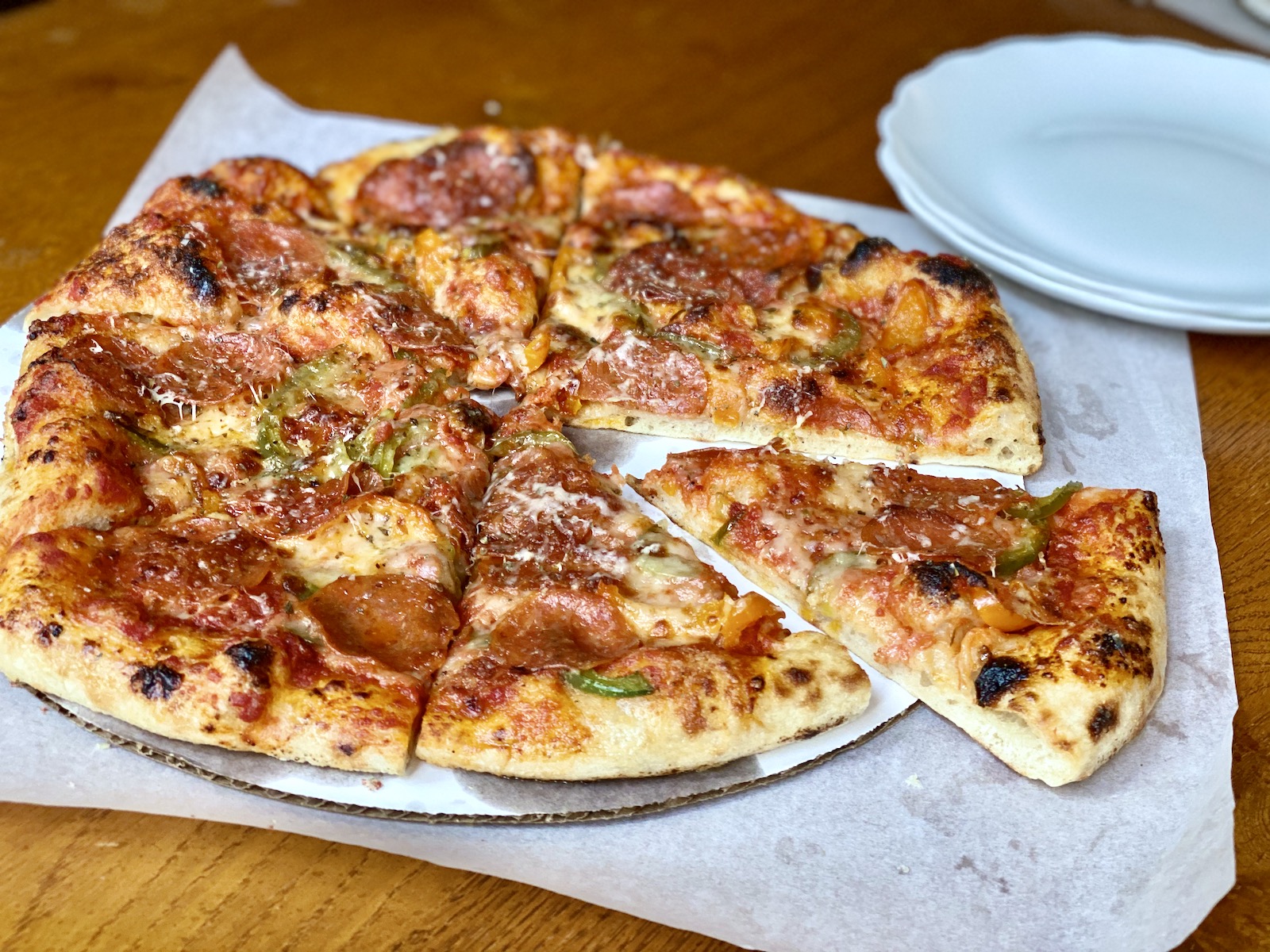 Each one is dependent on deceptively simple ingredients like tomato sauce and cheese. But, as you might expect, neither were an afterthought.

"We had a lot of discussions about the ideal sauce," says Woods "Out of season tomatoes just don’t taste good. But we really wanted to create a fresh tasting sauce. That meant starting with a really great tasting canned tomato and cooking it as little as possible."

San Marzanos were the only tomatoes that made the cut, Dreibelbis notes. "It’s still a work in progress," he adds, "And I feel like we make strides every week."

Cheese, on the other hand, was relatively simple since Wisconsin is home to so many high quality products. But even there, the chefs thought outside the usual box, substituting Pleasant Ridge Reserve from Uplands Cheese for parmesan as a finishing cheese.

"I didn’t want to put parmesan on every pizza," says Dreibelbis. "But I wanted something that had a little bit of a funk to it. Pleasant Ridge hits the mark, and it smells amazing when you grate it over the top of a hot pizza."

There’s also a secret sauce on their signature Chefs Pizza, which is topped with tomato sauce, marjoram, olive oil and Pleasant Ridge Reserve along with garlic, anchovies, capers and… magic brush ($15). 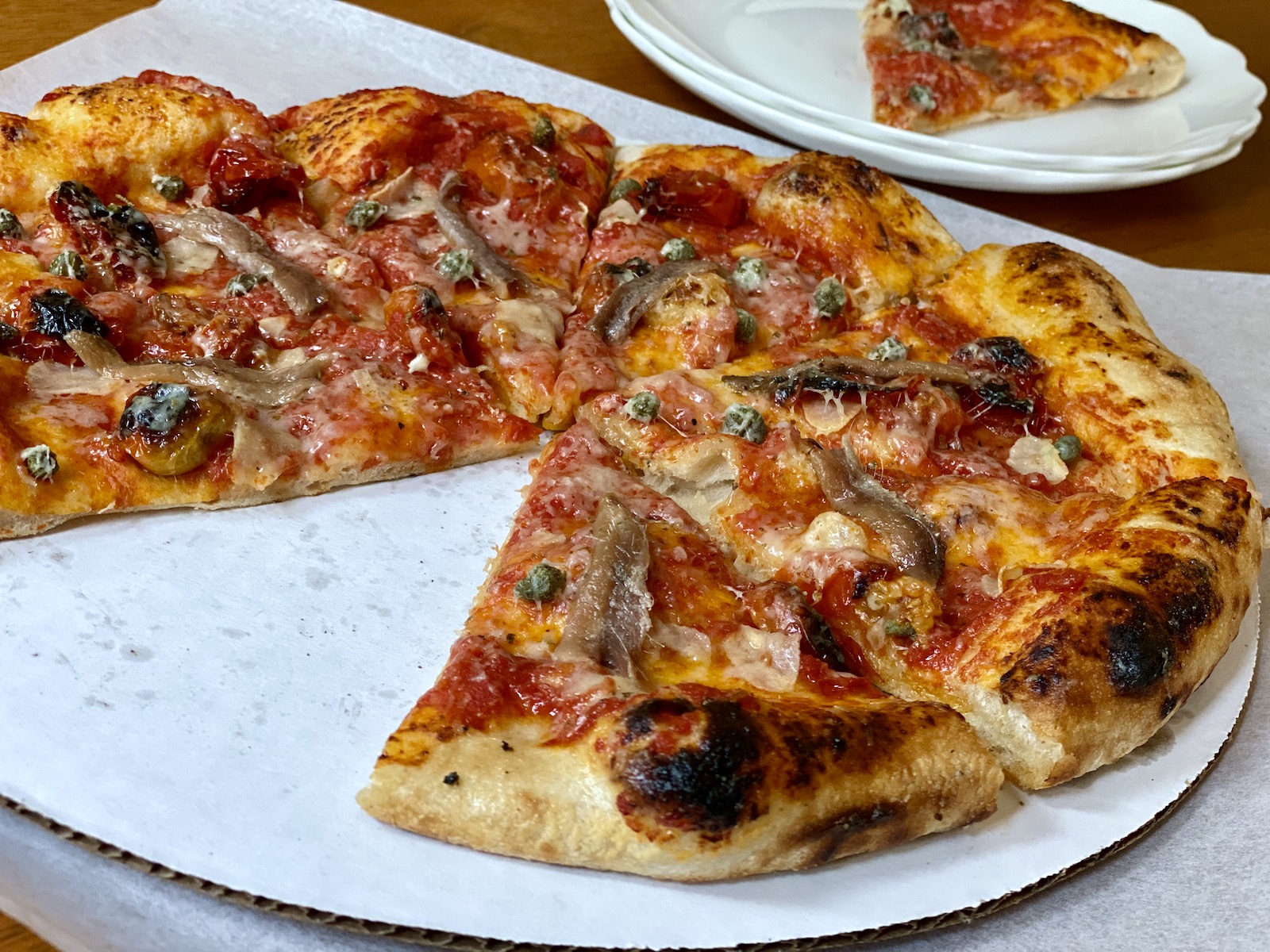 "It’s the name we gave for our secret sauce," says Dreibelbis. "It’s a mixture of reduced white soy, granulated garlic, butter, onion powder, lemon and kelp… and it gives you this really nice crisp crust and a beautiful umami flavor."

The pizza itself was one they discovered while playing around with ingredients one day.

"We both really liked it," he says. "And peoples’ experiences with anchovies on pizza are so mixed. We decided to show them how good it could be when you use really high quality anchovies." 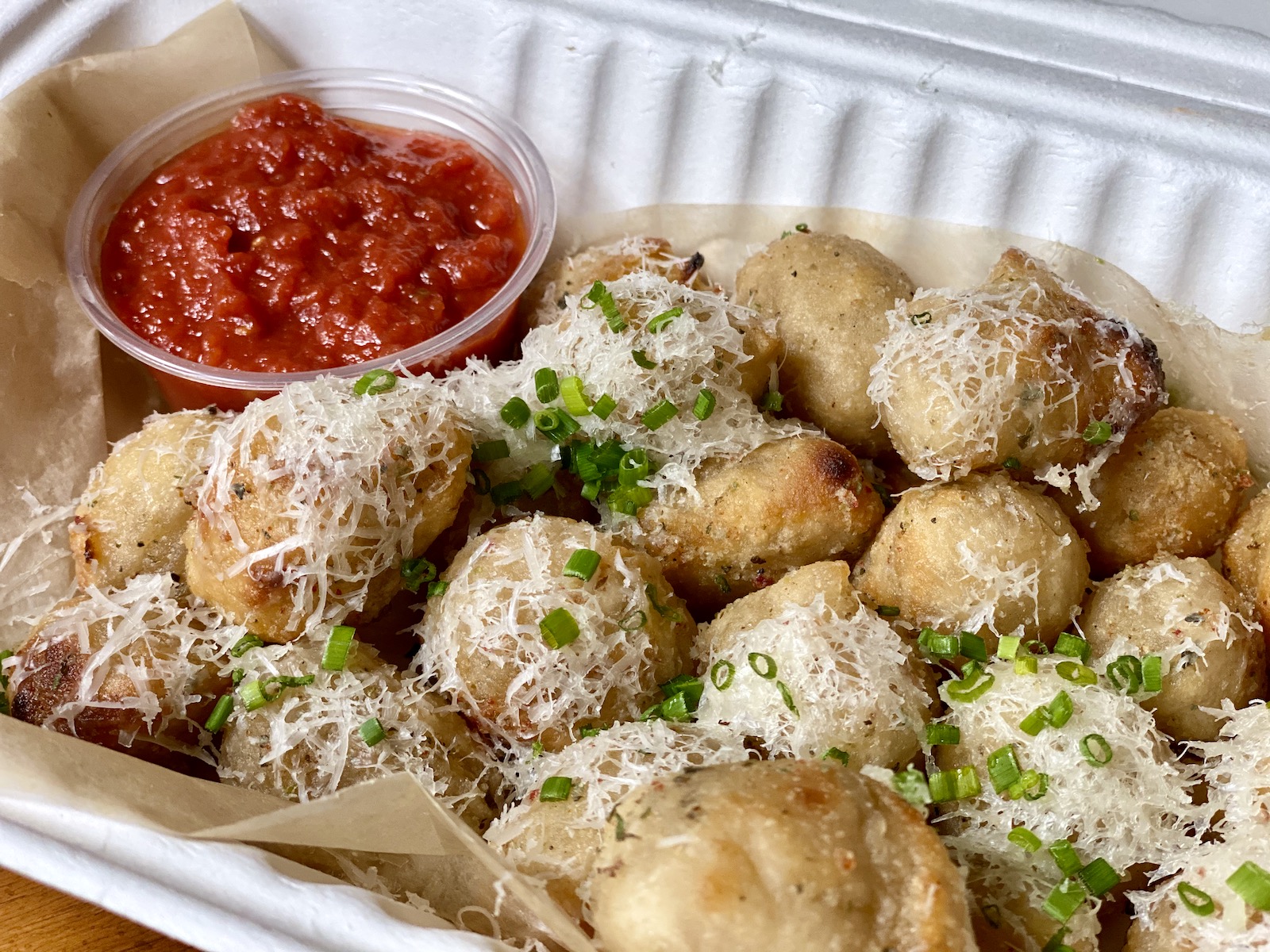 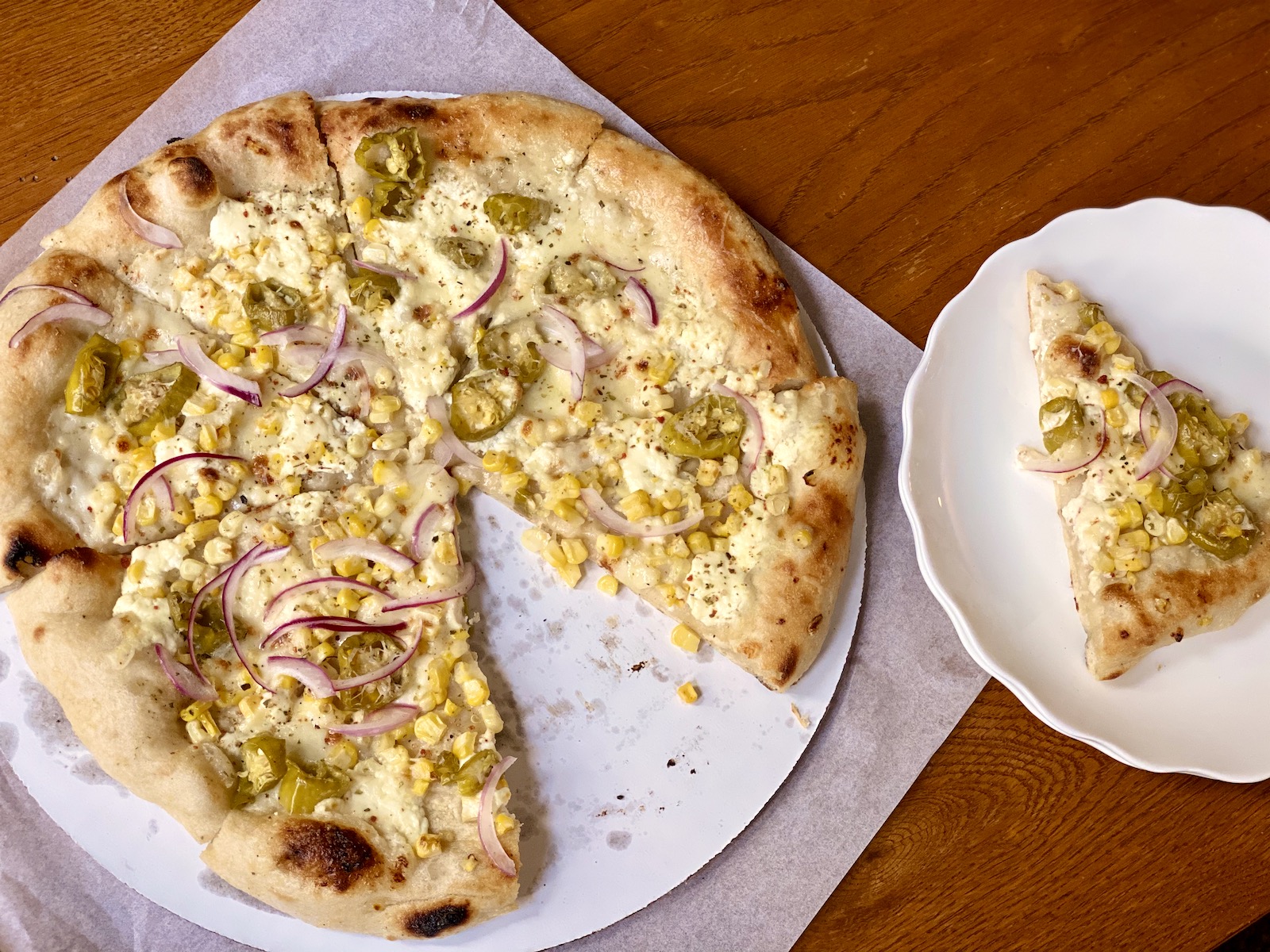 "We’re using this pizza to vet some new ideas," says Woods. "Some might stick. Others won’t. That’s what pop-ups are all about."

The best bet for eating any pizza is to consume it just after baking. But with a pop-up (or any type of carry-out or delivery pizza), that’s just not possible.

But, there are some tricks that ensure you get a far better pizza experience at home.

You can find more detailed instructions in this article, which includes a number of useful tips I gleaned from a good friend and pizza expert.

Best of all, they’re tricks that Dreibelbis and Woods say they highly support.

"We tried selling our pizzas to customers uncut for a while in the beginning," says Woods. "But most people thought it was really weird. We finally gave up because it was too hard to explain it to them. But it’s definitely a good idea."